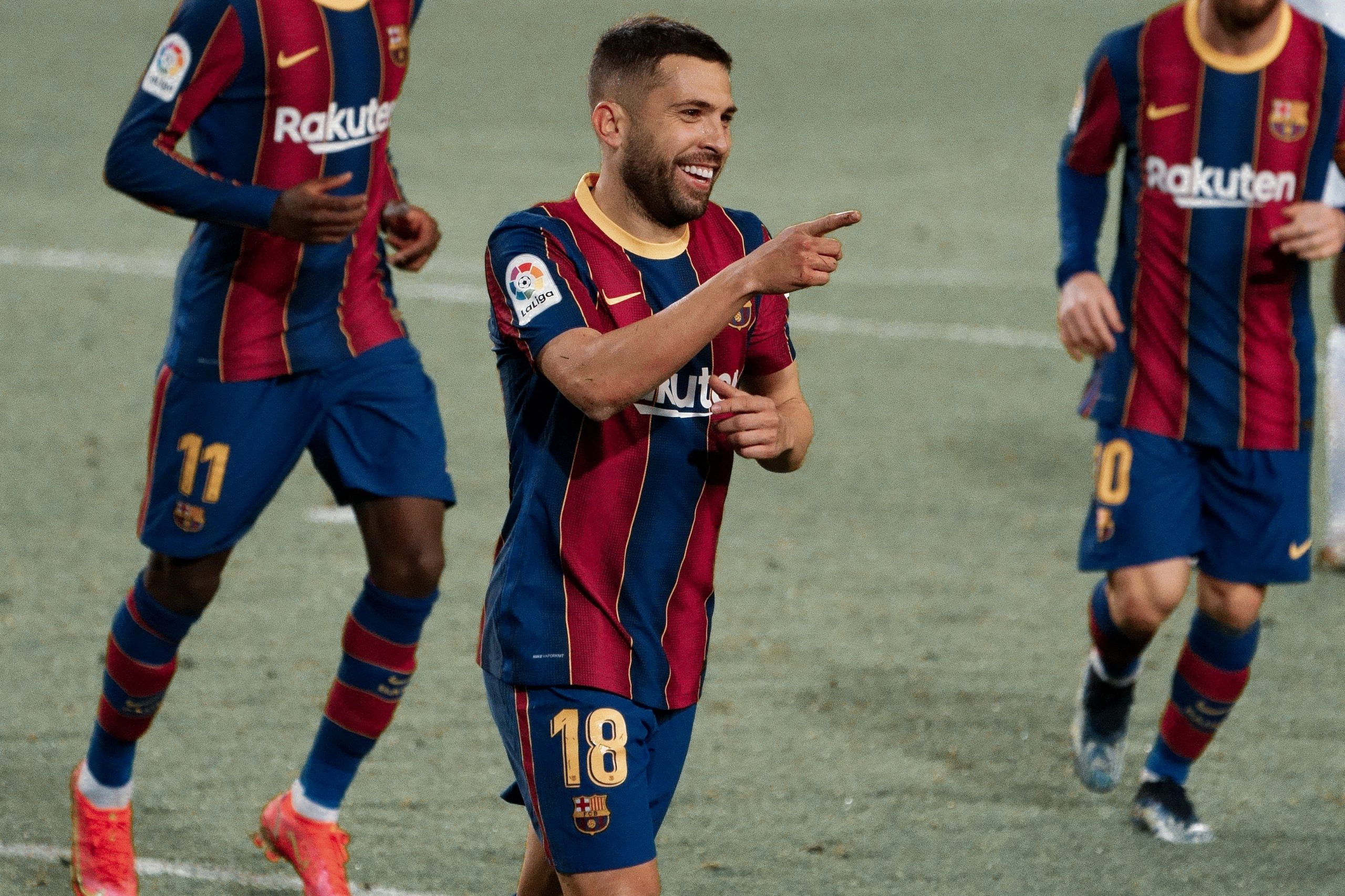 The 2020/21 season was one that started at the brink of turmoil for Football Club Barcelona. The combination of a mismanaged sporting and financial project, declining level of football in the first team, three Champions League humiliations, and the Lionel Messi transfer saga had left the Blaugrana in complete shambles. A few transfers both in and out of the club, and a bright initial start for Ronald Koeman, had left scope for a small bit of hope at the end of the tunnel for some – if not all – Cúles. However, the lightning struck again, with the Catalan club midway through November into what was seemingly another crisis.

Amidst all the turbulence, it seemed Jordi Alba’s situation was no different. He had a torrid start to the season, leaving many defensive displays to be forgotten. It seemed with age, he was becoming increasingly worse for wear. Nearly 32, the fans’ patience with Alba was running thin, with many demanding a replacement whenever possible. What most fans didn’t know, however, was that there was a twist in the tale yet to come, a twist that would soon be hailed as an extremely welcome one.

Fast forward to March 2021, the Spanish fullback is having the season of his life, outperforming all previous statistical metrics and truly living up to his wonderful nickname ‘El Ferrari’. With a change in system to three at the back, Alba has been afforded more time and freedom to maraud the left flank with all the danger in the world.

Apart from just a change in the system, it is the team’s physical preparation, mental recuperation, and synchronization that have benefitted Alba the most. All these improvements can be attributed to the committed Ronald Koeman and his coaching staff. Beyond all external changes, it is the Spaniard’s confidence: his readiness in take-ons, confidence in passing under pressure, and frankly unreal level of decisiveness in the final play that have allowed him to find the player he always has been underneath. A world-class left-back, a true Barcelona legend who has returned to the fore with his immense offensive abilities.

The marauding fullback’s end product in and around the goal has improved tremendously. In just 38 games, he has already scored five goals and assisted twelve, scoring 0.15 goals per 90 and assisting 0.33 per 90. This is a huge improvement to his last season’s minuscule two goals (0.06 per 90) and 9 assists (0.22 per 90). His end product has almost doubled, increasing immensely with his decisiveness.

Further, the Spaniard’s expected stats in all departments have improved immensely. In short, expected stats is a revolutionary statistical metric that explains how well a player should be performing. For instance, in La Liga, Alba’s xGBuildup90 — a metric that measures all the attacking actions of a player per 90 except key passes or shots — has improved from 0.56 to 0.64 from last season. His xGChain90 — the same as xGBuildup but inclusive of shots and key passes — has improved from 0.68 to 0.83. Even his expected assists have increased from 0.20 to 0.27. Therefore, not only has his attacking output increased, even his general impact on buildup play and overall performances have become better. Alba is much more definitive this season.

It seems the marauding fullback is becoming more mature with age as his passing has also improved greatly. For instance, his key passes per 90 have improved from 1.24 last season to 1.61 this season. The Spaniard has also become more direct and offensive with his passing, increasing his progressive passes from 5.46 to 6.81 per 90.

He is having a larger hand at the team’s offensive play. In tandem with this, his completed passes into the 18-yard-box have also greatly advanced from 1.45 to 2.24 per 90. Alba’s larger presence in the opponent box can be felt even by simply watching Barça’s games this season; he just seems to be at the end of a Messi pass countless times every match.

The 32-year-old’s involvement at the end of attacking moves have also developed nicely this season under Ronald Koeman’s guidance. His shot-creating actions — movements or passes that lead to a shot — have increased from 1.91 to 2.88 per 90. Similarly, his goal creating actions – moves that have led to goals – have increased from 0.21 to 0.37 per 90. Alba’s offensive impact has undoubtedly improved, to the point where the left-flank is Barça’s most used lane of attack; without Alba, the Blaugrana lose tremendous width and offensive ability. However, how have his defensive contributions changed from last season?

The Spaniard has become a more complete player this campaign, improving both defensively and in possession. His tackles and interceptions have increased from 2.06 to 2.33 per 90. Alba has also become increasingly reliable under pressure, averaging 96.1 touches per 90 – compared to last season’s 92 per 90. He is also more direct in his approach, averaging 5.36 progressive carries with the ball per 90, compared to last season’s 5.35.

So, it seems clear that Alba has improved tremendously across all departments of the game this season. But why exactly has he improved? What are the factors that have led to the ageing Spaniard showing a more daring version of himself? For starters, one of the main reasons is a change of system. More often than not, Barça are employing a three-at-the-back system rather than four. This has liberated Alba and stripped him of defensive duties that were bogging him down. Concurrently, Alba has looked far more dangerous; however, his improvement is beyond just a change of system.

When Barça were in what seemed like another crisis, Ronald Koeman repeated the same statement several times: “The results will come.” The Dutchman was convinced of this for a few reasons. Under his guidance, the team had changed several things – more youngsters were being incorporated into training sessions and matches, the importance of physical training had increased, and the general level of preparation and attention to tactical detail was becoming increasingly immense under the Dutch coach.

Soon enough, the results started coming as the team started adapting to his ideas and tactics. Each member of the squad looks fitter and more in sync with each other. This level of confidence and decisiveness that has developed in the Barcelona first team due to the improved training sessions as well as inevitable good results in 2021 have been the key to Alba’s improvement this season.

Fans of the Garnet and the Blue are hoping to see more of the same – Jordi Alba’s unparalleled performances as Barça’s left-back in 2021. He has risen to the top of the heap once again, outperforming all his fellow left-backs in Europe.

Two of the best left-backs last season, Andrew Robertson and Alphonso Davies do not even come near Alba’s offensive performances, with six and three direct goal involvements respectively in 39 and 28 matches. Theo Hernandez has been a revelation, but still only has 11 goals + assits in 36 matches while Joao Cancelo has a mere eight G/A in 34 matches.

Meanwhile, Jordi Alba has outperformed them all with a tremendous 17 direct involvements in 38 matches. What seemed to be Alba’s twilight to most fans was just a hiccup in the wonderful career of this Azulgrana legend. Fans and pundits alike applaud the Spaniard for his telepathic connection with Leo Messi and his unmatched, perfectly timed runs.

We hope to see Alba at the top of his form for at least a few more seasons to come before a competent replacement is outlined. Amidst all the hate received by the European Cup winner, we wish to applaud him for his immense improvement and contribution to the Blaugrana badge this season.