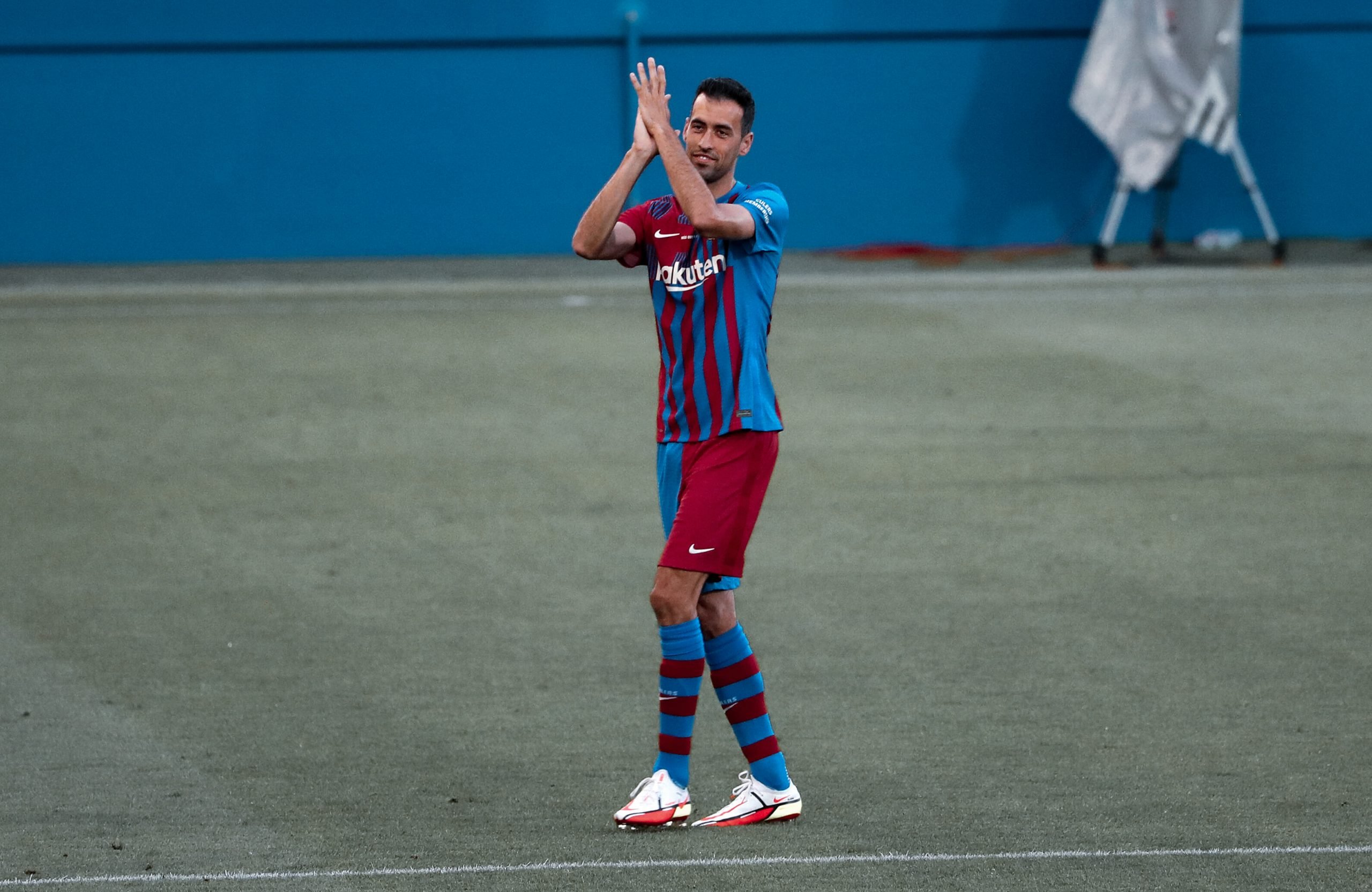 After a rather poor start to the 20/21 season, many fans had given up hope on Sergio Busquets. He struggled to fill all the holes in Ronald Koeman’s deficient midfield in the 4-2-3-1 formation, and while his initial struggles were harsh, the lesson throughout last season, upon examining Busquets, is that form is temporary, class is permanent.

After Koeman reverted to the 4-3-3, conditions in the midfield improved for the Catalonian to thrive once again. Yet one tactical revision after another led Barça’s gaffer to test out eleven formations through the course of the last campaign.

The Blaugranas’ number 5 proved it to be no problem; throughout 2021, he thrived in any context and role that Koeman required of him. Be it pressing up high on the field (as indicated by his 172 successful pressures throughout the league season, only behind Pedri), or playing in between the centre-backs as a libero, in the buildup phase.

His incredible tactical knowledge, positional intelligence, and anticipation make him an invaluable asset to any team.

How the 3-5-2 benefitted Busquets

Sergio Busquets excels in almost all contexts for his team. But his weaknesses are undeniable. The La Masia graduate is not known for his athleticism. Rather, he relies on anticipating his opponents’ motions in defensive duties. He is still deficient in pace, physicality, and reactivity. If plan A fails, it’s usually difficult for Busquets to enable a second one.

With this in mind, doubts arise about whether the 4-3-3, which will seemingly be the Dutch manager’s preferred tactical outline for the campaign, will suit Busquets too well. The predominant formation for the Blaugranas through the latter half of last season ended up being the 3-5-2, or several variations of it.

Formations such as these meant Busi had three defenders behind him at all times, and also the support of two wing-backs who operated in a fine balance between defence and attack.

On top of that, the support of two interior midfielders meant Busquets was essentially liberated to press higher upfield or even find himself exploring positions on the pitch one wouldn’t usually associate with him. While formations are simply references for tactical roles and ideas (and not deciding factors), they do, to some extent, seriously influence a player’s roles and, as a consequence, performance.

In a 4-3-3, for Barça specifically, the Spanish veteran is left with little defensive help. Due to Koeman’s team not consisting of many natural wingers, depth on the flanks is often provided by the fullbacks in such a formation. In this case, the 33-year-old is only left with two defenders behind him. Unfortunately, Barça lack the world-class defender they so desperately need to make such a formation more efficient.

With a rather shaky defence behind him and numerical disadvantages in the centre of the park, the veteran could be caught with too much space to handle by himself, far too often. To some extent, variations of the 3-5-2 offer both more relief and freedom for Busi. But even given this respite, he can simply shine even further in the 4-3-3.

A simple example can go a long way; Busquets was brilliant throughout the Euro 2020 tournament. The Spanish National Team was set up in a 4-3-3 throughout the season, playing very similar, and arguably a much higher level of the positional play, a possession-based system that Koeman’s Barça deploy.

Accompanied by many players of similar profiles, Busquets was a key player for Spain throughout the tournament, racking up Man of the Match awards on a number of occasions in the tournament.

The 33-year-old does not require dazzling skills to show his class. Instead, he uses his mastery of the simple things to do so. All he needs are the right tactical conditions to provide even more for his team. If the Dutchman can alleviate Barça’s defensive woes, the Spanish veteran’s role as the team’s primary single pivot can allow them to excel in all sorts of ways.

How Depay can be key to reinforcing Busi

Firstly, the use of Memphis Depay on the left-wing can be key in this tactical setup. Throughout the 21/22 pre-season, Culés have received a taste of how Koeman wishes to utilise the Dutch forward’s virtues. His primary role will be in his off-ball movements, given he has an excellent understanding for making runs and receiving passes upfront.

In this sense, Depay will be able to create width, creativity and runs into the box to finish chances. This will, to a small but noticeable extent, reduce Jordi Alba’s offensive duties. Prior to Depay, Ansu Fati was the only left-winger in a long time to provide permanent width for the Blaugranas, something they have been direly lacking on the flanks. With the fullbacks being the primary providers of width, defensive deficiencies become a big problem.

If Alba’s balance between defence and offence can begin to lean a tad more towards his own half, with the 27-year-old forward’s offensive outputs from the wing, a trickle-down effect is created. As a result of this effect, Busi is freer from defensive duties and can focus more on other aspects of the pitch.

A key area in which Koeman’s men must learn to excel is in the fullback department. If Sergiño Dest can learn to improve their positioning to be more defensively reliable while still offering a sound balance between attack and defence, the domino that falls means the midfielders to operate with much more freedom and confidence. Additionally, Barça’s defensive basis must be sound.

Tactical variances in the 4-3-3

While in a 3-5-2, an additional centre-back does offer more protection, the lack of defence on opposition wingers may be also created. In a 4-3-3 executed well, a more consolidated foundation exists. This is not the only benefit; such a formation allows more tactical variances too.

For example, if the game is played at a high tempo and mostly in the opposition half, Busquets as the single pivot can be deployed to supply a high press on the opponents’ midfield and defensive lines. If it is a slower game or more evenly matched between the two sides, he can plug in between the centre-backs and play as a libero; given his unmatched ball circulation, this can help Barça take back control of hard-fought matches.

Another key reason Koeman has likely chosen to revert to the 4-3-3 this season is because the offensive arsenal has a far changed look from the previous campaign. With too many talented forwards that can likely work together and compliment each others’ unique traits, it would be unwise to continue relying on wingbacks for the width, with only two forwards in front.

Depay’s (and Fati’s) runs into the box, Yusuf Demir’s ability to drop deep and cut into the box, Antoine Griezmann’s offensive versatilities mean that the Dutchman would be wasting his invaluable resources by only playing two forwards in his team.

This is not to say that every quality forward in a Barça shirt should be thrown onto the field together. But simply that a combination of three players, with several, unique options and profiles available, may prove to be a far wiser option for the Blaugranas.

Additionally, Koeman is blessed with forwards who have immense positional intelligence and technical abilities. Memphis, Griezmann, and Demir are all tactically intelligent players who can drop into the midfield and create superiorities. This directly improves Busi’s functions in the team, as his passing options and support in the centre of the park increase immensely.

In this regard, the Catalan club is much changed since the start of last season, even given its multiple other deficiencies. Intelligent, versatile forwards mean they can create danger both from offensive areas and from the midfield. Advantage: Busquets.

While the 4-3-3 does leave the team deficient of one additional defender, its several tactical variations, options to create passing triangles, and multiple offensive and midfield benefits clearly indicate that Busquets can still excel in the role of a single pivot.

Ronald Koeman surely needs to step up his game; clearly defined roles, yet the conditions to still exhibit freedom, are a must for each of the players in the starting eleven. Unfortunately, there was a clear lack of roles throughout most of last season.

However, there were promising signs nonetheless, and with the influx of intelligent midfielders and talented youngsters, we can expect the Dutchman’s tactical mechanisms to improve too.

If roles are defined more clearly and Barça’s off-ball efforts improve, Busquets can simply thrive beyond measure in a 4-3-3. Once again, formations do not determine tactics, but they can be the key enabler of the coach’s ideas. More freedom, more options, and more familiarity as the single pivot mean more chances of success for the veteran midfielder.

He certainly still possesses the several virtues that put him in contention for the greatest defensive midfielder of all time. Now, we will have to wait and see if Koeman’s tactical ideas, stringencies, and utilisation of talented players all around Busquets can help enable the last leg of his career to be one of his best.