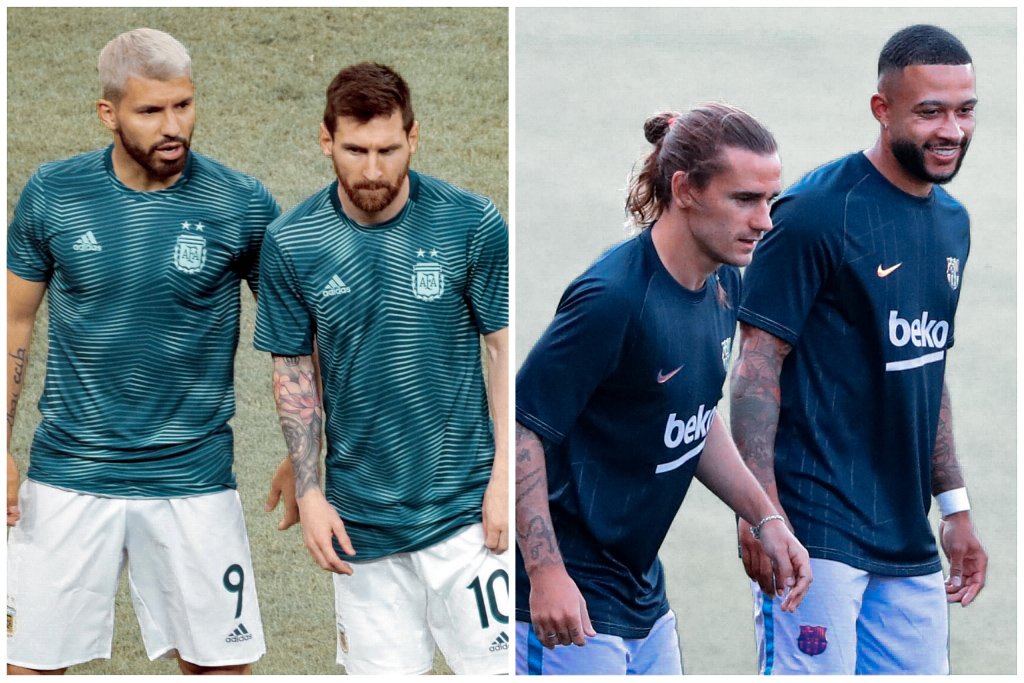 They say that too much of a good thing can, in turn, become bad. With the addition of Memphis Depay and Sergio Aguero to the roster, Ronald Koeman is faced with the daunting task of deciding who starts upfront.

From young talents like Ansu Fati and Alex Collado to world-class players like Lionel Messi and Antoine Griezmann, Barcelona is indeed stacked with talent. Competition for the various spots in the front line can help elevate performances. However, this competition might instead become a headache for FC Barcelona.

Widely considered as the best in the business, many of the players are highly reputed and respected. Each of the forwards expects to play a high number of games, and managing all their expectations is no joke. From tactics to performances, Koeman needs to analyze every minute detail if he is to extract the best out of this situation.

Given the financial situation, departures are inevitable. The club simply cannot handle the immense load that is the wage bill. Offloading unnecessary players is the main priority for Joan Laporta.

The first confirmed departure is that of Fransisco Trincao, who has been loaned out to Premier League team Wolverhampton Wanderers. The Portuguese international failed to establish himself last season, and letting him leave on loan was probably a wise decision. While he is still young and has a lot of room for improvement, it is unlikely that he will play regularly this season.

Danish forward Martin Braithwaite could be the second name on that list. He did what he was asked last season and even scored a few important goals. His signing was never meant to be a long-term one, though, and he is probably going to leave this summer.

Laporta would have preferred to sell either Antoine Griezmann or Ousmane Dembele. But the injury to the latter and the lack of potential suitors has left the club with no choice but to incorporate the two French compatriates.

For simplicity’s sake, we can set aside Martin Braithwaite since he is not expected to continue this season. We can also leave aside Lionel Messi since the Argentine is untouchable and is easily Barcelona’s best player. This leaves five players: Ousmane Dembele, Sergio Aguero, Memphis Depay, Antoine Griezmann, and Ansu Fati.

Lionel Messi would prefer to operate in the false nine position. However, he might have to play out of position given the sheer number of central players Barça has.

For our first spot, we have three main candidates: Aguero, Griezmann, and Depay. All three are remarkable players, each talented in their unique way. However, each of them has endured contrasting campaigns to each other.

Sergio Aguero, on the one hand, is one of the greatest strikers of all time. He was brought in to do just one task: scoring goals. Yet the Argentine has just come off the back of an injury-plagued campaign.

Aguero scored just 4 goals, compared to Antoine Griezmann’s 13 and Memphis Depay’s 20. Even in terms of chance creation, Aguero lagged significantly with just 0.6 key passes per 90. This is a significant decrease from both Griezmann and Depay, who provided 1.2 and 2.6, respectively.

On the other hand, Antoine Griezmann is the most settled of the three. He has been a Barcelona player for two years now and knows the ins and outs of the dressing room. Griezmann had an average season upfront by his standards.

But the Frenchman is miles ahead of the others when it comes to the defensive contributions. Depay and Aguero’s 0.2 and 0.5 tackles and interceptions per 90 respectively stand pale in comparison to Griezmann’s 1.3.

The number seven is one of the hardest-working players in the game, and his fitness is impeccable as well. He even scored crucial goals in the Copa del Rey that helped the Blaugrana to their only major trophy in two seasons.

But out of the three, the most consistent was Memphis Depay, who has been in scintillating form. He averaged a goal every 147 minutes despite having played the most number of games (37 out of the 38) out of the three. In addition, he also provided 12 assists in the league, nearly double that of Griezmann (7 assists) and leagues ahead of Aguero’s solitary. Depay was one of the best players in Ligue 1 last season and is not likely to slow down any time soon.

On the left-hand side, there are two primary options: Ansu Fati and Ousmane Dembele. While Depay is capable of playing on the left as well, he excels the most when playing as a centre-forward. Thus he can be excluded from this comparison.

Fati and Dembele have a common issue that might bring their playtime down. Both players have a history of long-term injuries, though the situation is far worse for the latter, now set to miss nearly half the season.

Dembele has been a hit-and-miss player. Unlike Ansu Fati, he can cause mayhem in one game and disappear in the next despite having hallmarks of a generational player. The world cup winner’s pace, skills are unmatched, and his unpredictability leaves defenders for dead. But it is tough to justify playing him, considering who he is up against.

On paper, it is clear who the superior player is. Ansu Fati is touted to be one of the greatest players of his generation. Last season he played just seven games and yet managed to score 4 goals. He was one of Barça’s most important players, and had it not been for his injury, he could’ve finished second, and maybe even top of Barça’s goal-scoring department. Additionally, the Spaniard’s distribution and control are far better than the Frenchman’s.

This highlights a major flaw in the team’s balance, though. With two (at a stretch three) wingers and four players who prefer to play centrally, intense competition is unavoidable Last season, Barcelona suffered from the lack of wide players. Defences could remain compressed, tightening up spaces inside the area. Without a natural winger, the Azulgrana failed to stretch opposition lines and missed an able dribbler.

A similar scenario could occur this season. Ansu Fati has just recovered from a major injury, and in the worst-case scenario, that injury may recur. Even Dembele’s fitness is a questionable matter. Every time it seems he has a grip on it, another one arises.

An injury to both Ansu and Dembele will leave the team in tatters. Barça would have to rely on wing-backs again, and the entire situation will become a mess. It is thus important to note that squad depth cannot be measured without accounting for factors like injuries.

Laporta must make it a priority to sign a third winger to iron out any injury issues that may arise. Without a fit and stable backup, Ronald Koeman would essentially be playing with fire every time he gives game time to Dembele and Fati.

The most ideal front three

As mentioned before, picking the first position is a piece of cake. It cannot go to anyone but the talismanic Lionel Messi. With his contract extension all but official, the captain is the first name on the team sheet.

The centre-forward position on the other hand is a completely different story. A case could be made for each of the three players, but it seems the best option will be Memphis Depay.

The Dutchman was priority numero uno for Ronald Koeman, which will likely give him the nod over his peers. Moreover, he has just entered his theoretical prime, and his game is bound to get better with every passing week.

With him leading the lines, the creative burden on Lionel Messi could reduce. At the same time, Depay could also contribute goals, something that Barcelona lacked last season. But while he settles down, someone like Griezmann needs to step up. This will give Depay some breathing room while he adjusts to life in Barcelona.

Ansu Fati should fill up the final slot. He is the future of Barcelona, and when fit, Dembele simply cannot rival his consistency, and most importantly, his finishing. But he mustn’t be overworked. Rotating the team is essential to maintain fitness.

With these three up front, Barca could form a dynamic and fluid front three. If you interchange any of the players’ positions, they can still shine in their new roles. They are each capable of providing and finishing, which means that they will leave defenders guessing as to where the next attack will come from.

Part of what made the legendary ‘MSN’ trio so good was how multitalented they were. Each of the three excelled at all the aspects that modern forwards require. Similarly, Fati, Messi, and Depay will form a versatile front three that can wreak havoc on opposition defences.

However, the story cannot end there. In the worst-case scenario, Barcelona might not be able to sell anyone else. On picking the front three, there are still three players on the bench who would be undisputed starters in any of the other great teams in the world. These players are not merely bench-warmers.

In all honesty, any combination of these six players is a decent shout for the front three. The margins are slim, and the combinations can change based on the scenario. That said, two factors are going to be integral to ensure a good campaign: rotations and merit-based selection.

When deciding who starts and who does not, Koeman must reward those who perform. There can be no room for any form of bias. Even if Koeman prefers Depay, the Dutchman has to give time to Griezmann, who showed he is more than capable of bearing the burden of goals, albeit inconsistently.

Before choosing a set ‘front three’, Koeman needs to experiment with the options he has at his disposal. If the Dutch manager can read the situation and bring on the player with the profile he needs at that point, these players could make Barcelona one of the deadliest attacking forces in Europe.