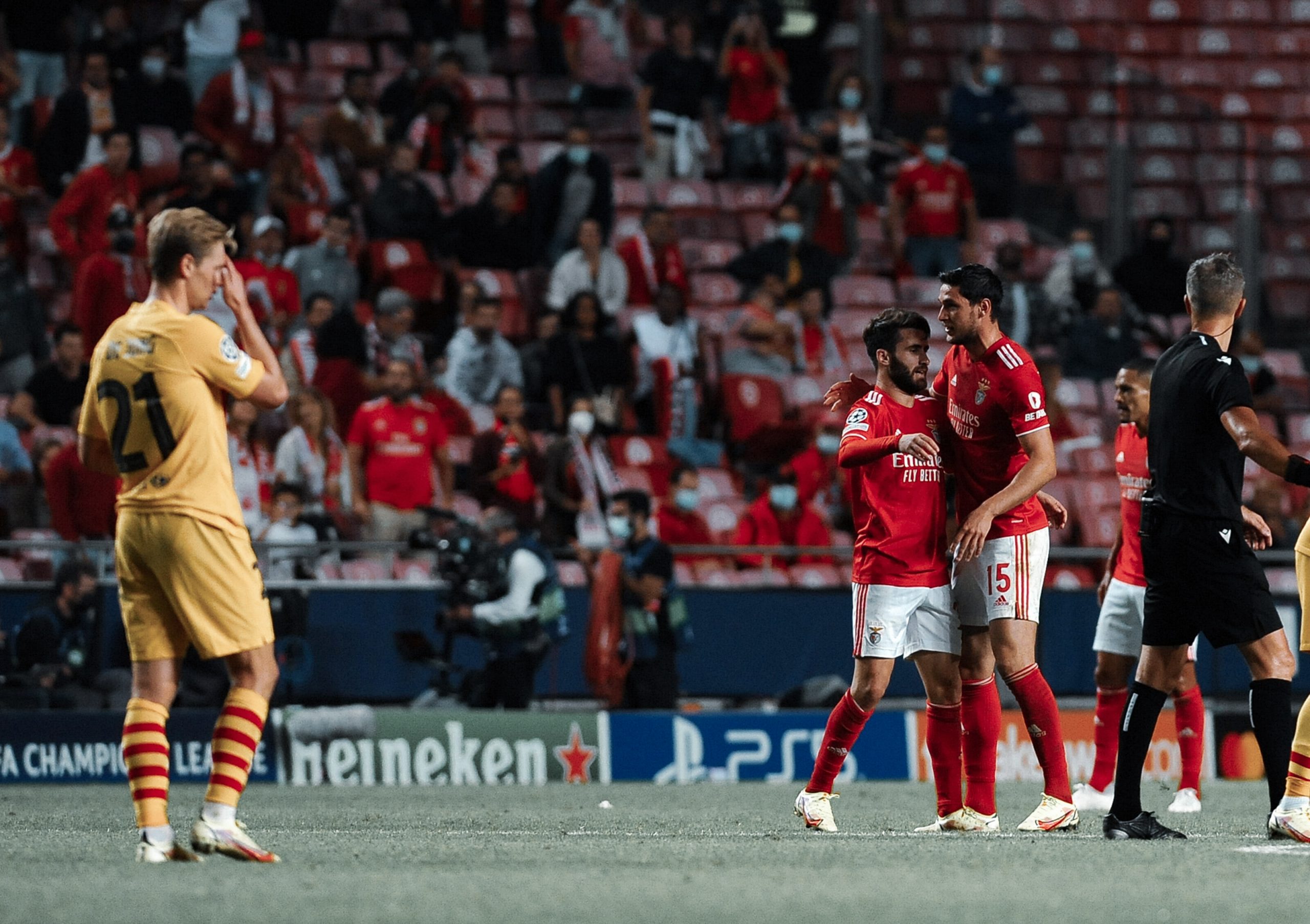 Barcelona is going through one of the grimmest phases as a football club. The Blaugranas, who often never tire of boasting its heritage, couldn’t even leave a mark against Portuguese side Benfica, against whom they were ought to bag three points to declare their contention for the knockout phases of the champions league.

Considering nobody is expecting Barcelona to even leave a scar under Bayern Munich’s noses by the end of the second leg, this was the bare minimum expected from Barcelona.

But last night was among the worst exhibitions by the Catalan unit, who’d hardly ever felt a problem in the group stages in the past decade. However, Ronald Koeman’s team is not even worth calling the shadow of its past, as Barcelona looked clueless throughout the long 90 minutes and handed Benfica the glorious 3-0 victory.

It was not a good night for the German goalkeeper, who has pulled many exceptional performances in his past campaigns in the same competition. Ter Stegen conceding three goals against Benfica is not the only evidence for his poor performance; he managed to only bag three saves, while the Aguias troubled him continuously within the 18-yard-box.

Moreover, the 29-year-old almost got saved from an embarrassing moment, which would have haunted him for years to come. He recklessly wandered near the half-line for a tackle, failing which gave Darwin Nunez an open goal to double up Benfica’s lead at the 52 minutes mark. However, Nunez wasn’t precise with his attempt, facilitating a narrow escape to Barcelona.

Araujo was the only solid presence in Barcelona’s defence last night; he managed to win four out of eight duels against Benfica’s attacks and made a handful of crucial interceptions and clearances that helped in limiting Benfica, adding onto their lead until the last phase of the game after the initial setback. The 22-year-old was also an ariel threat to Benfica and almost assisted Luuk De Jong, but the latter failed to convert.

Pique is among the veterans in the squad, and on many days he ends up being the saving grace for Barcelona, but last night he was far away from being a leader.

Starting off an aggressive note, Pique picked his first booking early in the game, and by the time the clock hit 30 minutes, Koeman was stressed that the 34-year-old would end up receiving a red card. Hence, he was replaced by Pablo Gavi.

The homecoming of Eric Garcia is certainly not clicking, as the 20-year-old is yet to deliver a single exceptional performance this season. But last night, he was probably one of the most significant liabilities of Barcelona.

The Spaniard contested in four duels and lost all. Additionally, the early breakthrough received by Benfica was embarrassingly provided by Garcia, when he failed even to prevent Nunez from making the decisive shot before being hit by silky crossovers and outpaced by the Urugyuan International.

Further, Garcia was found clueless against Joao Mario’s enigmatic footwork before Rafa Silva scored the second goal. In the dying minutes, picking up the red card was the last thing Barcelona wanted from him.

Sergi Roberto, at maximum, had a below-average performance against Benfica last night, which was not enough to inspire the Catalans to defeat their Portuguese counterparts. Roberto was in a favourable position to arrow in balls to be an attacking threat, but his xA was an unfruitful 0.25. Defensively also he hardly managed to make an impact as two of three goals were charged from his zone.

Frenkie de Jong was the only delight to watch from Barcelona last night. The Dutchman played a pivotal role in all the attacks generated in the first half, and he was holding the line for the team until he was forced to take Pique’s position as a centre-back. Even in defence, De Jong made a few crucial interceptions and tackles, proffering a total of eight recoveries.

It seems like the senior locker room in Barcelona can’t inspire the rest of the squad enough, as Busquets had a jittery performance across the 68 minutes he played. The overall performance by his team propelled him to claim that “Barcelona is in a serious situation”.

Pedri seemed to be the only threat in the attack from Barcelona, but it is baffling to witness Koeman pinning all his hopes on the 18-year-old. Pedri recently came back from an injury, and his presence in the lineup honestly seemed rushed.

He tried to scare Benfica with his long-range efforts and was involved in a few promising moves before being subbed in the 68th minute.

Sergino Dest’s ordeal is understood; the American International played out of position last night in the most extensive continental competition. But neither his defensive output was convincing nor his attacking. His involvement in the attack was predictable and was not significant enough to be called an irritant for Benfica.

No matter how charmless it sounds, Luuk de Jong leading Barcelona’s attack is the harsh reflection of the club’s present. The Dutch striker was hardly a strain for Benfica’s defence last night. His finishing was as awful as a Sunday leagues’ defender. Honestly, a better striker involvement would have given absolutely a different output by the Blaugranas in Lisbon, but it is what it is!

After key departures from the club in the last couple of years, Memphis Depay’s arrival in 2021 has been no less than some warmth to the hearts of Barcelona fans. But his performance last night was not inspiring at all.

Though the Dutchman tried to make an impact in the opposition’s 18-yard-box, his plans were being spoilt by the impressive ensemble of Benfica’s defence led by Nicolas Otamendi.

Koeman’s first inclusion in the game was another testimonial to the fact that Barcelona’s overwhelming dependency on its youth is not sustainable. 17-year-old Gavi was brought on the pitch when Barcelona were already losing at all fronts, and it was a gigantic task for the teenager to set his team in order while the old guards were failing.

Replacing the outplaced de Jong was also not an uncomplicated task either, and Gavi, for most of the game, was overshadowed by the emphatic attacks of Benfica.

Coming back from months of recovery, Ansu Fati was sensational in the dying minutes against Levante last weekend. Koeman, anticipating the same impact, tried to change his fortune by deploying Fati in the 68th minute, but it hardly made any difference.

Phillipe Coutinho was expected to be in the lineup but started his trade off the bench by coming onto the pitch at 68th minute to add depth in the attacking front of Barcelona whilst the team was trailing by 2-0.

He was hardly visible after stepping onto the field, though, giving his side no respite. Though to be fair to him, the damage to Barcelona was already done before he stepped on, and the minutes in his hands were not enough to initiate a recovery.