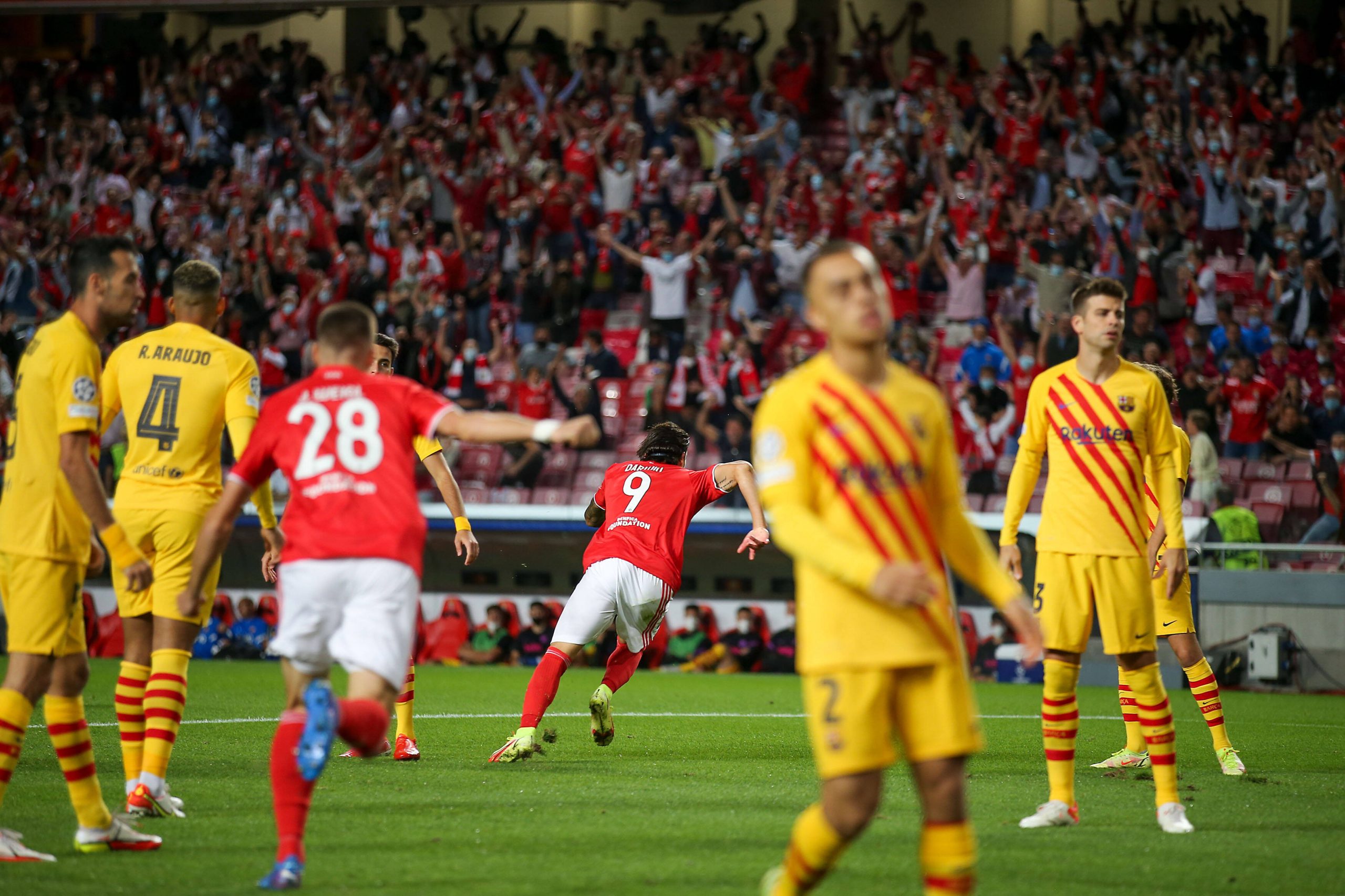 Barcelona took on Benfica in the second matchday of the UEFA Champions League. The Catalans lost their opening encounter to Bayern Munich and were already in fourth position in the group.

Moreover, their opponents were unbeaten in their domestic league heading into the game. With seven wins in seven games and a draw in the opening Champions League night, Benfica were in tremendous form.

The first period got off to the most enthralling of starts for the local crowd as Benfica managed to beat Marc Andre ter Stegen as early as the third minute. Darwin Nunez produced a magical run at the edge of the box. The forward beat Eric Garcia with his trickery and fired a wonderful shot past the German keeper to give the hosts an early advantage.

Benfica piled on the pressure when Yaremchuk fired a low shot across Barcelona’s goalpost. This time, Ter Stegen was alert and made the save.

The visitors slowly grew into the game, and chances started flowing by the tenth minute. The first big chance fell to Luuk de Jong when he fired the ball above the goal in the 11th minute. Just a minor later, Sergi Roberto teed up with Frenkie de Jong but found his shot just wide.

Gerard Pique was booked in the 12th minute of the game, meaning he had to play the rest of the game with caution.

Sergi Roberto and Pedri had their chances in yhe 18th minute. The former’s effort was well kept out by Vlachodimos while the 18-year-old’s shot went just wide.

Benfica them took over the proceedings for the next spell of play as they controlled possession and created chances. However, Memphis Depay had a clear chance in the 27th minute when he was set free in front of goal. His shot was audaciously defended and ended in a Barcelona corner.

Frenkie de Jong was the Catalans’ most inspirational player in the first half. He continued his impressive display with a wonderful selfless ball to Luuk de Jong who failed to find the target.

Ronald Araujo pushed Darwin Nunez in the box two minutes later. Though there were calls for a penalty, the referee disagreed and continued the play. Meanwhile, Gerard Pique attempted a poor tackle that made him a candidate to be sent off. That said, Koeman replaced the centre-back with young Gavi in the 33rd minute.

Ten minutes later, Benfica player Valentino Lazaro went down injured and could not continue. Memphis Depay felt he was taken down in the box and claimed a penalty in the dying minutes of the half. However, the spot-kick was not awarded and Barcelona entered the halftime break 1-0 down.

The visitors did not have the best of starts to the second half as Benfica took control and dominated the opening minutes. Darwin Nunez once again found himself free and fancied a shot, but it was defended well. Otamendi took a powerful shot from distance but ter Stegen was again up for the challenge.

The German goalkeeper had a moment of madness in the 52nd minute when he left his line and ran halfway up the pitch for the ball. Nunes beat the keeper and took a shot at the empty goal from distance, but his shot clattered against the right post.

Eric Garcia then had his name taken into the little book for obstructing the run of the opposition. Julian Weigl of Benfica conceded a dangerous freekick in the 63rd minute, but Depay’s freekick could not create any danger.

Memphis Delay fed the ball on a platter to Sergi Roberto at the far corner. The Spaniard got the touch to finish, but the shot was heroically defended by Grimaldo.

Ronald Koeman prepared his next set of changes with Ansu Fati, Coutinho and Nico Gonzalez coming in for Sergio Busquets, Luuk de Jong and Pedri.

Just moments later, Benfica scored their second goal with Rafa Silva getting on the scoresheet.
Joao Mario and Yaremchuk combined to test ter Stegen before Rafa Silva pounced on the rebound to make it 2-0.

The Portuguese League leaders took the upper hand after their second goal and posed a constant threat to the Barcelona defense.

The 76th minute presented a new confusion when Benfica’s header hit Sergino Dest’s hand in the box. The hosts were awarded a penalty after VAR interfered. Darwin Nunez stepped up and sent ter Stegen the wrong way to make it 3-0 to Benfica with 10 minutes to go.

The closing minutes displayed exciting sequences from both sides. While one expected Barcelona to shift into top gear being 3-0 down, the Blaugrana did not threaten much in the closing ten minutes.

Eric Garcia was sent off in the 86th minute after receiving his second yellow card when he had his arms all over the Benfica substitute. Sergi Roberto resultantly came off for Oscar Mingueza in the penultimate minute. Three minutes were added on, but failed to be of any use for Koeman’s side.

With this defeat, Barcelona stare at the realistic possibility of facing a Champions League group stage exit for the first time in 20 years. Two 3-0 defeats in the opening matchdays are undoubtedly among the clubs worst ever starts to a UCL campaign. Ronald Koeman comes under further pressure and is closer than ever to being sacked by the club.