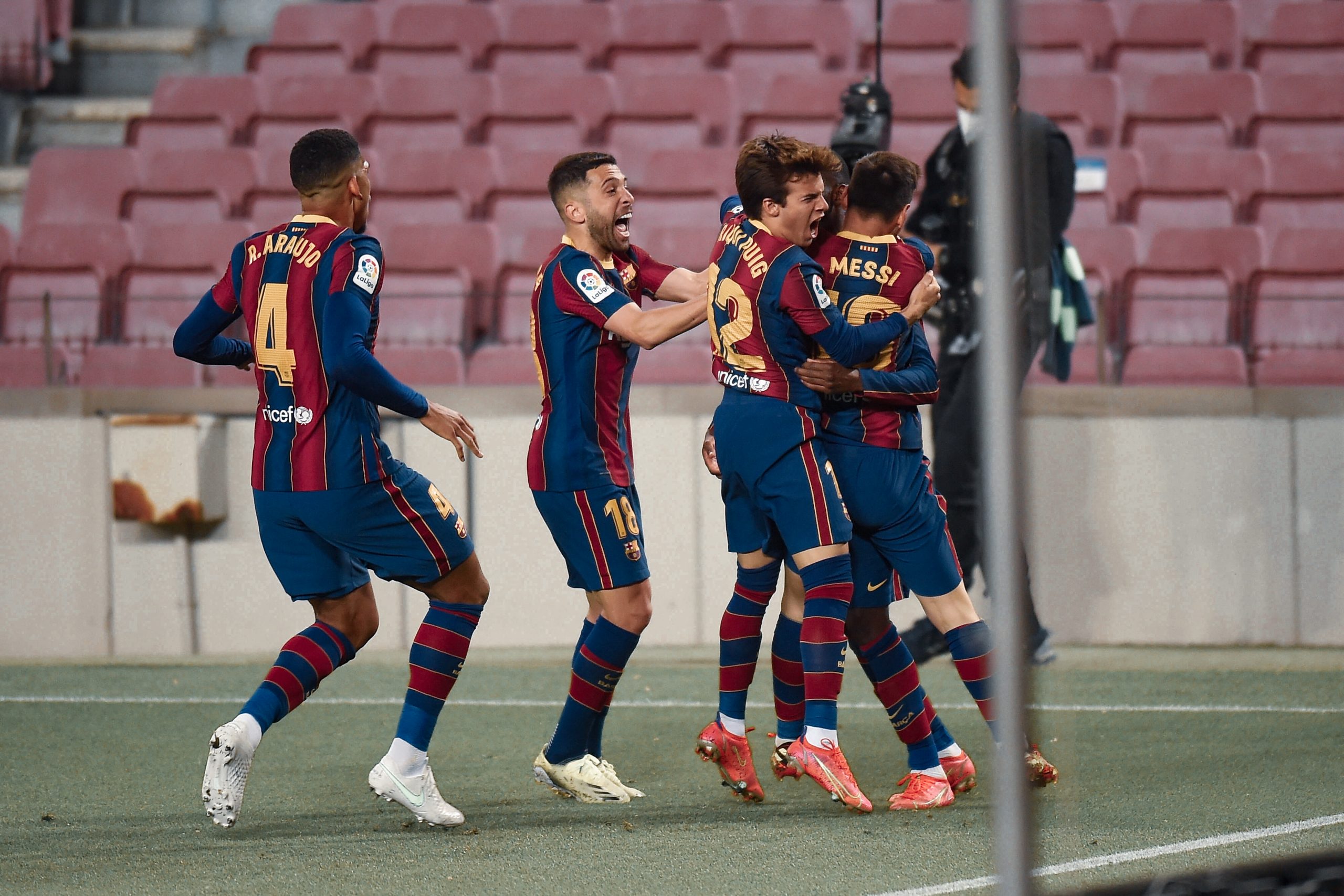 As the clock strikes the 91st-minute, Frenkie De Jong’s cross from the right floats into the box. Ronald Araujo rises to meet it, and his attempted header falls kindly for Ousmane Dembele at the far post. Not a moment of hesitation on the part of the Frenchman, as he lashes out a left boot, sending the ball crashing into the goal past Jordi Masip, the former Barcelona keeper who had thwarted the Blaugrana all night so far. Barcelona’s victory against Real Valladolid is sealed.

Granted, a win against Real Valladolid at home should not be as dramatic as it was on Monday night. Credit to the visitors, who will feel hard done by after a valiant effort, coming within inches of at least a point at the Camp Nou. But such is the nature of football. And in this season’s title race, there is no opponent too small and no victory too big.

Dembele’s searing strike proved to be the all-important winning goal that propelled Barcelona back into second. After Atletico Madrid fell to defeat against Sevilla at the Ramon Sanchez Pizjuan, the Catalans are now within one point of Diego Simeone’s men atop the La Liga table.

Barcelona have written a fair few dramatic stories this season, especially since the turn of the new year. Before leaving it late against Valladolid, they have already subjected the fans to a couple of nerve-racking matches, wriggling free from the jaws of defeat. While Ronald Koeman has instilled a major winning mentality within the squad, a flair for the dramatic has perhaps accompanied it.

Making things difficult for themselves

Against Eibar, for example, a match where they lost Philippe Coutinho to what would become a highly problematic injury, Barcelona missed an early penalty and then conceded in the second half. But Ousmane Dembele’s 67th-minute strike salvaged a point for the Catalans.

The Super Cup semi-final against Real Sociedad followed, which Barcelona barely edged out in a penalty shootout. Marc Andre Ter Stegen’s two wonder-saves kept Barcelona in the match after de Jong’s opener was cancelled out by a Mikel Oyarzabal penalty. But they hung on through the additional thirty minutes and eventually prevailed on penalties. But the drama did not end there.

After a heartbreaking final loss to Athletic Club in the Supercup final, where Barcelona conceded a 90th-minute equaliser and eventually lost in extra time, they were once again pushed to the limit by Segunda B side Cornella in the Copa del Rey, relying on extra-time goals by Dembele and Martin Braithwaite. In the very next round against Rayo Vallecano, they had to come from behind to eventually clinch the match courtesy of an 80th-minute winner from Frenkie de Jong.

Shortly after followed a gruelling encounter against Athletic Club, once again settled by a late Barcelona goal. Then came what has perhaps been the game of the season so far — the Copa del Rey quarters against Granada.

2-0 down with less than three minutes to go, the Blaugrana outfit’s most realistic quest for silverware seemed to be at an end. But Koeman’s side were relentless, throwing attack after attack at the home side. In the 88th minute, however, Barcelona’s resurgence began. Antoine Griezmann slotted home at the near post after a glorious pass from Lionel Messi. In added-on time, Messi found Griezmann once again in a similar area, and the Frenchman headed across goal to find Jordi Alba, who nodded home from close range.

The comeback was complete, but there was more in store. In extra time, Barcelona put the pedal to the floor and smashed three more goals past the hapless hosts, who had lost all their steam and determination. In the context of the season, this win set off a chain of fabulous performances, bringing back the sense of belief among the team and the fans.

The next game was an away clash in La Liga against Real Betis. Another nail-biter which ended in joy for the Catalans as Francisco Trincao scored a belter to notch his first goal for the club. His 87th-minute strike proved to be the match-winner, and the squad burst into euphoria.

Then, of course, came the defeats to Sevilla in the Copa del Rey, PSG in the Champions League and the draw against Cadiz in the league. The lowest points of Barcelona’s 2021. But the resurrection that followed was delightful.

Barcelona produced a heroic performance in the semi-final second leg against Sevilla in an encounter that had everything from goals to red cards to penalty saves. Gerard Pique’s 94th minute header took the tie to extra time for the fifth time in the season. But Martin Braithwaite’s header then booked Barcelona a place in their 42nd cup final, bringing with it a renewed sense of optimism and belief that this club can win against anyone under any circumstances.

Clearly, a lot has happened over time, which is why the fans are so happy about Barcelona’s victory against Valladolid. It may seem like a routine task, but that is precisely the point. The routine had also become troublesome, but slowly that seems to be changing once again.

It has not been an easy season for Football Club Barcelona. There have been many upsetting moments, many injuries, many missed opportunities already. As Jordi Cruyff so rightly put it, this season alone feels like it has been worth two or three. And despite all that, Koeman’s men have found their feet after enduring one of the most turbulent periods in the club’s history.

It will not always be pretty, just as Barcelona’s victory against Valladolid demonstrates, but carrying on despite endless adversity is what makes champions. And if Barcelona want to be champions this season, they will have to keep hammering away. They will have to be relentless, rigid and resilient all the way through. And they have shown on multiple occasions now that they are more than capable of it.