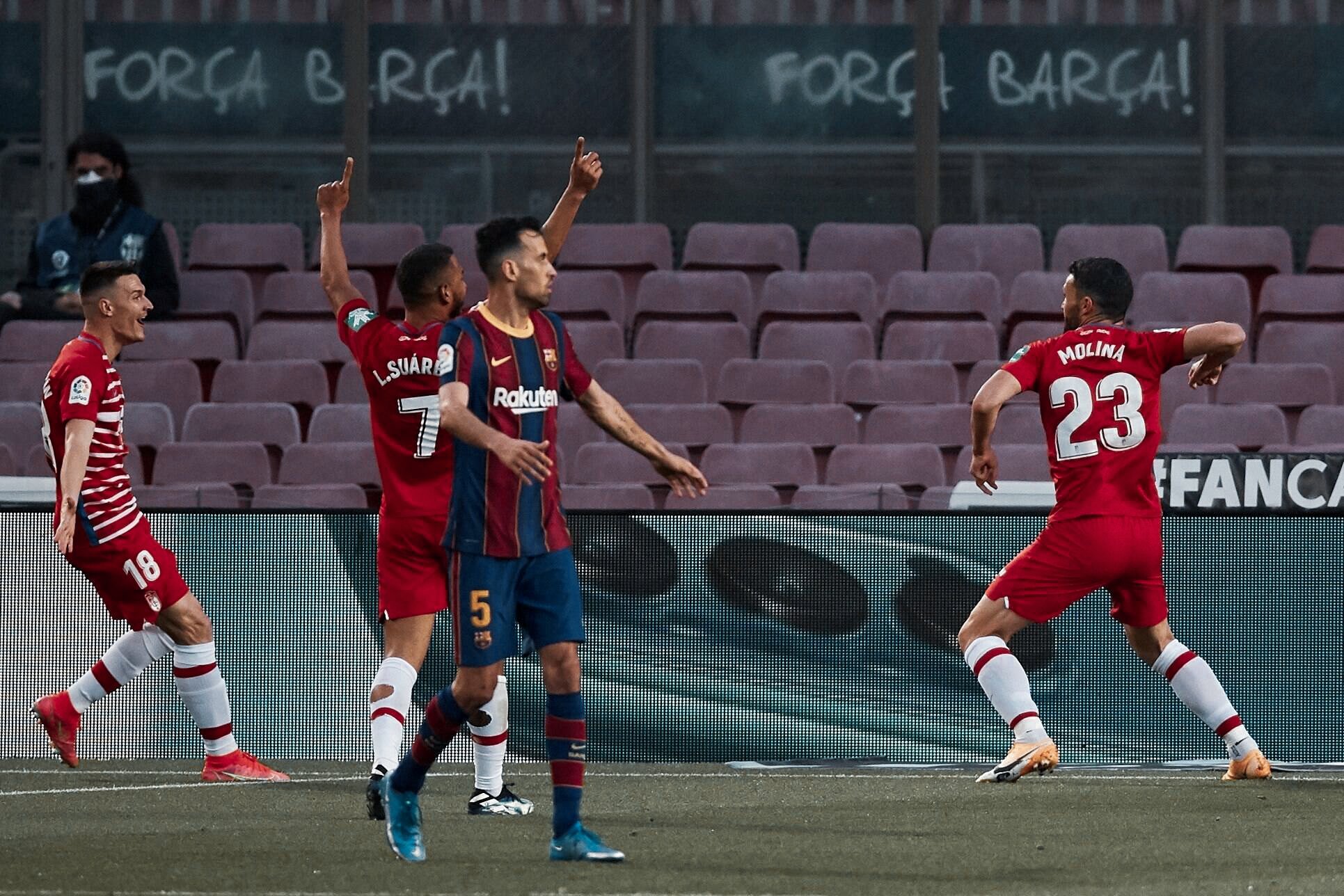 In what was the most crucial fixture of the season so far for Barça, they gave in, conceding two second-half goals against a sublimely disciplined Granada side. The Catalans have totally wasted their opportunity to go top of the table in La Liga for the first time this season. Instead, they remain third, level on points with Real Madrid but behind due to a worse head to head record.

Barça dominated the fixture for the most part, but a poorly organised backline and spaces in behind the midfield and defence allowed Granada to score two goals. The visitors bagged the comeback win and earned points at the Camp Nou for the first time. Barça Universal brings you the ratings for the players’ performances on a scale of 1 to 10.

The German keeper had a poor showing on the night, not registering a single save while conceding two goals. No heroics from ter Stegen, as Barça crumbled when it counted most. Additionally, he wasn’t helped by the fact that he was defending a goal that had virtually no defensive protection, given Pique and Umtiti’s poorly organised backline.

Umtiti enjoyed a fairly decent return to action. He broke up Granada’s play for the most part while being a fairly reliable presence in the back. Additionally, he is a great passer of the ball and effectively circulated the ball well for the first sixty minutes. However, Umtiti and Pique had a severe lapse in coordination, unable to track Molina in the centre of the box during the second goal. Umtiti also left a huge gap between himself and Pique, allowing the Granada striker acres of space to head the ball home.

The Spaniard had a fairly poor showing, circulating the ball effectively though not turning up defensively. A mistimed attempted interception from Mingueza led to Barça conceding the first goal. Soon after, he was substituted off.

Pique had a very average showing, almost totally unable to marshal his defensive line into any level of organisation. The veteran found it difficult to deal with the pace of the Granada attackers on the night. He was the culprit for being unable to track the cross into the box, which Jorge Molina headed to the far post with perfection for Granada’s winner.

Roberto could not provide a single spark of creativity from the wingback position while also failing to cover his defensive duties. While he came into central positions well, he did little to nothing that could affect the outcome of the game.

A bright spot on a dark night, the Dutchman was industrious as ever, covering all areas of the field. He even registered 6 key passes on the night, acting as one of the main creative forces for the Blaugranas. Nonetheless, his efforts felt wasted, as the collective were unable to create anything of substance in the second half and ultimately fell to a defeat.

Busquets had — potentially — his best game of the season, carrying on his wonderful form in 2021. He was the only reason on the night that Barça had any chance of surpassing Granada’s extremely compact low-block. The Spanish veteran sent in one magical through ball after another, picking apart the Granada defence expertly. On the night, he executed nine successful long balls, won 12 duels and six fouls.

Easily Barça’s best player on the night, Busquets played in full stride tonight. Unfortunately, the Catalans failed to get a result. A consequence of the loss is smearing on what was an utter masterclass from the single pivot.

Moriba had a decent outing, displaying some bright moments, nifty dribbles, and neat passes. However, the youngster had a tough time avoiding awry tackles and keeping a solid balance while in possession. Nonetheless, he is destined to be a star, with several skills in his locker that can make him a great player.

Alba was totally ineffective on the night, unable to deliver even one accurate cross from six attempts. Additionally, he did not coordinate his positioning with Umtiti, which led to both of them allowing Granada far too much space to break on multiple occasions. A poor showing from the Spanish fullback, who was pocketed by Víctor Díaz all night long.

Granada were not entirely effective in stripping space away from Messi; however, with how compact their low block was, they almost made the Argentinian’s impact on the game ineffective throughout the night, perhaps devoid of support at times. Save for one stunning tight-angle finish, Messi was not at his brilliant best, often losing the ball frustratingly. Nevertheless, even a relatively poor performance by Messi’s standards warrants him a 7.5 in our books.

Griezmann was brimming with confidence throughout the game, and it showed in his assist, which was comprised of sheer class and excellence. Upon receiving the one-two from Messi, the French striker turned in the most delicate manner to evade his marker and returned the ball to the Argentine, who took care of business. Griezmann’s involvement in the game was more active than usual, as the Frenchman could be seen moving between the half-spaces and getting involved in creative play.