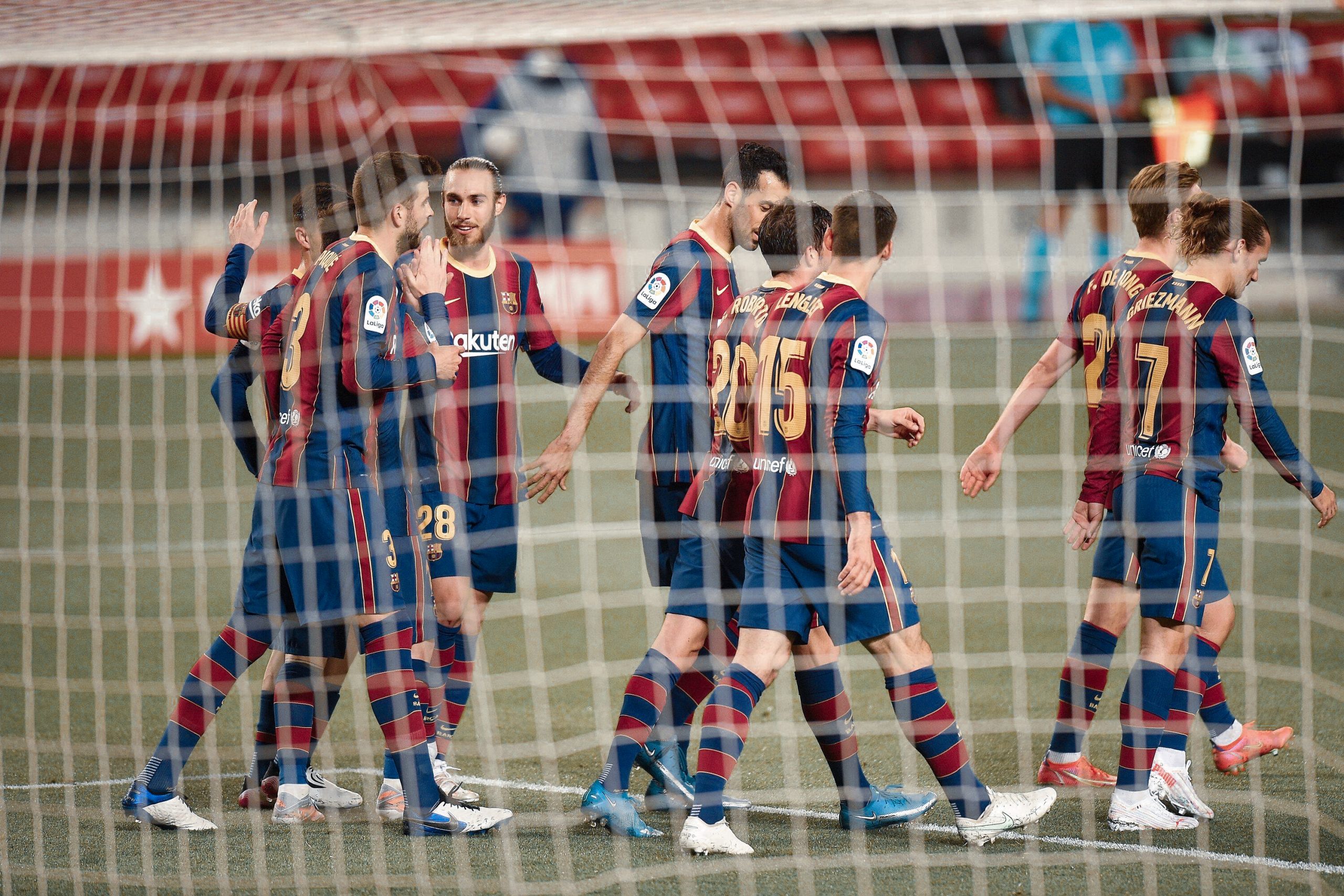 On Sunday afternoon, Barcelona will travel to the Estadio de la Cerámica to play Villarreal in what will surely be a tightly contested fixture.

After dispatching Getafe 5-2, Barcelona still find themselves sitting third in La Liga, but a win against Villarreal on Sunday will move them to second. Most importantly, thanks to Real and Atlético Madrid’s recent slip-ups, the league remains in Barça’s hands. Winning their remaining seven games will earn them their first league title in two years, but the road to get there is filled with tough opponents.

Villarreal will be one of Barça’s most difficult fixtures left, and getting a positive away result will require nothing short of the best from the Catalans. Furthermore, they will play off only two days of rest since their Thursday night match against Getafe.

Nicknamed el Submarino Amarillo, or the Yellow Submarine, Villarreal are currently seventh in the table but only one point from fifth-place Real Sociedad. They have lost two of their last three league games, but that should not detract from their clear quality. Impressively, they are also in the semi-finals of the Europa League, facing off against Arsenal later next week.

The last time these two teams played was in Barça’s opening match of the season, and the Catalans won 4-0. Nonetheless, a lot has changed since then.

Despite losing two of their last three league games, Villarreal are in the midst of one of their best stretches of play all season long. They have won eight of their last ten matches– scoring twenty goals – and, as previously mentioned, are only one point from fifth place and are in the semi-finals of the Europa League.

Led by Unai Emery, Villarreal have scored the fifth-most goals in La Liga this season (49) and have the 7th best defence (36 goals conceded). Villarreal are comfortable in possession, averaging 56% per game, good for fourth in the league. They complete 33.5 passes into the final third (ranked third in La Liga), 10.2 passes into the opponent’s penalty box (third), 2.56 crosses into the box (fourth), and the fifth most touches in the attacking third.

Offensively, the Yellow Submarine average 2.44 goal creating actions per game (fifth in the league) and 18.47 shot-creating actions per game (fifth). Their attack is highlighted by Gerard Moreno, who has an astounding 26 goals and 9 assists so far this season and is third in league with 19 goals. Their second-leading goalscorer is ex-Barça forward Paco Alcacer with 12 goals. Including Moreno, they have five players with at least five assists this season.

Their defence is headlined by veterans like Raul Albiol and rising youngsters like Pau Torres, who was a Barça target. In the middle of the park, Dani Parejo is the standout, averaging a squad-leading 8.54 passes into the final third and garnering seven assists.

Villarreal typically lineup in a 4-4-2 or 4-3-3 formation, although Emery could opt for the former to counteract Barça’s three centre backs. Sergio Asenjo should start with Juan Foyth, Pau Torres, Raul Albiol, and Alfonso Pedraza in the back. The midfield may be Dani Parejo, Manu Trigueros, Moi Gomez and Capou, with Gerard Moreno and Paco Alcacer up top.

They will notably be missing left-back Pervis Estupiñan and veteran midfielder Vincent Iborra.

While they may have their eyes set on the Europa League, Villarreal will have to be focused on the task at hand if they want to finish off the season strong.

Barcelona are coming off a dominant 5-2 performance against Getafe, but season-long issues of defensive lapses, careless mistakes, and losing focus reared their ugly heads in the second half. Ronald Koeman will hope that is merely a blip and not a sign of things to come. On the other hand, they did put five goals past one of the best defence in the league.

Barça’s La Liga form to date has been incredible. They haven’t lost since early December, and since then, they have won 51 out of 60 possible points. Still, they will need to be on their A-game yet again to get a positive result against Villarreal.

Koeman will likely opt for the same starting eleven that faced off against Getafe and Athletic Bilbao before that, utilizing a 3-5-2 formation. Nonetheless, there may be some changes.

Marc-Andre Ter Stegen will surely start in goal and his back-up Neto is out injured. Clement Lenglet and Oscar Mingueza will be on the left and right respectively of Gerard Pique or Ronald Araujo. Araujo came on for Pique in the second-half of the Getafe match, and his pace and aggression could be key against Villarreal. The Uruguayan centre-back gave up a penalty against Getafe but he redeemed himself by scoring a powerful header to put Barça up 4-2.

Having three centre-backs will give Barça more bodies to cover Villarreal’s deadly striker partnership of Paco Alcacer and Gerard Moreno.

Jordi Alba should start again at left wing-back, and he will look to add to his team-leading 15 assists. The 32-year old has notched four assists in his last five games. Sergiño Dest was rested for Sergi Roberto against Getafe, but the young American will likely start to give Barça more firepower in their attack.

Barça’s midfield continues to boss opponents, with Sergio Busquets and Frenkie De Jong in, scorching form. Busi, especially is coming off a dominant performance against Getafe, but Villarreal will ask more from them in terms of pressing and defensive work. Pedri had a rare off-night against Getafe, but the youngster should be back at his best. After all, he has been one of the team’s most consistent players all season long.

The question remains about who Koeman will start upfront: Lionel Messi and Antoine Griezmann, or the Argentine with Ousmane Dembele? Dembele was a late addition to the squad despite not playing against Getafe due to injury, and Griezmann has played well recently, scoring two goals in his last two appearances. Villarreal are unlikely to sit back and absorb pressure like Getafe, but Griezmann may still be the better option to start, with Dembele energizing the team in the second half.

Messi continues to be at his best and has five goal contributions in the last two games, not to mention selflessly giving Griezmann the penalty last time out.

Danish forward Martin Braithwaite, who has been a regular off the bench, will miss the match due to an ankle injury, so Koeman’s substitutions will be something to keep an eye on.

With Barça in hot form, Villarreal will have a lot to handle. The match will see two teams that like to keep possession, maintain control of the game, and have explosive attacks.

Villarreal’s player to watch is none other than talisman Gerard Moreno. The 29-year old center forward is on a tear this season, tallying 26 goals and 9 assists, contributing to over one goal a game. He has scored five goals in his last five league appearances, and nine in his last eight in all competitions.

Moreno averages 3.09 shots per game and 2.94 shot-creating actions per game. His influence is felt throughout the pitch, capable of playing either as a centre forward or right-winger.

Moreno will be a handful for Lenglet as he operates around his side of the pitch. That battle could be key in determining the outcome of the game.

Previous meetings: Barcelona – four wins, one draw (16 goals for, 6 against)

With a big matchup against Villarreal, Barça’s end of the season schedule is admittedly difficult. Their past record against the Yellow Submarine is astounding, and that should continue yet again. The Blaugrana are on a roll, although Villarreal, likely through Moreno, should be able to score against the Catalans’ (sometimes) shaky defence. A narrow victory for Barcelona represents a tightly contested match between two good sides.