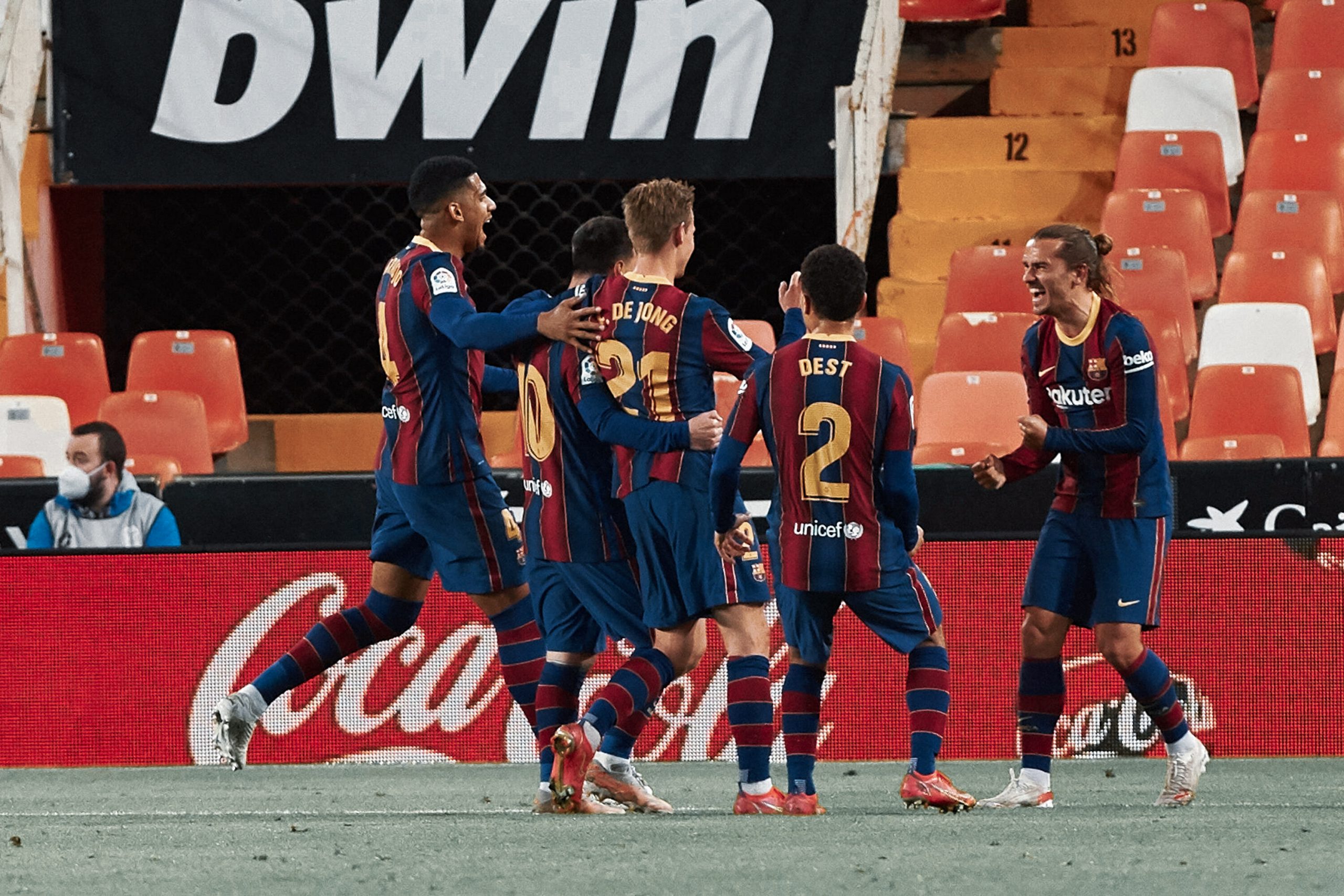 Barcelona travelled to the Mestalla and grabbed the victory against Valencia in what was a very nervy affair. Coming back from a goal’s deficit in the absence of coach Ronald Koeman in the dugout, the Catalans hung on after a nail-biting few minutes to secure all three points. This is the first time Barcelona have beaten Valencia at their ground since 2016, and the victory could be defining.

Courtesy of Lionel Messi and Antoine Griezmann, who remain the most proficient duo in La Liga, Barça maintain their title hopes in what is shaping up to be the best La Liga title race in recent history. Barça Universal runs the rule over Ronald Koeman’s men.

Ter Stegen had a rather strange night, to say the least. It was an inconsistent performance for the German, filled with errors as well as some magnificent saves that kept the Garnet and the Blue alive in the game. The first goal of the game was largely ter Stegen’s fault, with the 29-year-old going down rather weakly at the touch of a Valencia player.

However, apart from poor distribution and one error, the Champions League-winning goalkeeper made some crucial and rather difficult saves on the night that kept Barça alive in the title race. The first one came at point-blank range, with ter Stegen saving a dinked effort from Guedes. The second was from a long-range effort struck by Račić, with the German coming in handy once again to make the diving save.

Perhaps still recovering from a loss of momentum, the Uruguayan didn’t have his best defensive display. Nevertheless, he was adequate at the back, keeping up with the Valencia attackers on the break. Apart from a few miscommunications with Piqué, Araujo’s most noteworthy moment of the game came at the end of a Lionel Messi cross, which the 22-year-old nearly converted into a goal with an outstretched boot.

The Spanish veteran was largely unconvincing on the night, really struggling to keep up with Los Che on the counter. He left a fair few gaps in the defence, though he maintained possession neatly. His aerial dominance was crucial for the Blaugranas in winning second balls and rebounds and then recycling possession.

A horror show for the Frenchman, unfortunately. After a consistent run of positive displays, he put in an abysmal display in defence last night. Singling out two errors, Lenglet totally failed to mark Gabriel Paulista, who evaded him like a needle in a haystack. Paulista broke out into an advantageous position in the box, totally leaving the French defender for dead before scoring from a header.

Lenglet’s second error came after he marauded upfield with the ball rather too confidently, leaving a massive gap down the left flank, which Valencia exploited with a swift counterattack. It was a poor showing from the 25-year-old.

Barça’s right-back struggles continue, with Dest unable to do anything meaningful throughout the game. Apart from keeping his width and being an option down the right flank, there really is the bare minimum to analyse in the American’s performance on the night.

The Dutchman can’t stop putting in masterclasses for Barça at this point. He’s slick as ice but dominant as a lion; de Jong will really do anything and everything required in midfield to ensure that Barça totally control the game.

Most noteworthily, de Jong had four interceptions, keeping things tidy in the midfield during dangerous breaks for the opposition. Additionally, with three successful dribbles, the marauding midfielder was all over the pitch, creating spaces, making himself available for one-twos, and even getting into the box in every chance to score goals. It was a rebound from de Jong’s shot that led to Griezmann’s goal for the Blaugranas.

A decent night for the Barça legend, who kept things crispy clean as always with five interceptions and three tackles. In addition, he boasted 105 touches on the ball with a 94.7% passing accuracy. You can never lose control in midfield when you have Busquets orchestrating from behind. Undisputed presence on the ball, he kept things ticking as always. However, he did not have a glamorous display as he did against Granada, where he was threading one through-ball after another.

The Spanish starlet suffered a rough night, having missed two big chances. He lacks the decisiveness and confidence he usually goes out onto the field with, struggling to challenge and create play on the night. He must keep his head down and continue working hard.

Alba was a large presence for most of the game, registering 126 touches and 2 key passes. Not only was he the main attacking outlet for Barça, but he was the only one on the night. Every single move — no matter how complex or simple — seemed to reach Alba on the left flank before being worked into the box. The Catalans will seriously have to look to habituate working to either flank before sending it into the box. But as of now, the Spanish fullback is the only meaningful provider of crosses in the team.

The Argentine didn’t enjoy his best night. But when one scores a free-kick like that, it’s tough to fault them for other, inconsequential moments throughout the match. The little maestro showed up when it mattered most, even though he missed a penalty, and was the difference-maker on two different occasions on the night.

That freekick a thing of beauty. When he first struck the ball, it seemed to have no curl about it through halfway during its flight. But suddenly, almost like a twist in a tale, the ball began curling rightwards to the Dutch goalkeeper’s disarray. Scrambling to reach the ball, Cilessen seemed a lost cause, as Messi’s wonder-stroke hit the right-post before finding its way into the goal.

Apart from a jaw-dropping free-kick, Messi completed six dribbles, one key pass, and an impressive 107 touches on the ball.

Another bright display from the Frenchman, who no longer seems lost in the Barça team. Constantly alternating positions with Messi, the World Cup winner is beginning to find a wonderful balance between occupying the half-spaces and breaking the opposition defensive lines with forward runs.

He is impacting the game from deep — linking up play and creating with his effortless playmaking — as well as making himself available in dangerous zones in the opposition box. It is not his simple tap-in goal that warrants him a high rating, but his involvement and understanding of teammates that does so. We hope that the Frenchman can continue to put up performances like these, for goals and assists will naturally follow. With 26 goal contributions for both club and country in club, only Messi and Lewandowski have been more effective than him. What started as a career of chaos and disappointment has now turned into an arc of redemption for the French star.

Roberto came on, and wishing minutes, Barcelona conceded a goal. At this point, it is hardly a coincidence.

Came on to play the last 15 minutes of the game. Maintained tempo and won all his duels.