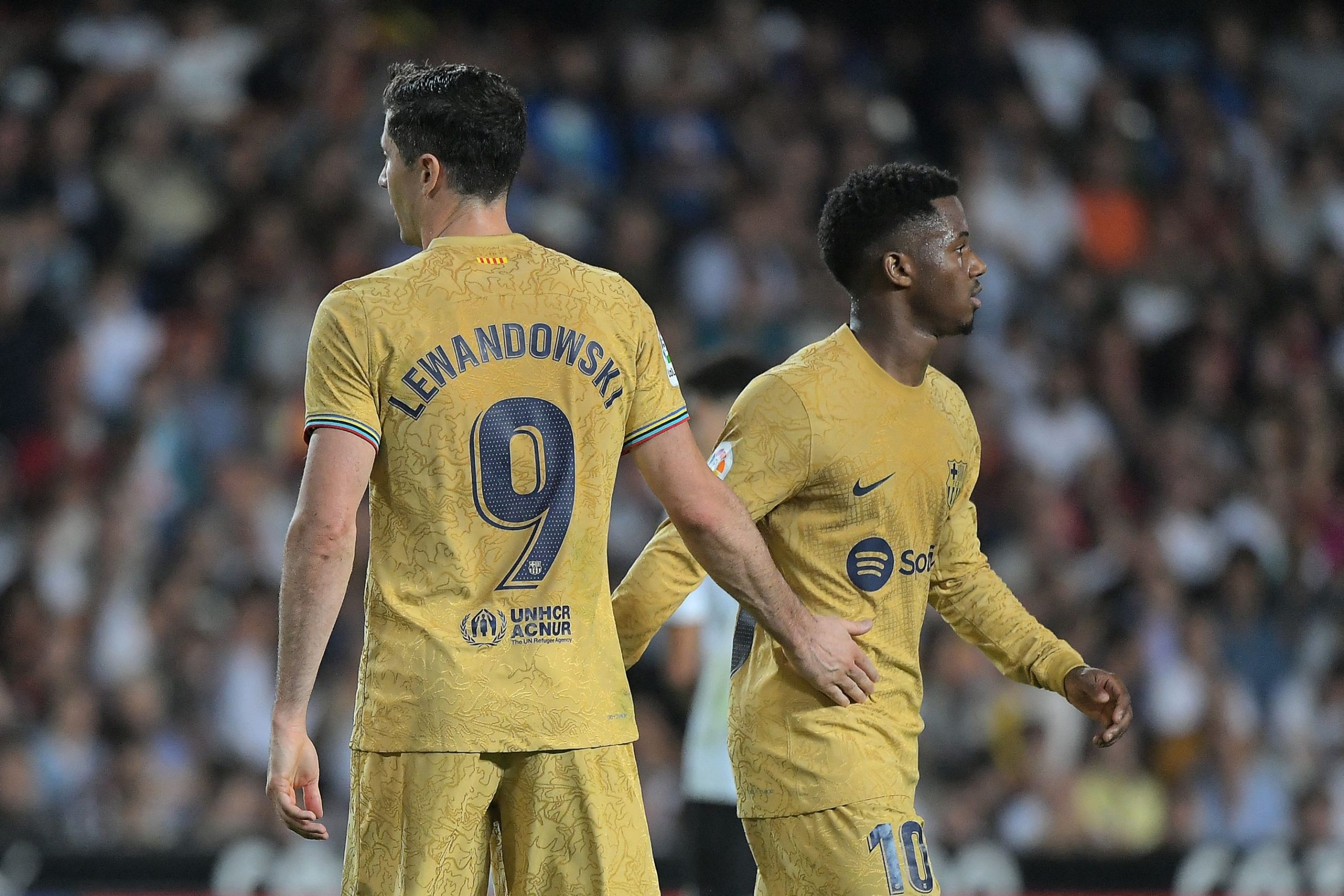 Barcelona pulled a win out of the dead against Valencia on Saturday night. The game seemed certain to end goalless at the end of regulation time, but Robert Lewandowski’s 93rd-minute winner brought all three points back to Catalonia.

Xavi’s men had to pay dearly for the win at Mestalla as they lost two centre-backs to injury during the game.

With two more league games before the long international break, the Azulgranas sit on 31 points from 12 games, marginally ahead of Real Madrid who have a game in hand.

Barça Universal brings you the player ratings from the Catalans’ emphatic win over Valencia.

The German International was hardly called into action in the first half, having to make just one save. Made an important save from Lino’s attempt in the 71st minute.

Was quite shaky going up against Jose Gaya on the right wing, yet held his own defensively. Narrowly escaped Valencia’s disallowed goal for he was totally exposed and helpless in that move.

Was Barcelona’s best player in the first half though the Catalans dominated the attacks and had the better chances. Went down injured in the 73rd minute and had to be taken off immediately.

The centre-back was decent in defence and impeccable with his distribution until the 42nd minute when he landed awkwardly after a challenge with Kluivert. Could not continue the game and was taken off for Marcos Alonso.

Turned back the years with his robust runs down the left flank. Constantly connected with Fati and Pedri to create wonderful sequences from which the team’s better attacks stemmed.

Single-handedly broke Valencia’s lines time and time again with his incisive passes. Created the move that led to Ansu’s disallowed goal and created one big chance in the first half alone.

The veteran has come under fire in recent weeks for his sluggish and sub-par performances on the big nights. Was not particularly special at Mestalla but did not do much wrong during his display either. Taken off before the hour mark.

The Dutch International once again proved his calibre with an all-round display. His simple movement, feints and passes formed the backbone of Barcelona’s buildup without looking overtly flashy.

A very poor first half for the Frenchman as he failed to register a single shot in 45 minutes. An invisible body on the field with barely any contribution to show.

The Pole hit the post in the closing minutes of the opening period with a well-timed header. A key element in the team’s linkup play in the final third and exploited Valencia’s spaces. Quietened out in the second period but came up clutch in the dying minutes of the game to score a memorable winner.

Did what he does best in the first half – create a goal threat. The youngster had a well-worked finish disallowed in the first half but kept going for goal when presented even with a narrow window. However, a major chunk of his attempts did not even test Mamardashvili.

Struggled in defence, and made a terrible challenge on Guillamon just minutes after coming on. Slowly stabilised and grew into the game.

Good dribbles and contributed well in the general buildup on his return to Mestalla. Provided a lovely pass to Lewy across the face of the goal in the 83rd minute which came to nothing but missed the easiest chance of the game minutes later.

Added intensity and dynamism to the middle of the park. Far from his influential best but still vital in every transition.

The Brazilian was again silent for most of his time on the field, creating no tangible threat and losing the ball meekly. However, he provided a sumptuous cross for Lewy’s eventual winner.

Came on completely unprepared after Kounde was taken off injured. Solid performance with no glaring mistakes.