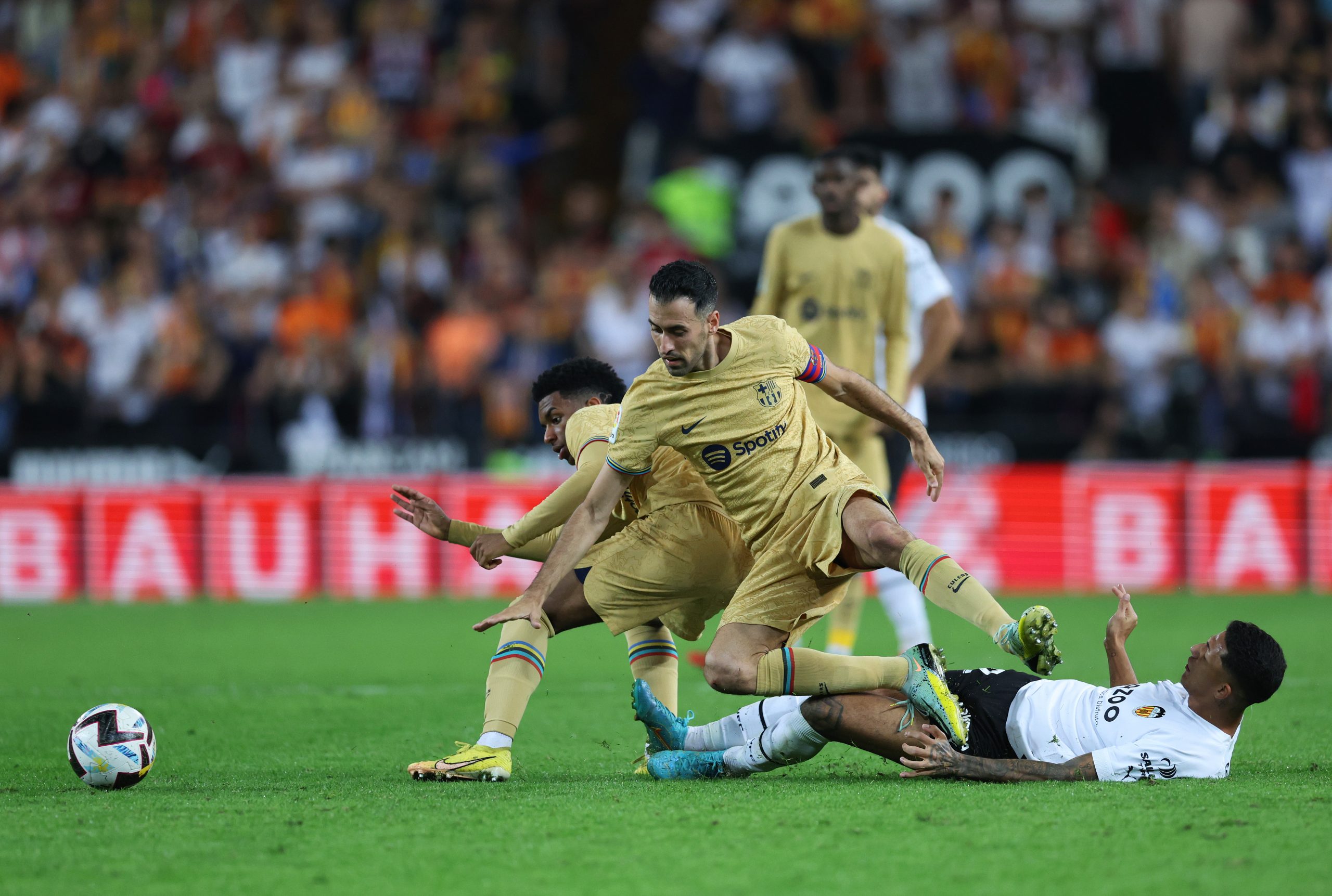 A few years ago, Valencia used to be amongst the top teams in La Liga, posing a constant challenge for a league title and qualifying for Europe with ease. However, a lack of direction from the management has seen them fall from their grace and onto the rough floor.

Gennaro Gattuso’s side currently sit tenth in La Liga with four wins and four losses in 11 games and hosted Barcelona on Saturday night. While Mestalla has historically been a difficult venue for the Catalans, they were the undisputed favourites on the night.

Xavi opted to put out a centre-back combination of Jules Kounde and Eric Garcia with Alejandro Balde at back and Jordi Alba on the left side of the defence.

Sergio Busquets led the midfield with Frenkie de Jong and Pedri, while the forward line of Robert Lewandowski and Ousmane Dembele was completed by Ansu Fati.

The hosts seemed to have got off to a flier as Valencia directly threatened Barcelona’s goal seconds after the start of the game. Edinson Cavani and Samuel Lino combined to open the Catalan lines, but Ter Stegen was there to save the attempt.

From there on, Xavi’s men slowly began growing into the game. After a half-chance in the fourth minute, Ansu Fati forced Valencia’s shot-stopper to charge out of his goal to make a save.

By the halfway stage of the opening period, Barcelona were well and truly at the peak of their powers. Ansu Fati put the ball into the net in the 28th minute after Lewandowski’s wonderful ball between the lines but was significantly offside. The score was restored to parity by the referee.

The Catalans really turned up the heat in the final five minutes of the half as they peppered balls into the hosts’ area.

Every Valencia clearance seemed to fall at the feet of a Barcelona player and the waves of relentless attacks kept coming. Lewy’s dangerous header painfully struck the post, and both teams entered their dressing rooms without a goal.

Samuel Lino connected with a lovely cross-field pass to give Valencia the lead in the 49th minute but the goal was disallowed as Marcos Andre touched the ball with his hand in the buildup.

Ferran Torres, Gavi and Raphinha came on for Ousmane Dembele, Sergio Busquets and Ansu Fati in the 55th minute.

By the hour mark, it seemed like Barcelona had lost control of the game. Unlike in the opening period, the Catalans no longer dominated the chances, and there was a need for an urgent change of approach.

Jules Kounde went down injured in the 72nd minute, and Gerard Pique replaced him with 17 minutes to go. Having lost both centre-halves to injury in the same game, Barcelona were in a spot of bother.

A massive moment came in the 84th minute when Pedri sent in a cross to Ferran Torres in front of an open goal. The Spaniard could not make strong enough contact, and neither could Raphinha make anything of the rebound.

When all hope seemed lost, Robert Lewandowski scored an outrageous goal in the 93rd minute, stretching out to get onto the end of Raphinha’s inch-perfect cross.

With the win at Mestalla, Barcelona return to level terms with Real Madrid on the league standings though Los Blancos play their game tomorrow.