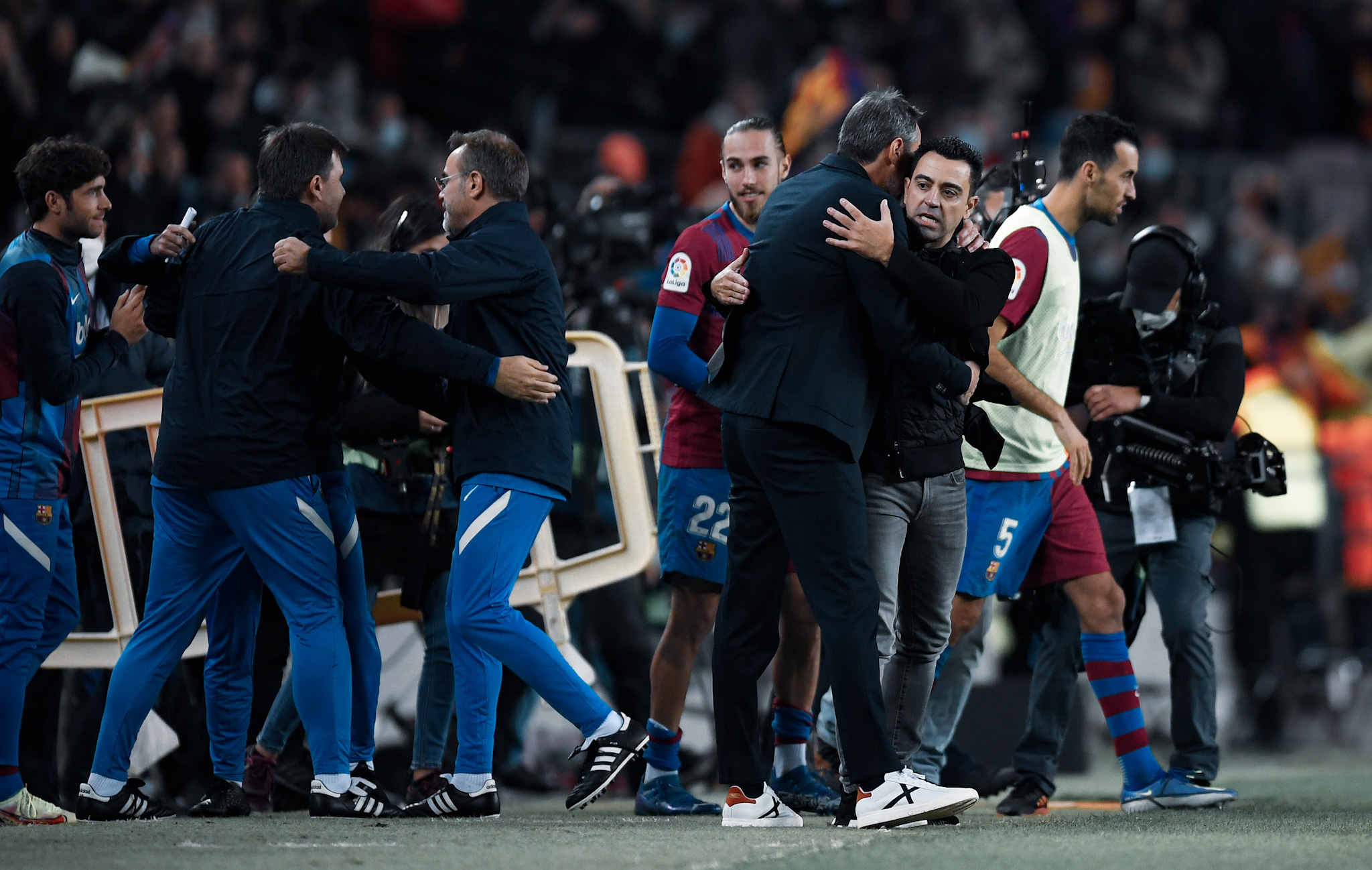 Memphis Depay inspired Barcelona to a victory in their first game after the international break. The Catalans were pitted against local rivals Espanyol in the derby. The atmosphere at Camp Nou was electric, for the occasion also marked Xavi Hernandez’s first game as the manager of the club he graced as a player.

The side looked flawless in the first half, and they should have buried many more chances. However, all was not smooth as the visitors threatened in the final ten minutes and were very close to equalising. Here are three takeaways from Barcelona’s 1-0 win over Espanyol.

When Xavi Hernandez arrived at Barcelona, he did not hold back to explain the merits and demands of his style of football. Much like the old Barcelona, the manager likes the wingers to stick close to the touchline, providing width and stretching the opposition.

That said, he did not hesitate to provide Ilias Akhomach with a start ahead of established names like Phillipe Coutinho. A constant feature of the game was that the wingers rarely drifted in centrally. On the occasions when they did, the full-backs or midfielders filled up the vacancy on the flank.

The added width helped Barcelona get behind the Espanyol defence over the top with relative ease.

Moreover, it enabled them to pass their way through the low block and create chances. Gavi and Ez Abde delivered strong performances on the wing. One can only wonder the impact Ansu Fati and Ousmane Dembele’s return to fitness can bring to this team, given that the style is tailor-made for them.

2. A proactive midfield under the greatest midfielder…coincidence or consequence?

There has hardly ever been any doubt over the quality of midfielders Barcelona had in their ranks. Spanish internationals Pedri and Gavi, the undeniable talent of Frenkie de Jong and Nico, alongside the experience of Sergio Busquets, is a manager’s dream. Yet, the midfield has never looked nearly as dominating as it should have.

Frenkie de Jong, Busquets, Gavi, and Pedri often look double their weight in gold for their national teams but were nowhere near while donning the garnet and blue. However, things were different on Saturday.

Frenkie de Jong played higher up and was an integral buildup of every move. He not only combined with Jordi Alba and Memphis Depay but also made constant runs into the box.

In the tight spaces of the opposition box, he displayed immense confidence on the ball and produced some scintillating passes. He scored a rather flashy goal with a chip as well, but it was disallowed.

Nico was excellent, too, breaking lines with relative ease. The youngster’s comfort with the ball helped Barcelona maintain the circulation of the ball. Meanwhile, Gavi was on his own mission in a new role on the wing, where he flourished.

The midfield was the team’s heart and spine, even off the ball. De Jong, Nico, Busquets, and even Gavi pressed high and won the ball in seconds every time the Catalans lost possession. The fact that this high level of performance in midfield came under arguably the greatest midfielder’s first game as the manager can only indicate bright spots ahead.

3. The first step of a long and exhausting journey ahead

The first half of the game was flawless from the home side. Espanyol barely had any room to breathe as they choked under Barcelona’s intense pressure. However, the same cannot be said about the second period.

The final fifteen minutes saw the visitors create counter-play against the tide of the game. One after another, waves of attack lashed out at Barcelona’s defence. For all their valiant efforts, Xavi’s side could not control the tempo in the critical period.

Espanyol could have not only equalised but probably gone ahead as they wasted a series of clear chances.

For 75 minutes, Barcelona were indisputably the better side. Yet, the closing fifteen minutes is where they have struggled in the past too, and that is yet to change.

It is still very early in the Xavi era to point out faults, yet what is essential is that the manager recognises the problem at hand. He also commented on the same at his post-match press conference.

“We have to be honest. There is a lot to improve. We’re not in the best emotional state. We’re still lacking confidence.”

One expects that the presence of Xavi and Dani Alves in the dressing room is the best possible way to reverse the situation. Yet, it is a long process and will require a good couple of months.