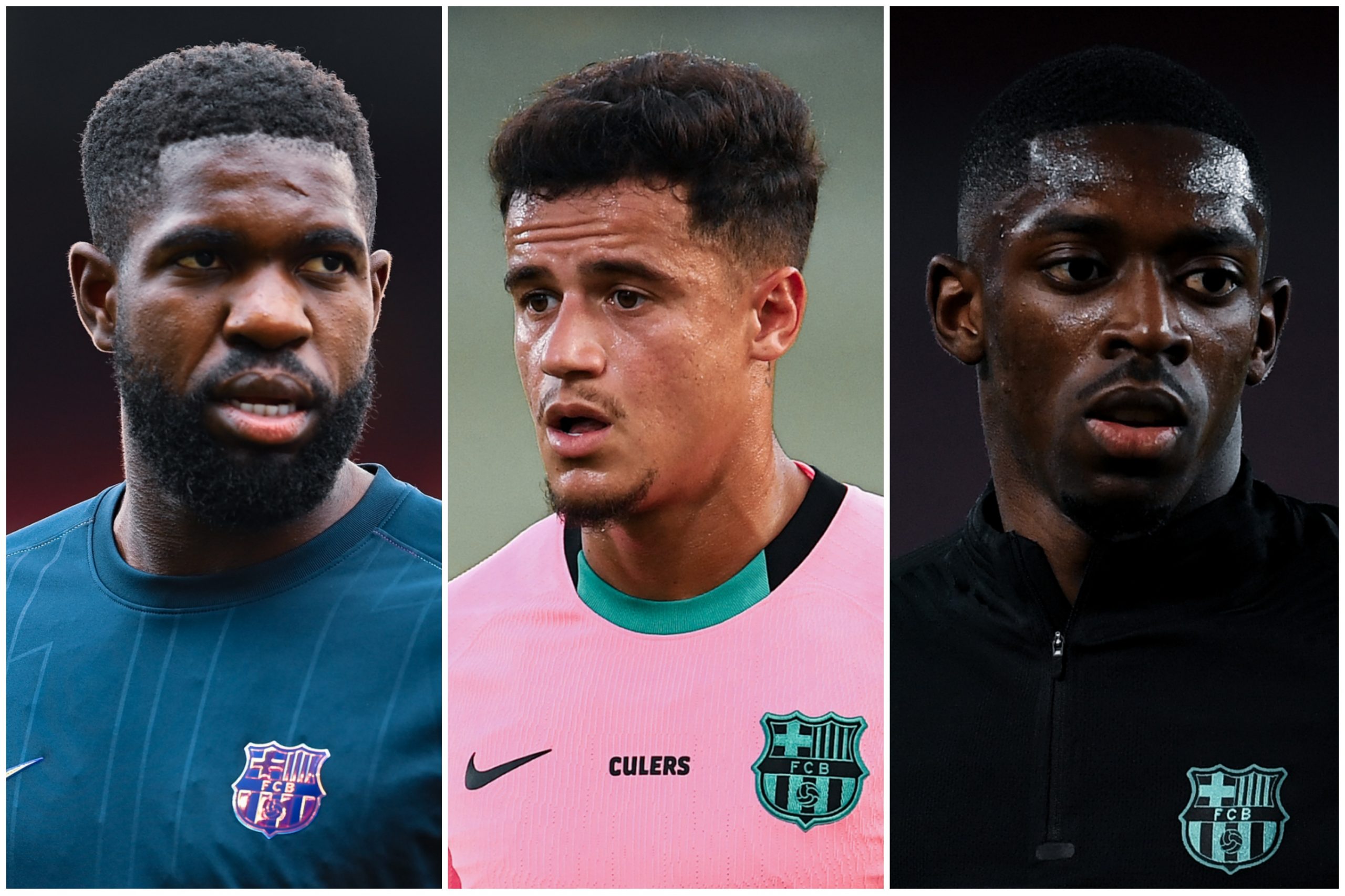 When we suggest that the financial situation at Barcelona is a cause for serious concern, we often look at the overall picture. However, if we delve deep, there are loads of things that need to be rectified. Starting from the board, which is back in safe hands ever since Joan Laporta returned.

The squad however, is far from complete. Cash-strapped Barcelona are in the rebuilding phase after a couple of mindless transfer windows that have brought the club down like a house of cards.

Previously known for their beautiful football, the current squad is among the weakest in Europe and is extremely vulnerable to any opposition, let alone other European elites. Fans hope the arrival of Xavi will change this for good, but after two games, it’s too soon to tell.

Over the years, the 26-time La Liga champions have time again spent exorbitant sums of money. Players such as Antoine Griezmann, Ousmane Dembele, and Philippe Coutinho have costed the club more than €400 million.

Moreover, uncalled for signings such as Kevin-Prince Boateng and Malcom are pertinent examples of how the club was managed by people who had no clue about football. Further, signing Miralem Pjanic while letting Arthur leave was a move that shocked the footballing world.

The latter, an exceptional player, was the possible future of the club. On the other hand, signing a midfielder who was way past his prime was not only a burden on the manager for game time but also on the wage bill that the club bears on its shoulders.

The club was not able to provide young and upcoming players with the platform that they needed, especially in dire circumstances such as the current one the club finds itself in.

Players such as Marc Cucurella or Alex Grimaldo probably deserved more chances than they got.

While players such as Gavi and Nico are gradually flourishing, promising players such as Riqui Puig finds are struggling for game time and, more often than not, find themselves on the bench.

It is about time that the once-mighty Blaugranas get rid of the deadwood that have been kept on massively high salaries and have barely made a positive impact as far as football is concerned. Barça Universal lists three players that Laporta and co. should offload in the January transfer window.

Throughout the course of Barcelona’s decorated history, the Camp Nou faithful have had the privilege of witnessing exceptional defenders. The likes of ex-manager Ronald Koeman, Carles Puyol, Gerard Pique, Javier Mascherano, among others have donned the garnet and blue, leaving everything on the pitch.

In 2016, it seemed as if the Catalan giants had found the perfect defender who would potentially be right up there with one of the best defenders in Europe and Barcelona with time.

Signed from Olympique Lyonnais, Samuel Umtiti was set to become an integral part of the squad, starting almost every game under Luis Enrique and Ernesto Valverde.

His tower-like presence, bravery, pace without the ball, and technical skills suggested that Barcelona had the perfect ball-playing centre-back in their arsenal.

But unfortunately, destiny had other plans for him.

The Frenchman peaked in 2018 when he played a pivotal role in the World Cup, lifting the coveted trophy with a star-studded Les Blues team. However, the party didn’t last very long, and everything fell apart for him, right in front of his eyes.

Too much desire and eagerness can come back to haunt you. That’s exactly what happened with Umtiti.

Right before the 2018 World Cup started, the Frenchman felt as if his knee was giving him trouble. It was suggested he undergoes surgery and miss the World Cup in Russia. This wasn’t in his plan, and nothing was stopping him from representing his country at the biggest stage of them all.

What actually ate 4-5 years of his crucial footballing career was not undergoing an operation even after the Coupe du Monde. Instead, he opted for conservative therapy, which didn’t give much joy to the talented centre half, and evidently so.

Injuries not only weaken you physically, but it’s a daunting task to get over them as far as the psychological part is concerned. So it is not surprising to see that the 27-year-olds spirit dampened as he has continued to fall down the pecking order.

He’s earning €8-9 million per season, which is too much for a club that is in tatters and too much for a player who hasn’t featured much for the club in recent years.

Players like Sergio Busquets and Gerard Pique have taken salary cuts to get players like Sergio Aguero registered. Umtiti, on the contrary, has actively refused to take one or even leave the club, becoming a real burden.

The Philippe Coutinho hype was real. Signed for a mind-boggling €140 million from Liverpool, he was considered as one the best-attacking midfielders in the world.

With a whip of a right foot, the samba flair, and exceptional range of passing, Barcelona had finally acquired what they were looking for. He was off to a flyer in a Barça shirt in his first season in Spain.

In the 2017-18 La Liga campaign, the former Liverpool man played 18 matches, scored goals, and set up five for his teammates.

However, as the months progressed, the Coutinho run subsided, and there was itchiness and impatience amongst the fans. Was he, in fact, the right man for the club?

At Anfield, Coutinho was always a number 10, playing behind a striker and taking attacking positions. He was also used as a left-winger, but his run there was consistently inconsistent.

The attacking midfielder position never essentially existed at Barcelona beyond Lionel Messi. He could be deployed as a left-sided midfielder or a left-winger, but that wasn’t really his natural position.

On top of that, there were tremendous expectations placed on him. Playing for a club with such a glorious history isn’t everybody’s cup of tea. The little magician was touted to replace one of the best midfielders the world has ever seen in Andreas Iniesta.

During Ernesto Valverde’s time at the club, he deplyed a 4-4-2 formation wherein Coutinho was slotted at the left or the right-hand side of the park, depending on whether Iniesta was playing.

Although, it did work for a short time, Barça had to grow around the squad, and a 4-3-3 needed to be used. Soon, the manager tweaked his tactics and adopted the formation.

That didn’t change much as the formal Liverpool man was concerned. He came off the left but didn’t succeed because he wasn’t a winger who could terrorise defences. He was a player that could split up lines with one brilliant pass, but with limited space, his ideas were often confined. Coutinho as a winger didn’t tick too many boxes.

Fast forward to the Ronald Koeman managerial tenure. Koeman was desperate to fit him and played 4-2-3-1, where he was at his favourite position, with Messi up top.

But he couldn’t create a massive impact and soon found himself on the bench. Despite his lack of good performances, he did end up getting various opportunities to prove himself but unfortunately for the player, it didn’t come to any fruition.

Lastly, the 29-year-old is one of the highest-earners in the squad, and Barcelona is in no position to keep paying a player who barely has anything to offer.

Signed for an astonishing €135 million, the winger hasn’t come close to proving his worth to the fans and the club.

Dembele recently came back from a 13th major injury during his time at the club and hopes to be back at his absolute best, a sight that fans can’t wait for. He showed flashes of his potential last season in his first full season in 4 years but was far from being consistent.

Of all the players on the transfer list, the situation at hand with Dembele is a tricky one. Xavi and Joan Laporta want the 24-year-old to stay even though the history of injuries suggests otherwise.

There’s no certainty that the French international will renew his contract. The board fears to let go of such a promising talent who was on another planet at Borussia Dortmund and could potentially peak at another club.

The complex situation would soon need to be resolved as it’ll only benefit his next destination should he leave for free. More so because the player is on the radar of many clubs including, Manchester United, who have been linked with him before.

While some fans have run out of patience for the player, others still believe he has a lot to offer, provided he remains fit. The fact is that whenever he has stepped onto the grass, he hasn’t ever fulfilled the expectations of fans and the board. Economic crisis coupled with indecisiveness; Dembele should, ideally, be on a very short lease now.