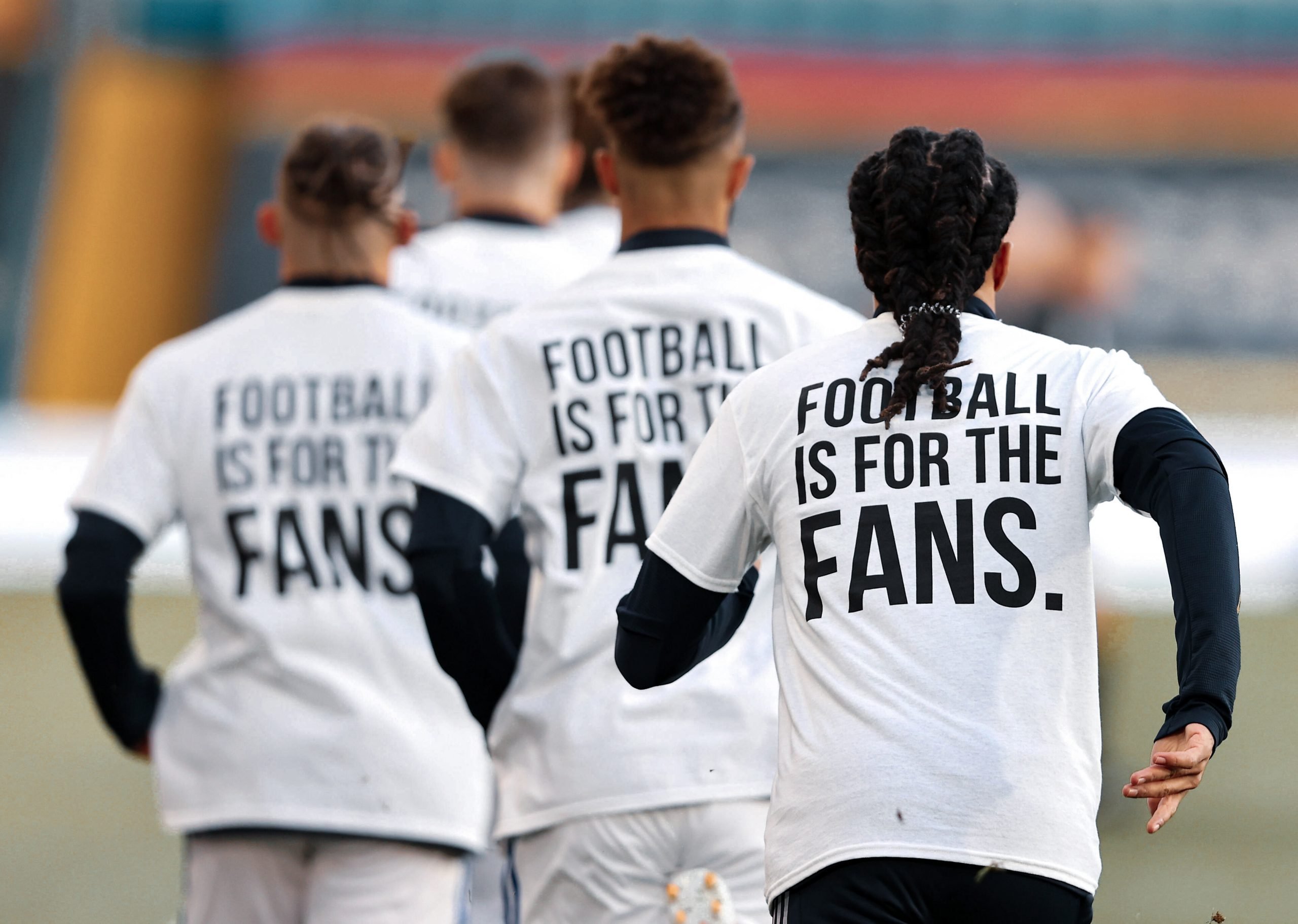 Football has arguably suffered its most torrid weekend in recent history. With the announcement of the European Super League and its eventual, and hopefully permanent demise, football fans may well have witnessed the most heartbreaking followed by relieving saga the sport will offer for a long time. It is a tale of pure bliss versus greed. A tale of the working class’ sport versus monopolisation; a tale with the joy of victory for the ‘good guys’.

The formation of the Super League

It all started on a peaceful Sunday evening, when suddenly, several reports about the new competition flooded social media. While fans were familiar with the concept already, as it had been discussed by the visionary Arsene Wenger, and also funnily enough by Josep Maria Bartomeu during his resignation speech, no one gave the competition much thought. It seemed that a competition as glorious and legendary such as the UEFA Champions League would be near impossible to replace.

However, the mastermind behind it all – Florentino Pérez – had been underestimated. While a plan for the Super League had been in the works for very long, the idea was sped along due to how severely affected all the European giants were by the pandemic. Several revenue streams had been cut off for the foreseeable future. Real Madrid and Barcelona, among others, have impossibly high variable costs to maintain without a large influx of cash, which they seem to be losing.

Therefore, Pérez expedited the formation of a Super League in order to guarantee that big clubs such as the one he is President of would have their futures secured. In doing so, the 74-year-old acquired funding from American banking giant JP Morgan, who agreed to debt finance the competition with an amount of over €6b. What was initially believed to be a risk-free plan turned into chaos right from the get-go.

Once the competition was finally announced, it is safe to say the footballing world broke into smithereens. Most of the outrage, both from governing bodies as well as fans, was based around two things: the competition’s anti-meritocratic nature and the unfair financial boost for a select few clubs.

The Super League was set to be formed by 12 founding clubs, who would hold ‘permanent’ status in the league. This meant that no matter how poorly they performed in the ESL, they would not be relegated. The 12 clubs had confirmed their participation in such a roster of ‘permanent’ clubs: Real Madrid, Atletico Madrid, Manchester City, Manchester United, Tottenham, Arsenal, Liverpool, Chelsea, Inter Milan, AC Milan, Juventus, and of course, Barcelona, who are in huge debt.

These clubs would receive a figure of around €100m-350m, simply for joining the league. This amount would be financed by the previously mentioned fund from JP Morgan. Additionally, Champions League prize money looks minuscule compared to what the ESL would supposedly offer to its founding clubs per year — approximately €250m a year. Given the impact of the pandemic on all these big clubs, they all agreed to join the league, with the dollar signs flashing brightly on the eyes of board members and founders such as Andre Agnelli and the Glazers.

Following such an announcement, the outrage of the fans could not be contained. Firstly, the competition does not allow for the relegation of its founding clubs. This is against the very meritocratic nature of football and makes the meaning of ‘losing’ feel a lot shallower.

Additionally, only five clubs would be allowed to qualify each year based on their performance that season. This means that smaller clubs such as Ajax or Porto would rarely get the chance to perform on the biggest stages in Europe again, two clubs that have previously lit up the Champions League with jaw-dropping underdog stories.

In addition, the biggest pay-checks in football would now be split between just twelve clubs, as they would steal all the eyes from the Champions League into one single elitist, exclusive competition, not allowing for the financial growth of smaller clubs. The feeling towards such a competition can best be described through an infamous banner which was on display against PSG by Tunisia’s Club Africain, “Created by the poor, stolen by the rich”.

Many fans felt hopeless; with the combined power of money, greed, and the most influential figure in football spearheading this campaign, it seemed there was no stopping the formation of this league. While UEFA and the domestic leagues across Europe banded together and threatened to exclude these 12 clubs from domestic competitions, the threats felt empty as even these bodies could not do without their highest-earning clubs.

The fight for football; the fight against greed

It did not take long for the footballing world to come together in protest of such an elitist, anti-football institution. Almost all fans, players, and coaches understood the harm that such a competition would cause to football going into the future, and in a fashion never seen before, they seemed to band together online unitedly. The power of the sport was truly demonstrated for the following three days, as the world of football came together to try their best to deter the formation of the ESL.

Several players took an outspoken stand online, including Manchester City star Kevin de Bruyne on Twitter. “I have worked and competed against everybody trying to win the ultimate. But the most important word in this is COMPETING,” said the Belgian star. Gerard Pique, all the way from Barcelona, took to Twitter as well to express his discontent: “Football belongs to the fans. Today more than ever.” Other footballers who openly expressed their opposition to the ESL included Ander Herrera, Aymeric Laporte, and Dani Alves, and many more.

It is inspiring to see players express themselves online, and boldly taking a stand against the formation of a league that disrespects the sport. One of the most wonderful positions came from the Liverpool F.C. players, lead by Jordan Henderson, who released a collective statement on the competition: “We don’t like it, and we don’t want it to happen. This is our collective position.”

Not soon after, coaches seemed to follow suit. Jurgen Klopp could not hold himself back during his pre-game presser ahead of the Leeds United clash, confirming that he was not in support of the idea at all. Meanwhile, Leeds appeared before the cameras with customised t-shirts that read, “Earn it” with the Champions League logo.

In a bold statement, Pep Guardiola went against his very own superiors — who had agreed to City’s participation in the ESL – and spoke out against the idea of the competition. “Sport is not a sport when success is guaranteed, and when the relation between the effort and reward don’t exist. It’s not a sport when it doesn’t matter if you lose. It’s not fair if teams fight at the top and cannot qualify.”

Pep’s former teammate Ronald Koeman, too, spoke against in a press conference before the Getafe game, saying that he agreed with Pique’s tweet.

Thankfully, for the footballing world at large, the effort of the fans, players, and coaches did not go unnoticed, as on Tuesday night, reports suddenly burst through a floodgate surrounding the exit of all the clubs that had priorly agreed to participate in the league.

The mass exodus seemed to have started with the reported exit of Chelsea. Soon after, United, City, Tottenham, Arsenal, and Liverpool followed. All of a sudden, Pérez’ master plan began to fall apart totally. Several reports began coming out about Barcelona’s doubt too, claiming that there would be no chance of the Catalan club’s participation without the agreement from club members in a referendum. Soon after, Atletico Madrid also announced their intention to exit the league.

The three Italian clubs that were participating also exited the competition, releasing official statements. However, the most interesting statements came from the English clubs, with wonderful public apologies to the fans. Liverpool owner John W Henry issued a public apology. “I want to apologise to all the fans and supporters of Liverpool Football Club for the disruption I caused over the past 48 hours. And I want to apologise to Jürgen, to Billy, to the players and to everyone who works so hard at LFC to make our fans proud.”

Arsenal even openly admitted their withdrawal from the ESL was a direct consequence of the fans’ outrage, publishing a public statement on Twitter. “As a result of listening to you and the wider football community over recent days, we are withdrawing from the proposed Super League. We made a mistake, and we apologise for it.”

As a result of listening to you and the wider football community over recent days we are withdrawing from the proposed Super League.

We made a mistake, and we apologise for it.

With such an exodus having occurred, only two clubs remain in the competition: Barcelona and Real Madrid. However, it seems nearly impossible that Barça will continue being a part of this project, as, without a vote from the referendum, they are not allowed to take part. The wonderful perks of democracy.

To think that the battle between monopolisation, financial greed, and business-oriented ownership of the beautiful sport was actually won by the fans and the love of the sport is a wonderful thought. The Super League would exclude most of the clubs from Europe and steal the spotlight for a select few clubs who would keep all the eyes and money in the sport from themselves.

Yet, from a united effort from the fans online, clubs actually turned on the idea, valuing their fanbases over a few extra yachts for their board members. In true domino-effect fashion, Ed Woodward resigned as executive Chairman of Manchester United, while there is immense pressure on Florentino Perez to follow suit.

The lesson from this chaotic saga

Therefore, the greatest lesson from the European Super League saga is this: the power of the fans can never be underestimated. Additionally, while football is a massive global business, and the Champions League is a competition with a tremendous amount of money in it, we have also learned that the sport must not be outrightly exploited but rather respected in a way that all clubs can get a chance to compete.

A balance must be found between business and football. At the same time, it is ethical that clubs such as Madrid and Barça will always be financially bigger than most other clubs, they must not outrightly abuse their power in an elitist fashion as the ESL aimed to do, purely for monetary gain.

Besides, no matter how rich a club may be, it can always be defeated by a lesser club, and that is the very essence of football. As Johan Cruyff once famously said, “I have never seen a bag of money score a goal.”