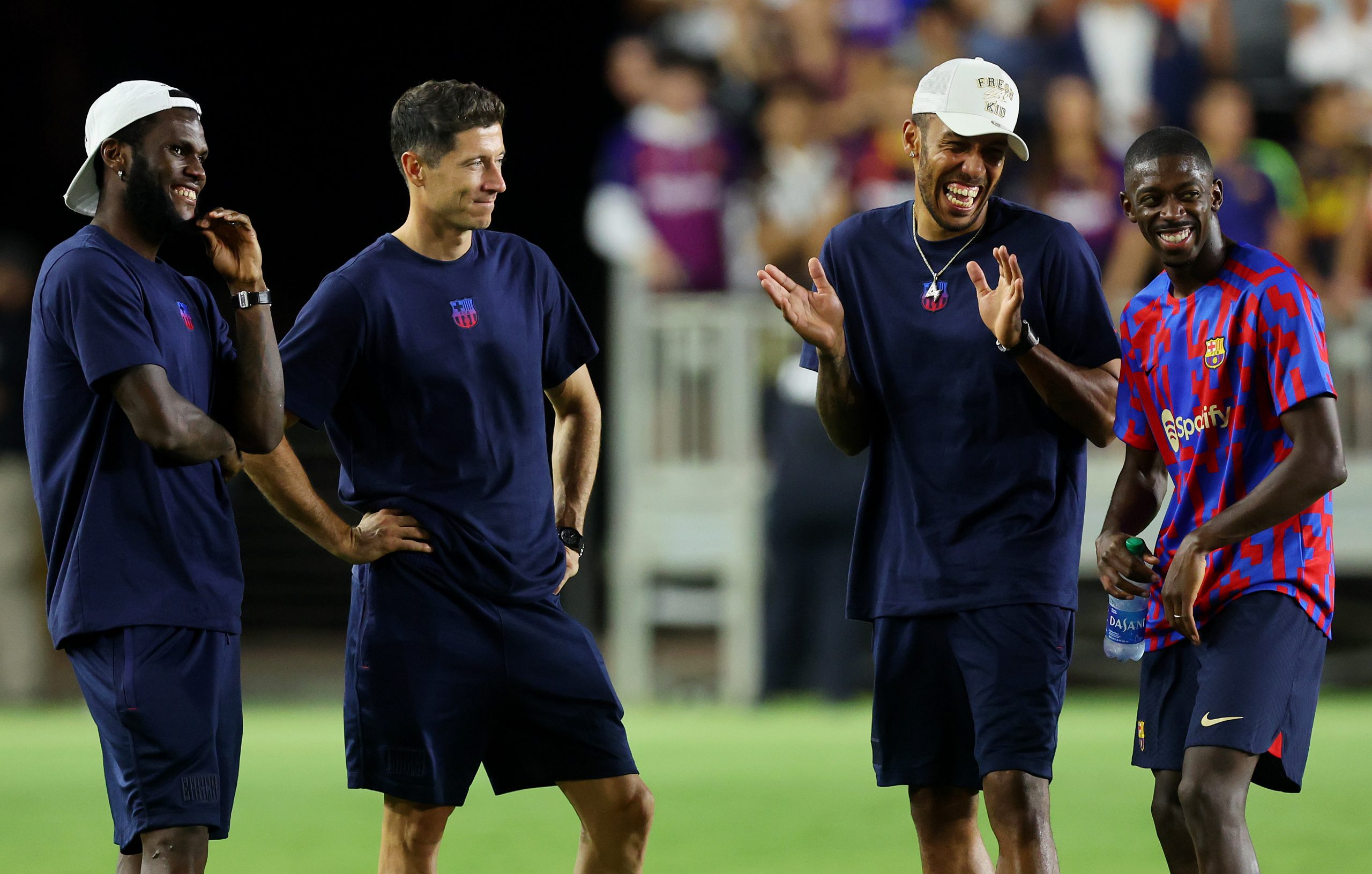 When Xavi arrived last season, his best attacker in the squad was Memphis Depay, who as struggling with form and injury himself. Ansu Fati was still unfit, Martin Braithwaite and Ousmane Dembele sidelined Luuk de Jong out of favour, and Philippe Coutinho out of depth.

Barcelona scraped through a 1-0 win against RCD Mallorca, but the highlight was the attacking trident of Jutgla, Luuk, and Ilias. Estanis Pedrola came off the bench in the last ten minutes, but has not been seen since.

Fair to say, the club has taken a huge leap forward since then. Xavi got the services of Pierre-Emerick Aubameyang and Ferran Torres at his disposal in January, while Dembele returned to form.

And in even better news, the Blaugrana have acquired Robert Lewandowski and Raphinha this summer, while Ansu Fati is very close to full fitness. With six forwards as exceptional as these, Xavi has a near-unlimited arsenal of combinations.

In fairness, the club still has the services of Memphis Depay, Ez Abde, and even Martin Braithwaite, but it seems unlikely that either of them stays ahead of next season.

Memphis is linked with a few clubs, including Juventus and Chelsea, and with a €20 million price tag, is definitely an affordable options for top clubs.

Abde, on the other hand, is set to leave on loan within La Liga after renewing his contract with the club. Unfortunately, unlike Abde, Braithwaite is not ready to leave Barcelona despite having a handful of offers on the table.

Well, more specifically, he can mix and match these six forwards and make a whopping 36 attacking tridents (assuming he’ll stick with a 4-3-3) next season. Let us break this down.

Of the six, Ferran Torres is inarguably the most diverse attacker. He started his career playing on the right, was deployed as a striker by Pep Guardiola, and even gained some experience playing on the left wing under Luis Enrique and Xavi.

His off-the-ball movement allows him to play across the front three with ease, with almost similar efficiency.

Ousmane Dembele is comfortable on either wing owing to his bizarre two-footedness. He’s obviously more used to playing on the right, but has no problems shuffling flanks.

The same goes for Raphinha, who is primarily a right-winger. According to his own word, though, he can play on the left, too. In fact, he was used there vs New York Red Bulls during the pre-season friendly.

Ansu Fati and Pierre-Emerick Aubameyang can occupy two positions each — the left-wing and centre-forward. The latter is more comfortable centrally, while the former on the left. But can certainly pull off a job in either role if push comes to shove.

Finally, Robert Lewandowski is the only forward that can only play in one position of the three: as a striker. That’s probably good for Xavi, though. He is among the best strikers of all time, and will likely not be a subject of too much rotation.

In the past, Dembele has played as a striker to fill in a void, but that was a very temporary fix and will probably not happen anytime soon. Similarly, Fati has not played on the right-wing since his breakthrough season under Ernesto Valverde.

Using each player in all their respective roles possible, Xavi has the option of creating 36 different attacking trios. Each combination is listed below in the table.

However, some of them are obviously more likely than others.

The Barcelona legend has opted to use one runner, one creative winger, and one focal point striker as his ideal attack. Last season, we saw this as he stuck Torres on the left-wing, Aubameyang as the striker, and one of Adama Traore or Dembele on the right.

Torres and Fati boast of excellent associative play and can move inwards, combining with the striker. Both of them have natural striker instincts and are much closer to an SS role than pure wingers.

Right off the bat, the most obvious sticking roles are Fati and Torres on the left, Lewandowski and Aubameyang centrally, and, Dembele and Raphinha on the right.

Raphinha’s crossing would work in tandem with Fati and Torres’ darting runs into the far post, while Lewandowski has elite box movement. Dembele, specifically, would benefit a lot with the ex-Bayern striker in the side given his tendency to play crosses from the touchline.

Lewandowsi’s presence also helps Raphinha in some ways. The Brazilian often likes to play one-twos and move inside or to the edge of the box before cutting in and shooting.

With Lewa occupying defenders, it should give Raphinha more space to operate liberally, both inside and outside the box.

In contrast, Dembele – Lewandowski – Raphinha is also possible, and was also used recently, but has minimal ball retention and is unbalanced. The same goes for something like Fati – Aubameyang – Torres, where with three runners, the box is likely to be overcrowded.

Auba was used on the left-wing once by Xavi in pre-season, but it’s unlikely that happens too often during regular season. The striker can fill in there owing to his pace, but struggles to mirror his goalscoring exploits.

If it does, though, Aubameyang – Lewandowski – Raphinha/Dembele is the closest possible balanced trio there.

Speaking of improbable attacks, there is very little chance that Fati or Torres get a shot in the middle of the attack this season. If they do, though, they should be paired up with one of Dembele or Raphinha on the right, with another runner on the left.

Whiel we have largely discussed attacking tridents, there will be games where Xavi will be forced to deploy more than three forwards at once on the pitch.

When chasing games, it is entirely possible that he throws on four attackers. Raphinh can be used as an attacking midfielder while Dembele stays on the right. Pedri and Gavi, too, can occupy that #10 role, with more defensive resilience than the Brazilian.

Aubameyang and Lewandowski can be deployed together in a 4-4-2, too, for an example, with Dembele and Raphinha on either side as the creative outlets.

Either way, with options galore, this is exactly the kind of headache Xavi has explicity said he wants at Barcelona – two starting-quality players in each position. This season could decide which of them have a true shot at a Barcelona future, though.