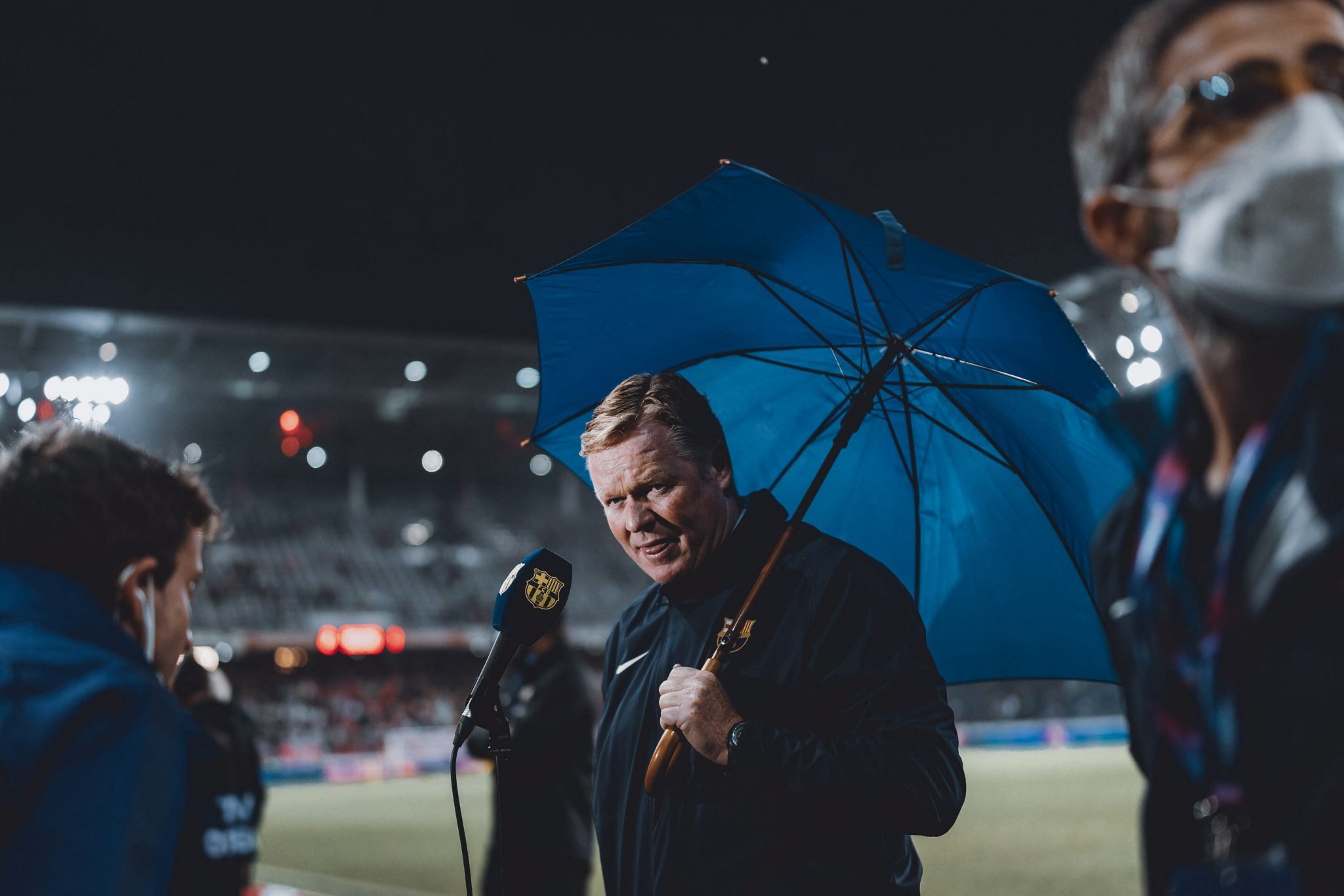 Not even a year has passed since Ronald Koeman was appointed as Barcelona manager by the controversial figure that was Josep Maria Bartomeu, a day that now seems like a lifetime ago.

The story of the 20/21 campaign was certainly a whirlwind, with ups and downs consistently one-upping each other, but even in the good times this season, it felt like there was always an underlying layer of negativity that surrounded Koeman.

They say negativity breeds contempt, and the last president’s board had its fair share. That seemed to transfer over to Koeman, as from the get-go, the media and fans were sceptical, singling out his lack of tactical limitations and failures at past clubs – despite making considerable progress with the Dutch national team in his previous role.

This even rubbed off the presidential candidates before the votes were even counted back in March; with Victor Font saying that Barcelona legend Xavi Hernandez would be his manager next season and Joan Laporta certainly had others in mind, going off the drama that surrounded the current president’s meeting with Koeman at the end of the season.

However, Koeman carried on knowing that his status as a Barcelona legend would buy him some time. Koeman’s reign began amid turmoil, with the club’s greatest ever player Lionel Messi expressing his desire to leave, whilst at the same time, the team had a poor start to the season – the club’s worst since the 1987/88 campaign.

This was followed by a run of 19 games unbeaten in the league and success in the Copa del Rey, a period that rallied many people behind Koeman’s cause as manager. However, the aforementioned negativity reared its ugly head again in the form of the Champions League defeat to PSG and a late slip up at home to Cadiz.

The final act of the season saw Barcelona fall out of the title race, securing only eight points out of 18 in their final six games, once again putting Koeman’s future in doubt.

Despite his failings, Koeman did the job he was hired to do. Barcelona progressed under the Dutchman’s leadership, youth got their chance to step up, and the club won it is 31st Copa del Rey – something Laporta realized in the end – after failing to find a better successor.

Job done, but massive room for improvement is how the season might be reviewed. The 21/22 season gives Ronald Koeman a chance to re-write the wrongs of the previous campaign by fixing notable mistakes and proving himself to the football world that he deserves a seat at the top manager’s table – a task that has become even harder now that Lionel Messi has departed the club.

May 11th, 2021, the La Liga season was concluding with two teams racing towards the title, with Barcelona falling to outsiders due to recent results. The Catalan side travelled to the Estadi Ciutat de València to face Levante. What followed majorly highlighted a flaw of Ronald Koeman’s management that had been evident all season – poor in-game management.

After a good first-half display, Barcelona led the Valencian side 2-0 at halftime. The men in pink just had to see it out, but Koeman decisions left the Catalan side flying home with their tails between their legs.

Having to go off at halftime injured, Koeman first mistake was replacing Ronald Araujo with Sergi Roberto whilst leaving one of the season’s standout players Oscar Mingueza on the bench. Roberto was later at fault for both of Levante’s goals, leaving the scoreline at 2-2.

Barca’s lead was restored through Ousmane Dembele, but then Koeman decided to make three substitutions taking both Dembele and Antoine Griezmann off with the game far from being over. This meant that when Levante levelled the game at 3-3, the need for attacking quality on the pitch was not present.

The Roberto decision is somewhat understandable. The Spaniard is experienced, good with the ball at his feet and a better passer than Mingueza, which all help to control the game. In hindsight, it was the wrong call, but at least you can see where the backbone of the decision.

Taking off Dembele, Griezmann and Pedri, three players key to the teams’ attacking play with the game still in the balance at 3-2, was a decision that left many confused. The 81st minute is considered too early for a team like Barcelona to be shutting up shop, and once the game was levelled, that was essentially it for Koeman’s side.

This is a trait that Koeman displayed all season long and was visible as early as October 24th, the first Clasico of the season. Trailing 2-1 to Real Madrid, the Dutchman brought on four subs in a five-minute window between minutes 82 and 87.

This was the Barça managers way of changing the game, replacing bodies in the hope that something changes. Bringing on so many players at once normally has an adverse effect: as it disrupts the team’s rhythm whilst not allowing the newly introduced players enough time to adapt to the games tempo and the norm prevailed here, with the Catalan conceding another to lose 3-1.

Throughout the 54 games played in the season, the former Everton gaffer used more than the traditional three subs 45 times. This is all well and good when games are wrapped up, as it gave extra players a rest during a condensed season, but when games are close, throwing on player after player often does more harm than good, and that was the case for Barcelona this season.

This is a habit that Koeman needs to cast aside next season and should look at changing games more effectively through adjusting the team’s formation or players positions to that particular games desired needs.

A formation might just be numbers on a page for some, but for Barcelona, the numbers 4-3-3 represents an identity around which the club revolves. It is a setup that is institutionalised into the Catalan club’s lower levels at their infamous La Masia academy, which allows players to be integrated into the higher levels seamlessly.

The lack of a stable formation was another fault of Koeman’s Barcelona side, and it was one of major concerns to President Joan Laporta’s board if reports are to be believed. SER Catalunya stated after the pair’s meeting that the 4-3-3 and a more attacking style were the only things the Barca president asked of Koeman if the Dutchman was to continue – pointing to Barca Femení as an example.

Introduced in February against Sevilla, Koeman’s most successful set-up was the interchanging 3-5-2/3-4-3 system. This gave more responsibility to the fullbacks, helped defensively, and gave more control and creative freedom to the midfield three. However, there are many flaws to this system, which were exposed over time and the Barça manager himself even labelled it “risky”.

Barça’s press was often bypassed easily due to difficulty in pressing with such few numbers, gaps often appeared between the defensive and midfield line, which caused the Catalan side problems when opponents transitioned and whenever Koeman’s men had to defend, it was difficult to get players up the pitch to transition quickly and effectively.

The 4-3-3 is easier to press in, effective in controlling the middle of the park and two attackers can be left up top for transitions using the 4-4-2 as the defensive shape. The second Clasico of the season highlighted the difference of both formations, where Barca were much improved in the second half with the 4-3-3 in use.

Next season it is expected that Koeman will use the 4-3-3 after Laporta’s apparent request. The lack of a set formation is a mistake that cannot be repeated by the Dutchman next season, as the chaos it can cause could have a disastrous effect on the club, from the highest level to the lowest.

If you ask a Barcelona fan what annoys them most about Ronald Koeman, the Dutchman’s agendas will not be far from the top of that list. It was a trait that surprised many, but maybe it should not have considering previous tales from one of his previous players Oumar Niasse, who the Barça manager mistreated during his time at Everton.

In Catalunya, Koeman’s victims were Riqui Puig and Miralem Pjanic, two players who were reduced to very little game time – with the treatment of the former causing huge uproar.

Puig’s emergence into the first team was one of the few highlights from the disastrous 2019/20 season, with fans falling for the 22-year-old’s unpredictable style of play. The young Spaniard was expected to develop even further this season, but Koeman did not take a likening to him for whatever reason. This resulted in Puig playing just 581 minutes across all competitions, a gigantic 2,945 minutes less than fellow youngster Pedri.

This matter was another Joan Laporta publicly commented on, and the extent of the president’s affection for the 21-year-old was seen at Barcelona’s 21/22 kit launch, where the pair were seen talking and laughing together.

While discussing Riqui Puig’s future, Joan Laporta told La Vanguardia in June, “For me, he is a player of extraordinary quality – someone who is of strategic importance for the club due to his way of playing and understanding the game.”

It is well known that Koeman wanted to send Puig out on loan last season, but the midfielder chose to stay and fight for a spot in the first XI.

Going off Laporta’s comments, that is not a possibility for the upcoming season either and will leave Cules wondering how the young Spaniard will fit into the Koeman’s plans next season after the treatment he received during this one.

Miralem Pjanic also received this treatment playing just 1,295 minutes, which is very little for a veteran who was brought to the club for €65 million last summer. Last season, Barça could have done many times with the Bosnian’s ability to shoot from range, but Koeman opted for a midfield three, deeming them undroppable post-Christmas.