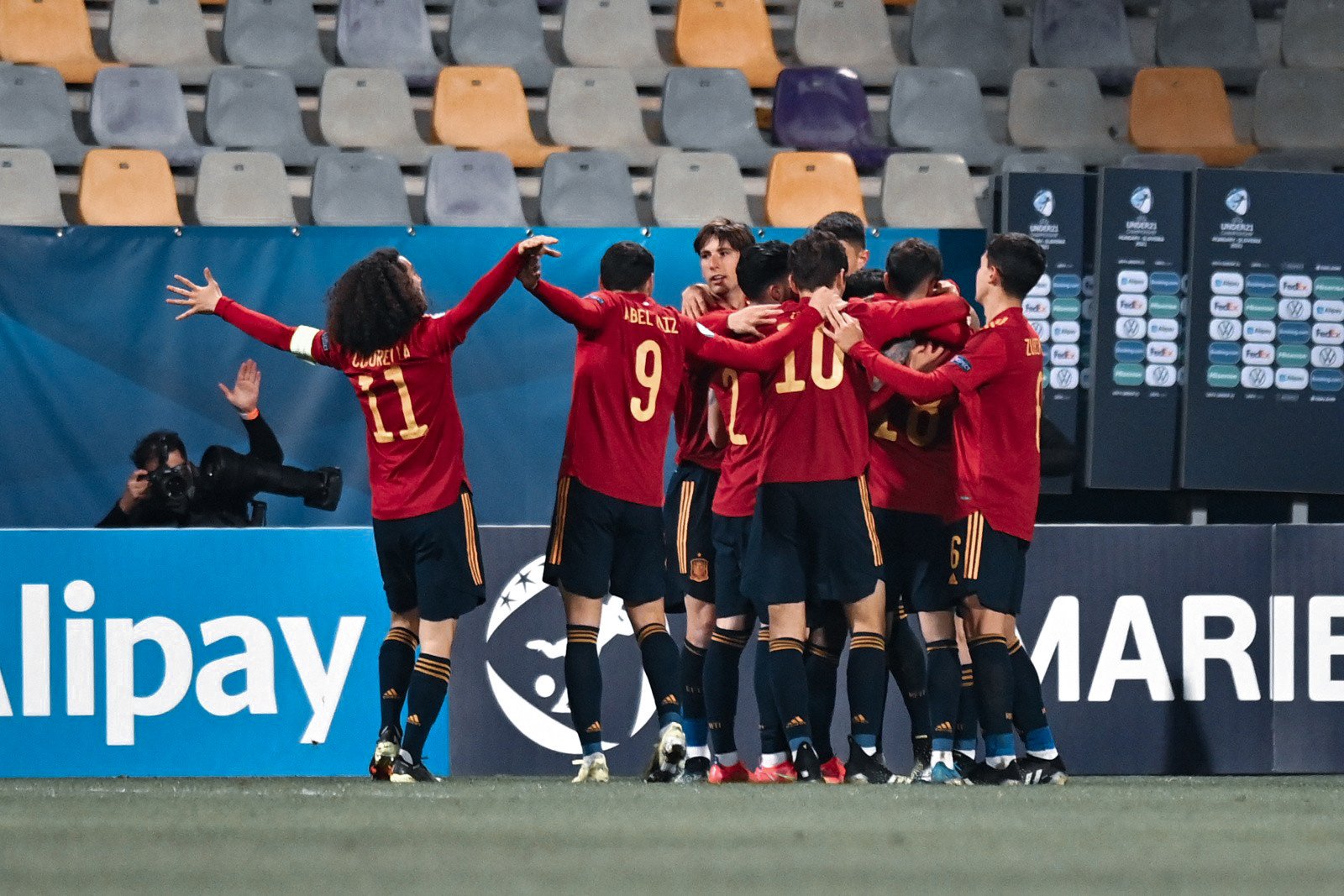 The 2019 Euro U-21 was a fest of beautiful football, players with raw talent and managers balancing youth development and tactics. As a Spanish side with star names such as Fabian Ruiz, Dani Ceballos, Carlos Soler, Ferran Torres went on to win the tournament, few were surprised. There was a tangible feeling of excitement before the tournament. This was a squad full of electrifying players who were proving themselves on the biggest stages.

This time around, the situation is slightly different. The players are relatively inexperienced in terms of their club football. The feeling surrounding this team is that of an underdog. France, Netherlands, England and Portugal have much stronger squads.

The Spanish under-21 side faced Slovenia in the first match of the tournament yesterday. In this match review, we look at how they performed and how players affiliated with Barcelona performed in the 0-3 victory.

Coming into the match as firm favourites, the atmospheres around the camps of the teams had reversed within 45 minutes. La Roja came into the match full of confidence. After all, they were expected to win it comfortably. Slovenia, on the other hand, came into the match, expecting hell against the country that has won this competition the most. Fast forward 45 minutes, and the anxiety was visible amongst the Spanish youngsters.

The first half was riddled with individual mistakes as well as mistakes as a collective by the Spanish under-21 side. This was a team devoid of ideas and lacking dynamism. Lining up in a 4-5-1/4-2-3-1, maintaining possession wasn’t the challenge, and neither was progressing the ball forwards. The trouble started in the final third. Slovenia would allow Spain to keep the ball but allow no ways to threaten the goal.

Spain were at a crossroads. They wanted to play the sort of game you’d expect from a Spanish side. However, the starting XI wasn’t the kind that could optimally implement that system. For example, the positioning of ex-Barcelona striker Abel Ruiz was that which would complement incisive wingers or inverted wingers.

Ex-Barcelona left-winger Cucurella, however, is by no means an incisive player. Brahim Diaz was a breath of fresh air down the right. Cucurella would stay wide, which would deprive Juan Miranda, the left-back, of the space he does so well to exploit.

In midfield, Slovenia were surprisingly dominant. Their pressing was good, and they look to impose themselves physically. In the end, they were unable to sustain attacking play due to pure inferiority of quality. However, had the teams been even remotely close to equal in terms of pure talent, the match would have ended up in a win for the hosts.

Luis De La Fuente’s side made zero changes at halftime, much to everyone’s surprise. The match resumed and continued the same way it had for the first 45. Until inspiration struck. During a period of sustained attacking play, Espanyol forward Puado was screaming for the ball in the box. As it came bouncing to him, a sweetly-struck half-volley saw the net bulge as the scoreboard now read 0-1.

Just 2 minutes later, Puado got the ball in Spain’s half and released Cucurella with acres of space down the left. Dribbling into the final-third, he crossed the ball into the path of Roma’s Gonzalo Villar. Wearing the number 10 jersey, he opened up his body and caressed the ball into goal. The goalkeeper stood no chance. The finish was as polished as can be.

Since the first half showed that the midfield was sluggish and uninspired in the final-third, changes were expected. Manu Garcia was the first substitution that really changed the game. His quality on the ball is undeniable, and the game seemed to flow through him once he established his presence on the field. Along with him, Osasuna’s Jon Moncayola came on for Marc Cucurella. He would tuck in, which allowed Juan Miranda much more freedom, leading to the third goal being scored by the left-back.

Unfortunately, Barcelona players Riqui Puig and Oscar Mingueza didn’t get any minutes. The spotlight was shared by many players, out of which many who result in a smile on the face of Culés. In defence, Jorge Cuenca was solid and reliable. Though a Villareal player, Barcelona have a buyback clause allowing for him to return to the Camp Nou. Marc Cucurella and Juan Miranda were impressive down the left. They provided stability to the team that the right side of Brahim Diaz and Pipa couldn’t.

This victory sees Spain go top of group B. Up next, Spain face Italy on 27th March. Italy are in a situation similar to that of Spain. Both teams are clearly inferior to the squads that they have seen in the past. However, a win against the Azurri would put Spain in a comfortable position to qualify. More than the result, supporters of La Roja would be hoping for a better performance from Luis De La Fuente’s side.