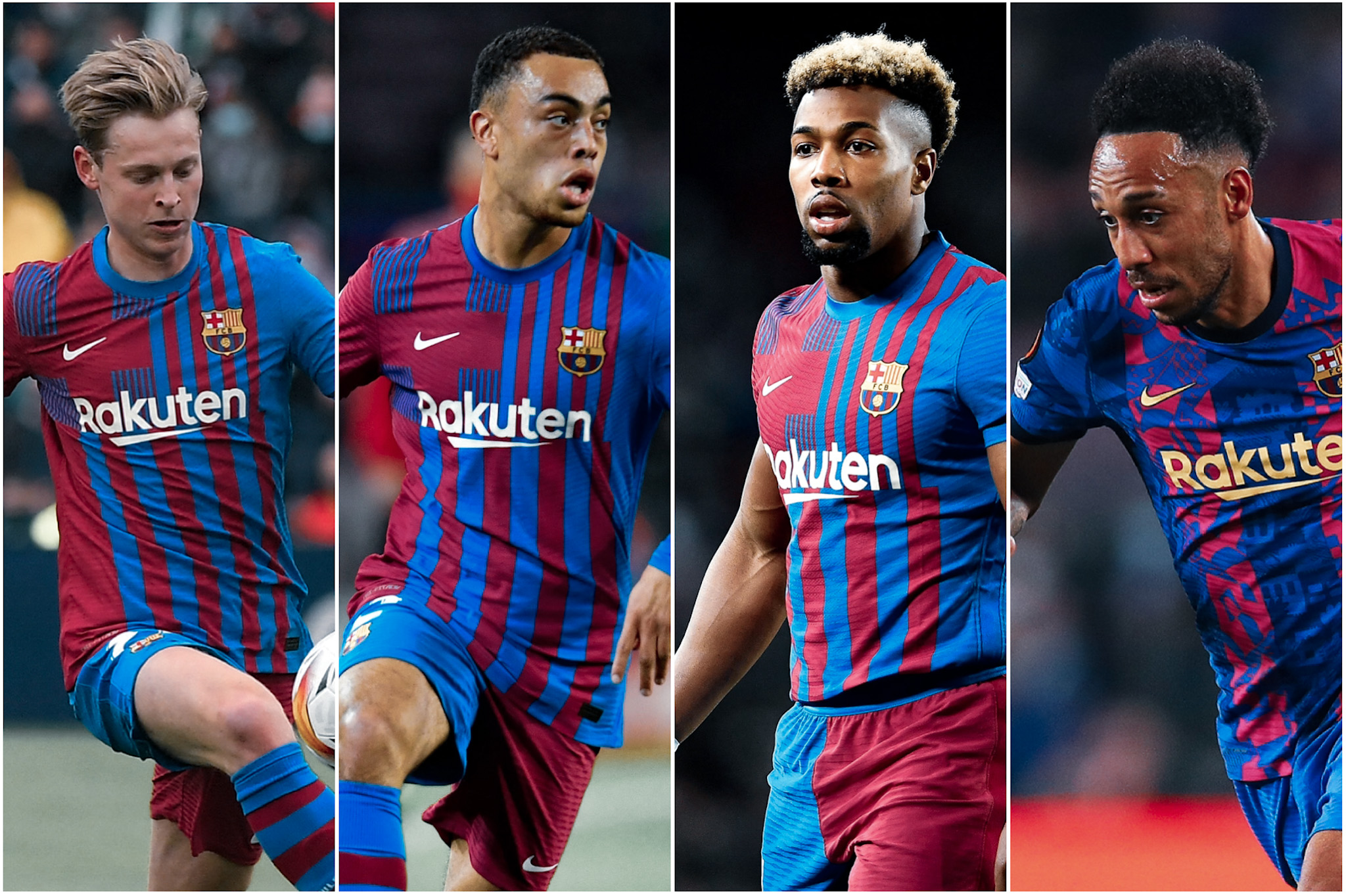 Narratives play a crucial role in the world of sports, for better or for worse. They are the stories we tell ourselves about our favourite athletes and players, encapsulating their performances, form, and off-the-field affairs. These narratives come and go; they are ever-changing, just as the lives of these players themselves are.

When the narrative surrounding a player turns sour, it can be difficult to overcome. Nevertheless, all it takes sometimes is a change of scenery and environment.

This is the situation a plethora of Barcelona players have found themselves in, particularly Frenkie de Jong, Sergino Dest, Adama Traore, and Pierre-Emerick Aubameyang.

The first two went from promising youngsters who stagnated, whereas the latter two were cast aside and disregarded entirely.

How have these players managed to change the stories we tell about them? For starters, a change in scenery (clubs) and environment (manager) have contributed greatly. But, plenty of things are going right, and that is worth a deeper dive. Let’s take a closer look at who is coming into their own and what has contributed to that.

Kicking things off is none other than Frenkie de Jong, the Dutchman who is starting to fly. De Jong’s first two seasons at Barcelona are well documented: his performances were relatively standard, and he was never a so-called “game changer”.

Although, there were signs of greatness last season during a short-lived run in January 2021, where he tallied five goal contributions in a month and excelled in a new role as a box-to-box midfielder.

Unfortunately, that came and went. The 24-year old also struggled to impress during Xavi’s first few months in charge. However, it feels like he has finally turned things around.

De Jong has embraced his new role in Barcelona’s midfield, one that serves as a wildcard for Xavi. The Dutchman is one of the most complete midfielders in the world, he has a wide-range passing ability, his ball carrying is elite, he has an intuitive sense of off-ball runs, and he is sufficient defensively. Without a doubt, Xavi is accentuating those traits.

Speaking on De Jong, Xavi recently said, “Frenkie is grasping a lot of tactical concepts that he did not understand before. He’s learning how to be the free man in the midfield. But he has a lot of qualities, like scoring goals too. He has everything.”

The Dutchman has thrived over the last few weeks, scoring twice, assisting once, and making a significant impact in the box. First, he performed admirably as a number 6 in the first leg against Napoli, showing poise and balance.

Next, against Valencia, he burst into the penalty area and converted Ousmane Dembele’s cross. Perhaps de Jong’s best performance in a Barça jersey this season, though, came against Napoli in the second leg.

In the 13th minute, he scored what could amount to the ‘Goal of the Season’, dribbling through the heart of the midfield and finessing a shot into the top right corner. Later in the match, his fake allowed Pierre-Emerick Aubameyang enough space to score. Furthermore, the midfielder tallied an assist against Athletic Club at the weekend.

In all, it’s essential to keep in mind that FdJ’s dazzling run of form is not based solely on whether or not he tallies goal contributions. Rather, he is a visible feature of Barcelona’s play who is essential in the buildup, generating chaos and is rewarded for late runs into the box.

One might ask – and it’s a fair question – how do we know this positive run of form can turn into something more permanent? Well, we don’t know for certain, but we can posit that because Xavi has (with the benefit of the doubt) distressed more tactical discipline than his predecessor, de Jong’s form should be a telling sign of things to come. It also helps that there is more rotation in the midfield with the emergence of Gavi and Nico.

Halfway through his second year with the Blaugrana, Dest’s future is still unclear. In fact, if anything, the last few months have signalled pessimism.

Despite this uncertainty and a spell of games on the bench, the American has played admirably and has possibly started winning Xavi over.

Dest has shown newfound levels of stability and composure in his recent performances. His offensive output remains at a high level. The 21-year old is a dazzling dribbler with the ball – one of the team’s best – and he has all the attacking traits of a winger, but from the right-back position.

He is completing 2.3 dribbles per game over his last three starts, according to FBRef, and providing sufficient support to forwards when necessary.

Nevertheless, it is his defensive work that has caught the eye of fans lately. The 21-year old is playing with a lot more poise and focus. He is no longer easily caught out of position and is seemingly shrugging off his lack of defensive fortitude.

On his day, Dest is precisely what Barcelona need from their right-back. Xavi seems to agree as well, stating, “Dest has been doing a great job lately, both offensively and defensively. The last game he tried to shoot as well. He is a very high-level footballer, he has the level to play at Barcelona.”

His last three starts have come in Barça’s huge wins against Valencia, Napoli, and Athletic.

In the first two, he started at right-back and had varying responsibilities, tasked with moving centrally to give Adama Traore or Ousmane Dembele space out wide, yet concurrently playing on the flanks too. Against Athletic, he played at left-back for the nth time this season and didn’t skip a beat.

If Dest keeps up this form, the right-back position can be his for years to come.

Another mention is Traore, one of Barcelona’s four new signings from the January transfer window. Upon signing him, many culés doubted his effectiveness.

Sure, he is one of the most prolific dribblers in world football, but how would he fit in a possession-oriented set-up in a league that is relatively slower-paced and less spaced than the Premier League?

Suffice to say, all detractors have been disproven. Traore went from an under-performer for Wolves to a key contributor for Barcelona.

Traore has hit the ground running, and his traits are being maximized to full effect. The Spaniard dominates opposition with his pace, power, and technical dribbling ability – his crosses into the box have been pinpoint, too.

Traore already has four assists after only six appearances, including two in the away leg at Napoli, and notably crossing a perfect ball to Luuk de Jong to secure a draw against Espanyol.

All signs point to his buy-clause being activated this summer, and there aren’t many who are not on board with that idea. The 26-year old has proven himself worthy of not only playing for the garnet and blue but starting. In fact, should Dembele depart for greener pastures, Traore can help alleviate that deduction.

Last but not least is Aubameyang, another player whose narrative has taken a 180 turn. The centre-forward was surplus to requirements at Arsenal – if not cast out – and was willing to take a significant pay-cut to facilitate the move. It was a gamble that has paid off with a grand jackpot.

Aubameyang is both a stable focal point and fluid option at centre-forward. He is a presence in the box that requires multiple markers, he can drift out-wide, and he has a rapport with Ousmane Dembele, not to mention developing chemistry with Ferran Torres.

Above all else, Auba has the goal-scoring instincts that Barcelona have desperately needed. The ex-Arsenal striker already has five goals in six appearances from an xG of only 1.17.

His red-hot form will be crucial in securing a top-four La Liga finish as well as making a deep run in the Europa League. Aubameyang is no longer seen as an Arsenal reject. He has plenty of gas left in the tank.

Each of the players listed in this piece – one could even add Luuk de Jong and Gerard Pique – have undergone narrative resurrections. Through their hard work, tireless effort, and Xavi’s tactical mastery, they are changing how the world sees them.

De Jong is making his talents felt all across the pitch, Dest is developing with more poise, Traore is electrifying a new league, and Aubameyang is spearheading the frontline of one of the world’s biggest clubs. Such a magnitude of resurgences are seldom seen in one team, and we are lucky to be witnessing it at Barcelona.