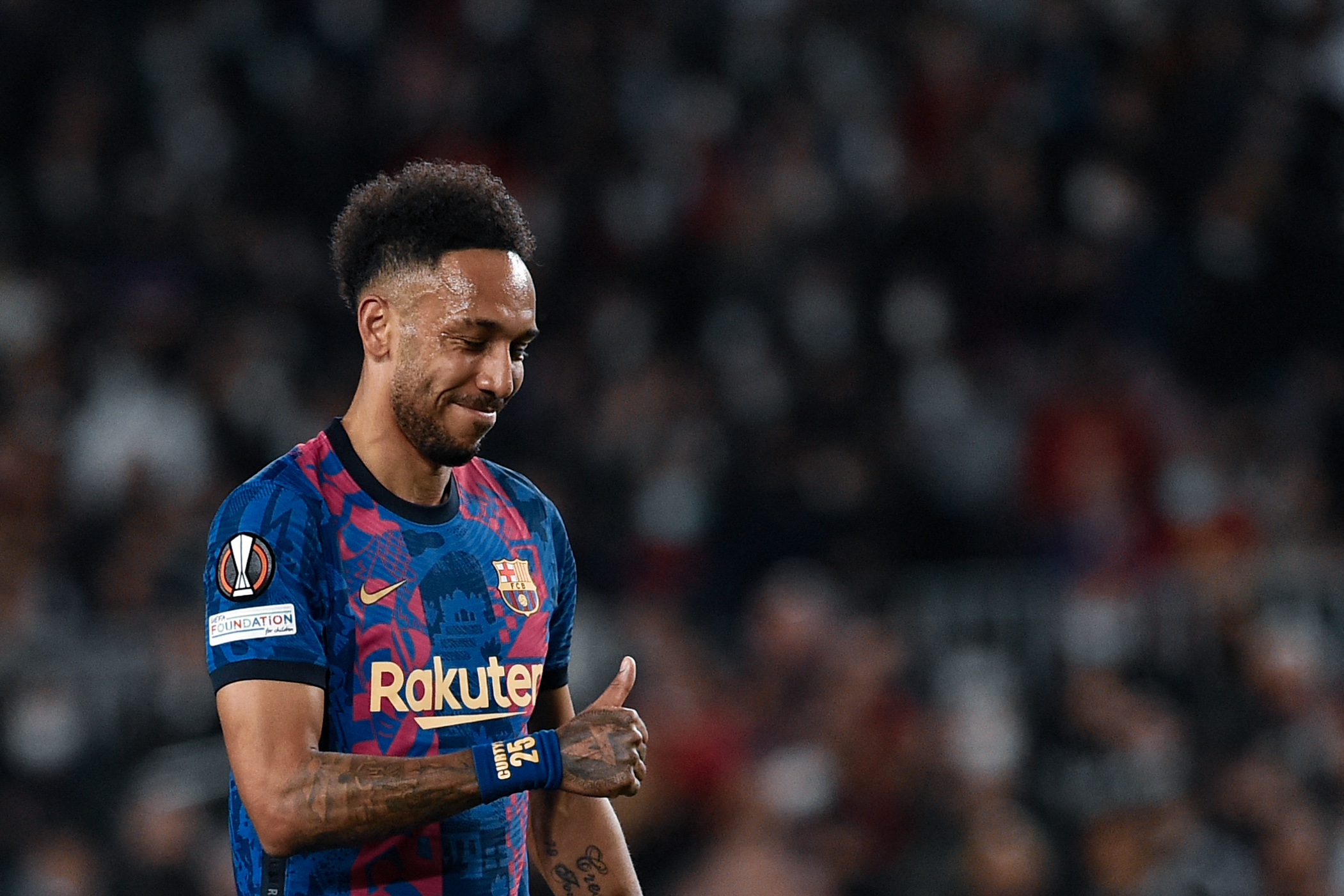 The presence of an out and out goalscorer in a football team is something that can not be understated. While the likes of Robert Lewandowski in the Bundesliga and Enes Unal in La Liga are belittled for their proficiency in solely slotting the ball in the back of the net, their absence from their respective teams would cause them colossal damage.

A pristine example of this would be Bayern Munich’s elimination at the hands of Paris Saint Germain last season, where the Pole’s absence damned them to a perhaps unmerited exit from the UEFA Champions League.

Barcelona have had to learn this lesson the hard way, but a lesson learnt late is better late than one never learned at all. In this article, join Barça Universal as we explore the sheer importance a striker has to the overall functioning of a team.

Change has been a long time in the making

The abject lack of finishers in recent years.

In the 2020/21 season, Barcelona had a crippling lack of options in the centre forward role. The Blaugrana could place their trust in only two people: Martin Braithwaite and Ansu Fati.

The former is far from the most dextrous individual from a purely technical standpoint, and the latter, while indubitably proficient in front of goal, struggled — and is still very much is struggling — with issues pertaining to fitness.

The result? Well, for the bulk of last season, the garnet and blue had to make do with players of somewhat similar profiles. These were Lionel Messi, Antoine Griezmann, Francisco Trincao, and Ousmane Dembele.

Were they productive in front of goal? Most certainly. Last season the quad accumulated 52 goals in La Liga.

All four players have one common problem: they all thrive with the ball within close proximity to their feet almost at all times. If one were to deploy them in a strictly striking role, their efficiency and overall productivity — and consequently that of the team as a whole — would diminish.

One need not look any further than the 1-1 draw against Paris Saint-Germain. Barcelona lacked the necessary firepower to finish off a cornucopia of chances that came their way.

Ousmane Dembele was the purported chief striker on the night, a position clearly foreign to him. His finishing on the night, or complete lack thereof, proved yet again that Barcelona were in desperate need of someone to put away the chances they created.

That someone, despite their best attempts with Martin Braithwaite, never came.

The same can be said for at least the first half of this season. Barcelona had Memphis Depay and Philippe Coutinho, who have some parallels with regards to their individual profiles.

Those who were meant to be putting away chances, take Ansu Fati, Sergio Aguero, Luuk de Jong and Martin Braithwaite, were all for one disparaging reason or another, completely absent from the team’s dynamics.

What this effectively left the manager — be it Ronald Koeman or Xavi Hernandez — was a conglomerate of players who each are heavily reliant on their detention of the ball over extended periods of time. The sole pure striker, the team, had was de Jong, who himself was criminally out of form before the return of Xavi to the team’s dynamics.

Neither the profile nor calibre of finisher the team needed was there to be seen.

The side effects on overall productivity

Given the concentration of footballers of that ball hogging profile, it should not come as much of a surprise that the squad’s productivity decreased. Barcelona were in dire need of finishers it never had, and this had multifaceted repercussions on the team.

Quite evidently, a team that cannot score — or at least not in ways proportionate to the chances they create — is a team doomed to drop points.

In the away match against Rayo Vallecano, the one which saw Ronald Koeman sacked from the club, Barça created 2.8 xG, while their hosts had only 0.8. The garnet and blue ran out 1-0 losers on a night where with the presence of an elite striker, they perhaps could have been winning by around 1-3.

In fact, in the 11 games that Barcelona played leading up to the Dutchman’s sacking, they created 20.2 xG, but could only score 16. The same form persisted for the two months that followed.

Barça have periodically been poor at finishing their chances, but by no means did they not create them sufficiently. The Catalans were industrious, but their hard work simply never bore fruit.

This was especially damaging to the team’s aspirations to make a solid fight for a top-four spot from early on in the season; as was the case the year before, in circumstances that almost perfectly paralleled the ones seen at the start of this one.

Barça’s own title challenge last campaign was prematurely halted as a result of the lack of performances from the team’s front line.

Another issue came in the fact that a team with such offensive impotence negatively impacted how secure the defence was.

Johan Cruyff once famously stated that attack is the best defence, and while many possible interpretations exist, it holds true that Barça’s incapacity to threaten their rivals meant that whatever puny mistakes were made in defence were severely aggravated by the team’s abject lack of goal threat.

What is perhaps a tad bit worse, is that while Xavi quickly recognised the easiest remedy — at least in the short term — to these issues was a more proficient attack, fans all across the globe slandered him for his thinking.

Cules wanted a defender to avoid conceding goals, rather than a finisher to put their own chances away. As such, the completely reasonable longing the Spaniard had for Alvaro Morata or the recently signed Pierre-Emerick Aubameyang was mistaken for insanity on his part.

Fortunately for the Barça manager, none of these claims of absurdity could blur his vision from seeing what he — correctly — perceived to be the truth. His acquisition of the Gabon international was a game-changer.

The impact of an out and out goalscorer

Results are finally coming through

The prime objective of a striker is to score; that much is evident to anyone who has watched a football match. For the more prolific among them, age is not that significant a hindrance to performance. After all, while mobility decreases, the developed instinct and technique remain.

This is why, despite Luis Suarez and David Villa both being well past their respective primes, they were useful in Atletico de Madrid’s title challenges. The Uruguayan last season scored a staggering 21 goals for Los Colchoneros en route to their 11th league triumph.

The past is more often than not an indicator of what is possible in the future. In this vein, Xavi’s interest in Aubameyang made perfect sense.

For years, Barcelona have been crudely incapable of putting the ball into the back of the net to the degrees that their creativity warranted. Whereas in those seasons, the Catalans would have high levels of tactical ingenuity be squandered by disparaging finishing, this time around the same is overcompensated for by outlandish finishing.

Aubameyang has four goals for the Catalan giants in La Liga in just four appearances, including a hat trick against Valencia. He has accumulated 2.03 xG, and doubled that tally in goals. His instinctive finishing, quick reflexes and sublime positioning have made for quite the start to life in the Garnet and Blue of Barcelona.

With his goals comes a sigh of collective relief for the Blaugrana. With the increased state of calmness, came better performances in front of goal and more enjoyable football as a whole.

The mere presence of a reliable goalscorer has drastically increased the confidence levels of the team, as they are cognisant that their crosses into the penalty area will no longer be squandered by lacklustre finishers.

There is a growing sense of belonging in the club at the moment from players and fans alike, with Barcelona winning a series of matches with heavy scorelines. Aubameyang’s reliability in front of the goal has been key to this happening. This is, of course, not the only advantage that his presence brings.

Raised ambitions in the Camp Nou

Barcelona have come to expect next to nothing given the shocking defeats and humiliations that the team begat over the past five years. More often than not, when the team has gained the slightest inkling of optimism, some often ludicrous and unexpected scenario plays out to effectively destroy all hope.

This was the case in the last two La Liga seasons, the current Champions League campaign, as well as the prematurely ended Copa del Rey journey.

An incapacity to finish off chances was a significant cause of these disparaging defeats, but now with Pierre-Emerick Aubameyang, perhaps the team can aspire for more than the bare minimum.

Domestically, Barcelona are on the ascendancy. The Catalan giants are currently fourth on the standings, despite being a woeful ninth by the time Ronald Koeman received his marching orders.

One of their biggest issues has been their insufficiency in front of goal, however as things stand, it is a problem that seems to be getting phased out with the presence of the Gabonese.

One more victory for the Blaugrana in the Spanish top flight will be enough for them to claim third spot on the league standings, leapfrogging Copa del Rey finalists, Real Betis.

Challenging for the league is perhaps far from rational — granted, it is still mathematically possible —, however, a Champions League finish will be enough of a triumph in the league this season.

In the Europa League, owing to the former Arsenal striker’s proficiency in front of goal, foreseeing a continental triumph is far from the least realistic of outcomes. He individually has sufficient experience in the tournament and is familiar enough with the level of opposition to make a difference for the team in the coming weeks and months.

Aubameyang’s primary role is to be a goalscorer, and as long as Xavi Hernandez uses him in ways that exploit his strengths while limiting his weaknesses, then Barcelona’s aspirations might just hit new heights come the end of the season.