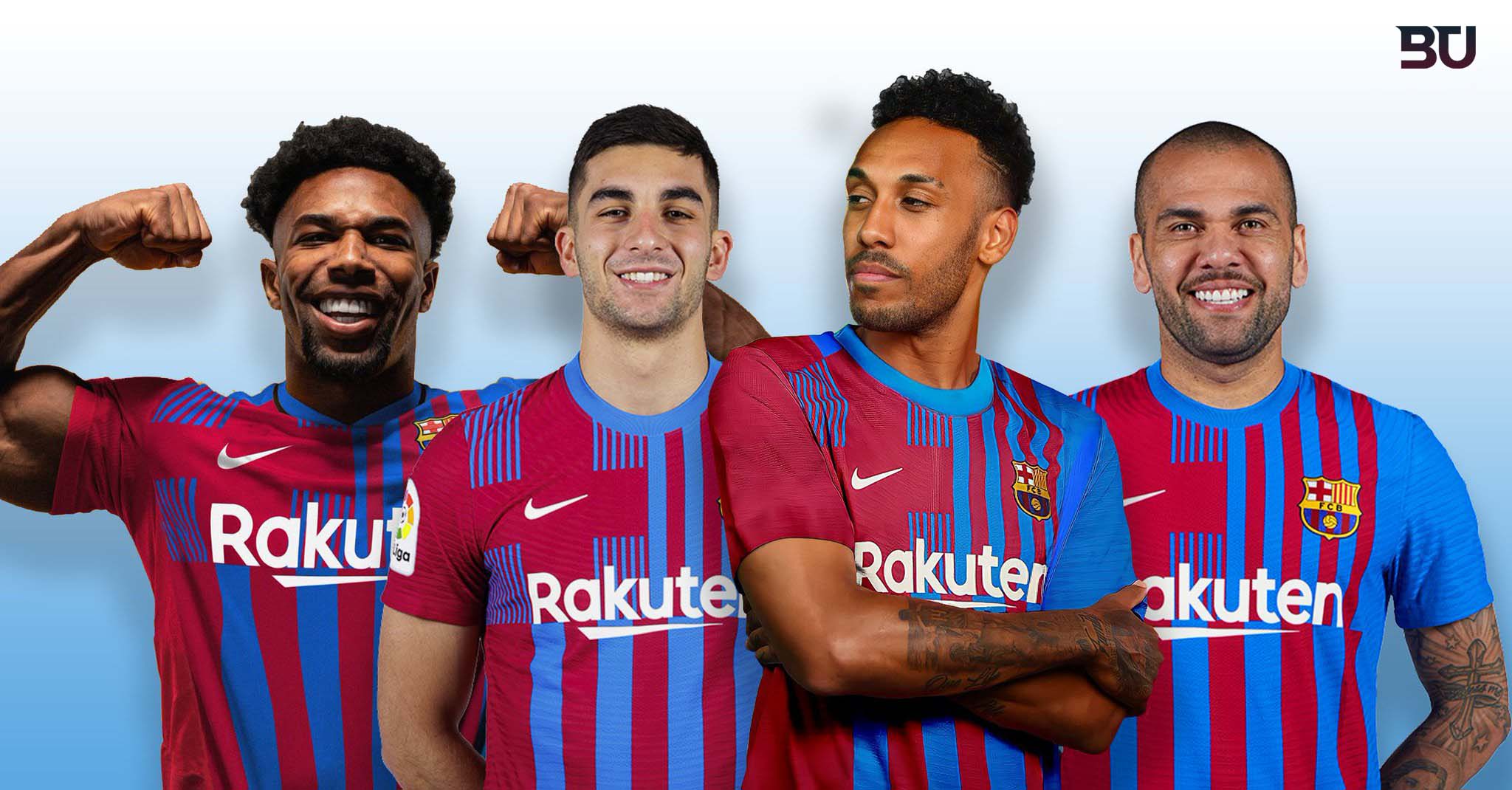 In a masterclass of negotiating, scouting, and overall market activity, Barcelona have had a transformational winter transfer window. Counting Dani Alves, who was officially signed in November (but could not play until January), the Catalans brought in four impact players. They also facilitated four departures.

Cules are not used to such quality and quantity being signed outside the summer, after all, the club only signed four players in the previous four transfer windows combined.

Rounding up all the club’s arrivals and departures, Barça Universal will rate each of the moves. We will take various factors into consideration, whether potential impact or finances. In the immortal words of Fabrizio Romano, here we go…

On a purely emotional return, there was barely a better feeling in the last few years than seeing Dani Alves return to Barcelona. He’s 38 years old, the most decorated footballer of all time; in his own words, “You cannot go wrong when you buy Alves.”

The Good Crazy brings much needed positive vibes to a Barcelona dressing room that has not been able to keep it together after multiple European humiliations.

From a purely footballing perspective, Alves is still an able crosser, which we have seen multiple times since his ‘second’ debut. While he can no longer overlap with pace, the 38-year-old is able to drop into midfield and create overload in half-spaces.

That said, he evidently cannot cope with the quicker wingers anymore. Vinicius Jr, Iker Muniain, and even Darwin Machis gave him trouble on the flank in the last few matches.

Should and probably will be an invaluable asset in the short-term, though.

Barcelona’s interest in Raheem Sterling did not last long as the focus quickly shifted to his teammate, Ferran Torres. His signing was wrapped up within a few days for €55 million excluding add-ons, which made it a huge point of debate in the fanbase.

Keeping the price tag aside, Torres’ signing was a much-needed one. He is a versatile forward who has trained under Pep Guardiola and does most of his damage off-the-ball. This was proven against Deportivo Alaves as his quick movement away from the opposition backline helped Barça score the winner in the last minute.

Adama Traore’s move to Tottenham Hotspur was edging closer when Barcelona swooped in to sign him on a loan move. While the signing has confused fans, there are a few apparent upsides to the move.

The Spaniard is an elite ball-carrier whose profile was a must after the Ousmane Dembele saga. He can take on defenders in 1v1 situations and crosses the ball with purpose from the touchline.

On the contrary, though, Traore lacks any real output. He has a grand total of one goal contribution this season, which came in 2022. It is also difficult for other attackers to match his speed and get on the end of his passes timely.

If Xavi can bring the best out of the 26-year-old, though, he can be a precious asset, especially given his ability to play in deeper positions as well.

Deadline day caused up a storm for Barcelona as they were fighting tooth and nail to complete the signing of Pierre-Emerick Aubameyang from Arsenal. The transfer eventually went through with less than two minutes to spare, with the Gunners officially terminating the Gabonese’s contract at 23:58 CET.

The obvious benefit of this signing is qualitative depth at the centre-forward position. Martin Braithwaite, Luuk de Jong, Ferran Jutgla, and others have all tried and been rather hit-and-miss so far.

Not only will others, and hopefully Aubameyang, benefit from competition, it will create rotation options for Xavi.

Further, the former Arsenal man has reduced his salary massively, which helps to accommodate him into the wage bill.

Auba will be very helpful in the Europa League, especially where the top clubs like Napoli, Atalanta, RB Leipzig, etc., leave a lot of space behind their defence.

Philippe Coutinho’s steep salary was always going to be a massive hurdle to overcome, as teams would not willingly match that value.

But, likely seeing no increase in playing time down the road, Coutinho generously agreed to lower his wages in order to move to Villa. The 29-year old will spend the next six months on loan, with a potential option to buy north of €30 million.

For all parties involved, this move is a blessing. For Coutinho, he is back in England, where he spent the best part of his career. Under the tutelage of a promising manager in Steven Gerrard, there’s genuine hope he can regain form and put his career back on the right track.

For Barcelona, they are saving money on the wage bill, and this move also helped register Ferran Torres, who has had an immediate positive impact.

Exactly four years after he arrived in January 2018, Coutinho’s stint in Barcelona may be over.

Barca B goalkeeper Inaki Pena was touted by many to be Neto’s replacement. He has consistently put in solid performances for the youth team and could be a solid backup. Still, the 22-year old is yet to make a single appearance for the senior side.

There was hope that Neto would be offloaded in the winter transfer window, or at least Pena could play in the early rounds of the Copa del Rey, but neither came to fruition.

Now, Pena will spend the rest of the season on loan with the Turkish club Galatasaray. Long-time starter Fernando Muslera is set to miss around 8-10 weeks with a knee injury, and that could mean plenty of minutes for Pena.

Overall, this exit is a positive one for both the player and club. Hopefully, Pena can gain valuable first-team experience in one of Europe’s most competitive leagues.

After infuriatingly not being registered in the squad last summer, former Barça B captain Alex Collado spent four months on the sidelines. Fortunately, he was sent on a six-month loan to Granada in January and has already made three appearances for the La Liga side.

In all, the move does not have much of an impact from Barcelona’s perspective, as Collado’s salary did not take up much of the wage bill, nor were his services needed with the arrivals of Ferran Torres, Pierre-Emerick Aubameyang, and Adama Traore.

From the 21-year-old’s point of view, though, getting first-team action with Granada will be crucial in his development, and a successful spell could indicate whether he stays long-term with the Blaugrana.

There were high hopes when Barcelona brought Yusuf Demir in on loan last summer. The wonderkid had already lit up the Austrian league with Rapid Wien, and the potential €10 million purchase clause was extremely economical.

Nevertheless, after playing only 294 minutes this campaign — the equivalent of a little over three full matches — before his loan was terminated and he has returned to Austria.

Demir failed to make the most out of his few opportunities, and his profile as a hybrid winger and number 10 is not what the Catalans need right now. Like the Collado deal, this move will likely have minimal impact on the rest of the season. For Demir, his move to a bigger European club is surely still down the road.

Without a doubt, Barcelona’s winter transfer window went smoother than anyone could have imagined. Yes, the club missed out on potentially signing a left-back, but the squad has still been revamped with impact players who can fit into a variety of tactical setups.

It looks like Xavi will have enough tools to finish in the top 4 and make a deep run in the Europa League. One can only imagine what the summer has in store.