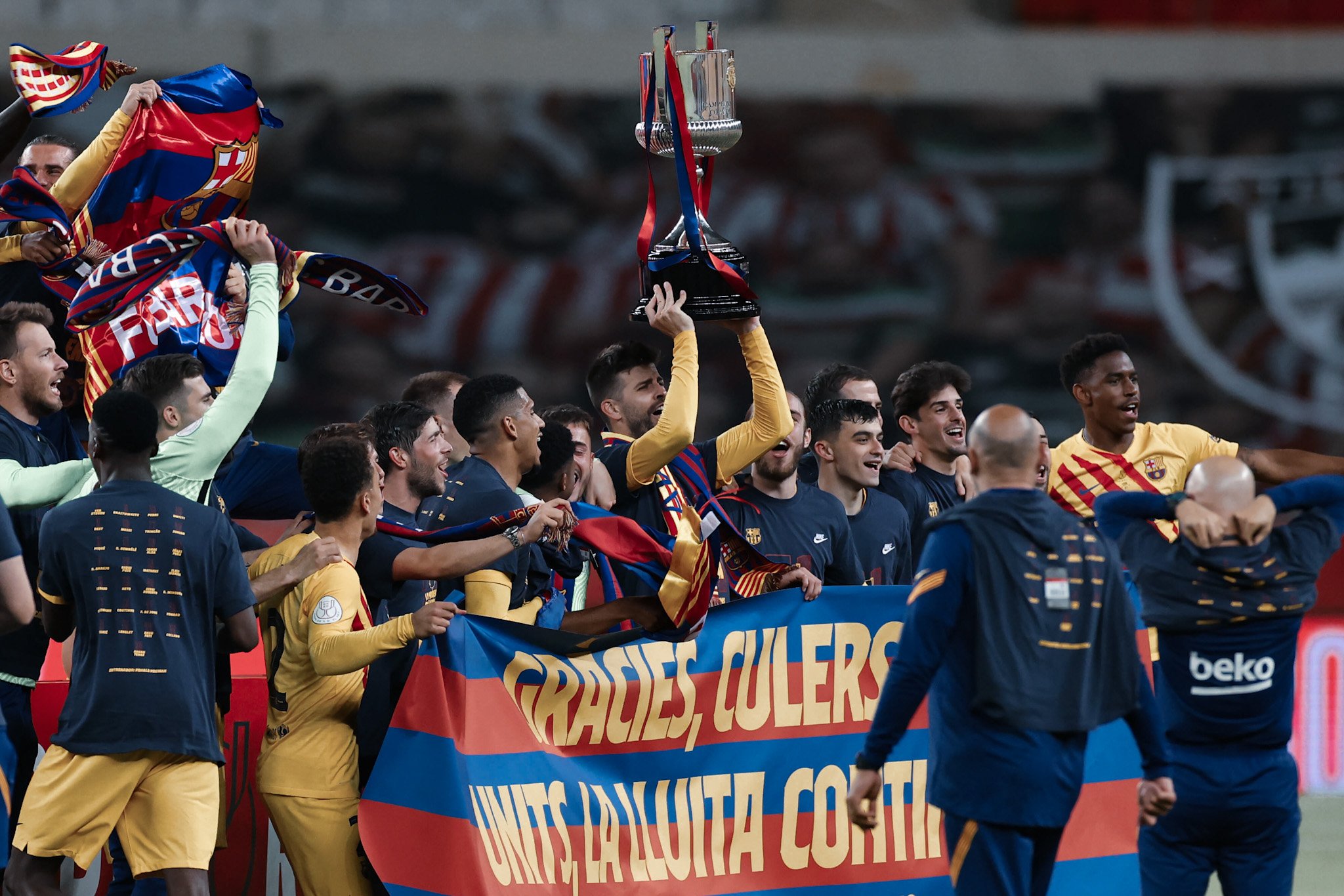 At long last, Barcelona are champions. A whopping 700+ days without a trophy has finally come to an end, as a quite phenomenal team effort ensured that Barcelona emerged victorious against Athletic Club by four goals to nil.

The match served not only as vindication for past failures but as a source of hope for the next eight La Liga matches. It was as perfect a second-half performance from the Garnet and Blue as they come, as a Lionel Messi brace supplanted Antoine Griezmann and Frenkie de Jong’s opening goals to cruise past Los Leones.

These are Barça Universal’s takeaways from the game in Andalusia.

1. Mentality once again steps up

Following a quite damning defeat to Real Madrid in the Clásico, hopes were at an all-time low heading into the clash against Athletic Club. Many expected the Basque side to record their second title win of the season, not necessarily out of their own superiority, but due to worries over Barcelona’s incapacity to overcome that defeat.

The first half saw the Catalans dominate all stats, all but the most important one, of course, the scoreline. Rather than cower in fear in the second period, making innumerable shots from outside the box in search of luck, the Garnet and Blue kept their composure and trusted their principles.

The champions took the bull by the horns, taking full control of possession and leaving the rest to their captain Lionel Messi and Frenkie de Jong. Barça were ruthless. They lacerated the Bilbao defence like a hot knife through butter, making multifarious combinations and through balls to annihilate their opposition.

This was a stark contrast from the side which succumbed to defeat against the same side back in January, one which befell a mighty collapse in the final minute of the match. This is what champions are made of.

2. Lenglet continues on his path to redemption

Once largely criticised by a majority of the Barcelona fanbase, Clément Lenglet has made a phenomenal return to form. For him, this has been quite the turnaround, and quite the redemption arc if you may.

His insane composure on the ball was up for a show in the Andalusian capital, as neither Dani nor Raúl García could perturb him for the entirety of the encounter. Entrusted with making the link between defence and attack, the Frenchman had a marvellous show of equanimity in the face of pressure.

His stats on the night were absolutely perfect. A 95% passing accuracy, 90% success in long balls, 6 aerial duels won, and 47 passes into the opposition half. His newfound growth has been a sight for sore eyes, and in a campaign where the mentality was put to the test for the entirety of the tournament, him getting a taste of silverware is the perfect end to the perfect championship run.

3. Messi and Koeman finally have their day in the sun

The Clásico defeat had hoards of people making all sorts of disparaging comments against Lionel Messi and Ronald Koeman. The Argentine failed to turn up for the game against Real Madrid, and his manager had to endure a painfully strenuous first half, one quickly followed up by a vicious questioning of his tactics come the full-time whistle. Last night, both proved their doubters absolutely wrong.

The 6-time Ballon D’or winner was an architect from behind, proving ever so decisive in his creation of chances and positioning to score his brace. The captain led his ship to his individual seventh, and Barcelona’s 31st Copa Del Rey title. Should this be his last rodeo, then at least it ended in a smile, and with silverware to boot.

Rather than make a complete switch in tactics following the defeat to Real Madrid, Koeman showed conviction in his tactics, and like a true manager, he corrected what was wrong against Los Merengues and used that to forge his success here.

Sergiño Dest as almost a winger, Antoine Griezmann in place of Ousmane Dembélé as a false 9, building up with a back 2… all of it was sensational, and he deserves full credit for it.

It has been an excruciatingly tough season for both, and this is shaping up to be quite an end for both Koeman and Messi.