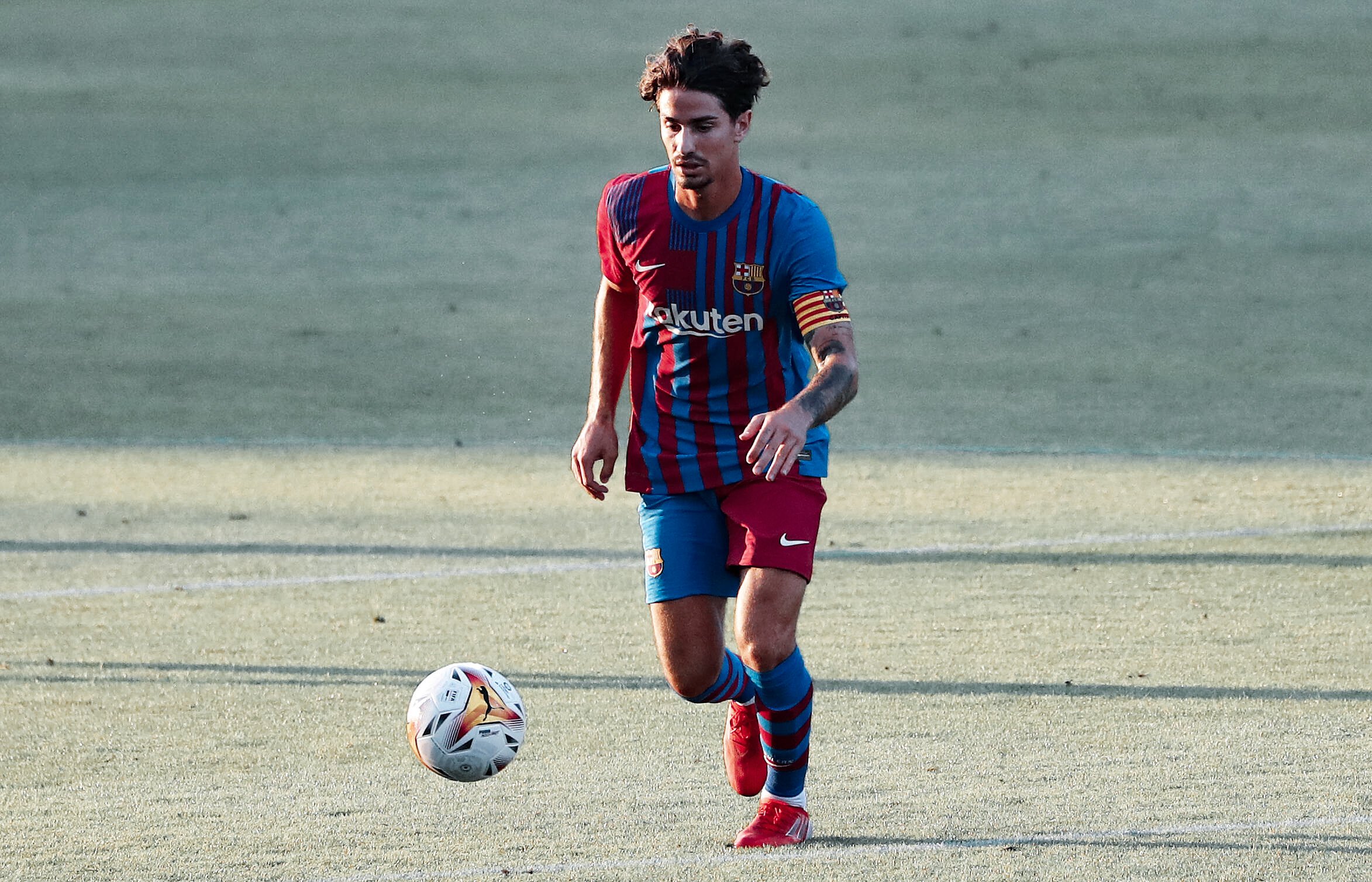 “I’m going to work hard to have minutes in the first team. I will not return to Barça B. The intention is to continue working and stay at Barça,” said Alex Collado. Reiterating the fact that he is here to fight for a first-team spot, underneath the floppy hair, his eyes carried the same message as the one he vocalized.

Collado, born and brought up in Catalonia, wasn’t going to leave home. He had the first-team spot in his crosshairs, and he was without a doubt ready to take the shot.  The determination within him is clearer now than ever before. Only this time, it is being broadcast to the people at the very top of FC Barcelona.

For Alex Collado, a seat at the table of the club he grew up supporting and playing for is where he would love to be the most. His willingness to join the main squad is clear. But will the first team benefit by playing him?

The apparatus and assumptions

To properly consider Collado’s possible influence on the team, we need to decide the conditions under which we shall examine the same. There will be differences, subtle or significant, depending on the various systems and players he plays in. Alex Collado can play as an attacking midfielder, a winger, or as an interior midfielder.

The right-wing spot at Barcelona can be ruled out for obvious reasons, at least on paper. In a 4-2-3-1, a spot exists for an attacking midfielder. However, we shall examine a 4-3-3 as it is the way to move forward for a team like Barcelona.

Barcelona’s interiors for the foreseeable future can be assumed to be Frenkie de Jong and Pedri Gonzalez. Collado starting over these two is highly unlikely. When he is played, we can expect him to start as a right interior-midfielder in the absence of the former two. For vertical attacking play, a left-footed midfielder does much better as the right interior.

Lionel Messi would occupy the right-wing spot, with Sergino Dest, Emerson Royal, or Sergi Roberto as the right-backs and Sergio Busquets as the single pivot. Granted, almost any player being changed on the pitch will alter the way Collado would be interacting with the system. But to contain the number of unknowns, we are taking into account the players that Collado would interact the most with.

At the heart of this club with a valuation of a few billion, a fanbase in tens of millions in Europe alone, and a history of more than 100 years is a 34-year-old Argentine. The fact that maximizing the influence of the best player of all time on the field is his teammates’ duty is granted. This is the first and possibly most impactful way in which Alex Collado can help the team.

Lionel Messi has a free role in Barcelona’s system. The image below represents Messi’s heatmap in La Liga 2020/21. As we can see, he operates across the field in the final third. At times, we’ve observed him even occupying the left half-spaces. This free role compromises the team’s structural integrity.

For example, if Messi is drifting towards the left, it means the right interior will have to stay back, and the right-back will have to advance further in order to suffocate a counter before it starts. This can cause many issues in the attack. One is that the full-back must stay high up the field in order to compensate for the lack of width. Even if he does, the opposition can shift zonally towards the other flank without worrying much about the full-back, as even a quick switch of play offers time to generate a 1v1 or 2v1 against the full-back.

This is where Alex Collado’s player profile comes into play. When Messi drifts inwards, Collado could shift from the right-interior spot to the right-wing spot. A small tweak can have multiple effects.

As someone who can play in both positions, there would be no issue of adaptability. Thanks to his dribbling and quick feet, he would be able to operate in tight spaces if needed and even take the opposition head-on.

With his position as an auxiliary right-winger in mind, one of the biggest advantages the team would have is the creation of triangles which helps positional play. His ability to do this was evident when Barça took on Girona.

In the usual system without Collado, this was an issue seen often. Dest would be high and wide up the pitch, the right interior would occupy the right channel. The centre-forward or the right-winger, who would usually assist in forming triangles, would occupy positions at an unsuitable passing distance regularly.

With an auxiliary right-winger, there would be a gap where the right-interior was previously situated. But considering this is the attacking phase, the single pivot could be situated closer to the right channel. Since Collado can now drift inwards as Dest maintains the width, though not as high up the field as earlier, it presents even more options.

Alex Collado has always been one to take matters into his own hands. In the UEFA Youth League, this was prominent as his excellent set-piece ability would regularly bail the team out when in trouble. At the Segunda level, this was complemented by explosive 1v1 dribbling, piercing passes, and a knack for curling the ball into the goal. Translating that to the first team level has gotten off to a solid start with a goal against Gimnastic.

Collado does not have an especially low centre-of-gravity as expected by his height of 177cm. Despite this, he is hard to push off the ball. His shielding of the ball and intricate control means that even if he attempts a 1v1 and is tackled, more often than nought will manage to draw a foul or keep possession against stronger opponents.

The set-piece duties in the first-team are already fixed, and Collado would not be able to showcase his freekick talents anytime soon. Most corners are taken short by Ronald Koeman’s Barcelona and a majority of previous Barcelona sides as well. However, this set-piece ability is indicative of other technical qualities. Namely, shooting and passing.

Collado’s shooting ability is quite impressive. From the edge of the box in the right channel, he will almost always force a save from the goalkeeper. This is something that Barcelona’s current midfield lacks. In fact, this is something that Barcelona lack as a whole. Antoine Griezmann does more than his bit in the buildup and off-the-ball movement. But he fails to test the goalkeeper often.

In terms of passing, the 22-year-old is clearly trained at La Masia. He will rarely misplace a pass, can combine well in one-two touches, and won’t hesitate to play risky passes.

He boasts an impressive passing range as well. This is, of course, expected from a Barcelona midfielder. As the Sabadell-born midfielder operates in attacking areas most often, he also needs to always know where the spaces are and how to exploit them. Throughout his career, he has shown an inherent talent to do these things that separate good midfielders from great ones. The challenge, however, starts now at the first-team level.

A change of hunting grounds

Alex Collado was clearly much better than anyone on the pitch whenever he played for Barca B. The opposition knew this, and they would do their best to stop him. Of course, they rarely could.

The challenge of translating the same quality to the first-team level is of great importance and difficulty. However, at the risk of sounding too optimistic, Alex Collado’s case could be a very successful one. Not only does he have the quality to perform for the main team, but he also has what the team lacks.