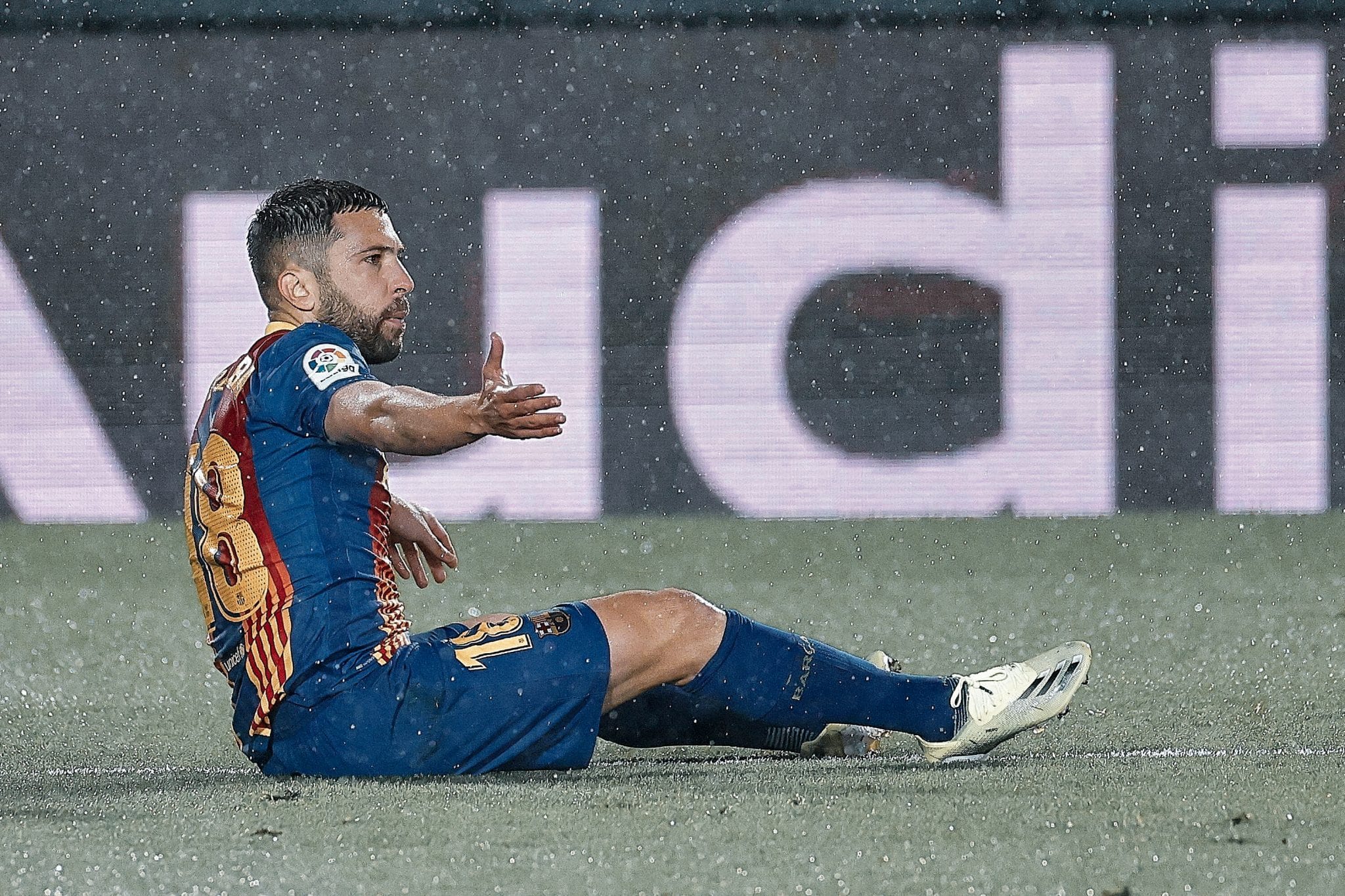 Claiming Jordi Alba to be one of La Liga’s – if not Europe’s – most improved players from last season would not be a far fetch. While on his best days, his quality has always been evident, and his raiding runs on the left flank tend to give the Blaugranas a huge edge, the Spanish international’s output in the final third has lately begun to revolve around sensible plays, with visible improvements in Alba’s decision making; most notably refraining from relying on the formularized ‘Messi cut-back.’

The marauding speedster has become a crucial cog in Koeman’s side as the newfound 3-5-2/3-4-3 formation arguably seems to extract his best qualities and conceals his most noticeable flaws. The Spaniard is considered lethal, and a vital source of penetration situated higher up the field. With slick spells of possession in the centre, his runs from wide are almost gone unnoticed.

However, in spite of Alba’s achievements thus far and enhancements in his gameplay, issues that have tainted the talented Spaniard’s career still prove to be a thorn in his side, overcoming him in arguably the worst moments. Big games and Jordi Alba appear to have developed an incredibly toxic relationship as the 32-year-old has, on countless occasions, been a victim of his feeble mindset, tarnishing his legacy in the process.

The Copa del Rey final will once more be a huge encounter with a crucial source of silverware on the line for the Blaugranas. A win will undoubtedly elevate their status, uplift the morale of the team and surely prove to be their saving grace this season. Unfortunately, a game of this magnitude is also the perfect breeding ground for Alba’s antics. As promising as his season may have been, he has still proven to be unreliable in pressure situations.

Blitzing forward, he is known to be a menace, but in the defensive third, poor decision making is often visible. In the recent Clásico, Alba’s assist for Mingueza may have overshadowed his lack of focus defensively, but it must not be forgotten that he was a major reason why Fede Valverde was able to comfortably cruise past the Barcelona midfield and provide Benzema with the pre-assist. After enjoying one of the best patches of his career, Alba fell prey to the big game syndrome on the night it mattered most.

While that defeat was not entirely the number 18’s fault, it was a testament to his habitual blunders. In the Spanish Supercup final against Athletic Bilbao, Alba was once again one of the major culprits, proving to be undependable in set pieces and as confused as a lost sailor in defence, suffering at the hands of Iñaki Williams most notably. Scoring an own goal against the very same opposition in the league was another dent on his resumé. The fact that Alba contributed heavily to Valencia’s Copa Del Rey victory in the 18/19 season also devalues his presence in critical games, with both goals from Valencia easily avoidable, had the Spaniard not fumbled cheaply.

For the first goal, Alba came instantly rushing to block the scorer but was sent to the cleaners as he gravely mistimed his run. On the second occasion, the 32-year-old enabled Valencia’s winger to charge past him seamlessly as he went onto assist the final dagger. Admittedly, Culés have done their best to move on from the past in an attempt to forget and forgive. Having made some huge strides this campaign, clinging on to errors that any mere mortal is capable of committing does seem nonsensical.

Even so, despite efforts made to channel more faith in Alba, his recent comments have only made matters worse. As a leaked conversation between Alba and Piqué was made public by the media after the Clásico, concerns are again beginning to mount over his mentality. Even though Piqué appeared to be optimistic regarding Barça’s chances in the Copa Del Rey, all Alba had to offer in response was, “I don’t know.”

Completely ignoring the progression Barcelona made after proceedings, disregarding the fact that a point is the least Barça deserved, and most importantly, forgetting the club’s ability to bounce back this season, a meagre “I don’t know” is all the full-back gave in response. Of course, drawing conclusions based solely on a 10-second clip would be unjust, yet, given Alba’s past of wavering when it matters most, it really does not come as a surprise. The Anfield annihilation still remains fresh in memory, a wound that is yet to heal fully.

To play or not play, that is the question

As the full-back made a mockery of himself under the lights, his breakdown at half-time when the comeback was not even completed simply implies his pessimistic nature. Thus arrives the million-dollar question: do Barcelona run the risk of playing Alba in a game where the stakes are this high?

Considering Alba’s recent comments and reputation in knockout stages, fielding him in a game that holds such value for Barça’s campaign is inarguably a risk. The brand of football Barcelona have been playing comprises of collective strength, which emphasizes on every individual playing a vital role. One loose screw is all it takes to disrupt the team, and it’s fair to say Alba has proven to be that loose screw on several occasions before.

Nonetheless, the Blaugranas are incredibly limited, not yet possessing the privilege to have any firm competition in Alba’s position. As frustrating as his shortcomings may be, there is still no denying that his “good days” earn him the title of one of the best full-backs in the world. An additional factor is that he has, at the very least, not crumbled in any of the previous Copa del Rey knockout stages. Against Granada and Sevilla, his contributions were absolutely vital, particularly his performance against the Nazaríes, where a blistering brace enabled his side to seal qualification.

Barça are certainly running a risk, but this risk could potentially pay dividends if Alba shows a more daring and composed version. Making a sudden change in the final seems unlikely and could potentially hamper the team’s harmony.