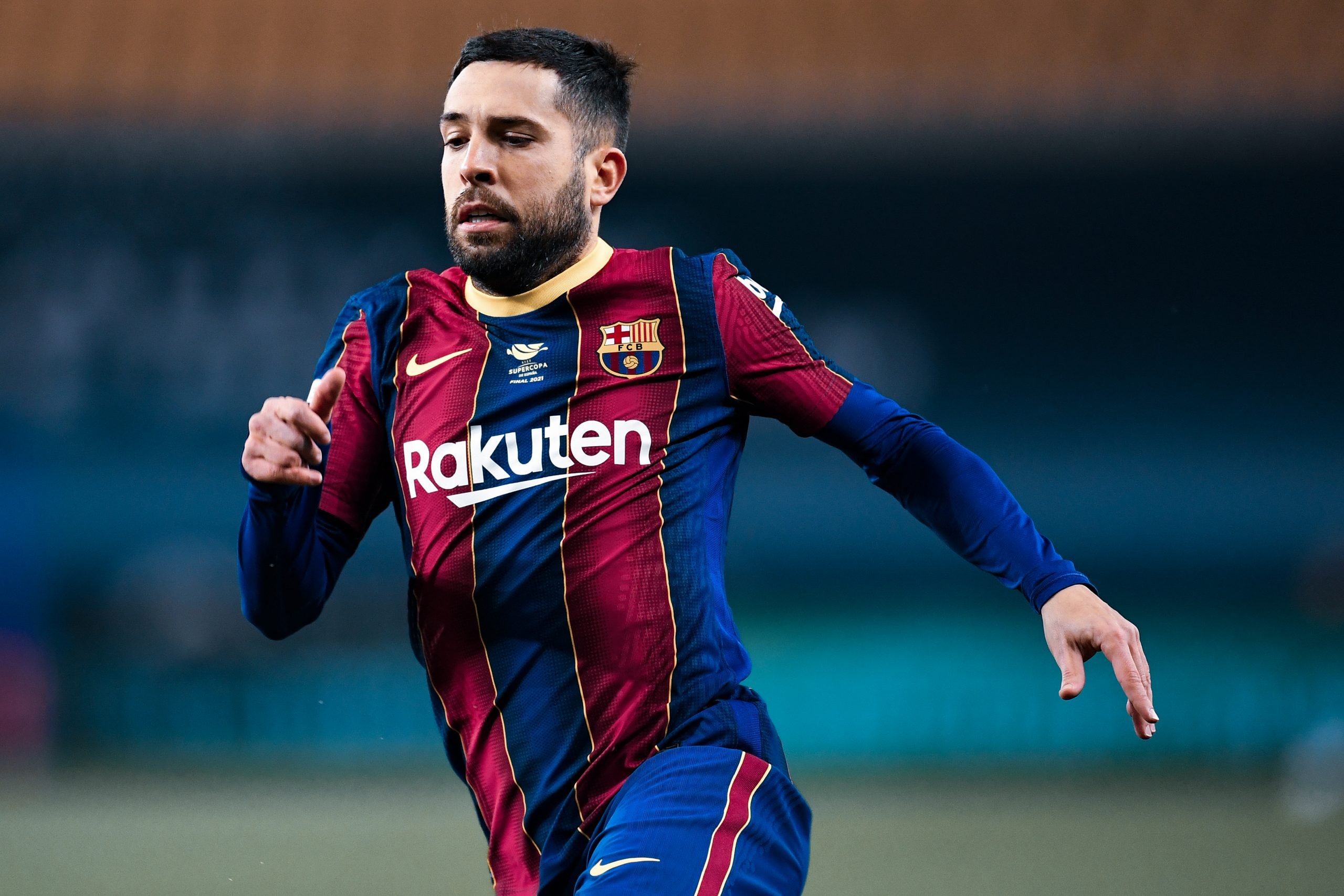 Jordi Alba at Barcelona has been a curious case to study of late. The 31-year-old has been one of the key figures in the club’s recent history. And for quite a while, he has been an immovable name at left-back on the Barcelona team sheet. After over eight years and 359 appearances for Barça, there is a sense that his impact is dwindling. And noticeably so.

The diminutive fullback can proudly boast of a wonderful career with the Azulgranas. He started among the youth ranks at Barcelona, but in 2005 the club released him for being of minuscule built. He would then move to Cornella and eventually Valencia, where he broke into the first team in 2009. Alba made a name for himself with Los Che, prompting Barcelona to sign him back in 2012.

Over the years, Alba became an instrumental part of Barcelona’s system. The Spaniard provided constant support by bombing up and down the left flank. His relentless energy and speed made him a precious asset. Staples of his game are the trademark overlapping runs and his cutbacks to players arriving late in the box through the middle.

Over the past few years, most prominently his telepathic connection to Lionel Messi has shone through. In Jordi Alba’s time at Barcelona, he has notched 18 goals and 74 assists for the club. Great numbers for a fullback indeed.

Alba has had his ups, but of late there have been plenty of downs. Amid all the turmoil surrounding the club in recent times, El Ferrari has divided a lot of opinions.

Barcelona have not made matters easy for themselves in the last few years. Three years in a row, the Blaugrana have suffered three utterly humiliating exits from the Champions League. The 3-0 defeat to Roma, the infamous collapse at Anfield and the demolition at the hands of Bayern Munich last season— all becoming a culmination of Barcelona’s steady decline over the past decade.

While there are plenty of institutional causes for the Catalans’ fall from grace, from a sporting perspective, things seem fairly straightforward. An aura of complacency has set into the players’ minds. Especially some players whose position in the team has been unchallenged for a long time. Unfortunately, Jordi Alba is one of those players.

Granted that since joining Barcelona, Alba has had a fair share of success. When he retires, he will have the pleasure of looking back on an illustrious, trophy-laden career. But Alba has had little to no competition for his left-back spot. Nobody to rival him to be named in the teamsheet. Nobody to drive him beyond his limits. And of course, this is not Jordi Alba’s fault alone. Years of mismanagement and chaos have brought the club to the precarious position they find themselves in today.

The 2019-20 season, perhaps one of the most painful campaigns in Barça’s recent history. On the cusp of an unprecedented third treble, the Blaugrana outfit’s season ended in heartbreak. After securing their 26th La Liga title, Barcelona went into May with optimism aplenty. A 3-0 lead against Liverpool heading into the second leg of the Champions League semifinal, and a Copa Del Rey final approaching later the same month. They looked set to rewrite history once again. Alas, fate had other plans.

A shambolic night at Anfield, where Barça threw their lead away and lost 4-0, followed by a 2-1 loss to Valencia in the Copa Del Rey final. Like a lollipop from a child’s mouth, the glory was snatched away from the Catalans. Later it was also revealed that Jordi Alba broke down into tears during halftime at Anfield. What was left behind after, was the hollow husk of a team with their dreams shattered.

Following the Copa Del Rey final loss, Jordi Alba, while speaking to Marca, made some rather brazen comments aimed at the Barcelona fans.

“For better or for worse, we have spoiled people by winning so many titles, and it’s really hard to win. Taking out these two games [at Anfield and the Copa del Rey final] it is the best season of my career on a personal level, but like all humans I make mistakes, and I do not have to be ashamed of this.”

This is not the first time the 31-year-old has taken sly digs via the media either. Back in 2017, Alba also mentioned how Neymar’s departure allowed him more freedom in games. He was under heavy criticism for his lack of output and yet, even after Neymar’s controversial move to PSG, his form remained largely faltering.

A trend of errors

When one observes many of Barcelona’s recent shortcomings, individual errors on the pitch have a big part to play. And sadly, Jordi Alba has displayed a trend of being involved in those errors. Of course, this isn’t to imply that Alba is to be blamed for the team’s collective failures. But he is the player in question.

Granted, that the 2018-19 season was largely great for Alba on a personal level. He racked up 3 goals and 17 assists in 54 games. His assists to Messi quite often making him a hero, covering up so for his fallacies every now and then. However, his stark words paint a rather cocky and disrespectful picture.

At Anfield, Alba was directly at fault for Liverpool’s first two goals. Against Roma, he played Edin Dzeko onside leading to a goal as well. In the Copa Del Rey final against his former club, he left Carlos Soler in space, allowing the winger to cross for Rodrigo to score.

These are all recent incidents, however. Even back in 2013, during Bayern Munich’s 7-0 aggregate thrashing of Barcelona, Arjen Robben gave Alba the runaround. Considering all these cases, especially in the 2018-19 season, where Alba’s errors potentially cost Barcelona major trophies, he took the chance to attack critics, doing little to atone for his errors personally.

Today once again, we find him under immense scrutiny due to his dreadful showing in the Supercopa final against Athletic Club. Another individual error, leading to another vital goal conceded, resulting in another title slipping from Barça’s hands. And Alba’s words echo around, leaving everyone wondering, at what point is it time to move on?

What next for Jordi Alba at Barcelona?

An element of this decline is down to FC Barcelona’s dreadful squad planning over the past few years. Promising La Masia left-backs like Marc Cucurella and Juan Miranda have either been transferred out or sent on loan. Miranda is on loan at Betis, but the likelihood of him getting game time seems increasingly slim.

Barcelona have made no attempt to rectify their left-back woes, meaning a fast-ageing and declining Jordi Alba is still the only option. Junior Firpo seems like the most sensible backup signing in recent times. However, the 24-year-old has failed to make a mark so far. Part of that is also due to the changing systems at the club. He has already seen three coaches since he arrived in August 2019. None of them have afforded him a set role in the team and minutes to try and hone himself.

Now even Firpo seems like he will be on his way out soon. Barça cannot sell him right now due to the presidential election fiasco, but come summer, the Spanish-Dominican may well be departing to one of the many clubs linked to him. Once again, leaving all the responsibility on Jordi Alba’s shoulders. And now there are increasing doubts about whether he is still up to the task.

Barcelona must now be sensible in the summer. A fullback is one of the most integral positions in Barcelona’s philosophies, and they must aim to rectify that situation quickly. A left-back who can compete with Alba for a starting spot every week will be vital. Jose Gaya of Valencia has been linked to the club, but it seems unlikely that Barça will go after his signature.

This is a problem that should have been rectified a lot sooner. But now it is time to think long term. Jordi Alba’s time at Barcelona is not completely over, but his time as an undisputed starter should be.