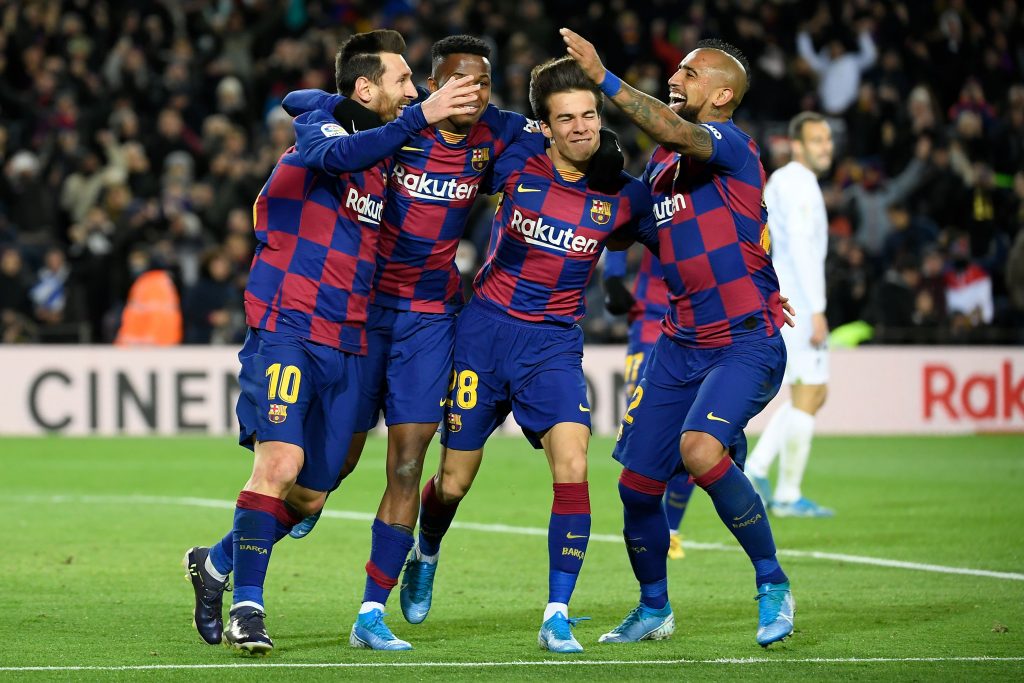 Although Barcelona got a tight win, Quique Setién’s debut left good sensations. The azulgranas were dominant, but they lacked to conclude the plays. 5 takeaways from the Barcelona 1-0 Granada.

Quique Setién has been in the club since last week. For his debut as a culé coach he had many obstacles. Arthur’s injury, De Jong’s suspension, added to the other injured players in the locker room: Suárez and Dembélé. A challenging situation that wasn’t an obstacle for Setién to take his first victory at Barça. A great collective game and huge dominance based on the possession of the ball and a goal from Messi that gave Barcelona the victory. Without further ado, here are 5 takeaways from the Barcelona 1–0 Granada.

1. Formations don’t matter when the right identity is applied

One of the things that most intrigued fans was to know what formation was Quique Setién going to use. In his previous stage at Real Betis, the coach was a fan of the 3–5–2, but based on the Blaugrana players he had, the most ideal would have been a 4–3–3. The truth is that formation didn’t matter. In other systems such as Valverde’s or others, the formation is a primary basis for the manager’s approach. With Setién, though, using a 4–3–3, a 3–4–3 or even a 2–4–4 doesn’t make much of a difference. With the correct philosophy, any formation is valid.

In the end, Setién opted for a confusing but effective system. A 3–3–4 with a variable to 3–5–2. Messi acting as a false 9, Griezmann as a second striker and finally Jordi Alba and Ansu Fati placed on the flanks. With the reference of Leo, all players exchanged positions with each other. Moving continuously and positioning themselves with the objective of surprising the opponents to create and find the perfect gaps. The defence set up in a back 3, and was comprised by Umiti, Piqué and Sergi Roberto. In front of them, Busquets as the pivot alongside Vidal and Rakitić, despite the Chilean at times formed a double pivot with Sergio. The players pressed with the aim to recover the ball in 7 seconds at the most. If this wasn’t achieved, the pieces settled in the regular 4–3–3.

2. Busquets at his best level

Having a back 3 line, we never imagined the option of seeing the versatile Roberto working so well in that position. The idea of putting Sergi Roberto as a centre-back adds more value and benefits Sergio Busquets. Previously, with Ernesto Valverde, a very conservative build-up play was used. Busi used to be placed between the two centre-backs to start the play without risking much. The Catalan didn’t perform well. It was a stage where the ‘5’ looked out of place, lost many balls and clearly had many defensively mistakes. This is stage over.

Setién risked putting Sergi Roberto on that defensive line, leaving Busquets in front of them. The Octopus was in a totally comfortable environment for him. Everything revolved around him and worked perfectly. In defence, he pressed alongside Arturo Vidal, who formed a double pivot to recover the ball. In attack, he started the plays and was the engine of the team. That concentration, intelligence, solidity, circulation of the ball, fast movements and at the same time that calm, without being static, is what is needed to dominate the game. It’s safe to say that Busquets is back.

3. Riqui Puig is ready for more

With only 19 minutes played on his La Liga debut, Riqui Puig showed that he’s ready to start his legacy in his beloved club. Puig is one of those tricky players. His physique is one of his biggest advantages, precisely because nobody thinks it is. Everyone bumped into him, looking to beat him physically. Behind that visible little body, there is an intelligent mind that knows how to use its physique against rivals bigger than him, but more inexperienced in that regard. His incorporation is always a blessing for Barça. It’s not surprising that Barcelona scored the opener when Riqui entered the field.

In the few minutes he played, he was able to complete 36 passes out of 39, more than any Granada player. He recovered the ball that started the play which led to the winning goal. His movements, vision, intensity and aggressiveness were key to decentralise the rival defence. Dominating with the ball is crucial, but dominating without the ball is just as, or more, important. Riqui is perfect in both facets. He knows how to fool opponents to favour himself in any circumstance. If in just 19 minutes he was vital to win, with more opportunities he will mature even more like a professional. Riqui already has to be part of the first team. One of the most important takeaways from the Barcelona vs Granada.

4. Barcelona’s philosophy is back

Quique Setién represents everything that is the Azulgrana philosophy. He’s perfectly identified. Barça hasn’t dominated a game for a long time based on the possession of the ball. It is very different to have the ball for a long time, than to dominate the game with that possession. It is not the same to be flat and horizontal, than to take care of the ball and have an idea and a system that allows to score a goal. The club has the most qualified stars to take this approach. Only that, before Setién, this style it wasn’t applied. Fortunately, our identity is safe with this new coach.

A Barça’s match hadn’t been enjoyed for a long time. 921 passes completed from 1005. Barcelonismo at its best. The sensations were excellent. High and effective pressure that allowed us to put an end to the hopes of Granada to win their second consecutive game against us. The rival’s mentality was the same as in the first leg. But we were different. From being vulnerable in defence, with a very low intensity and being harmless in attack except for some lucky play by Messi or Suárez, to being a solid, aggressive and coordinated unit. First match. First victory. Not only did we win the game; we won the magic of the beautiful game.

5. Setién still has a lot to work on

It was an excellent start considering the obstacles that were on the table, like the absences and the adaptation of this new project. But, from the demanding point of view, there is still a lot of work to do. Setién arrived in mid-season with a locker room that was accustomed to other dynamics for more than 2 years. Although many of the players have that Barça DNA, they still have to adapt to this system again. Slowly but surely. There were many complications, especially when finishing the chances. We missed many goalscoring opportunities, sometimes the best decision wasn’t taken and some players looked very exhausted. Nothing to claim after the high demands in this week’s workouts, workouts that were previously very soft.

The players still have to go up another level to be ready before a more defiant opponent or in an away game. The good news is that this is just the beginning. It won’t be long for us to be dominant again. We will also have to see how it works in ordinary situations. If Quique could make a plan work so well with Vidal and Rakitić, who don’t fit in this approach so much, then just imagine what he could do with Arthur and De Jong. We also have to remember that Dembélé and Suárez are injured. They are players who can change the outcome of the game with ease. For now, what Setién did yesterday deserves huge recognition. These were the 5 takeaways from the Barcelona 1–0 Granada. Now we will have to wait for more games to draw more conclusions about this new era.

Barcelona 1-0 granada: match review
What did you think of this article?