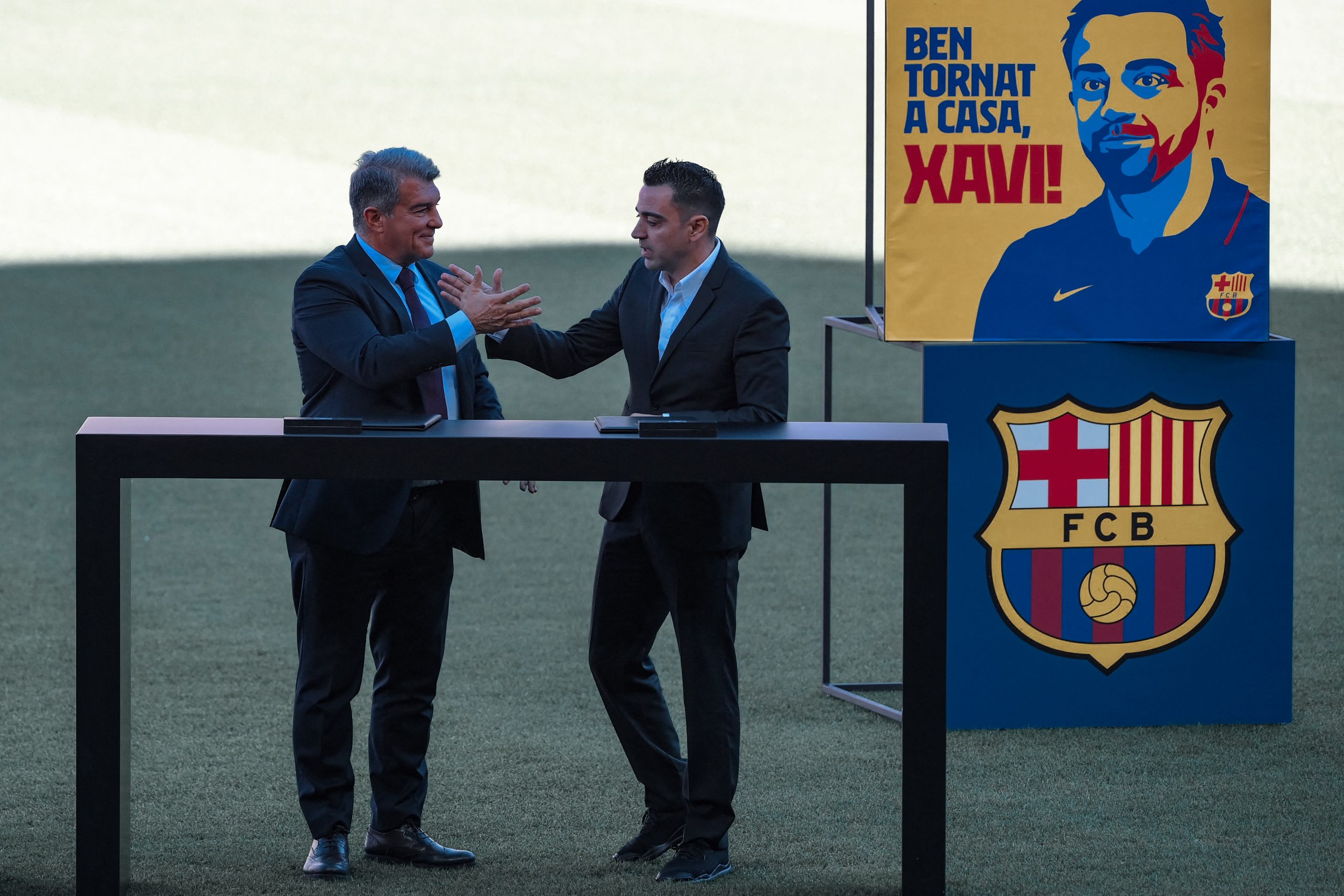 After an underwhelming first half to the 2021-22 season, Barcelona have a chance to reshuffle their squad and continue to build a competitive team. The extent to which that is possible, however, remains in question.

Bringing in key and influential players may be difficult as teams are unwilling to lose such players during the middle of a campaign. Still, the arrival of Ferran Torres is a positive start, and there is plenty the team can do.

In the following piece, Barça Universal will create a complete rundown of the club’s winter transfer market essentials, answering questions like who they should sell, who they should buy, and how Xavi can utilize his new players.

Taking into account the club’s financial situation and La Liga’s stringent salary cap, the Blaugrana must offload more players before bringing in and registering new signings. Take Ousmane Dembele’s situation, for example. The Frenchman was expected to sign a new deal at a lower-fixed salary, thus aiding in the registration of Ferran Torres. After news broke of Dembele’s intentions to move on from the Camp Nou, Torres’ registration is now in jeopardy.

In an ideal world, the club can facilitate the departures of high-salary-earners Philippe Coutinho and Samuel Umtiti, helping not only in the registration of Torres yet also freeing up space to pursue other targets. Both departures may be challenging to arrange, but they are generating sufficient interest from other clubs, and their contracts expire in 18 months.

A move back to England or Brazil may be on the table for Coutinho in an attempt to win a place in Brazil’s 2022 World Cup squad. As things stand, his role at Barcelona is limited at best; at 29 years old, he still has a few years left in his tank and could thrive in the faster pace and open space of the Premier League.

For Umtiti, Turkish club Fenerbahce are reportedly interested in acquiring his services.

In all, Coutinho and Umtiti’s departures will help the club financially, but they are also the right moves for both players at this stage of their careers.

More realistically, if Barça can, then they should terminate the loans of Luuk de Jong and Yusuf Demir. Luuk’s signing was ill-planned from the start, and the Catalans have already worked on his departure. His performance against Mallorca may have turned heads, though.

Reports indicate that Cadiz are looking to bring in the former PSV forward; whether the Dutchman would want to join them is another question entirely. Furthermore, the 31-year-old striker has offers from Italy, the Netherlands, and Turkey, specifically a return to PSV, to Besiktas, or to Fenerbahce.

Demir, on the other hand, has not made the impact the club had hoped, and they will likely not activate his €10 million purchase clause either. The 18-year old has made only nine appearances this season, totalling 294 minutes. Due to Xavi’s preference for wingers providing width and playing down the touchline, Demir is an awkward fit with his tendency to drift inside like a number 10.

The Catalans must also deal with the expiring contracts of Ousmane Dembele and Sergi Roberto. The former’s name has been all over the headlines recently, given the revelation of his reported salary demands. If the reports are to be believed, Barcelona should not tie themselves into such a deal.

If the Frenchman does not renew, they must determine whether he should spend the next six months on the sidelines or on the pitch. Both arguments have their merits, after all, he does make a substantial impact whenever on the pitch. Although, would it disrupt Xavi’s long-term plans to incorporate him at the expense of others like Abde, Ilias Akhomach or Ferran Torres?

Barcelona will reportedly try to sell Dembele should he not renew, and they are exploring creative options to “kill two birds with one stone”. Rumours state that the club are looking into a potential swap deal to bring in Manchester United’s Antony Martial. Such a move would benefit both parties, albeit Martial is not the flashiest name.

Sergi Roberto is currently on the sidelines and will be for the foreseeable future. If he denies signing a renewal or isn’t offered one by the Catalans and they receive an offer from him, they should capitalize on said interest. While he remains one of the most versatile players in the squad, the team has not sorely missed his output over his long injury spell.

In terms of loans out, ex-Barça B captain Alex Collado is set to join Granada for the remainder of the 2021-22 season. A player of his talent should never have spent five months on the sidelines, and hopefully, he can impress with Los Nazaríes.

Sergino Dest is also reportedly not in Xavi’s long-term plans, however, selling him in January would be premature. Though, his replacement may sign his Barcelona contract in the coming weeks – more on this later. Dest is only halfway through his second season with the Blaugrana and has shown genuine promise. After desperately searching for a long-term right-back, Dest deserves more patience.

In what may be one of their best signings in recent memory, Barcelona have already secured the arrival of Ferran Torres. The former Manchester City forward will surely be a boost to the front line for years to come. Now, who else can – and should – they target?

Juventus striker Alvaro Morata is reportedly one of Xavi’s top priorities, and reports indicate he has already agreed to personal terms. The 29-year old could theoretically fit well in Xavi’s tactical set-up, but he should be a backup option or rotation player, not someone to build around.

Furthermore, Barcelona should not sell players like Memphis Depay in order to secure Morata’s signing. If anything, the club needs more finishers akin to Ansu Fati and Ferran Torres, not someone who works better off a natural number 9. In all, there are other positions the club should prioritize reinforcing, although strengthening the forward line is critical.

The most glaring needs come from the backline, however, many of the club’s transfer targets are free agents who would arrive in the summer. Still, the Blaugrana can secure their signatures and prepare for their arrival. Soon-to-be free agents include Chelsea’s Cesar Azpilicueta at right-back and Andreas Christensen at centre-back, and Ajax’s Noussair Mazraoui at right-back.

Pursuing Azpilicueta makes sense on multiple levels: he brings experience, versatility, and leadership. Christensen has excelled over the last few seasons and could be an instant starter for the Catalans. At 25 years old, he is more experienced than others too. Mazraoui is one of the most exciting right-backs in world football and could solidify that position for years to come.

Elsewhere, Matthijs de Ligt remains a dream signing, but he will not be pursued or purchased in the winter.

The club is also keeping tabs on Valencia captain Jose Gaya as a long-term replacement for Jordi Alba, although Valencia may not be comfortable selling their defensive talisman in the middle of the season. Still, Gaya should be at the top of the Joan Laporta’s wishlist as he is the perfect replacement for Alba.

Last but not least is Erling Haaland, the player Joan Laporta will seemingly go to any lengths to sign. Like de Ligt, he remains a target for the summer, but the club can start talks with his agent Mino Raiola. In fact, Raiola also represents de Ligt and Mazraoui.

Overall, Barcelona must shore up their front and backlines. For now, the midfield is set; admittedly, a long-term replacement for Sergio Busquets will come up sooner rather than later.

If Barcelona can not sign any more players, at least they have La Masia to look to for help. Given January’s schedule (potentially eight matches in 31 days), including early rounds of the Copa del Rey and matches against bottom-table sides such as Deportivo Alaves, there are plenty of opportunities for youngsters to shine.

Additionally, the team has eight players currently out with COVID-19. If the recent match against Mallorca was any indication of what’s to come, then expect plenty of La Masia faces.

In goal, Arnau Tenas or Inaki Pena could make their official first-team debuts. This would also prompt the Catalans to offload Neto, who is attracting attention from Brazil.

With Jordi Alba, Sergino Dest, and Alejandro Balde out with COVID, Mike Marmol could also play a crucial role as a sturdy left-back. On the right, Roberto and Dest’s injuries, coupled with Oscar Mingueza, who has seemingly plateaued, could result in playing time for Guillem Jaime and Alvaro Sanz, the latter of whom made his first-team debut against Mallorca.

Jandro Orellana could also be tried in the number 6 position, not to mention more time given to Ilias Akhomach, who already has some first-team experience under his belt.

In addition to Ferran Torres and any other potential arrivals, Xavi will also be able to count on Dani Alves, who can be registered, and Pedri, Ansu Fati, and Memphis Depay, all returning from injury.

By the end of January, we can be looking at a completely new Barcelona squad, one that is hopefully further up the table, a few rounds into the Copa del Rey, and potentially holding the Spanish Supercup trophy. Joan Laporta, Xavi, and Mateu Alemany have a busy month ahead of them.