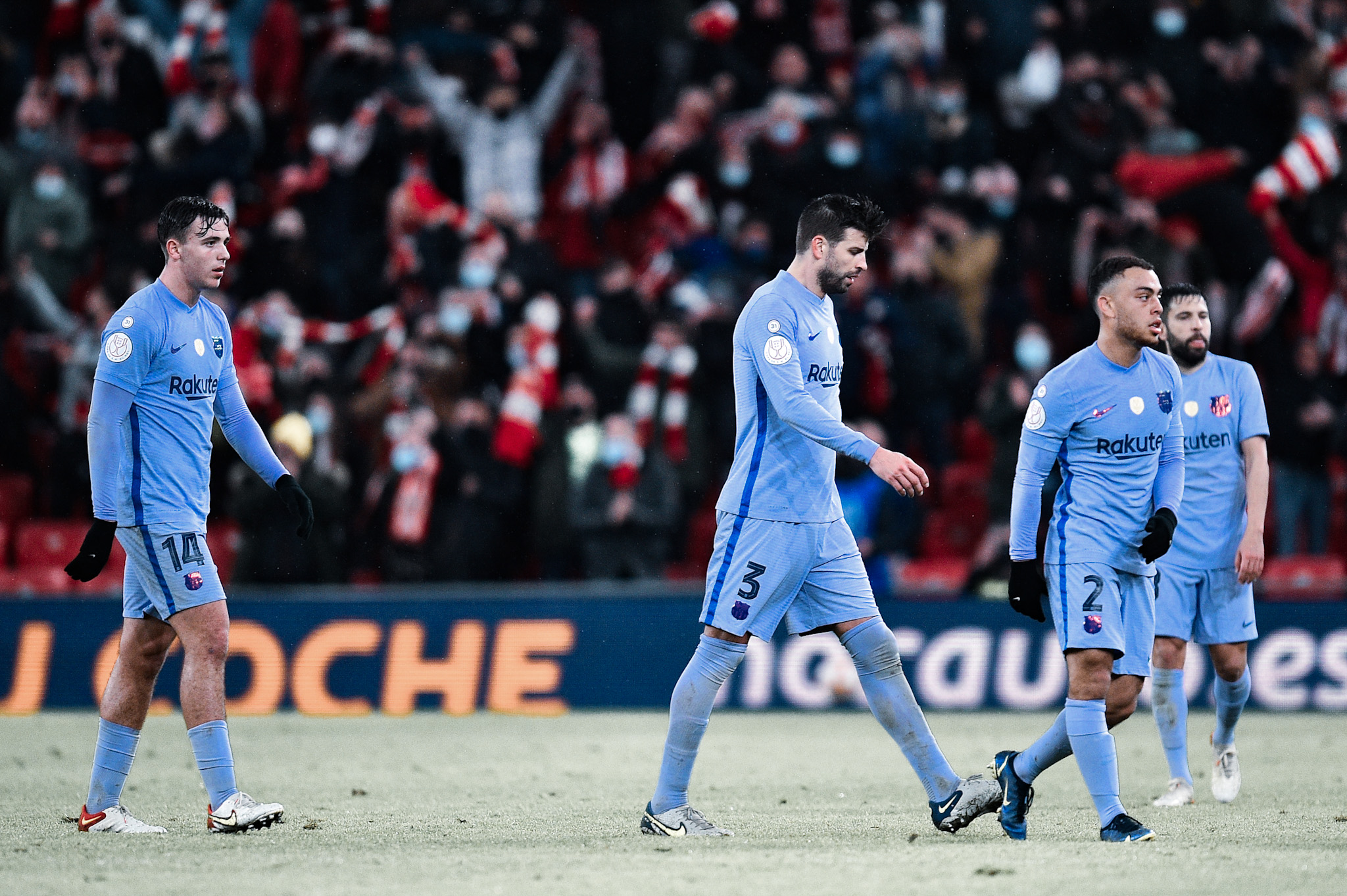 Of all the ways Barcelona could have gone down fighting, the display on Thursday was one of the worst. The Catalans went down twice and indeed showed character to fight back on both occasions. However, that does not take away the fact that they were outclassed, outplayed, and outdone at San Mames.

The game against Athletic Club was never expected to be easy, and it lived up to its hype. After 120 exhausting minutes of football, Barcelona were not only out of the Copa del Rey but also lost Ansu Fati, and went close to losing Pedri in addition to a dip in morale.

1. The winner was never in doubt

Coming off a defeat in the final of the Supercopa de Espana, the Basque side had no dearth of motivation. Right from the get-go, Marcelino’s side demonstrated their passion and desire to win. It was that very factor that enabled them to outperform their opponents in the decisive clash.

Wasting no time, the Bilbao-based side scored the opener in just the third minute. As opposed to the traditional ritual of slowing down after scoring, their energy was only boosted by the early goal.

They had five big chances as opposed to Barcelona’s zero, showing that the Catalan’s goals were down to individual brilliance and not teamwork. Most importantly, they worked like a tireless machine when off the ball, winning 67 duels in the game.

On the night, several players in the garnet-and-blue recorded poor performances. Dani Alves had a poor game apart from his classy assist. Gavi too was sloppy in possession and struggled to execute his role as a ball carrier. Among substitutes, Frenkie de Jong seemed to be playing against his team, and the same can be said about Ferran Jutgla in the attack.

However, none of them had a worse and more embarrassing outing than Jordi Alba. On the night, the left-back was not only mercilessly cut apart but also toasted on a live barbeque.

Marcelino deployed Nico Williams to operate the wing and take on Alba, for the tactician knew that the Spanish defender would be overwhelmed by the challenge. And without surprise, the tactic worked a charm.

The Athletic Club academy player provided four key passes and recorded two shots on target as Alba gasped for breath trying to keep up. Alongside Dani Garcia, the youngster lit up the flank and toyed around with Barcelona’s left-back.

In addition to being dribbled past thrice in the game, Alba also gave away the penalty that won the game for Athletic Club. Needless to say, the decision was unjust for it was never a spot-kick. However, the situation arose because of the No.18’s inability to keep up. In all, Alba lost possession 33 times on the night.

Serious questions need to be asked over his position as a guaranteed starter. Without Lionel Messi on the pitch, the Spaniard has been a shadow of himself. Moreover, his inability to keep up defensively has cost Barcelona on several occasions in recent years.

Ansu Fati came on at the hour mark to resume duties in Barcelona’s forward line. However, the youngster had to be replaced just 45 minutes later with an injury. Later, Barcelona confirmed that the Spanish international suffered a relapse of his previous injury and could face close to 2 months out of action.

Minutes after the incident, Pedri Gonzales too indicated that he wanted to be replaced. The star midfielder felt a nagging discomfort and was quickly substituted off. The extent of his injury remains unknown. Ronald Araujo fell on his fractured hand painfully, and though he continued to fight on, it remains to be seen if he has damaged the healing bone.

Barcelona face Deportivo Alaves in just three days, and Xavi could once again be facing the absence of key stars. While Ansu’s absence is confirmed, it remains to be seen if Pedri can start again in such a short time.

Just when it seemed like the tide was favouring the Blaugrana, a drastic turn has seen them back where they started. Xavi’s man-management becomes critical from this point on, for Barcelona cannot afford any more injury blows.