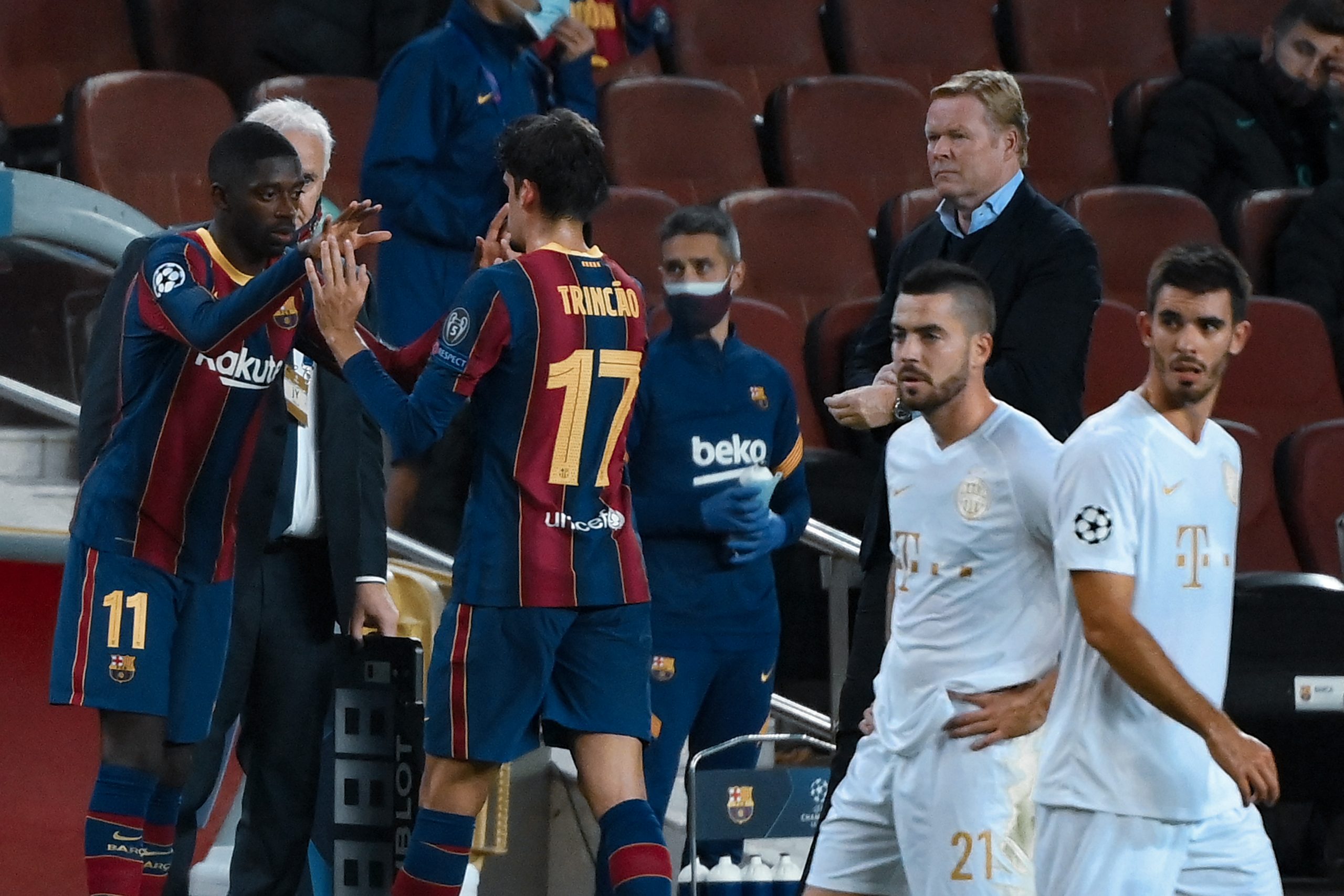 Ronald Koeman’s handling of players has been exceptional so far. He’s been giving youngsters plenty of chances while also resting them in order to ensure that they don’t suffer from mental fatigue. In Francisco Trincao and Ousmane Dembélé, the Dutchman has two potential game-changers in his arsenal.

Those two, coupled with the likes of Lionel Messi and Antoine Griezmann means the Dutchman has plenty of options to deploy at the right-wing. With Messi playing centrally in the Dutchman’s 4-2-3-1 system, and with Griezmann urging to be played in a more comfortable role (in the centre, either as a striker or as an attacking midfielder), Koeman is left with the two prodigious youngsters, so which of them should be the first-choice right-winger for the Blaugranas?

Purchased from Braga for an estimated, 31 million euro transfer fee, Fransisco Trincao was brought in for his huge potential. He is an intelligent player who has no issues navigating through tight spaces. He provides something that the Barcelona team has been missing for the last few years: width on the right-wing.

Trincao has a sharp eye for goal and is fantastic in finding the net during 1v1 situations. Not only is the Portuguese a qualified goalscorer, but he is also creative and is capable of providing line-breaking passes.

In the 19/20 season, as a 19-year-old, Trincao registered nine goals and 13 assists and managed to have a ratio of either a goal or an assist every two games in the Europa League. After his impressive performances during Barcelona’s pre-season, the Portuguese may have already secured Ronald Koeman’s trust.

Trincao seems sharp, but at 20, has a long way to go and a lot of improvements to make. (Photo by Josep LAGO / AFP)

However, there are times where he looks slow to react and takes too long to shoot. That coupled with his relatively poor off-ball positioning are some of the glaring areas of concerns in his game.

He is just 20, though, and aspects such as his sharpness, movement and his decision-making will improve with experience. In his first season at Barcelona, he can prove to be a very efficient super-sub, who can work his magic on tired legs.

The Ousmane Dembélé storyline has been going on for more than 3 years now. Purchased for a mesmerizing 120 million euros from Dortmund in 2017, the Frenchman was set to do great things at Barcelona, but since his move, he’s been plagued by injuries. Now, more than ever, he looks close to the redemption arc that fans have been crying out for.

Dembélé, who had a clean injury record at Dortmund and Rennes, was hailed as the most injury-prone while at Barcelona. While the ravenous Spanish media has been blaming his supposed misbehaviour (staying up late at night, eating unhealthily), his injuries can be linked to the club’s mismanagement of him.

It’s no secret that Barcelona’s training and pre-match warmup was nowhere close to being adequate. As a matter of fact, former Inter Milan manager Lucian Spaletti, infamously said, “If we warmed up for games like that [Barcelona], we’d lose 0-18”.

With Ronald Koeman in charge, Barca’s training and warmup is said to have become more vigorous and demanding, which will definitely benefit Dembélé, and will help him remain fit.

Dembélé excelled versus Juventus, scoring the opener and completing 5 dribbles in the game. His passing was extremely sharp as well.

While the first half was a huge let down, Dembele was far from the problem. (Photo by Cesar Manso / AFP)

In Barcelona’s 1-1 tie versus Alaves, however, Koeman chose to take off the World Cup winner at half time despite Dembélé having had a good first half, where he often found himself in the opposition box without any players to cross to.

A fit Ousmane Dembélé is a pleasure to watch. His searing pace and his outstanding dribbling ability make him a force to be reckoned with. He’s a player with that x-factor, a player who can decide the outcome of games nearly singlehandedly.

Dembélé’s creative prowess and his ability to find players in the box can greatly benefit the team. Furthermore, the Frenchman provides width on the wing. The 23-year-old can occupy the opposing team’s left-back, creating space for players like Lionel Messi or Antoine Griezmann to exploit.

Dembélé is a game-changer; his inconsistently is a result of his poor match fitness. A fit Ousmane Dembélé can change the course of the season, for the better, and should be the first choice at Barcelona, until a player can prove otherwise.