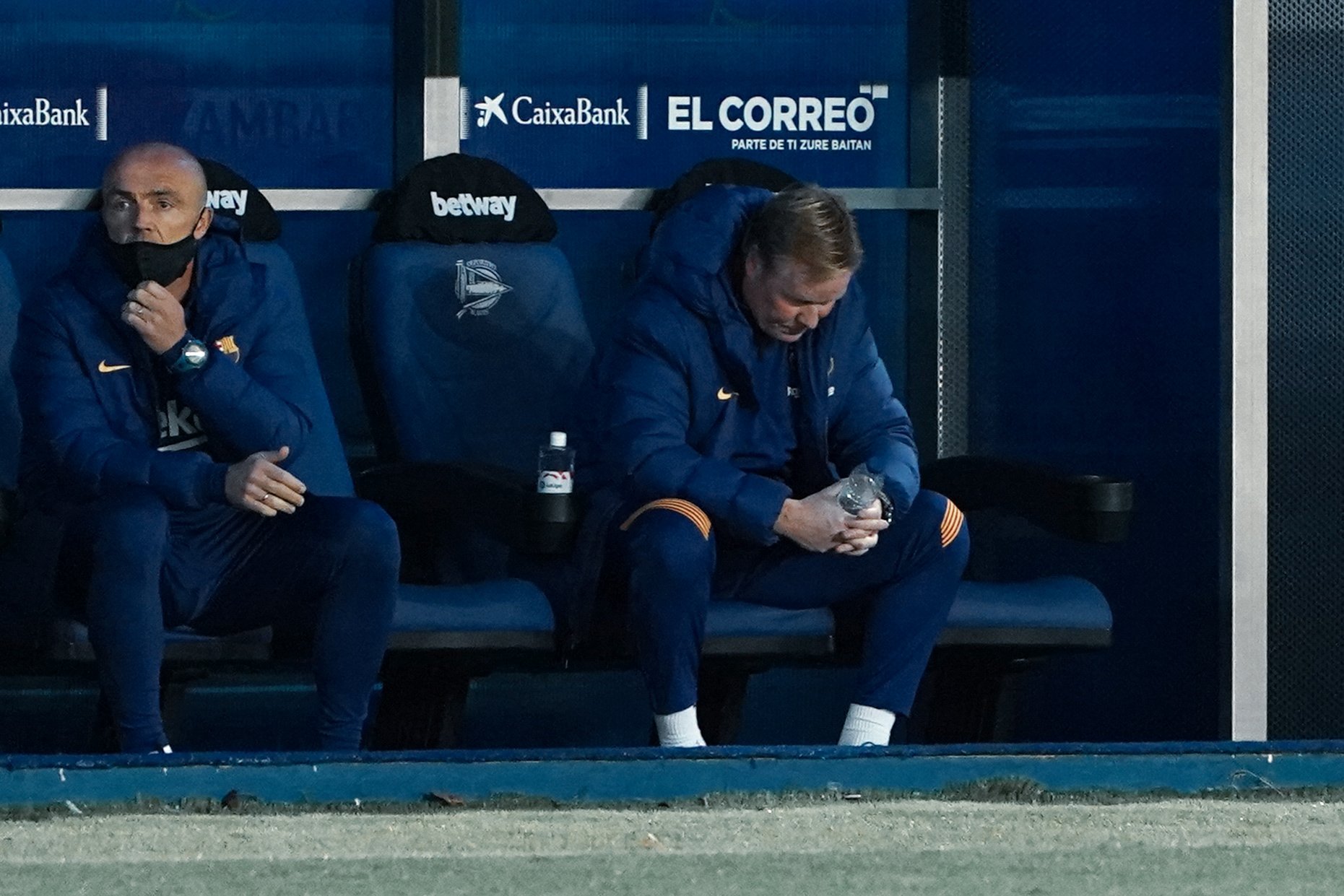 Barcelona slumped to another disappointing result in La Liga this season. Deportivo Alavés have struggled in the league and find themselves in the bottom half of the table, along with the Catalan side. The Blaugrana find themselves sitting 12th in the league with just eight points after six games played.

After a poor first half, the away side pushed for the win in the second period. Despite having 25 shots on goal, Barcelona struggled to truly test Fernando Pacheco in the opposition goal. Though the home team went down to ten men in the 62nd minute, Barça could not take advantage of the extra man. Barça Universal now runs the rule over Ronald Koeman’s men.

The Brazilian shot-stopper had a relatively quiet game overall with Alavés rarely threatening his goal. However, in the first half, the Brazilian had a rush of blood and seemed to lose his concentration as he burst forward unnecessarily. As Gerard Piqué passed the ball back to Neto, he was caught off guard and controlled the ball awkwardly, allowing Luis Roja to tackle him easily and score the opener.

Description of the first half. (Photo by Cesar Manso / AFP)

Apart from this, the back-up goalkeeper had a relatively uneventful evening. However, his mistake proved costly as Barcelona dropped more points this season. With Marc-Andre ter Stegen back in training, Neto did not do enough to help himself.

Roberto started his second game in a row over Sergiño Dest as Ronald Koeman preferred experience over youth. The Spaniard had a solid enough game but did not offer much going forward in the first half, partly due to a conflict of space with Ousmane Dembele.

When Alaves went down to ten men, the full-back was then pushed much further forward, and made five key passes – more than anyone on the pitch. A display like this in the first half would have probably helped Barça get the three points.

The experienced central defender returned to the starting line-up after a suspension ruled him out for the UEFA Champions League game midweek. While Piqué had a comfortable enough evening, the mix-up between him and Neto ended up costing Barcelona a vital two points as they drew against Alavés.

Another player that had a solid enough game was Clément Lenglet. He was useful in the build-up play, and his left-foot proves to be a real asset at breaking opposition’s press. The Frenchman did well to stop Alaves threatening the Barça goal too much. He can, and was found out of position at times, but did well to cover up by reading the opposition move.

Jordi Alba has seen an improvement in his performances this season. The Spaniard continuously attacks down the left-hand side of the pitch, making runs in behind the opposition’s defence. However, against Pablo Machín’s men, Alba offered himself on plenty of occasions during his time on the pitch but was not found by his teammates. He was also sloppy in possession.

Another player that had a decent match without doing anything special was Frenkie de Jong. He kept the game flowing for Barcelona and performed his role well without particularly standing out. The Dutchman’s partnership with fellow midfielder, Sergio Busquets, does not seem to be working as the team went 1-0 down into the break.

The veteran midfielder has not been at his usual best this season. Busquets put in a solid enough shift for Barcelona but was hooked at half-time and replaced by Pjanić. He kept the game moving well enough and was fine in his defensive duties, but he is still far from his usual best. The 32-year-old is struggling to adapt to his new role in the double pivot as he finds himself in more attacking areas of the pitch than normal.

Culés were excited to see the Frenchman start for a consecutive match as he begins to get more game time after a long injury. Dembélé had played well against Juventus midweek, and he offers that unpredictability and raw pace that this Barcelona side has sometimes lacked.

However, nothing seemed to go right for the speedster as he lost the ball too often and just dribbled into dead-end areas. He did make use of his pace on several occasions to get in behind the Alavés defence but was unable to successfully pick out a teammate with crosses or cutbacks. The World Cup winner was replaced at half-time by manager Ronald Koeman after a disappointing cameo.

The Argentine was certainly involved enough in the game as he desperately led his team to try and take all three points. Nothing seemed to quite come off for Barça’s captain as he relentlessly dribbled at his opponents and pushed his team forward.

Babazorros El Glorioso knew to target Messi, and he found himself surrounded whenever he got the ball. The forward’s drought for an open play goal continues, and this is becoming worrying for Barcelona. He lacks his usual clinical edge when scoring chances come his way.

In an evening where not much was going right for the Catalan side, the 18-year-old tried his best to earn his team the win. Fati’s mentality is impressive, as he continuously fights to win each game. However, it was not to be as Barcelona struggled to get going in the match and were often crowded out in the final third.

Ansu Fati was a constant threat going forward and the birthday boy tried his best to help win the game. He had a few decent chances to score after making excellent runs behind the tough Alaves defence but could not apply his usual clinical touch.

It was great to see Griezmann finally score for the Spanish giants this season. The 29-year-old put in a lot of work defensively during the game, which was admirable. He tried to get involved in the build-up play but was sometimes crowded out too easily by the home side’s defence. He was unlucky not to score a second goal as it was ruled out for offside, but hopefully, this performance will build some confidence for the forward and Culés start to see the best version of the former Atlético Madrid star.

The team looked a lot more fluid in the second period and Pedri helped with this. The 17-year-old continues to impress and shows loads of ability and confidence. He picked up some great positions on the pitch and helped move the ball a lot better than was done in the first half.

As the Bosnian came on during the interval, he tried to lift the pace of the team. Pjanić was useful in possession, comfortably playing one or two touch passes. He had a more successful time than Sergio Busquets and has now put in a few positive performances. It will be interesting to see if he manages to secure a starting role in the team as the manager must be considering this now. He does need to cut out some mistakes though, as these can put the team in trouble.

As a half-time substitute, Trincão was a lot tidier on the ball than Ousmane Dembélé. The youngster is certainly eager to impress and is already showing a lot of intelligence whenever he plays. The former SC Braga man looked to create and make an impact on the game.