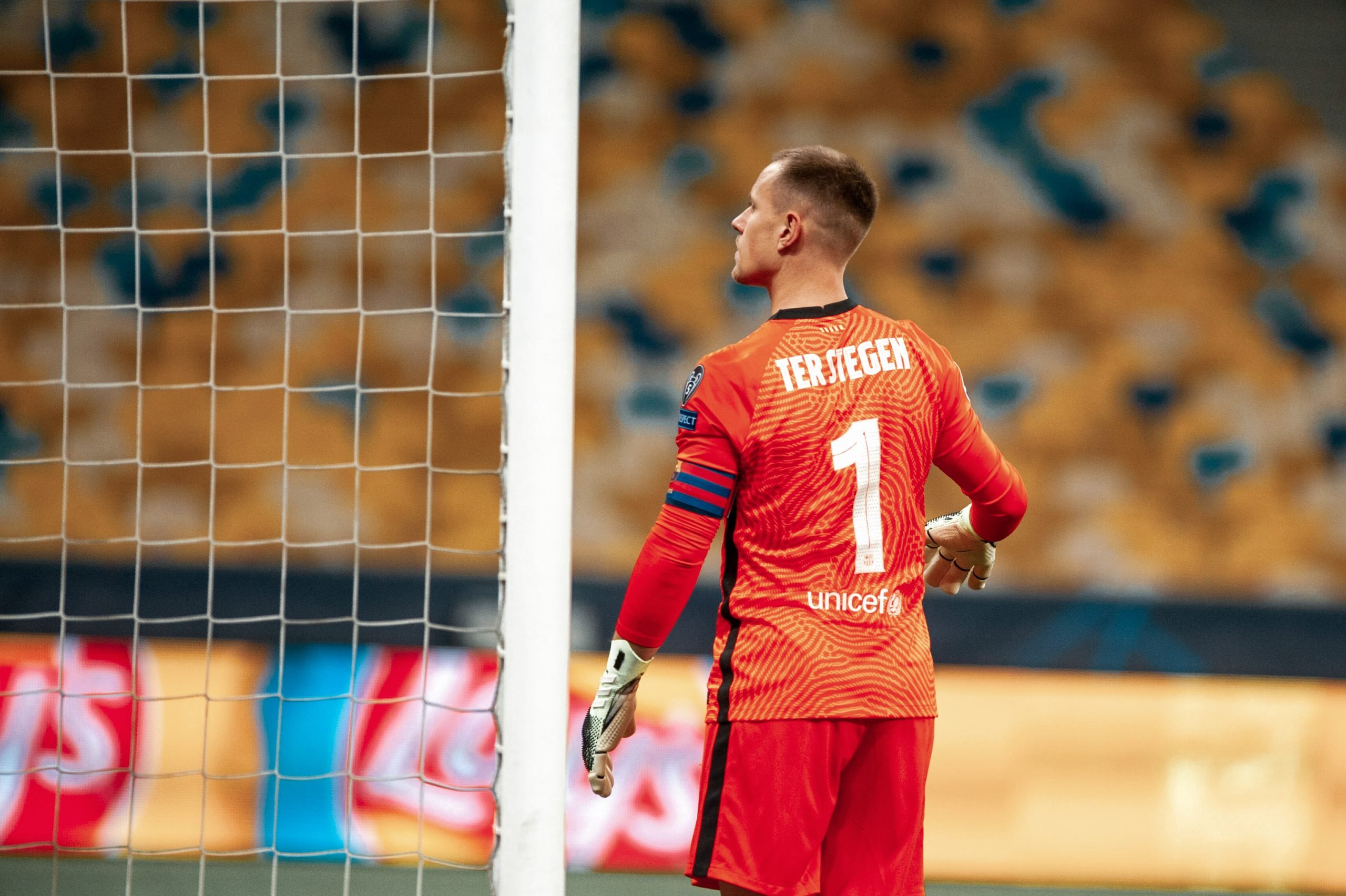 As with many members of the Barcelona side, Marc-Andre ter Stegen can be a divisive figure for fans. With his abilities and the responsibilities held by a Barça goalkeeper though, how much of the scrutiny he faces is justified?

Playing in goal for Barça is a tough task. The mix of responsibility in possession, playing behind a high line, and, of course, the general pressure from fans and media make the role one that is not suited for many.

Filling that role in 271 total matches over the last seven seasons has been Marc-André ter Stegen. In that time, the German has experienced some of the club’s all-time highs and lows, but what portion of these events should be attributed to him? This is an issue that, particularly in recent years, has clouded the judgment of many when it comes to ter Stegen’s quality.

Individual score lines, collective performances, nostalgia, and more have all seemingly been jumbled into the conversation while taking a step back and truly attempting to gauge the German’s performance has become rarer.

Fans will never fully agree on all topics, yet improvements can be made by trying to remove as much bias as possible. When taking a wide variety of factors into account, it should be realized how lucky Barça have been to have ter Stegen.

While many magnify the German international’s mistakes and stretch them over years and years, not only his strengths but his truly world-class abilities cannot be ignored.

Based on the most advanced shot-stopping metrics, ter Stegen is among the top tier of goalkeepers over longer stretches of time. This can be seen with StatsBomb’s post-shot expected goals, which measures the likelihood of a goalkeeper conceding from a shot based on its location, trajectory, velocity, height, and more.

ter Stegen has outperformed his post-shot expected goals conceded by a total of 12.4 (0.09 per 90 minutes) in La Liga since 2017/18. Thus, he has saved 12 more goals than the average goalkeeper would have been expected to save, given the quality of shots he has faced.

Taking ter Stegen’s mix of skills into account, there are maybe two, maybe three, keepers out there who you could start to argue would be better in the context demanded at Barcelona.

Even then, some keepers are good with their feet and pass the ball a lot but have never been asked to do some of the things ter Stegen does consistently. Whether this is splitting opposition forwards to find Sergio Busquets or pinging the ball into a static pair of feet instead of just a general area, a Barça goalkeeper simply does not operate like those in most other sides.

This does not mean ter Stegen is necessarily a top 2-3 keeper in the world, but in terms of how others would perform at Barça, almost nobody has the profile to match him.

This stretches all the way back to 2017/18 and across multiple competitions, so this is not just a display of a hot or cold stretch of form, but high-level output.

The metric for sweeping is particularly imperfect, but this seems to paint the picture well. ter Stegen, an elite shot-stopper and distributor, putting him among elite company while just an above-average sweeper.

Now, this is where we can start to get into some fair criticisms of the German. However, it should be clear that genuinely believing or spreading some agenda that ter Stegen is trash — a truly bad goalkeeper in the sport of football — is irrational.

It should go without saying that the German international is not perfect, and there are aspects of his game that can be rationally analyzed and classified as a weakness. Are there times when he fails to come out and sweep fast enough? Absolutely.

Part of this is because ter Stegen trusts his exceptional reflexes and one vs one shot-stopping technique, but it is safe to say that sweeping is the area of his game that lags most behind the rest.

In the first leg of this season’s Champions League tie against Paris Saint-Germain, for instance, ter Stegen could have possibly prevented the French side’s second goal. Clément Lenglet and Jordi Alba had both stepped up very high, Leandro Paredes had his head up and was looking for a passing option, and there was plenty of space for Alessandro Florenzi to run in behind.

Had MAtS recognized these cues earlier and started to shift and step out of his goal, he could have beaten Florenzi to the ball. In the end, though, the Italian full-back finally got to it deep in Barça’s penalty area, where Kylian Mbappé soon pounced on a bit of a luckily-falling attempted clearance from Gerard Piqué.

So, when looking for the relative weakness in ter Stegen’s profile or talking about what he could look to improve upon, sweeping is a fair point. It is just important to ask some questions:

How much does his sweeping play cost the team?

How does this compare with the goals he prevents with his shot-stopping and the offensive value he provides with his distribution?

What other goalkeepers out there could really provide more overall value than him in this Barça side?

That last question, while aimed at the present day, could conjure up memories of a certain former Barça number one. Trying to directly compare the skill level and value of ter Stegen and Víctor Valdés is not the point here, but looking at the differences in how they carry themselves provides a bit of a window into why some tend to give ter Stegen an irrational amount of stick.

There are certain misperceptions regarding the mentality of a footballer and how they must go about displaying that mentality that hurt the German in this regard. ter Stegen is not someone who is loud, outspoken, and very open with his expressions on the pitch. He does not really scream and bark orders and celebrate wildly in the old-fashioned passionate sense.

Instead, he is far more reserved, not introverted and lacking a command over his backline, but just choosing to express himself differently.

This is in contrast to how Víctor Valdés conducted himself. Since Valdés came first, became a club legend, and was a part of the club’s most successful era, it can put a stain on anything ter Stegen does that is different.

Obviously, leadership and passion can come out in different ways, but it just does not seem as though ter Stegen gets the benefit of the doubt that others (like Messi) who conduct themselves in a non-traditional manner get.

What people should see is that the German is focused, calm under pressure, confident, he takes responsibility, and he does not complain about the cycle of ageing, injury-prone, or non-technically gifted defenders he has had to line up behind throughout his tenure while continuing to churn out high-quality performances.

Something else that tends to be detrimental to ter Stegen’s reputation is an overemphasis on single performances, or even just moments, or even just team results in high-variance settings.

This is particularly true for one or two leg elimination ties in the Champions League knockout rounds. There, the German has experienced some of the club’s biggest embarrassments, but even ignoring the luck involved in these singular matches, how much of this is really his fault?

Over the course of the 2018/19 Champions League semi-final tie against Liverpool, he faced shots worth a total of 3.2 PSxG and ended up conceding four goals. Could he have done better? Yes, especially on Liverpool’s second goal it could be said, but he was still expected to concede three.

None of the other players saw Trent Alexander-Arnold’s corner kick coming and got in position faster. Throughout the tie, Liverpool’s runners were allowed into the box with poor marking. Barça’s attackers failed to convert chances. It was a collective meltdown from the side, and a matter of when, not if, Liverpool were going to breakthrough.

Some of the blame falls to ter Stegen of course, but it is one match from an overall great campaign, where the whole team crumbled. Then, against Bayern Munich last season, ter Stegen faced a total PSxG of 6.4. It should go without saying that if he managed to only let in 7 or 6, it would not have made any difference whatsoever, and his performance probably would not be perceived any differently as well.

As mentioned previously, the German has consistently outperformed his shot-stopping over Champions League campaigns as a whole. Still, these singular, high-variance matches where Barça collectively imploded seem to be valued disproportionately by many.

When people take these two or three performances, which, remember, are already occurring at an elite stage (the last eight or four in the Champions League) during campaigns in which the former Borussia Mönchengladbach keeper that have been impressive and value them over hundreds of other matches where he has consistently saved the team goals, how people perceive him can be awfully skewed.

Essentially, the main issue with how many view ter Stegen is that lack of perspective. There is a lot of nostalgia, outcome bias, selective memory, and overemphasis on individual matches involved in this.

It is fine to point out his weaker areas, which do exist, and acknowledge when he has a poor performance, but this has to be done with maturity, and context has to be taken into account.

On the more supportive end of the spectrum, some would already call ter Stegen a Barça legend. Is he one? That title is not really the issue – all fans have different definitions and criteria. Furthermore, as crazy as it may sound, the German’s Barça career might not even be halfway done yet. Who can say what the next seven seasons (or more) will bring?

What should be widely recognized, though, is that ter Stegen has won everything there is to win in a Barça shirt and has remained a key piece in the squad through a period of extreme turmoil.

If it were Manuel Neuer in goal for this period, Barça fans would be distraught with some of his shot-stopping form. If it were Alisson, fans would go crazy with his misplaced passes to rivals that gave away goals. There will always be a desire for perfection, but there also needs to be an effort to keep things in perspective.

The goalkeeper position can serve as an easy scapegoat or way out for those who do not know or choose to ignore the real structural issues of a team. For some outside fans, this is because they really do not watch the team yet still share their plethora of opinions for some reason – maybe the club is trendy, good for engagement, maybe it has become an easy joke target in recent years, etc.

For other fans, this is probably because of some factor out of the keeper’s control – their background, the fact they were not at the club in a certain past era, etc.

Again, the desire for perfection among supporters is understandable and even beneficial in some cases, but these biases have to be limited. No player, no goalkeeper, is perfect, but as far as their value within the Barcelona style of play goes, ter Stegen is as good as it gets.