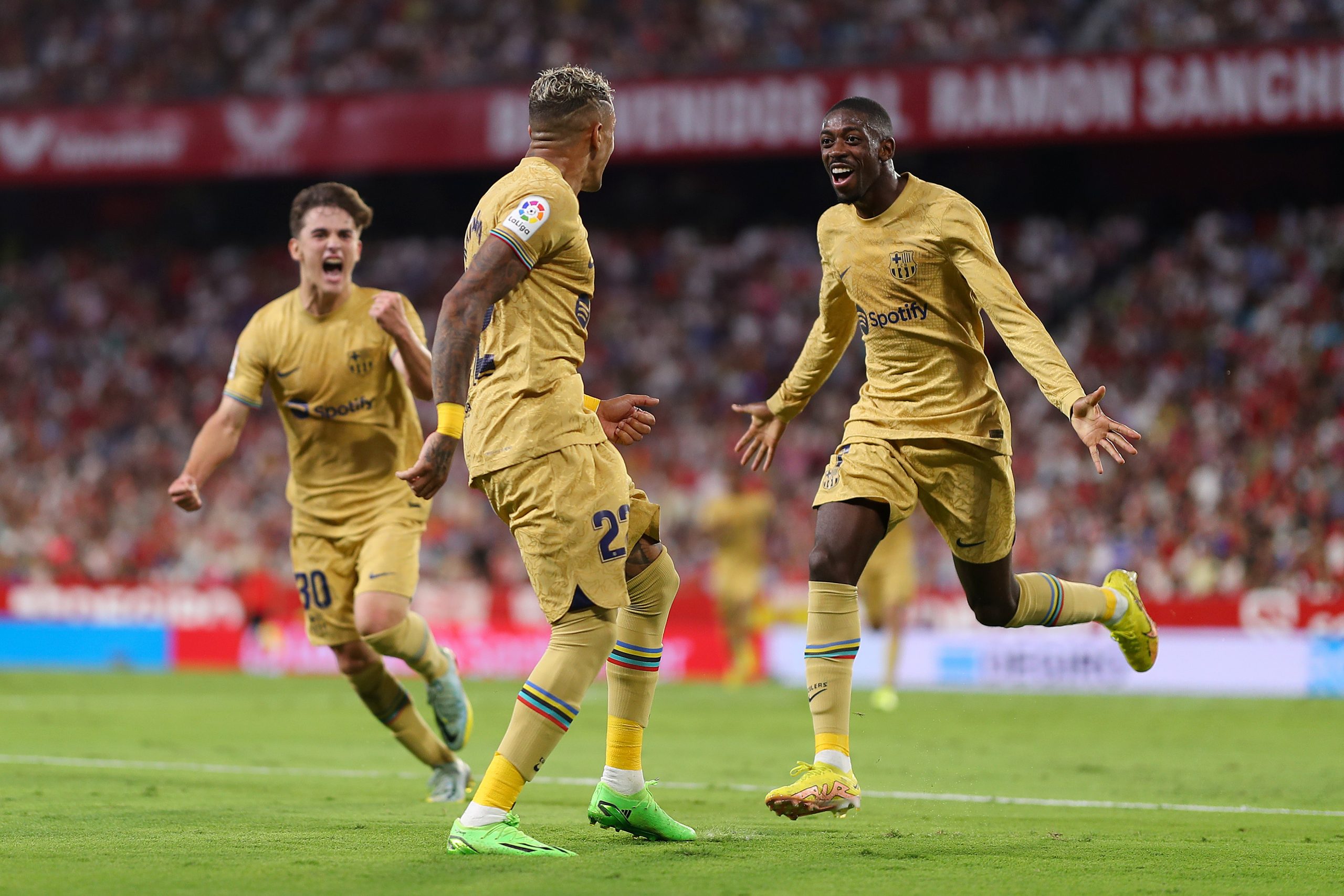 La Liga’s early kickoff of the day saw Real Madrid take down Real Betis with a 2-1 scoreline, opening the chance for Barcelona to jump into second place with a win.

However, facing a stern test of their own, Barcelona faced Sevilla at the Ramon Sanchez Pijzuan.

Xavi Hernandez opted to make no changes from the team that defeated Real Valladolid last week. Meanwhile, Julen Lopetegui made a whopping six changes from his last lineup.

The hosts began the game on the front foot and dominated the opening quarter of an hour on the ball. Not only did Sevilla maintain possession during their dominant spell but they also created a string of chances that they failed to put away.

The first such chance fell at the feet of Ivan Rakitic in the fifth minute. However, Los Nervionenses’ biggest opportunity arose in the 19th minute when Isco was one on one against Ter Stegen.

Barcelona opened the scoring at Ramon Sanchez Pijzuan in the 21st minute when Robert Lewandowski chipped the ball over Bounou and toward the goal. The Pole’s effort was cleared off the line by Fernando, but Raphinha was there to bury the rebound.

After the first goal, the visitors began to take charge. Sevilla’s defence began to look more and more porous with every passing minute and Barcelona’s forwards grew in confidence.

The 36th minute saw the Blaugranas double their lead. The goal was a work of pure individual brilliance from Lewandowski, who continued his blistering start to the season.

Jules Kounde’s phenomenal pass into the box found the No.9. After a perfect first touch with his chest, the striker turned and volleyed the ball past Sevilla’s goalkeeper.

The first half ended with the visitors leading by two goals. Yet, that number could have been more had they put their chances away efficiently. One such opportunity arose in the 45th minute when Dembele decided to go solo instead of passing to Lewandowski, who was in front of an open goal.

The second half got off to a perfect start for Xavi’s men with a goal in the 50th minute. Jules Kounde got on the end of Raphinha’s cross, setting up Eric Garcia for a simple tap-in. Notably, it was the French defender’s second assist of the game.

The goalscorer came off in the 54th minute after suffering an injury and Sergi Roberto replaced him. That also meant that Barcelona featured an Araujo-Kounde combination in central defence for the test of the game.

The Catalans’ lead almost extended to four goals at the hour mark when Roberto sent a long cross to Lewandowski in the box. The striker stretched and connected with the ball, but Bounou pulled off a stunning save.

Another golden chance came by in the 72nd minute when Lewandowski and Frenkie de Jong both struggled to put away their chances.

The final twenty minutes went by quickly, with neither side having the upper edge. The possession was equally split, but Barcelona created the better chances.

With this win, the Catalans move to second place in the La Liga standings, just two points behind Real Madrid. They next face Victoria Plzen midweek in their first UCL clash of the season.