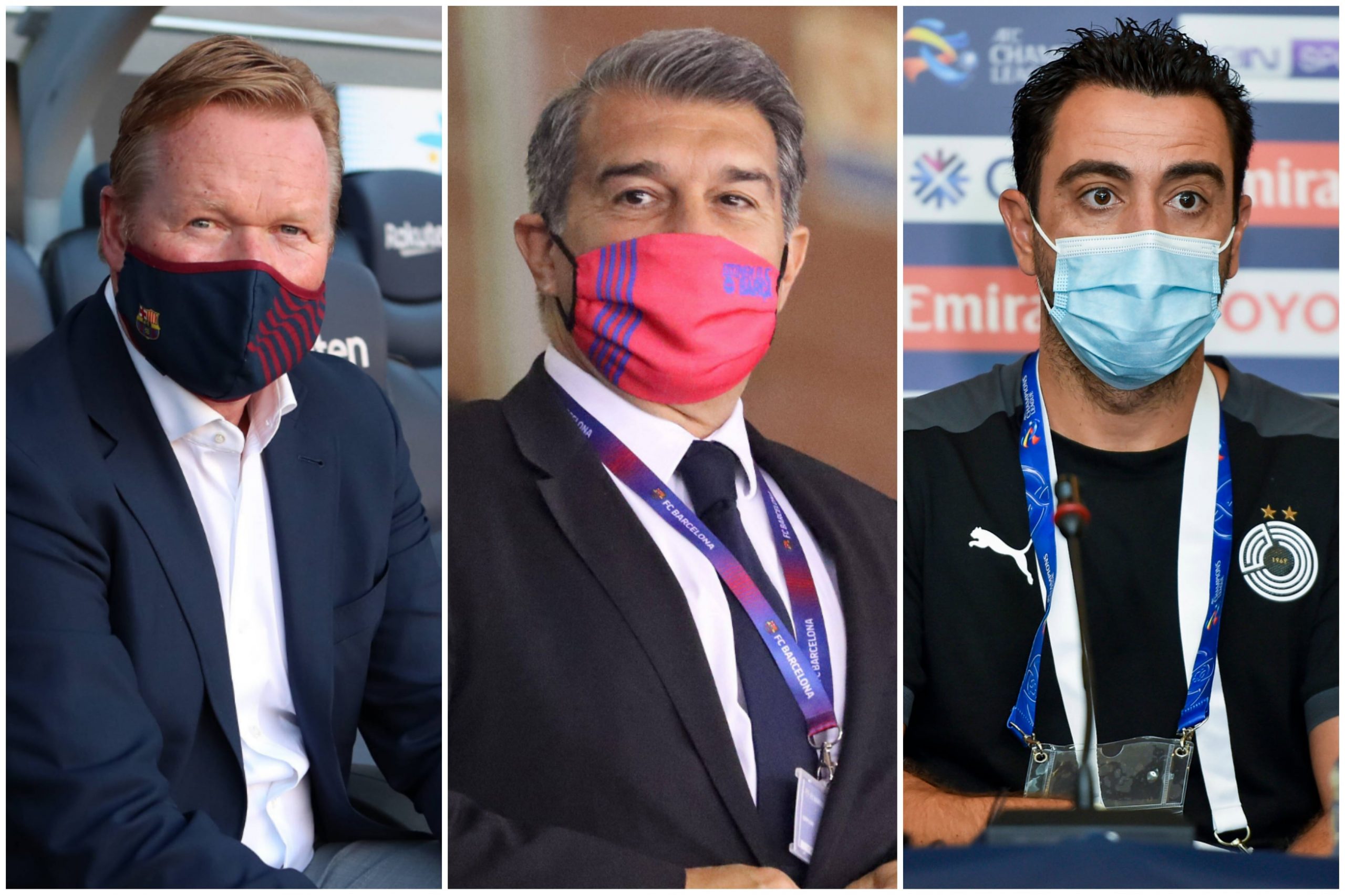 With Barcelona’s campaign closing with a tumultuous run of games which has seen them concede 12 goals in the last 7 fixtures, effectively handing away La Liga, Ronald Koeman’s future is now more uncertain than it has ever been since his appointment. Several alternative options have been outline by Joan Laporta, such as Garci Pimienta, Xavi Hernandez, and Jürgen Klopp among others.

However, reports from the ever-reliable Helena Condis claim that the option of Xavi becoming head coach of Barça from 2021/22 onwards does not entirely come as an accepted consensus among the technical secretaries and board members of Barça.

Presumably, his inexperience, and the risk of letting Koeman go after he has created a decent foundation with the team, might be factors that have caused Laporta to second-guess betting on Xavi with full certainty.

We have to note that Xavi has landed in Barcelona for vacation with a total of 22 cases of luggage, creating speculation about the fact that it could be a one-way trip. In the airport, when asked regarding the rumors, the club legend said: “I don’t know anything, I’m on vacation, really.”

However, reports earlier today outlined that Laporta is 99% sure that he does not want Koeman to continue next season. It is believed that the Dutch manager is very ‘touched’ by this news; he feels that his work has gone undervalued.

His current sensations are more than understandable; the 58-year-old had even given up his comfortable role with the Netherlands National Team to take a job at the Catalan capital, especially in a time where Barça were in total crisis.

Having won the Copa del Rey — as well as integrate so many new youngsters into the first team dynamics — Koeman probably feels that he has earned another season in Barça. Nevertheless, it is important that Laporta and co analyse alternative options to the Dutchman before finally coming to a consensus on whether he should remain or not.

In a video captured by Cuatro, the Barça legend and coach can be seen bothered when asked about the potential appointment of Xavi as the new head coach come next season. In favour of the Dutchman, he has hardly been given the squad he wished for at the start of the season.

Xavi is in Barcelona. pic.twitter.com/yBmn6Cm4La

With an injured Gerard Piqué, an unreliable Samuel Umtiti, and an underperforming Clement Lenglet, Koeman had to search the depths of the subsidiary for alternative options throughout the season. His own scouting into the youth ranks enabled him to rely on Oscar Mingueza throughout the season, who has been an invaluable addition to the team.

Nevertheless, the Dutchman has barely had the conditions he saw fit to create success. With many of the frailties in defence coming from individual errors and unavailability of options, Koeman could surely do much better with a world-class centre-back in his squad.

Koeman has also had to make do without a quality striker in his roster for the whole season. Even with all these inhibitions, the Dutchman managed to win the club its first piece of silverware in over 700 days.

Even considering all the good work that the former Everton manager carried out in his time in charge at Barça, it is difficult to envision him getting the backing from Laporta with a long-term project. Naturally, the president has gone to the market in hopes of securing a coach come next season. Amongst his options, Xavi has been repeatedly mentioned in several contexts.

However, reports from Cadena SER outline that Laporta does not feel entirely confident in Xavi’s abilities as a manager. The 41-year-old has only just turned into a manager, two years into his first tenure at Al Sadd; a club which is competing at a much lower level than the demands that Barça would require.

No doubt the Catalonian has achieved great things at Al Sadd. However, it is difficult to predict whether he will be able to bring the same level of coaching at Barça, while dealing with a much higher level of stress, competition, and responsibilities than he is currently tasked within Qatar.

There is certainly reluctance from Laporta to trust Xavi instantly, but the president is strapped for options and cash. He understands that acquiring a world-class coach will cost tremendous money — a luxury that the Blaugranas simply cannot afford given their woeful financial condition.

Whatever options that Laporta and his board are left with, they will be best equipped to evaluate with the utmost care for the club’s sporting project. Factors such as Koeman’s great work thus far must not be forgotten, while his limitations as a tactician are equally crucial when posed with the question of keeping the Dutchman or not.

Truth be told, Koeman is simply not at the perfectionist standard required of a coach at Barça, who must come in and respect the several philosophies that construct its playing style.

If razor-sharp attention to details isn’t paid to possession, pressing, and positioning by a Barça coach, it is likely that he will suffer more than he will succeed; even given Koeman’s successes in his first season here, the general sensations outline a higher amount of suffering than success throughout the 2020/21 campaign. At which point, the picture starts to become clearer and clearer: Ronald Koeman’s time at the Camp Nou is over.