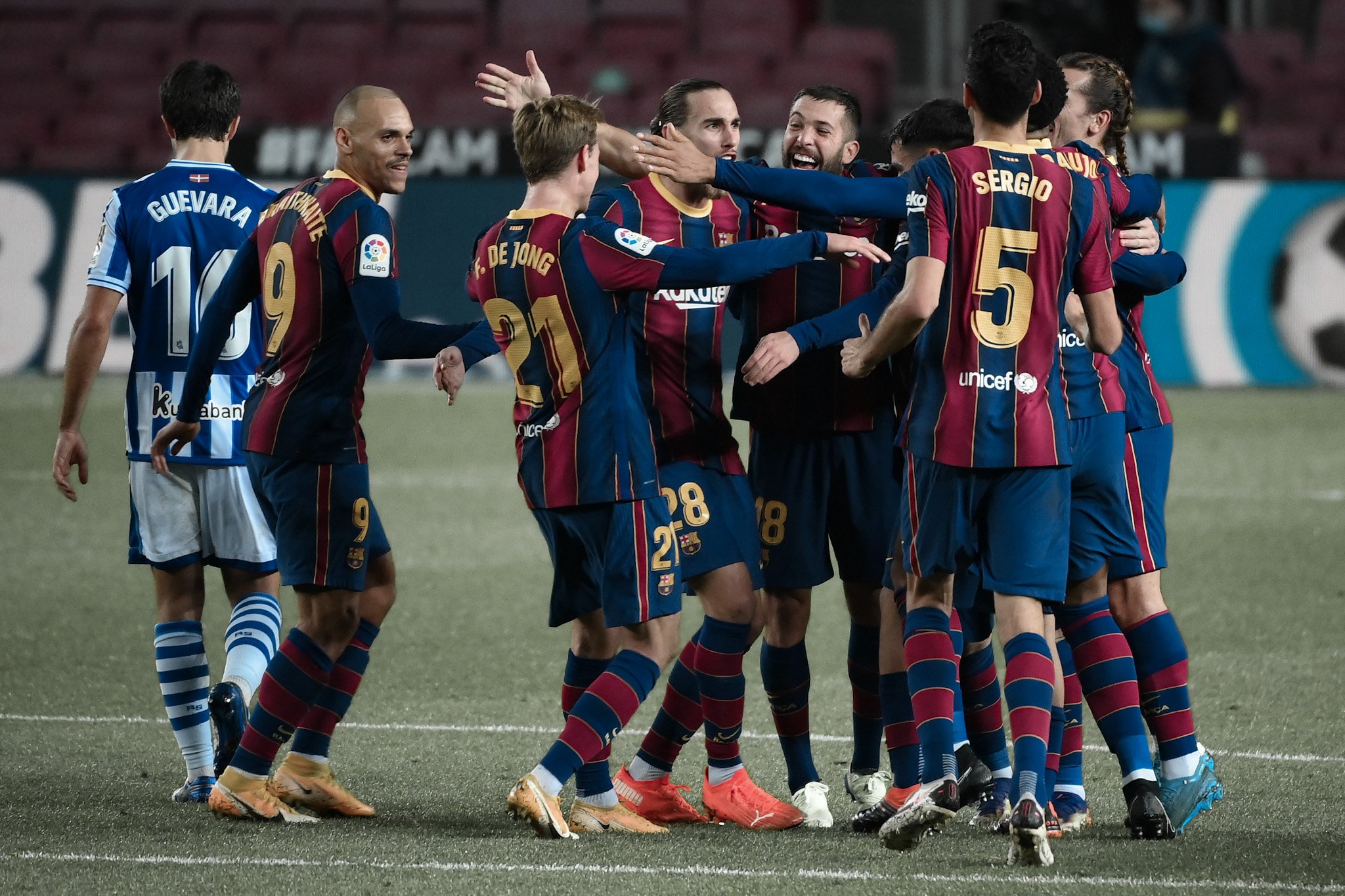 Barcelona managed to scrape out an absolutely vital 2-1 victory over ‘La Real’ at home on Wednesday. With the margin for error starkly decreasing, the home side had to make sure things didn’t slip further this La Liga campaign. They managed to do just that, securing the 3 points against second placed Real Sociedad.

As has been the case very often, there are no more walkovers for Barça. They had to suffer and for the first time this season, managed to overcome a goal deficit to eventually grab the win. Real Sociedad have been flying of late and had multiple opportunities to hurt Barça’s title ambitions even further. The win sees the Catalans move up to fifth in the table with a game in hand over fourth-placed Villarreal.

The German was on top form between the sticks last night. Ter Stegen was immaculate with the ball and showed why his distribution is up there with the world’s best keepers. He took every chance to try and release the runners with his long passes. Barça’s number one showed just how big of an asset a keeper who can help out with the first phase of attack can be with his composure.

Ter Stegen also made some high quality saves to boot, including a great double save in the dying embers of the game to deny Willian Jose and then Alexander Isak. His work in goal was instrumental to the victory. Reliable as ever.

The American has been one of the brightest sparks of Barcelona’s shaky season so far. Yesterday, he once again showed how valuable an intelligent fullback is to a club like Barça. The 20-year-old was a constant menace down the right, bombing up the flank to provide overlapping support. He was an absolute nightmare for Nacho Monreal to deal with.

Dest constantly made himself available for a pass and was also solid defensively. He tracked back dutifully as he always does and kept whipping in crosses when he found space. It is hard to fault much with his performance barring one nervy moment where he left Monreal free in a dangerous situation which could have led to a goal but he escaped, fortunately.

A mightily impressive showing from the Uruguayan as he was near impassable at the back. Araujo positioned himself incredibly well and was alert throughout the match. The 21-year-old didn’t allow the Real Sociedad attackers any breathing room. He once again made a case for why he should be playing a lot more regularly after his return from injury.

Another fellow La Masia graduate showing just why the youth needs to be trusted a lot more. He was really solid at the back, complementing Araujo perfectly and not allowing the opposition many chances to get past him.

Constantly on his toes, he didn’t take unnecessary risks on the ball as proved by his 91% pass completion rate. On occasions when Oscar has started, Barcelona have conceded only 3 goals and have looked much more solid defensively.

Alba has been one of the biggest benefactors of Ronald Koeman’s new systems. In trademark fashion, he made some great runs into space and always provided a passing option with long passes and switches. The left-back was instrumental in both goals as he scored the equaliser with a thumping finish on his weak foot, followed up by an assist for Frenkie de Jong’s winner. Another great display from the Spaniard.

The teenager is quickly showing why he’s among the best signings by the club in recent years. Undisputedly the man of the match. His work rate off the ball was exemplary and he was a constant menace to the opposition. Pedri covered every blade of grass pursuing each ball relentlessly. He also made an incredible tackle in the box to thwart Isak late on in the game.

He was unfortunate to not come away with an assist after setting up a wonderful chance for Martin Braithwaite. Pedri had to be taken off in the final few minutes after his nasty collision with the post while blocking Isak’s shot but he left nothing out on the field. A sensational showing from the 18-year-old.

By far one of the best performances from the veteran midfielder so far this season. Busquets has been nervy and under heavy scrutiny for his recent form but showed up yesterday when the team needed him. He dictated the midfield tempo almost flawlessly and even made a wonderful challenge that led to a goalscoring opportunity. He had Mikel Merino’s number all night long, not allowing the number eight any room to showcase his ability.

De Jong is another player who has been the subject of constant criticism of late. Be it due to underutilization as a pivot or his own personal shortcomings, he is finally looking like he will turn things around. Playing the number eight role seemingly freed him and allowed him to complement his fellow midfielders and attackers with his spatial awareness.

The Dutchman was impeccable in the first half, didn’t put a foot wrong and oozed energy reminiscent of his Ajax days. A brilliant run into the box earned him his first goal of the season, which would consequently turn out to be the all-important winner.

Griezmann showed that he is steadily starting to feel more comfortable with his Barça teammates. He linked up very well with the rest of the frontline and showed great movement. The Frenchman did miss an easy chance but the ball did deflect before falling to him. He was denied by the bar shortly after the equalizer as he nicked the ball off Zubeldia before lashing a shot from a tight angle. Overall not a highly remarkable display but still positive. He was unfortunate not to have notched a goal at the very least.

As is the case nearly all the time, Messi was at the helm of much of Barça’s attacking intent. He kept things ticking and had an immense first half. The diminutive Argentine dropped off slightly in the second half but still ran the show impressively. He also showed tremendous energy out of possession as he made 3 successful tackles, more than anyone else on the pitch.

Ronald Koeman asked a lot of the Dane after starting him on the left flank. But given the lack of available wingers the decision was a good one. Braithwaite impressed in a position that he is not at all accustomed to, making constant runs to draw defenders out of position. His work rate was exemplary as always, chasing down every loose ball, every pass or going into every 50/50 with full conviction. Found himself in a great position to score but sadly missed a great opportunity after Pedri’s setup.