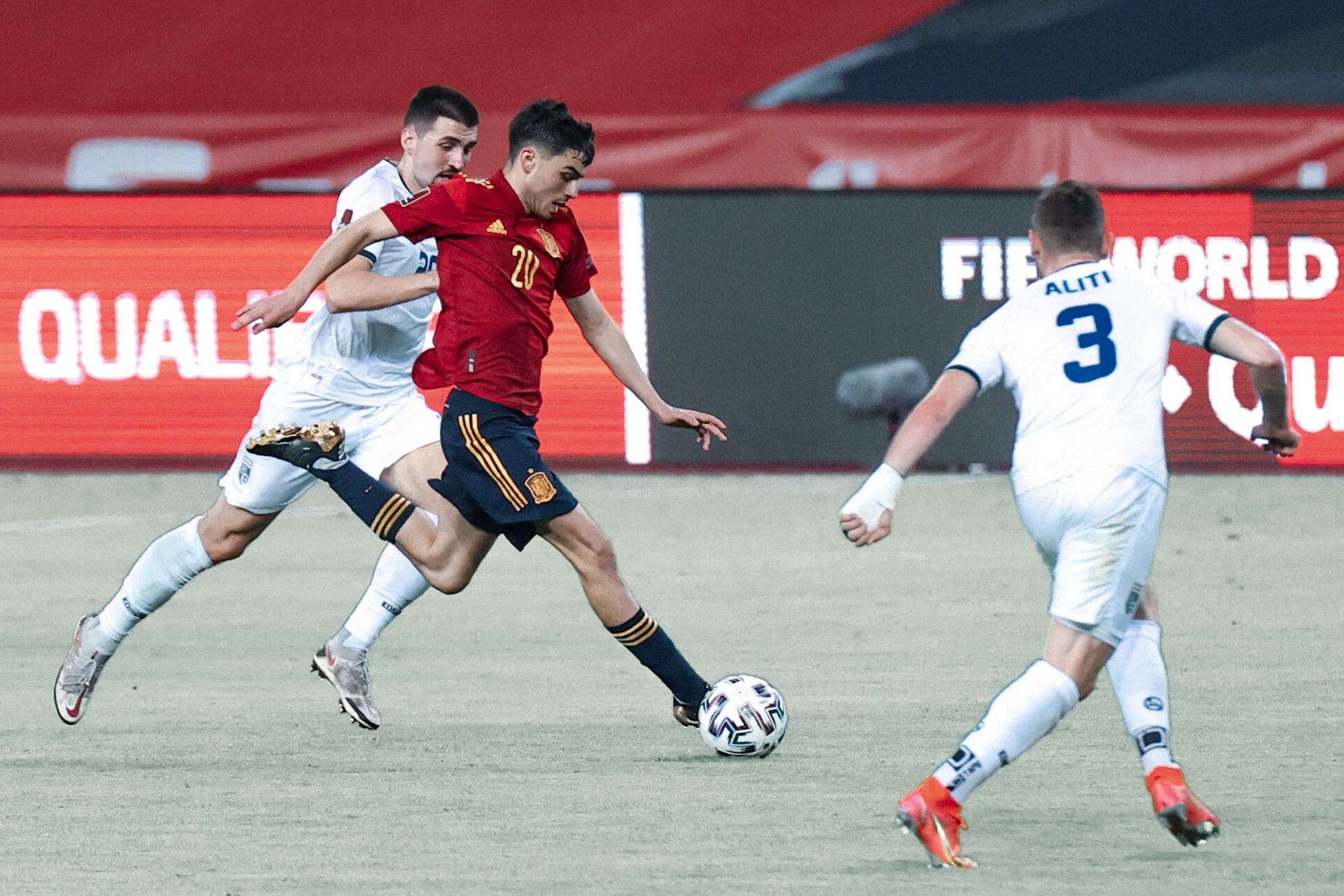 International breaks are often despised by the fans. Though there are many reasons to this, the aptest example at the moment would be the one facing Bayern Munich fans. Their talisman, their top scorer, their best player Robert Lewandowski got injured playing against Andorra, a team ranked 151st in the world by FIFA. The Polish striker will now miss a match against RB Leipzig as well as both legs in the Bavarian’s Champions League tie against Paris Saint-Germain. International breaks are usually regarded as a nuisance. However, the current one has given Culés every reason to be happy.

Of the 14 players called up, eight had at least one goal contribution. A total of 14 goal contributions. This small hiatus from club football has been fruitful. Out of all these players, few have had an international break as productive as that of Pedri and Sergio Busquets’ have had with Spain.

Against Kosovo, both of them were at the top of their game. Though Jordi Alba got an assist, and it was a good performance from him, it was unfortunately not as much of a masterclass as it was for these two midfielders.

Following Spain’s 1-2 victory over Georgia, a few conclusions could be drawn. One was less of a conclusion. More of a fact that was just solidified yet again; once you put Pedri in the starting XI, you weren’t getting him out.

Luis Enrique yet again started 18-year-old Pedri Gonzalez in Spain’s midfield against Kosovo. In Spain’s 4-3-3, Pedri occupied the left interior position. A performance overflowing with confidence and personality, displaying both maturity and inventiveness.

In the 70 minutes that he played, the Spaniard got an assist. In all honesty, he could have gotten yet another assist if not for Ferran Torres’ shot being saved. However, what makes Pedri special is how he manages to stand out even without necessarily playing a direct part in the goals. It’s his simple style of play, his composure, his positioning, everything combined to make him a player who looks like he has been playing at this level for a decade.

Spain were clearly the dominant side yesterday. Not only statistically, but even on the field from what we could see. 918 passes to Kosovo’s 216, Luis Enrique’s side had 80.9% of the possession according to Whoscored. Out of 58 passes attempted, Pedri completed 49 leading to a completion rate of more than 90%. He was reliable in possession, as usual. Shielding the ball well with his body, even against larger opponents playing physically he has no problems.

This is partly due to his shielding, but also due to the fact that the opposition gets nowhere close to him when he has the ball. Receiving the ball, Pedri doesn’t always need to look up as we have seen. He is aware of his teammates’ positions in order to play quick passes to them. The similar was apparent yesterday, but when he did look up, his decision making would take center-stage.

Just because a player is open does not mean he is necessarily a good passing option. Kosovo are managed by Bernard Challandes, an admirer of total football, so much so that he bought an Ajax pennant to place on his car as a youngster. His team was tactically very smart. They would allow the interiors to receive the balls behind the lines after which multiple players would immediately press him.

Pedri was clearly aware of this. He would drop besides Sergio Busquets to receive the ball at times, and so would Koke. The interiors dropping back would allow the pivot, Sergio Busquets, either a simple pass to them or one to the wings to bypass the pressing trap. Pedri would scan the field well and though he saw Koke or Alvaro Morata open to receive many times, he would gauge the situation before pulling the trigger on the pass.

This decision-making when passing was one of the highlights of Pedri’s performance. The right passes with the right timing and with the right weight applied on them.

At the bottom of midfield in a 4-3-3 lies the pivot. A position that requires the highest levels of awareness, intelligence, decision-making and timing both in and out of possession. In short, a position tailor-made for Sergio Busquets.

The Octopus of Badia, he’s one of the players we will miss most when gone. To encapsulate Busquets’ performance yesterday, one can take a look at the times when the teams were contesting for the second-ball. Technically inferior to Spain, these were occasions for Challandes’ team to dominate Spain physically and play their forwards through on goal.

The teams would scramble and fight to get the second or third ball, the Kosovan players would come charging like a torrent onto la roja. Spain would know where to get the ball to next. Amidst the chaos, they would somehow get the ball to Busquets. A second later, the ball would be past the Kosovan players, past the torrent restoring tranquillity. Having been caught off-balance and the very laws of physics, along with their momentum, against them, the Kosovans could do nothing.

Sergio Busquets had one of his best games of the season yesterday. Deputizing at the base of midfield, he would be the first player the defenders would look to get the ball to. Possession through build-up at the heart of the team, Busquets at the heart of the build-up, he was indispensable. Through optimal positioning, he was always a passing option for his teammates leading to him having 7.5% of the team’s possession. However, his strongest asset yesterday? Line-breaking passes.

By playing the perfect line-breaking pass to his Spanish teammates, the veteran midfielder would make it look as if Spain had way more space than they actually did. Despite the risky nature of these passes, a 94% success rate with 87 passes attempted is very impressive. Out of the eight long-balls attempted, he completed seven. Busquets also had four key passes, the joint-most with three other Spain players.

Kosovo would often look to launch balls forward and attempt to win aerial duels. Yesterday, Busquets had to step in often in these situations. Though not very dominant with a 43% success rate, he attempted 14 aerials duels. On the ground, however, he was unbeatable. Four tackles attempted; four tackles won. What made these yet more impressive was the timing. Most, if not all tackles and duels were such that they stopped the opposition’s counter-attacks.

To sum it up, Serio Busquets, Jordi Alba, and Pedri have essentially cemented their spot for Spain in the Euros. All three Barcelona players have shown to play at a very high level in these past few matches. This form carried over to the club’s matches presents a big reason to be optimistic for the fans.