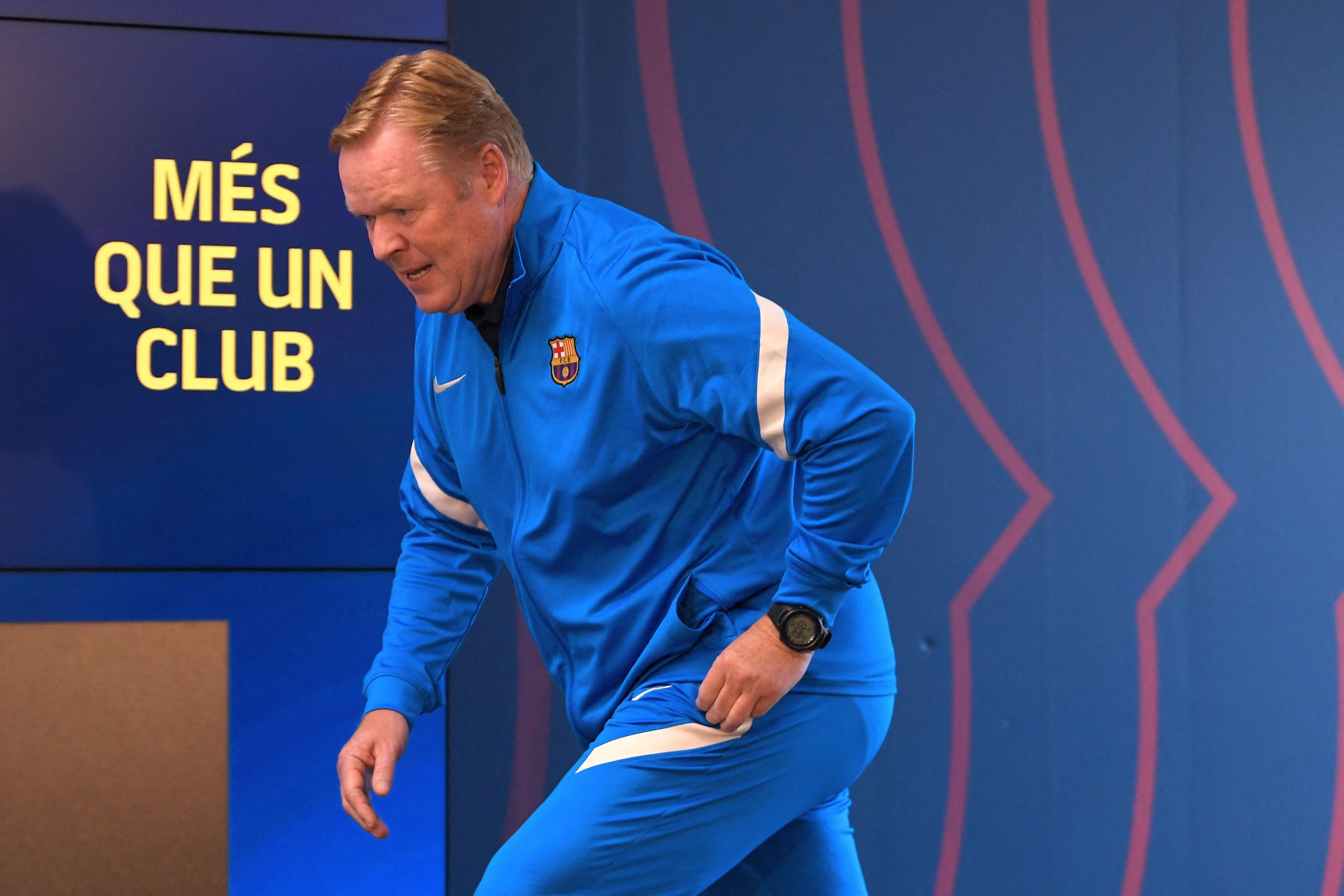 Ronald Koeman is a legendary figure at Barcelona for everything he achieved as a player at the club. However, the Dutchman could not achieve the same level of success as a manager at the Catalan outfit.

Having taken over from Quique Setien in 2020, Koeman did lead Barça to the Copa del Rey title. However, a poor start to the last season eventually saw him getting the sack, with Xavi Hernandez taking over the reins.

While Koeman’s stint ended on a sorry note, the Dutchman will be remembered as the manager who gave a chance to youngsters like Pedri and Gavi in the Barcelona first-team setup – players who have now grown into two of the topmost young midfielders in the game.

Koeman recently sat down for an interview with MARCA, during which the former Barcelona manager discussed the rise of Pedri and Gavi, along with various other topics like his compatriot Frenkie de Jong and the exit of Lionel Messi.

Talking about the growth of Pedri and Gavi at the club and international level, Koeman said: “In my time at Barça there were some very good young players. In the beginning, they also surprised me. Pedri was 17 at the time and Gavi was 16 and they quickly proved to be great talents.

“And with time and the experience of playing at the highest level, they have become undisputed at Barça and in the national team. We have to recognise that they have had Luis Enrique who has played them from the beginning. This has to be highlighted.”

Koeman then highlighted that backing young talent is a tradition that has been long followed in his homeland, as well as at Barcelona, while stating that it was not a tough decision for him to thrust Pedri and Gavi into the senior setup.

“It’s a very Dutch philosophy. In my country we are used to it. Because of the level of our championship, we give opportunities to talented young people to get experience. Also at Barça, when there have been good youngsters, they have been given opportunities,” he added.

“But it always depends on the coach. In my case, with Pedri and Gavi it wasn’t something very special either because they soon showed that they had to be left in the team and keep giving them more opportunities.”

“You have to be brave, but in my case it’s not like that. If you have doubts, but this is the same for a youngster or a veteran, don’t do it. I didn’t have any doubts about Pedri when I started his first game against Real Madrid. And with others like Gavi, Balde, or Nico the same thing happened,” he added.

The Dutchman then insisted that the sky was the limit for Pedri, saying: “He can go very far. He can have a career like Iniesta. If at 19 he is already playing at this level, in a while he will be a more experienced player and one of the best midfielders in the world.”

Further hailing the 20-year-old’s composure and maturity, Koeman added: “That’s his style. He’s not a player who gets nervous. He knows what his quality is. And he seems to make everything very easy. He plays well with both legs and with the vision he has, he’s very quick with his passes and controls, like Xavi and Iniesta used to be.”

Opening up on Gavi’s style of play, the former Barcelona manager said: “Gavi is more aggressive, but this is one of the qualities of a player. I hope that with time he will continue to improve and play more high-level games. Spain has a great future with such young players.”

The chat then moved to Pedri and Gavi’s Barcelona midfield partner Frenkie de Jong and his importance to the Netherlands national team at the World Cup.

“He knows he has to improve. He is a key player for the national team and with the games and stronger opponents we will see the Frenkie we know,” Koeman stated.

The former Everton boss then spoke about the 25-year-old’s situation in the summer when Barcelona tried hard to sell him, praising the midfielder for how he handled the entire episode.

“Since last summer, Frenkie has dominated the situation. He has always been calm, he has never said anything about whether Barcelona wanted to sell him or not. He has been focused on his football. Over time he has become a starter,” he said.

“He is a player of the future for Barcelona. And you never have to sell your best players like Frenkie is. I’m sure he didn’t like the situation he was in, but we haven’t seen a different player either. He has always respected the club and has given his best.”

Koeman then discussed his time at Barcelona, stating that it was a good experience for him despite the way things ended. The Dutchman seemed to point the fingers at president Joan Laporta’s lack of faith in him for his departure, saying:

“The experience was good. As a coach, you learn every day and I learned. It was a complicated period because of the situation the club was going through. I did my things and I was always honest in the decisions I made as a coach.

“Then another president came along and I wasn’t one of his people…. I don’t want to criticise people again either.”

“I did things for the good of the club and nothing else. But with the change of president the situation changed. Any coach needs the full backing of the board, not with doubts. In my case there were doubts and that is not good because it is impossible to work as a coach like that,” he added.

The Dutchman also discussed how the club handled his dismissal as manager, informing him of the decision while on a plane, and insisted things could have been dealt with in a better manner.

“That’s true. I think so too. But it can’t be changed. I have always said that things could have been done differently,” he said.

At the start of the last season, Koeman saw his best player, Lionel Messi, leave Barcelona as a free agent as the club could not renew his contract. Soon after, another star forward, Antoine Griezmann, also departed to join Atletico Madrid on loan.

Barça had brought in Memphis Depay and Sergio Aguero to reinforce the backline, but the latter was going through an injury ordeal. And on the deadline day, following Griezmann’s exit, the Blaugrana decided to sign Luuk de Jong from Sevilla – a transfer that split opinion among fans.

When asked how did he allow that to happen, Koeman simply said, the club did not have any money at that point.

“There was no money. We signed De Jong at the last minute of the market. I had been in contact with him two weeks before in case there was a move and seeing that he wasn’t playing much at Sevilla,” he stated.

“First Messi happened to us, which was absolutely horrible for everyone, and then Griezmann. The only option was De Jong. But Luuk didn’t come to play as a starter, he came to help if the team needed him or in some tight games we needed a header.

“And I was criticised for that. During the time he was there he showed his quality and the public applauded him a lot for the points he won for Barça in the championship.”

Opening up further about Messi’s shock exit, Koeman added: “Until the last moment I thought Messi would stay. When I saw that in the end he was leaving, I was as upset as everyone else.

“You lose the best player in the world and, therefore, you put a cross on the minimum 35 goals he scored per season? And then go out and get them, it was very difficult.”

When asked how he sees the current Barcelona team doing under Xavi, Koeman said: “They are playing well. They have a strong team. The championship is going to be decided between Barça and Madrid because there is no third team that can compete for it. They have a strong squad with a strong bench.”

On the club’s elimination from the UEFA Champions League from the group stages for a second consecutive season, the Dutchman said:

“The Champions League is a very strong competition that doesn’t forgive you. And if you do that, someone else comes along and overtakes you. That’s what happened to Barça.”

When asked if the youngsters were laying the foundation for the bright future at Barcelona, Koeman insisted that experienced, established players like Robert Lewandowski are also needed for the club to achieve success.

“A strong team needs stars that make a difference. Lewandowski does it because of his effectiveness and his professionalism that I perceive from the outside. These figures are important to win something big and the team has to improve to be at the Champions League level,” he said.