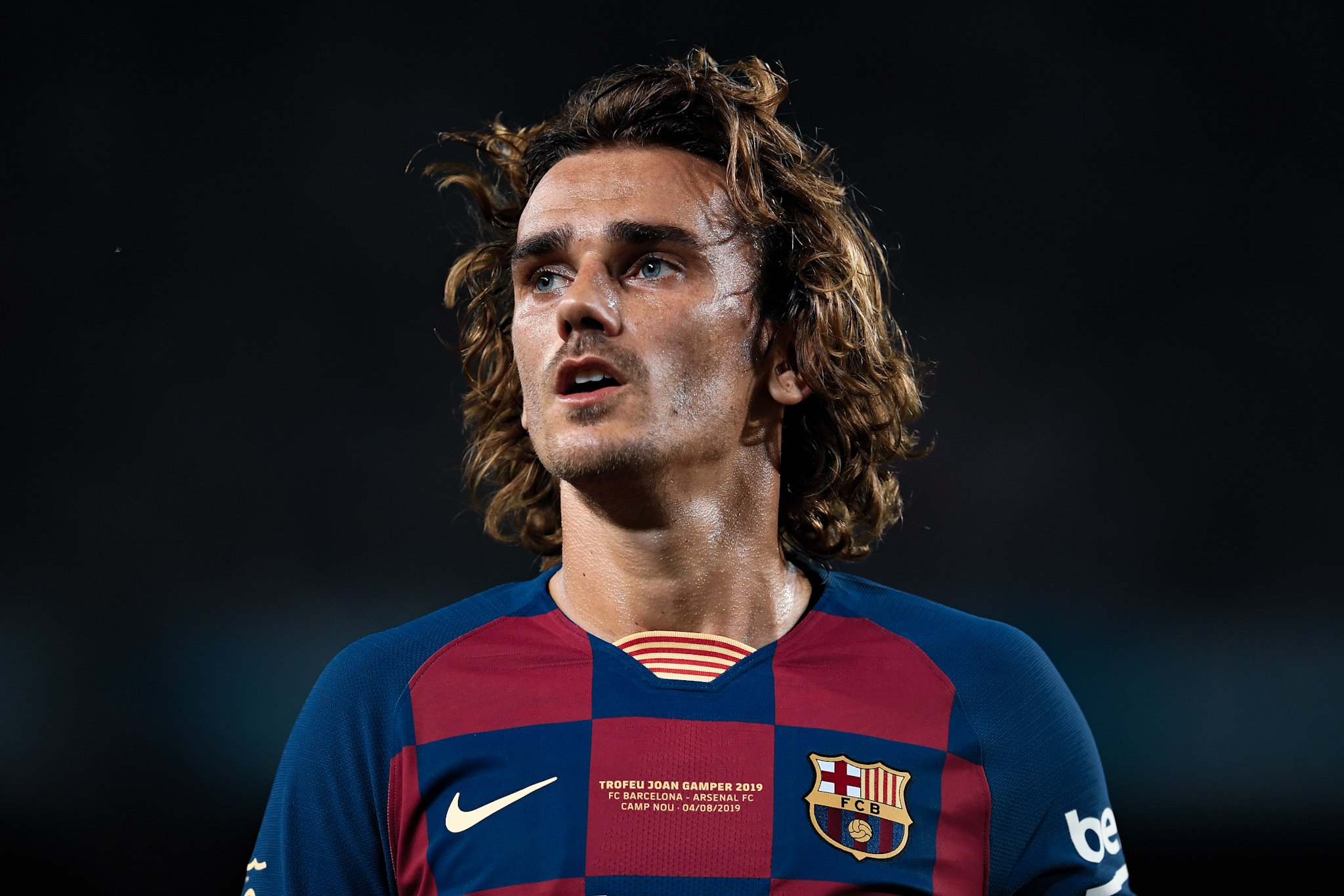 Barcelona have been embedded with multiple problems, intricacies, and riddles, which have little to no answers. This includes the upcoming presidential elections, financial trouble, the Lionel Messi transfer saga of course, injury concern, and tactical ineptness to name a few. However, another name that tops this chart is one surrounding Antoine Griezmann.

Griezmann’s arrival at Barcelona was always a huge cause of concern. The Frenchman, who was coming on the back of a Europa League title, decided to announce his decision to not leave Atletico Madrid via a video announcement even though he was heavily linked to Barcelona. So much so, he even used Gerard Pique’s company do so.

Apart from the fact that the World Cup winner had no place in the hearts of Barcelona fans, there was serious disquietude about how he would fit into the starting XI. No-one quite understood how Griezmann and Lionel Messi could co-exist in the same team. Regardless, the transfer went through in July 2019, and 16 months later, the 29-year-old is at the helm of all tactical trouble at Barcelona, and has finally broken his silence, in quite some fashion, as well.

“Since my arrival at Barcelona, I have not spoken. I said at the time that I only want to speak on the pitch, not publicly. I have been putting up with many different comments, and now I’ve said enough is enough. It is time to put things right.”

Griezmann was, and probably still is, a fantastic player, but his concern at the club stretch beyond the tactical sphere. Firstly, during his tenure at Atletico, he slowly shifted from the wings to a more central role where he was deployed as a second striker in a 4-4-2 system. He would run the channels, allow the rest of the attack to play off him, all while being the primary goalscoring threat.

Controversy does not leave Griezmann off the field either, with his uncle dissing Lionel Messi, saying that the captain spews a reign of terror at the club. Incidentally, or coincidently, that somehow translated to Griezmann and Messi’s partnership on the pitch, with the two exchanging just three passes with each other.

“It is true that what’s been said may generate doubts in the relationship with Leo, but I think he knows very well that I have a lot of respect for him. I see him as a great example, and I think Leo knows it.”

Griezmann, much like many other players was victim of criticism and hate that expanded beyond the pitch, onto his personal decision and life. One such example is his hair. Often, Culés saw it as a bad omen, blaming his long hair for his poor performances, directing unwarranted hate at him. Griezmann made sure to talk about this as well.

“I will keep my hair long even if they ask me to cut it. My children and my wife want me to keep it.”

Griezmann talked about his start to life in Atletico, and how it was far from ideal, because the team has just won La Liga, and each training session was like a game in the Spanish capital. However, his decision to make the documentary, La Decision while at the club hurt his reputation around the country.

“La Decision? My parents were angry about the documentary. They did not like me doing it like that, and they also wanted to see me at Barça.”

He continued on the same topic, “I decided to stay at the time. Everyone gave me their opinion and then I decided. Everytime someone spoke, I had doubts.”

Two years since making the documentary, Griezmann’s words do not exactly sound regretful, as he defends his decision to make it by saying, “In the documentary I wanted to show that choosing a team is not like going to a candy store and choosing the red or the blue.”

That said, Griezmann speaks about how his decision to stay eventually ended up costing Barcelona. He isolates Messi this instance, and says how the captain was hurt that he did not join earlier.

“I spoke with Leo when I arrived, and he told me that when I rejected the offer it screwed him up and it hurt him, because he had made public comments. But well, now I was on his side, he told me that he was with me.”

Finally, Griezmann moves on to his performances on the pitch, and the fact that he should get more time at the club to adapt. Why? In his own words:

“I have undergone three coaches and a global pandemic. I still need time to adapt. There have been comments from everyone, even the candidates for the presidency.”

“Criticism? I accept it, because I know we are not seeing the best Griezmann.”

With that, he makes a flashback trip to his time under Quique Setien and Ernesto Valverde. He did not particularly enjoy a great time under either of time — the former benched him for entire duration of matches, while the latter played him out of position on the wing to make space for Luis Suarez.

“My relationship with Setien was normal. I learnt how to shoot better and pass better under him. My family sometimes told me to ask him why I didn’t play at times.”

He built on that line, saying jokingly, “When I played five minutes against Atletico, he wanted to talk to me and I told him that he didn’t have to. He asked me until when I would be angry? I still am.”

“Valverde asked me to play on the left and use spaces. Sometimes to go inside, but especially to be with Jordi Alba when going into space. He is the one who brought me and I have a lot of respect for him. I gained his confidence.”

Griezmann then moved to a topic of great concern, the saga surrounding his uncle/ex-agent, and his statements about Messi. The Frenchman did not hesitate in confessing that he did not have any connection to him.

“With Eric Olhats (former agent) I no longer have a relationship.”

“My uncle doesn’t know anything about football. A journalist comes, he is with you to get a filthy quote out of you…I told Leo that I have nothing to do with them. I don’t even have my uncle’s WhatsApp.”

Barcelona players’ are synonymous with media controversy, starting with the TV3 scandal when the board paid media outlets to spread discouraging rumours about the players, especially the seasoned veterans. Griezmann, too, spoke about how the media helps in spreading the fire every now and then.

“With the media there is always something wrong. If it’s not with Leo, it’s that I want to leave or that I want to go in January because they want to sell me. It’s waking up every day and going to see if there’s something terrible.”

One of the biggest takeaways from this interview is that Messi and Griezmann enjoy quite the relationship. (Photo via Imago)

Eventually, the topic is led on to the current season, and how he and the club will row through a very congested schedule and a global pandemic.

“I have the confidence of the coach.”

“It has been difficult at the club for two years. But there are many games to play and I think we have the level to win important titles, but we have to respond and it is my turn to show that I am ready to play for this club.”

“There are many games and players are getting injured. If you get injured you’ll be out for 30 games (laughs). Every three days is too much. You have to play and you have to continue, but it becomes difficult. Having so many injuries is not by chance.”

Barcelona players’ are synonymous with media controversy, starting with the TV3 scandal when the board paid media outlets to spread discouraging rumours about the players, especially the seasoned veterans. Griezmann, too, spoke about how the media helps in spreading the fire every now and then.

The interview concluded on an emotional note for Griezmann, who spoke about how his involvement with the squad on the pitch has been far from ideal, but how he needs more time to adapt, which is fair, since he is finally playing in his position for the first time in this Barcelona tenure.

“I need a little help from everyone, from fans, from the club. I already have the help of my teammates. Journalists need to be softer with me, and not hit me so many sticks. They need to leave me a little calm.”

“I am very well here at Barça, they have welcomed me very well. I want to help the team. They trusted me and now I want to reciprocate that trust by helping the team win. There is no problem with anyone, I’m really fine and I just ask you to leave me a bit calm.”

“Hopefully, after this interview, everyone calms down when the subject revolves around me.”

It is no doubt that Griezmann was one of the best players in the world during his time with Atletico, leading the charge for several title races with club and country. He has won several accolades in his time as a footballer, including the extravagant World Cup trophy. However, it was never this easy for him, it never is if you want to be successful.

“Nobody had confidence in my when I was little. I was told that I wouldn’t make it because I was too small and I didn’t have the level. I wasn’t given an opportunity. FC Metz wanted to take me, they sold me dreams. But 2 weeks later it was dead.”

Griezmann has already done a lot to prove Metz, and every other club or person that rejected him, wrong. Now, he has to take the baton at Barcelona, lead from the front for the club during a time of unmatched trouble. Rest assured, we might see a different Antoine Griezmann at the club now.