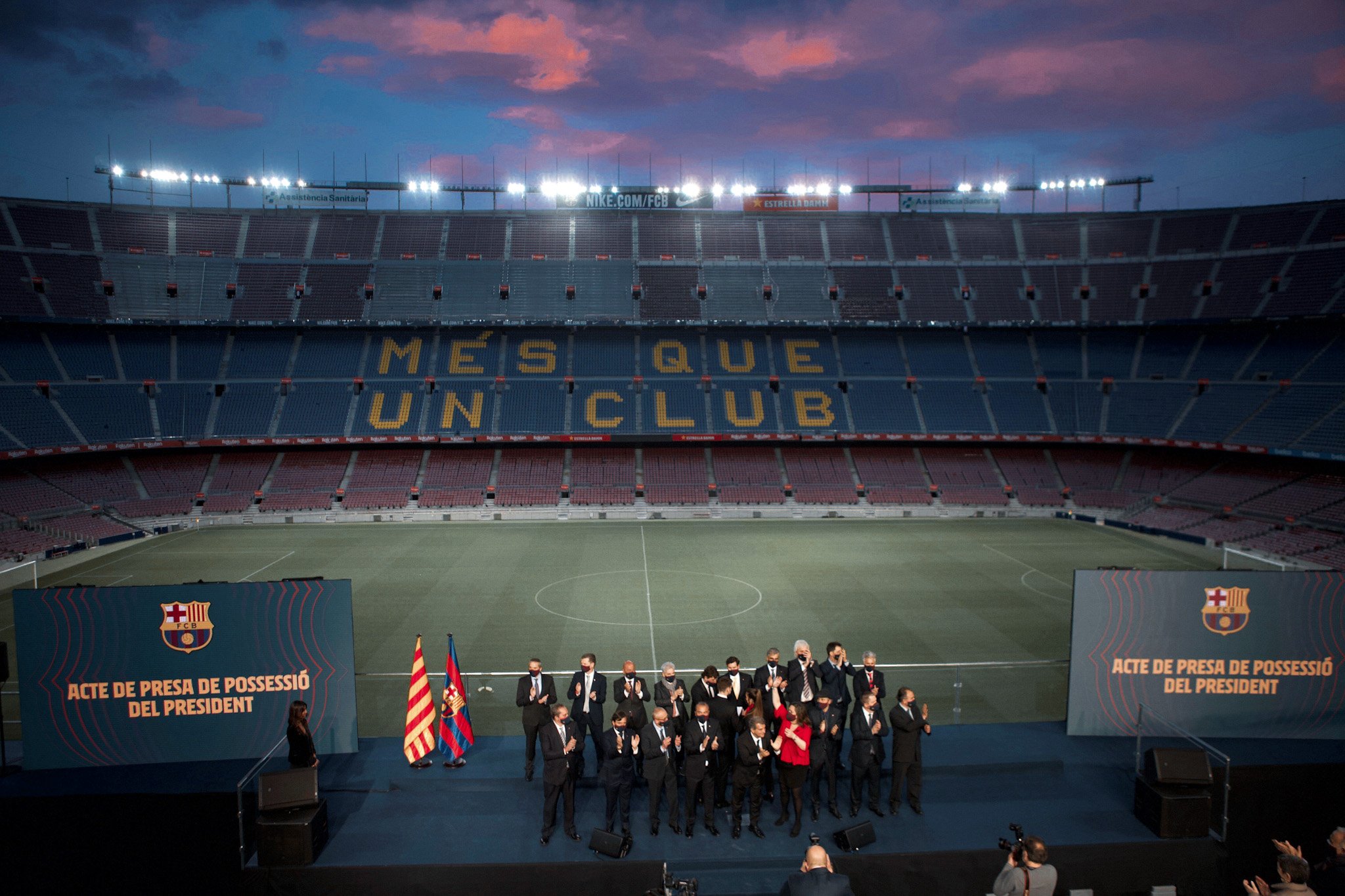 Joan Laporta returned to Camp Nou’s offices two days ago after an emphatic victory in the 2021 FCB Elections. The future plans are currently in full swing now; new reports emerge almost every hour in regards to the contract extension, new signings, and ways to solve the financial crisis.

According to Mundo Deportivo, news the board has five players in their mind who they feel are a must for the future of this club and will make efforts to negotiate a contract that benefits both parties. Barça Universal takes a look at each of the five’s situation in detail.

Oscar Mingueza is a Blaugrana inside out, a part of the La Masia academy since 2007. However, he was not a very important part of the B team when he got a call up for training with the senior squad after injuries to Gerard Pique and Ronald Araujo

Ever since then, the 21-year-old has grown immensely and established himself as one of the regulars in the starting lineup. The Spanish defender’s versatility has been a significant boost to the squad, filling the right-back role when Sergino Dest and Sergi Roberto were injured.

Mingueza’s current contract ends in the summer; however, the board can unilaterally extend his contract for two more years, promoting him to the first team. Mingueza has made 29 appearances for the first team this season, scoring one goal and setting up two more during the period. The board has made it a point to reward the youngster for his sheer hard work and determination. Nothing more than what he deserves.

Similar to Mingueza, Moriba has also been brought up at La Masia. He has been touted to be one of the best midfielders of his generation, even though he is not a typical Barça academy product. The dynamics he brings to the game is something the Dutch manager appreciates the most.

The teenager already has two assists and a goal to his name in just four La Liga appearances. Without any doubt, whatever petite sample size we have seen of Ilaix, he is destined to achieve great things in the future.

The youngster has a contract that runs out in 2022, with a release clause of €100m; considering the talent he possesses, the board must increase his release clause to avoid Thomas Partey-like situations.

Given the fact that the coach and his backroom staff simply love Ilaix, the newly elected board has decided to extend his contract and secure his future at Camp Nou.

Ever since Dani Alves left, Roberto has done well to replace him at the right-back position. There was a time in the Luis Enrique management when Roberto played at least five different roles ranging from a full-back to the right and left interiors. His versatility has been a critical aspect of his game.

While the Spaniard has had an injury-plagued season this time around, from what we have seen from him in the past, it’s sure that he will look to bounce back stronger.

Roberto has a contract that ends in 2022, but it looks like the board will extend the contract of one of the four Barca captains securing his long-term future at Camp Nou.

Due to his injury-stricken career at Barcelona, it has gone rather unnoticed that the Frenchman is into his fourth out of the five-year contract he signed in 2017. his means that if not renewed, his contract will run out next to next summer.

The 23-year-old has finally found his feet at the club and has shown glimpses of the immense talent he possesses. He has perfectly slotted into the new role assigned to him in the newly found 3-5-2 system deployed by the Dutch manager.

Even during his election campaign, the Catalan lawyer made it clear that he is fond of the Frenchman and will prioritize his contract extension.

The last, but obviously not the least name on our list is Lionel Messi. The maestro finally seems happy after the fiasco in the summer, culminating in sending a burofax stating that he wanted to leave to the then Bartomeu administration.

Messi has been in a spectacular run of form since the start of the new calendar year, scoring 17 goals and assisting 6 more in just 18 matches. Throughout the campaign, Laporta insisted that only he could convince Leo to stay, which played a significant role in earning popular support.

After the elections, there seem to be new reports regarding his contract almost every hour. A lot of news is being circulated lately surrounding his future. In his inaugural speech, the president made it clear that he will do everything possible to convince Leo to stay.

It’s only a matter of time before we get to know Leo’s decision regarding his future. Considering the exceptional bond he shares with Laporta and the fact that the team is continuously improving have reportedly significantly increased his chances to stay.