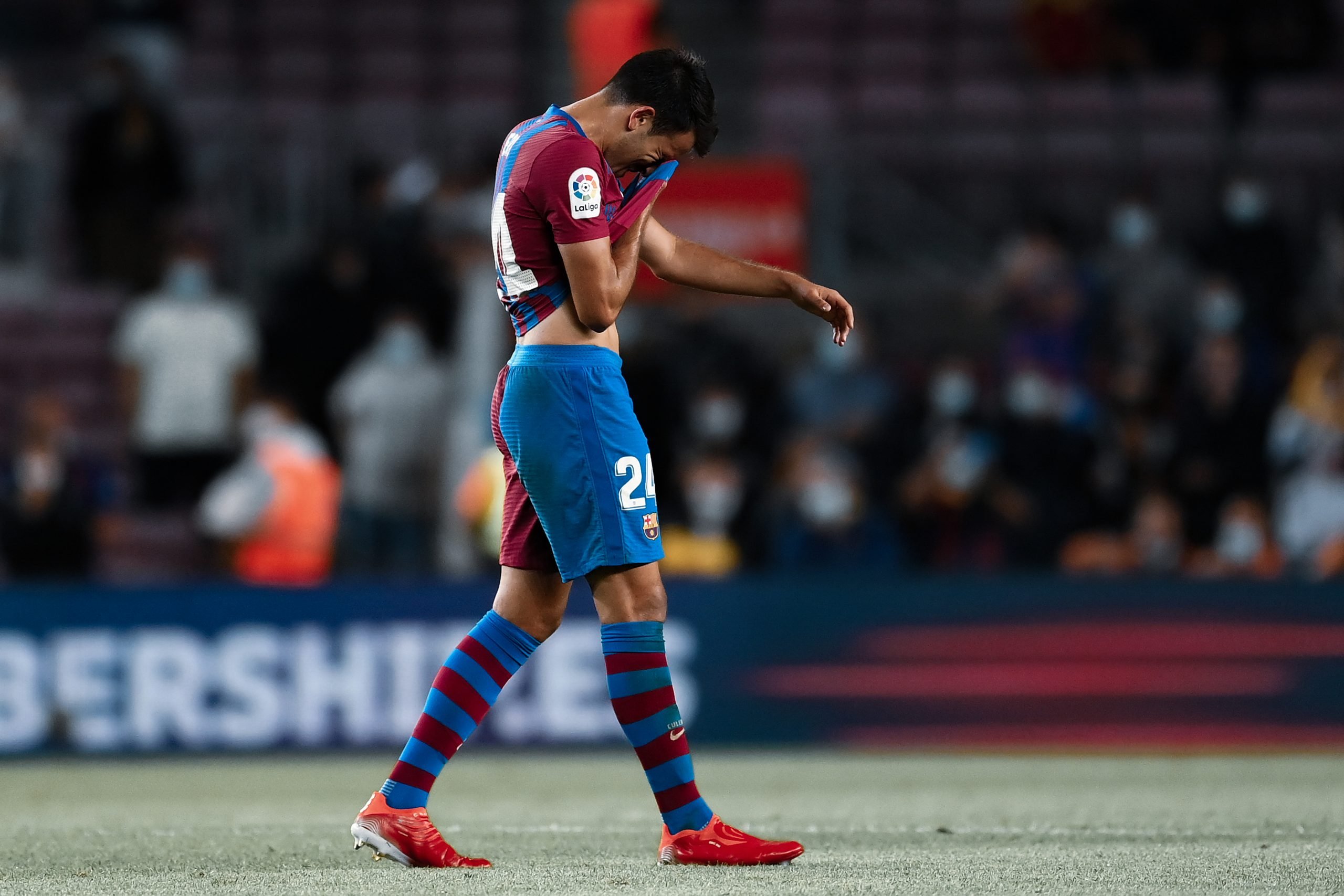 Back when he left La Masia to join Manchester City’s youth ranks, Eric Garcia was already widely considered one of the hottest prospects of Spanish football. While his departure was a hard blow, it did prove to be the correct choice for him. Under the tutelage of Pep Guardiola, there was no doubt he would eventually reach great heights.

Garcia would indeed make it into the Citizens’ highly competitive squad and get valuable game time. With top-class competitors like John Stones, Aymeric Laporte and Rúben Dias, obtaining a starting spot at such a tender age was never a genuine possibility. Nevertheless, he still amassed a decent 35 appearances across three seasons.

2021/22 saw Garcia frustratingly drop to the abyssal end of the bench. While one could attribute a part of that to the hefty competition, Manchester City also didn’t see any long-term prospect in him. That was down to a burning desire pulling him away from England: the yearning for a return to Barcelona.

The 20-year-old’s future was determined long before the expiration of his contract. On the first of June, 2021, Barcelona officially announced that Eric Garcia would rejoin forces with his boyhood club.

In the meantime, he was making waves for the Spanish national team at Euro 2020. Partnered with Aymeric Laporte, he found himself at the core of La Roja’s impressive charge to the semi-final.

That was compelling evidence of the Catalan’s talent and certainly filled Barça fans with hope. However, his start to the 21/22 campaign has not unfolded as planned.

Despite a promising debut against Real Sociedad, Garcia has looked a shadow of his not-so-distant former self. Notably, his performance against Athletic Bilbao in the league, Bayern Munich and Benfica in the Champions League has been disappointing. But what can his early troubles be put down to?

A fascinating and multi-functional profile

That Eric Garcia’s profile was to both Pep Guardiola and Luis Enrique’s liking is no coincidence. Though by no means physically imposing, his tactical and positional acumen make up for his modest 182cm frame.

In a way, the 20-year-old, along with the likes of Pau Torres and Andreas Christensen, represents a cross-section of the positional and proactive defenders, reliant on their early judgment and spacial excellence.

For his age, the discernment that Garcia possesses is quite remarkable. Always well-positioned and aware of his surroundings, his body orientation and spatial occupation permit him to intercept the ball or steer the opponent’s attack in another, less beneficial direction.

He measures his moves exceptionally, only stepping out of position when certain to intervene and initiate a counter-attack.

Additionally, he is a terrific presser, especially in the early phase. There, it is all about proactivity, which Garcia has in abundance. Oriented by the area of the ball and the position of his opponent, his sterling reading of the game allows him to always be on the scene of the action. Following his opponent closely, he masterfully eliminates any options of direct progression.

On the ball, Guardiola’s student is impeccable, too. His constant urge to threaten the opponent with vertical and diagonal passes is underpinned by his nonchalant nature and immaculate ball-playing ability. He is capable of delivering a wide aray of passes, from a ball over the top to the opposite flank to a line-breaker unsettling the heart of the opponent’s defensive structure.

Moreover, Eric Garcia is known for his leadership qualities and mental robustness. His previous managers have praised his composure and unyielding character, and for good reason. The Catalan was the captain in every single one of Barcelona’s youth categories and Manchester City’s u18s, an indicator of his influence in the dressing room.

Yet as with all youngsters, there are some weaknesses that blemish Garcia’s game. Those flaws have surfaced this term and marred an otherwise seemingly promising debut campaign. But what exactly are the aspects that he has to work on?

If the main field of his defensive deficiencies had to be identified, it would be one-on-one situations. We can divide those into the instances where the encounter takes place in open space or enclosure, also depending on the defender’s position relative to the attacker. Unfortunately, the Catalan centre-back struggles in all facets.

In isolation, Garcia is reluctant to close up to his opponent, handing him enough time to plot his next move. Apart from maintaining a small margin with the rival, the defender has to block the option of an outside dribble, a task which the 20-year-old has also failed to complete on numerous occasions. An example of both is Darwin Núñez’s first goal against Barcelona in their appalling 3-0 defeat to Benfica.

Things are no better when dealing with crosses or through balls into the pockets behind the back four. While Garcia’s awareness means he never loses sight of the attacker, his body handling and orientation let him down. Especially against physically dominant attackers like Iñaki Williams, those problems have come to the surface.

Aside from 1v1s, the former Manchester City man’s troubles extend to his distancing with the respective fullback. When attacked from the flank, the centre-back needs to retain a small gap relative to the fullback. That margin is considerable in Garcia’s case.

While those flaws often spoil his game, they are not everlasting. The Catalan is still very young and will inevitably improve as he gains experience. Patience is, in that regard, the recipe for success.

An unforgiving and unhelpful system

While Ronald Araújo and Gerard Piqué have both undoubtedly enjoyed a better season thus far, freezing Eric Garcia out of any first-team action is not a viable solution either. First, it is crucial to determine the extent of the damage that the system, not the individual, inflicts.

Ronald Koeman has shown a lack of adjustability, both in tactical approach and the personnel at his disposal. There are several players at Barça and a at his previous clubs that were compromised by the ex-Oranje manager’s rigid principles. And the former Man City defender is among the latest victims of the coach’s incompetence with regard to man-management.

For example, it would have made much more sense to use Garcia at the heart of the back three, not the wider areas. He would not be isolated centrally and positioning and proactivity carry weight.

This is not to say that Ronald Koeman is totally accountable for his horrid start. Nevertheless, it is clear that with a different manager at the helm, the weaknesses of Garcia and others would have been better camouflaged.

That is precisely why many of the Catalan’s troubles only genuinely arose at Barça. Pep Guardiola and Luis Enrique disguised his flaws while exploiting his most valuable traits.

A positive outlook on the future

In spite of his rough start to the 21/22 season, Eric Garcia remains one of the highest regarded young defenders in the modern game. Arguably, the Catalan is even the centre-back with the highest ceiling in our squad. The competencies that he has already acquired are the hardest to develop, while the majority of his weaknesses will dissipate as he gains experience.

He might not be an accomplished footballer yet, but the future is certainly looking bright. With his competitive and emulous character, there is no doubt that his form will soon pick up. After all, you never know: perhaps we could soon witness Eric Garcia’s resurgence. Patience and belief are fundamental.