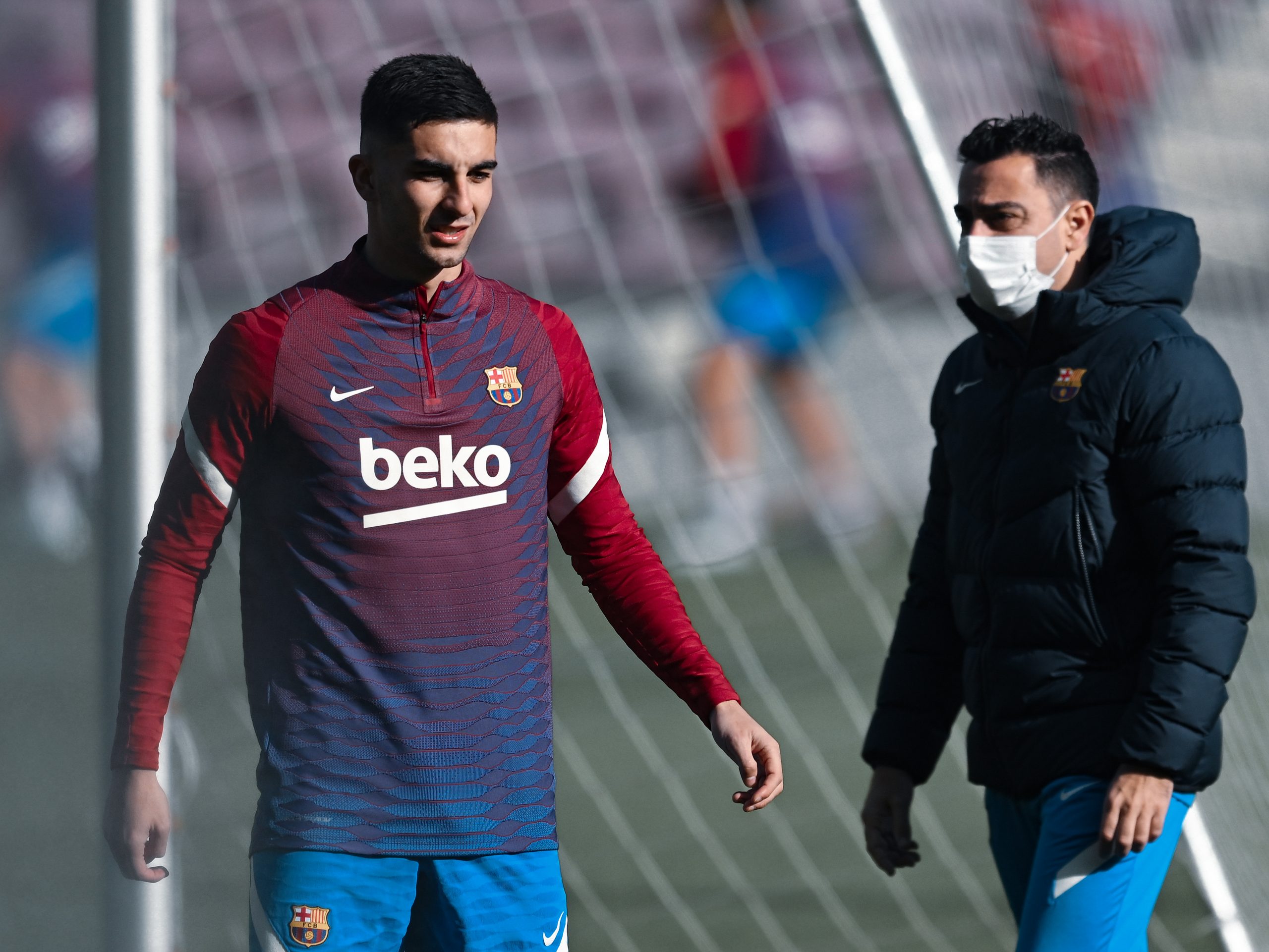 After weeks of dominating the headlines, it seems that Ousmane Dembele’s contractual situation has finally been settled: barring a surprising turn of events, the Frenchman has played his last game for Barcelona.

His departure splits culés, though, after all, he was one of the most divisive players in the squad – a dynamic talent who missed over half of his games for the club due to injury. Most of all, its ramifications on the pitch and on Xavi’s managerial decisions are worth further investigation.

In short, Xavi’s first season at Barcelona just got a whole lot tougher. Dembele was set to be a staple in his long-term plans at right-wing, and regardless of fitness issues, the 24-year old is undoubtedly a talented footballer.

To make matters worse, Ansu Fati, who recently opted out of surgery, will also miss significant time following his recent injury. Now, Xavi must tinker with his lineups and make the most out of a front-line that lacks experience and edge.

In the following article, Barça Universal will look at Xavi’s front-line options, analyse each player’s profiles, and determine various combinations based on tactical preference. Naturally, Dembele will be excluded from the proceedings and taking Fati’s long-term injury into account, we won’t consider him in this list either.

To start, let’s take a close look at each of Blaugrana’s offensive options, analysing their strengths, weaknesses, and what systems they fit in best.

First up is Barcelona’s newest signing, Ferran Torres. The ex-Manchester City forward is, without a doubt, the most versatile player on this list, truly capable of playing any position across the front-line.

On the left, he operates as an inverted winger, cutting inside and playing in the box. On the right, he is a prototypical winger (being right-footed, of course), driving down the flanks and crossing or shooting across the goal. Centrally, he has the natural movement and tendencies of a number 9.

Looking at his last two matches – in which he has a goal and an assist — Torres was a threat from both the left and right flanks. Against Athletic Club in the Copa del Rey, he scored his first goal for the Catalans. Staying on the touchline, he received the ball, laid it off to Gavi in front of him, and moved into the box.

Sergio Busquets found him in with a clever pass, and with the slightest of openings, Torres finessed the ball into the back of the net. It was a goal out of thin air from a player who has shown he is capable of creating magic.

Against Alaves at the weekend, Torres found himself on the right-wing. As the club were desperate for three points, he made a sudden run off his market, got on the end of Jordi Alba’s cross, and laid the ball off to Frenkie de Jong in front of goal.

While both goal contributions highlight different aspects of Torres’ game, his consistent runs into channels and behind the defence have helped open up Barça’s often one-dimensional attacks. Furthermore, this movement allows the team to play with more verticality, directness, and an increased level of unpredictability.

Next, let’s look at Memphis Depay, a player whose fortunes have drastically changed over the last few months. After an impressive start to the 2021/22 campaign where he quite frankly carried Barcelona’s attack, he has since fallen off due to injury and lack of consistency.

From August to October, Depay tallied seven goal contributions; since then, he has three. Still, the Dutchman is the most unique forward in the squad and can fulfil a role that others can’t.

Playing at left-wing or centre-forward, Depay’s tendencies are to drop deep and affect zone 14 or the left half-space. He is a natural “false nine” — the only one in the squad. In addition to being the team leader in goals, he also averages 2.35 key passes a game, showcasing his creativity.

Under Ronald Koeman’s tutelage, a significant area of concern was the overcrowding of the left-hand side, due to Depay, Ansu Fati, and Jordi Alba’s movement. Fortunately, this has changed under Xavi, who has balanced play across both flanks. With the right players around him, Depay could prove vital yet again.

Although he won’t be considered when we explore combinations later on due to injury, Ansu Fati remains one of Barcelona’s most electric forwards. The Spaniard is extremely efficient and effective in front of goal, boasting of a goalscoring instinct that is rare for a 19-year old.

He has all the makings of a modern forward, apt at driving inside from wide positions or sticking to the touchline. Most importantly, he is clinical in the box. Additionally, Fati is keen to play quick one-twos and is improving his anchor play.

Due to his versatility and talent, he could thrive in a number of setups and positions. Unfortunately, he will miss around ten weeks of games due to his latest injury. But once he returns to full fitness, he will be a key cog in Barça’s front-line.

Another Dutchman to analyse is Luuk de Jong.

Flashback to one month ago, many would have expected the 31-year old to be one of the first departures in the winter transfer window. But, after scoring three goals in 2022, he has shown value to Xavi. As he said himself, “I think Xavi was a bit surprised at how I fit into his game.” He has surprised plenty of culés too.

De Jong is an archetypal “target man”, a towering centre-forward who provides a clear focal point in attack. He holds up the ball, distracts central defenders, and is an easy target in the box for headers or an acrobatic finish or two.

After missing almost the entire season thus far due to injury, Xavi can now count on the services of Martin Braithwaite.

The Danish international offers an immense work-rate and is perhaps the best (and most willing) presser on the front line. Courtesy of his versatile profile, Braithwaite play on either wing or as a centre-forward, and that can result in plenty of opportunities.

The 30-year old is, most of all, a decent rotation piece, however, he can be counted upon to make runs behind the defence, something Xavi can exploit.

Last but certainly not least are the two youngsters, Ferran Jutgla and Abde Ezzalzouli. Starting with Jutgla, the Spaniard has thus far impressed with his style of play that is atypical for most La Masia forwards.

Contrary to the several “false nines” that have come through for years on end,  Jutgla is a hard-working player who excels with his off-ball movement, akin to Braithwaite. He can also play wide and make an impact centrally.

In front of goal, he has shown he has the instincts of an off-the-shoulder number 9. Proof of the same is his brace with Barcelona B yesternight as they overturned a two-goal deficit.

Abde, on the other hand, is the player who most closely resembles Dembele in terms of profile (but not ability). Playing on either wing, Abde keeps natural width and loves taking on defenders in duels with tremendous footwork and suave.

The 20-year old averages a squad leading 4.53 successful dribbles per game but still lacks composure in front of goal and the so-called “final pass”.

While this move may or may not happen, it’s worth quickly mentioning Alvaro Morata. Should the Juventus striker join on-loan, he would bring link-up play, an option between the lines, and a knack for runs behind the defence. However, his potential arrival is contingent on other dominoes falling into place.

Looking at Xavi’s options, a few things stand out. First, there may not be eye-catching quality, but there is certainly quantity. Second, and more importantly, there is variety in profiles too — gone are the days of Barcelona’s overabundance of “number 10s”.

With these players and profiles in mind, let’s now look at different combinations (all in a 4-3-3 formation) and when they would be most appropriate.

The first combination is aptly named “pace and space”. This trio emphasizes verticality, dynamism, and directness. Without Fati in the mix for the next two months, at least the players selected here are Ferran Torres, Abde, and Ferran Jutgla.

Once Fati or even Braithwaite get back into shape, either can slot in here for Jutgla. Abde will likely be played on the right, and either Torres or Jutgla can play in the middle and left respectively.

Torres and Jutgla can play extremely direct and are dynamic forwards, while Abde provides an enhanced one-on-one ability. Both Abde and Torres (who is a more adept winger than Jutgla) also bring natural width, thus the “space” aspect of this combination.

This lineup can work against opposition who are not afraid to attack, yet those where Barcelona are still favoured. Real Betis, Real Sociedad, Villarreal are three examples of this.

This assumes chances for counter-attacks, opportunities to craft space on the break, and cutting into the heart of the defence, as all three players thrive in such situations. Against a low-block, this front-three admittedly lacks creativity.

Speaking of low-blocks, Barcelona often find themselves against opposition who prefer to soak up pressure and play on the counter. The club have struggled to break down such opponents – take the last match against Deportivo Alaves, for example.

Some keys to breaking down low-blocks include creating width and stretching out your opponent, chaotic yet precise off-ball movement, and establishing overloads in critical areas. As such, this combination of forwards tries to mix profiles that can help that. The players chosen here are Memphis Depay, Luuk de Jong, and Ferran Torres.

Depay’s inclusion is straightforward: as the most creative player in Barcelona’s front line, he can help find spaces and carve space in stubborn backlines. Furthermore, his movement inside would open up space for Jordi Alba down the left-hand side, and also establish overloads in midfield.

Luuk de Jong’s inclusion may surprise most, but as a target man in the box, he constantly occupies and draws defenders. It goes without saying that he is a threat on the end of crosses.

Torres is the wildcard of the three players here, the one who should be given license to roam both flanks and find spaces in the box to score. With Depay’s passing ability and de Jong’s presence in the box, Torres can thrive.

After considering two somewhat different combinations, let’s look at a “balanced” choice, one that Xavi can confidently employ against most opposition.

This consists of Memphis Depay in the middle, Ferran Torres on the left, and Abde on the right. Each of these forwards has a distinct profile from the others, providing a front line that is balanced versatile, and their styles are complementary too.

Abde is the dribbler and ball carrier, Ferran is the exploiter of space and finisher, and Depay is the creator.

It goes without saying that Xavi should tinker with different lineups, however, this combination could prove highly effective.

While the long-term injury to Ansu Fati and the (inevitable) departure of Ousmane Dembele are admittedly hard-hitting, Xavi can still mix and match various players who are distinct in profiles and styles.

Based on the opposition, there are ample opportunities to take advantage of various combinations. Above all else, with seven players (seven at a stretch) to fit in three positions, there is healthy competition, variety, and the ability to switch things up based on form. Hopefully, this attack can get firing on all cylinders.

As Xavi looks at his squad, he can rest easy knowing he has plenty of options across the front line. In fact, for the first time in years, Barcelona have a healthy mix of profiles; players who are willing to work with and without the ball. Perhaps it’s quantity over quality right now. Perhaps that’s not such a bad thing.