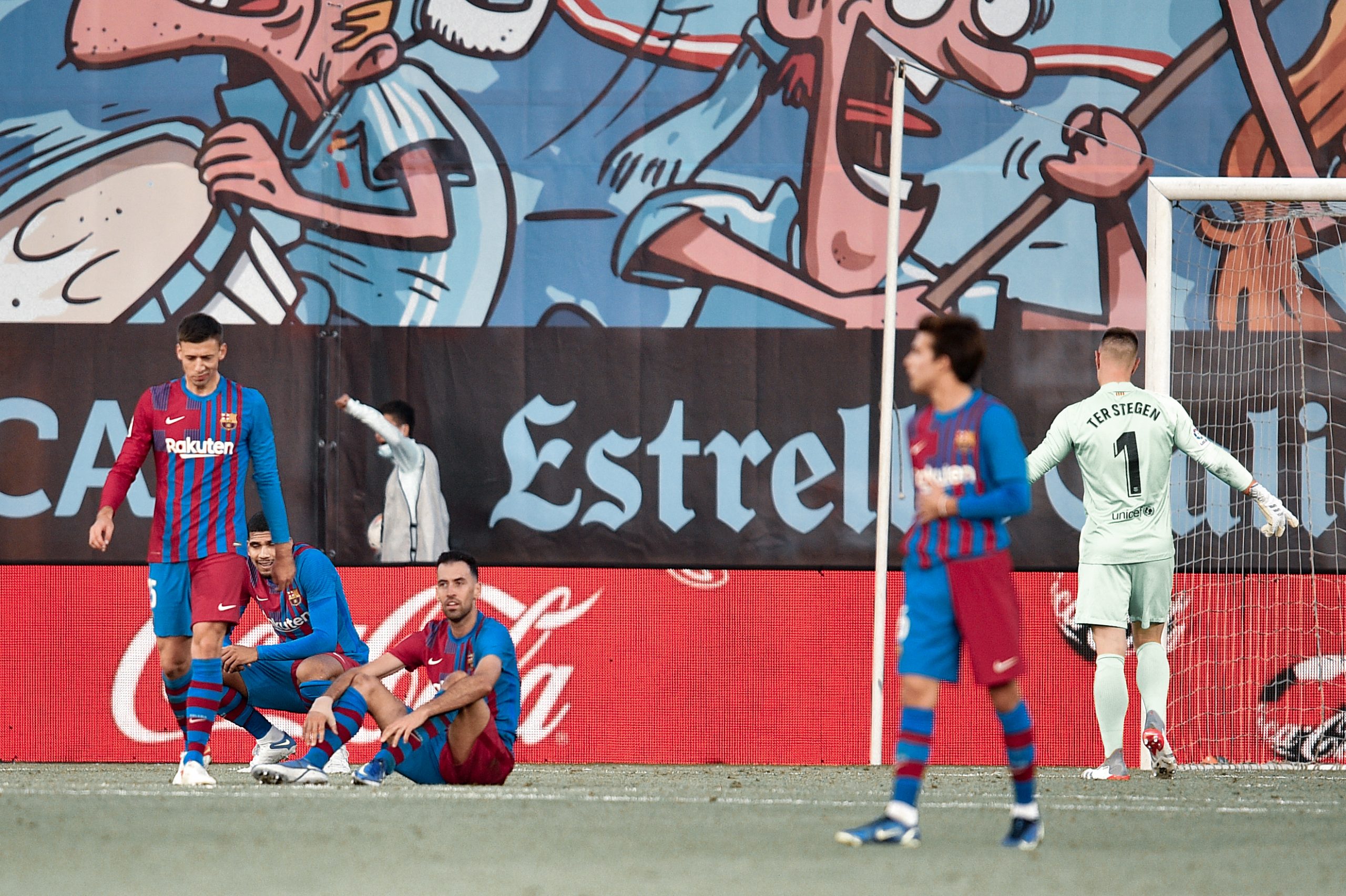 But did it all come down to the players? Or was it a monumental tactical failure? Barça Universal runs the rule over those in garnet and blue.

Barcelona’s goalkeeper had a nightmare of an outing at Balaidos. To say that ter Stegen is now a shadow of himself is no longer an overstatement, for it is visible through his every performance. On the night, the German faced four shots but could get his hand onto only one.

Furthermore, it was his direct mistake that led to Celta Vigo’s first goal, one that gave them hope and made them hungry for more. The German’s drastic dip in form is increasingly worrying for Barcelona.

Mingueza has a strong performance statistically. Three clearances, three tackles and an equal number of interceptions usually signal a statement performance for a defender. Yet, the dominant opposition steamrolled past him too in the second half, much like they did other defenders of Barcelona.

Eric Garcia started the game in Gerard Pique’s absence. The youngster put up a solid show in defence, keeping the hosts at bay during the first half. While Garcia was on the pitch, Los Celestes could barely create chances against Barcelona. However, the defender felt some muscular discomfort towards the end of the first half and asked to be substituted.

Clement Lenglet put up a strong show in defence with very few mistakes on the night. The fact that Barcelona conceded three goals despite the Frenchman’s high-quality performance shows the lack of character and desire in the second half.

Jordi Alba began the game in imperious form, demolishing the home side’s right-flank with his pace and distribution. His first half was rewarded with two assists too. Yet, the Spaniard lost his way in the second half. Celta Vigo threatened breaks on his flank more often than not, and he had a difficult time keeping up with the pace of Iago Aspas and Fran Beltran.

Sergio Busquets is associated with many things, but scoring goals is not one of them. Scoring goals has become more of an annual routine for the captain over his years at Barcelona. It was that time of the year at Balaidos, as Busquets beat Matias Dituro with a well-placed finish from distance. Moreover, the midfielder also registered three key passes on the night.

Of all the young midfielders that have emerged over the past year at Barcelona, Nico has constantly proved to have something different. Though his ability on the ball is at par with his contemporaries, the Spaniard has shown to possess the physical resilience that others lack.

He was once again Barcelona’s best midfielder on the night and even bagged an assist for his perseverance. However, he had to be taken off at the hour mark owing to a muscular injury.

One of the biggest disappointments this season has undoubtedly been Frenkie de Jong. The Dutchman has been far from his former self, often disappearing from games entirely. He did have moments of brilliance, but that was the end of his productive spell on the night.

Sergi Barjuan, by force, decided to change Gavi’s position in his system, and the youngster has not adapted well. The last three games have arguably been his worst performances for the club. On Saturday, the youngster managed only 26 touches of the ball in 80 minutes and completed only 11 passes. One hopes he finds his feet again under Xavi.

Memphis Depay had a relatively quiet night, with other players involved more in the creative duties. Yet, he made his mark with a wonderful header past the Celta goalkeeper off Jordi Alba’s cross. He also completed two key passes at Balaidos.

The teenage sensation limped off with an injured hamstring at the end of a splendid first half that saw him score one of the goals of the season. His curling effort past the goalkeeper from a tight keeper was beyond outrageous. He will now, however, face at least a month out. Fati will look to come back stronger.

Araujo was called into the game earlier than one would expect. With Eric Garcia injured, the Uruguayan returned to his role in central and made seven clearances in a frustrating second half. Yet, one cannot overlook the fact that all three goals for the hosts came while the Uruguayan was on duty. defence

Balde came on at half-time but had close to no impact in his cameo. He only made nine passes in the second half, being largely isolated from the game. A poor outing for the youngster.

An unfortunate injury to Nico meant that Puig finally got minutes under his belt. The midfielder was involved in the buildup, even got a couple of shots on goal. His attempts to create something in the attack were the only bright moments in the second half.

The B team winger came on for the final ten minutes on the night. Abde was active on his flank, making runs into the box time and time again. He took a shot on goal too, but it was saved by Dituro. A decent ten minutes from the teenager.