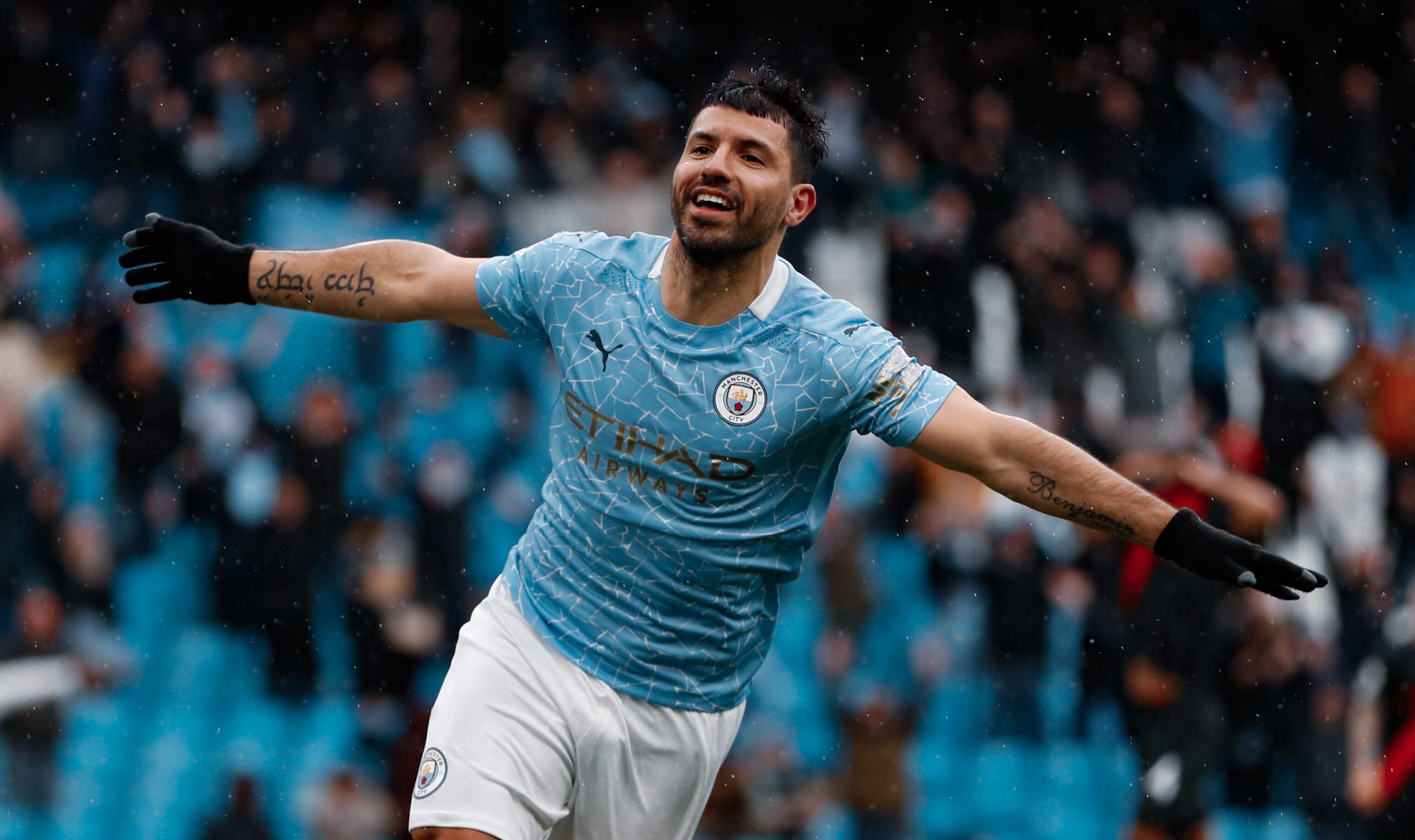 Throughout the past decade, Sergio Aguero is a name that has been archived into the category of the world’s best strikers. Since leaving La Liga in 2011, the Argentine has lit up the Premier League with his current club Manchester City rising to become the club’s all-time top goalscorer and establishing himself as a Premier League great, sitting in fourth place on the league’s all-time goalscoring chart.

This summer, Aguero will depart Manchester and the Premier League and head to La Liga and the city of Barcelona. The Argentine will sign a two-year deal worth a reported €5 million per year, and once the ink is dry, it makes real a dream many Barcelona fans have longed for.

Although the name on the signature line is something to get excited over, the body walking through the doors of the Camp Nou is quite the contrary.

Barcelona might strike gold and experience what Atletico Madrid have this season with Luis Suarez, but the sensible bet should not be placed here. There is a reason why Aguero is being allowed to leave this summer and is no longer in Pep Guardiola’s plans, signs that have become apparent over the last three years of the Man City legends career.

If this is to be the striker Barcelona are putting their hopes and dreams on next season, they could be setting up for a fall, as it is becoming obvious that the club and its fans are getting lost in the romanticism of signing the name Sergio Aguero.

An important place to start is why Barcelona have turned to Sergio Aguero. In a season that consisted of a lot of ups and downs, one thing that has remained constant is the Catalan side’s dire need for a number nine.

Once again, everything attacking wise has been left on the shoulders of Lionel Messi, and although the Argentine can bear this enormous burden, there are times throughout a season where this becomes too much. This was evident in the title run-in this season, where Messi was let down by those around him – something that is becoming all too familiar for the six-time Ballon D’or winner.

But why Aguero? It’s a question that many who are regular watchers of the Premier League will ask, with the Manchester City legend’s decline become very apparent to the eye. After Man City, many would have expected him to return to Argentina or maybe the MLS, and the fact that Barcelona, the biggest club in the world are willing to take on a player the current best team in the world are not willing to keep, has come somewhat of a surprise to many.

The answer to this question is predominately money. Barcelona finds itself over one billion in debt at present, and Aguero offers a cheap solution being a free agent whilst also providing the club with a big name to market. It is also bound to raise funds in the form of shirt sales.

On the pitch, Aguero offers goals and is lethal both inside and outside of the box. The Argentine’s goals against Everton provided a glimpse of the quality that remains, and it is this quality that the Barça board hopes will ease some of the pressure placed on Messi, should he remain at the club.

With the goals comes experience and a serial winner, but that is seemingly it. Those who want this transfer to happen will scrap the bottom of the barrel for more reasons, but they are conclusively not there.

The Barcelona board have got lost in the romance of the signing somewhere along the way, or maybe it is just a pawn move in achieving their ultimate goal of checkmating the king in signing his friend Lionel Messi to a new contract.

Lost in the romance

When a club sells one of its biggest assets to a rival club because of his age and then brings in a player of a similar age a year later to fill the void left by that player, it raises many questions, and it sums up Barcelona and how it has been run in recent times.

This player is indeed Luis Suarez, a player who has gone on to be a difference-maker for Atletico Madrid this season, leading them to the La Liga title for the first time since 2014 whilst Sergio Aguero has sat on the bench for Manchester City when he is not injured.

Age is, in fact, the first reason why the signing of Aguero does not make sense. The Argentine will be 33 when he joins the club this summer and is a player who is certainly showing his years. The Prem legend has succumbed to the demands of playing at the highest level through injuries and once on the pitch lacks the pace and physicality to make a real difference anymore.

It is one of the many reasons why he was not offered a new contract by his current club, and for Barça, who are looking to build for the future, they should have looked for other alternatives who have pace, something the Catalan side desperately require up top.

These injuries should also be an area of concern for the top brass at Barcelona, with the emphasis being placed on Aguero’s reoccurring knee problems.

Since the start of the 17/18 season, Aguero has picked up ten separate injuries and has missed a total of 62 matches as a result. Reliability will be something that is required from the Catalan giants’ striker next season, which is a problem if Aguero is chosen to take up this role.

Although the stats will not show it from the two seasons prior to this one, Sergio Aguero is on a sharp decline, mainly because of his body. The garnet and blue already have several ageing players — Gerard Pique, Sergio Busquets —, and others who are injury-prone — Ousmane Dembele — within their squad, and it begs the question, do Barça really need another one on their books?

Maybe the excitement is built around what Aguero does when he eventually does play? The Argentine’s goal against Crystal Palace reminded us all of his world-class abilities, but that is a rare occurrence in recent times.

Barcelona will most likely set up in a 4-3-3 next season, a formation that requires a lot from its front-man.

There are two types of striker preferred for this set-up: a false nine like Roberto Firmino or a fast striker who can slice across the shoulders of defenders such as Erling Haaland. Aguero is neither and does not have the pressing capabilities for this role either.

There is a possibility of the front three next season consisting of Antoine Griezmann on the left, Aguero up top and Lionel Messi on the right. Although all are technically gifted, the lack of pace is apparent, and everyone saw how easy it was for defenders last season, replacing Aguero with Suarez in that attacking trident.

The Blaugranas would also lose a body working back, as Aguero would stay up top with Messi causing more issues defensively, something the Catalan side defiantly do not need.

Aguero is a huge name in the world of football, and fans are right to get excited over the signing but should not expect much. The Argentine is a phenomenal goal scorer but, outside of that, offers very little at his age, especially with the demands of the 4-3-3. The Catalan side still needs another number nine and try to get the best out of Aguero by using him sparingly.

How Aguero should be used

Barcelona have a long tradition of playing their second-choice goalkeeper in the Copa del Rey, and it would be wise to apply this to the striker position next season.

As mentioned before, Barcelona should look to sign another striker with pace, and according to many reports, that is looking like it will be Memphis Depay, a player that will certainly divide opinion amongst Cules.

Sergio Aguero should be used as a backup, playing in the Copa del Rey and in La Liga matches that require rotation. This might ensure that Barcelona gets the best out of the Argentine, keeping fit and ready whenever he is needed most.

As a starter, Aguero’s body will not hold up. Even if it did, the Premier League legend cannot press, break the lines or trackback – abilities that are required to be Barcelona’s number nine. The signing is a confusing one to many considering where Barcelona are trying to get to and how they are using youth players to get there.

Erling Haaland is the man Joan Laporta wants more than anyone and that cannot happen until next season, but does that mean the Catalan capital should throw away a season until the Norwegian arrives? No. The right choice up top would be Ansu Fati, but the signing off Aguero and Depay means the young Spaniard will play on the left next season.

Aguero was a great player, a fox in the box and a goalscoring machine to put labels on him. Unfortunately, this version of the Argentine has been and gone with father time remaining undefeated in his case. Barcelona wants to get back to where Manchester City are but are signing a player that is not good enough to play for the Premier League champions. It’s a fact that sums up this transfer, a fact that sums up Barcelona.