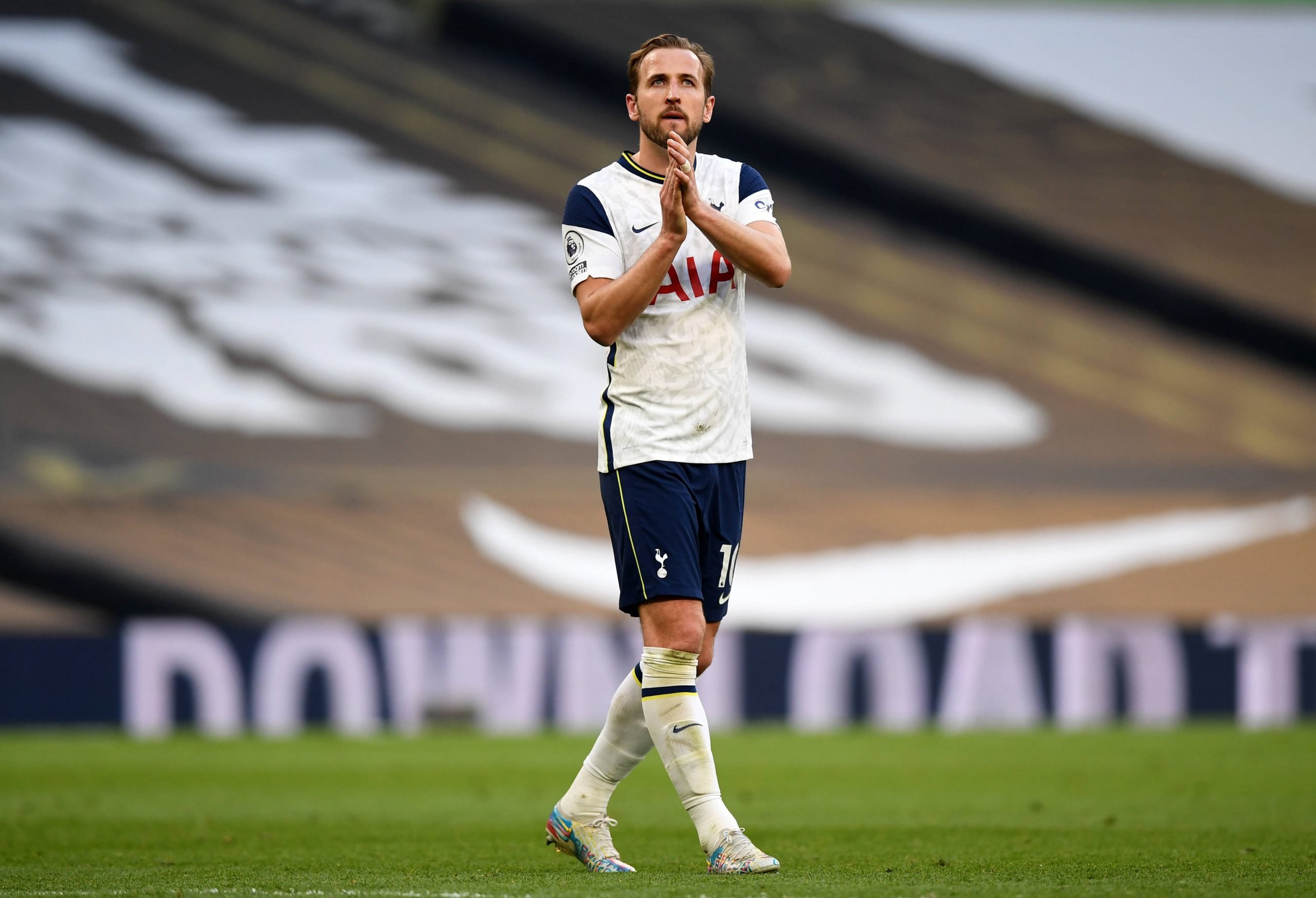 If there is one name on every Premier League fan’s mind, it has to be the prolific Harry Kane. The Englishman not only leads the scoring charts in the Premier League with 22 goals but leads the assists chart as well with 13 assists to his name. Safe to say, he is English football’s man of the moment.

It has been seven years since Kane had his breakthrough season for Tottenham Hotspur. These seven years have been fruitful for the English captain on a personal level, and the statistics reflect that – 220 goals in a mere 334 appearances highlight his ability and importance to the club. The same, however, cannot be said for Tottenham.

In the same time span, the club has racked up no major honours. While they did reach the Champions League final and, more recently, the Carabao cup final, both these finishes were papering over cracks that showed in their league performances.

For an ambitious player like Kane, this must be particularly frustrating. There seem to be no clear signs which indicate that Tottenham will be competing for titles any time soon. Therefore, it shouldn’t come as a surprise that he has all but officially asked to move away from London.

He has previously expressed his love for the club but has also stated that he won’t let it be a factor holding him back from winning trophies.

“I’m an ambitious player, I want to improve, get better and become one of the top, top players. It all depends on what happens as a team and how we progress as a team. So it’s not a definite I’m going to stay there forever, but it’s not a no either.”

Multiple clubs sense blood in the water at Tottenham. It is not often that a player of Kane’s ability is available. This is precisely why Barcelona should move swiftly for the Premier League forward.

Earlies this season, Barça fans saw the departure of Luis Suarez to rivals Atletico Madrid. It was expected that Barcelona would move for a striker — with links to Memphis Depay and Lautaro Martinez purring — but it was not to be.

What followed was a season of frustration in front of goal in several games. Barcelona do lead the scoring charts in La Liga, yet in big matches, like the one against Atletico Madrid, for example, a strong need for an elite finisher was felt. There is only so much Lionel Messi can do alone.

Moreover, speculation is the Argentine great might leave post this season – making this operation for a striker all the more important. This is where Kane’s availability comes into the picture. While Tottenham have tagged Kane at nearly €150 million, the ability Kane brings to the table makes it absolutely worth every cent.

Prolific in front of goal

If there is something you directly correlate with Harry Kane, it is his goal-scoring record. The Spurs man has two Premier League golden boots to his name and is competing with Liverpool’s Mohamed Salah for yet another one this season. He has never failed to score less than 17 goals in a season since his breakthrough in 2014/15 and is also the league’s top scorer over the course of those seven seasons.

Out of 105 goals scored by Spurs this season, Kane is responsible for 27, which amounts to a little over 25% of the English side’s goals. For he is not just a poacher but has the ability to score from anywhere on the pitch – and he does not shy away from showcasing this ability, as can be seen by his shot map.

When you look at the heat-maps of the two players, it is observable that they occupy similar areas as well. It is, therefore, clear that Kane’s attacking prowess is, as things stand, better than the Frenchman’s.

During the start of the season, when Tottenham were soaring high, it was observed by many that it was the Korean stalwart Heung-min Son that was primarily doing the scoring in the league while the usual culprit — Harry Kane — provided him with the assists.

Now, Kane had always possessed the ability to find the correct pass and the vision to spot a run – but it was under new manager Jose Mourinho that this was truly on display. Primarily due to a change in role brought about by the Portuguese manager where Kane was asked to drop deeper and link up with the midfield. This “nine and a half” role has clearly not hindered his scoring and has opened up whole new attacking avenues for his team to exploit.

In the previous three seasons, Kane had a combined 12 assists to his name. This season, however, his assist tally stands at 15. Moreover, in the previous three campaigns combined, his xA (expected assists) stand at 10.8, whereas this season itself, it is at 8.5. It is safe to say that the 27-year-old relishes his newfound role under Mourinho.

Kane’s ability to find a pass is not just limited to near the box. Many of his assists are from lobbed passes — perfectly weighted balls over midfield and defence that lead to his teammates being 1v1 with the opposition goalkeeper. At Barcelona, this ability to create a clear chance from long range is a rare commodity, with Messi being the major propagator of it. This often means that when Messi is boxed out of the game, Barcelona’s game is often at a standstill, with many sideways passing leading to nowhere.

Locking horns against Antoine Griezmann this season, Kane has managed a sum total of 15 assists whereas the World Cup winner has 13 even after having played 5 games more. In terms of xA per 90, both the players seem to be level, with Kane managing an xA of 0.23 per 90 and Griezmann managing an xA of 0.21. The Englishman’s shot-creating actions per 90 stand at 3.38 whereas the French stalwart’s stands at 3.04.

It is majorly the ability to link up from a distance that the Frenchman lacks – 82% of the passes that Griezmann attempts are ground passes. However, when it comes to Kane, only 55% of his attempted passes are ground passes. While some of it may be down to the playing style of both teams with Tottenham adopting a more direct approach, a little is also down to the ability to find a pass from distance – something that Griezmann seems to have lost since the arrival to the Catalan capital.

Fitting the Harry Kane piece in the Barcelona puzzle

Kane’s game seems to have no visible flaws, really, making him a really special footballer. He is what we could call a “complete forward”, something that could be said about Luis Suarez at Barcelona as well.

The English captain’s ability to link up, come deeper and find key passes is ideal for the Barcelona setup which relies on keeping the ball for long periods. In a 4-3-3 — Barcelona’s most used setup —, Kane would be the ideal striker. His ability to score from distance and do what seems impossible in front of goal is evidently lacking since Suarez moved to Madrid.

In addition to the same, he boasts of incredible strength and the ability to hold on to the ball, making him a target for opposition central defenders, creating space for his teammates. Lastly, Kane presents an aerial threat, which could be useful when it comes to set-pieces. In the current Barcelona squad, no one barring the centre-backs seems to possess this ability, so it could be convenient. All in all, Kane seems to be the perfect solution to Barcelona’s issues in front of the goal.

However, Kane’s arrival would require a huge overhaul at the Catalan club. Players who are considered to be dead-weight would definitely need to be sold first — this would include players like Philippe Coutinho, Samuel Umtiti, Sergi Roberto, among others, unfortunately.

Moreover, the club would need to make key decisions with respect to players like Antoine Griezmann and Ousmane Dembele, who have done well but could be significantly improved upon. Most importantly, if Laporta wants Messi at the club, he would need to offload such players to accommodate Kane, given his wages. If the Argentine great chooses to move on, however, it would free up a large chunk of wages which would make it easier to accommodate Kane.

Kane is on course to be one of the greatest strikers to play the game, and if he is disgruntled at Tottenham Hotspur, it should be looked at as a golden opportunity to have a world-class striker for years to come.

With an elite forward, this time with a 100% fit in the team, Barcelona could look towards moving some of the old stalwarts of the golden generation on and starting a new cycle – an issue that has been pressing to be addressed for a couple of years now.

Whether Barcelona makes a move for him is to be seen, but one thing is clear — if Harry Kane does arrive, it would be a major boost to the club and could very well be the start of a new golden generation under Laporta.