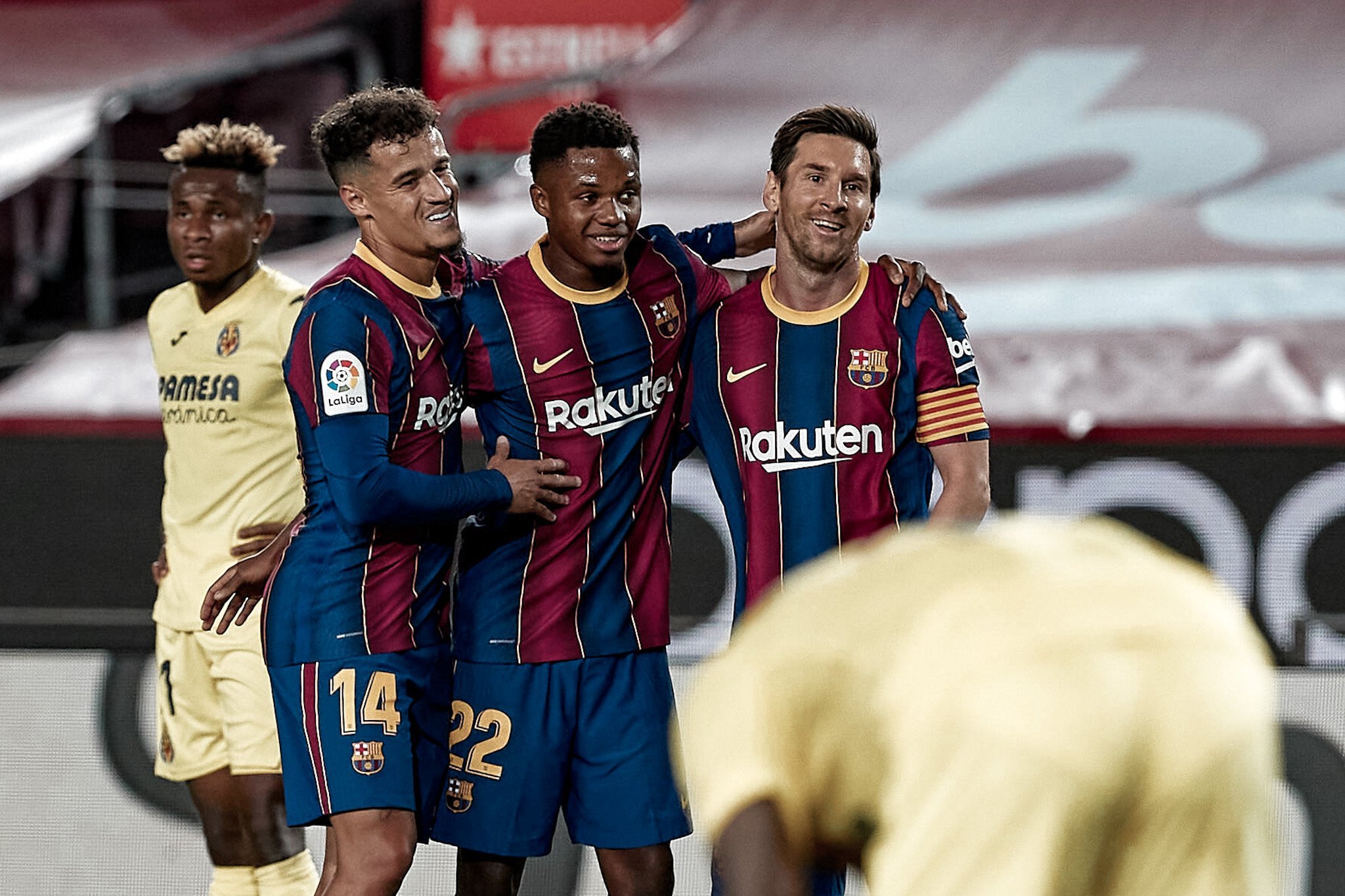 With a 4-0 victory at the Camp Nou, Koeman’s side has started the season on a positive note. Find out more about the tactical aspect of the match in this tactical analysis of Barcelona’s match against Villareal.

La Liga is finally back, and it’s back in full swing. We saw many high-scoring matches, with even Atleti scoring 6 goals against Granada. A very entertaining start to La Liga was capped off by Barcelona’s 4-0 Victory over Villareal. Koeman’s first La Liga game in-charge of Barcelona was a resounding success. The mindset of the players involved was clearly different from the mindset under Setien. With many players looking rejuvenated, Barcelona put in a performance which was desperately needed considering the fact that the wounds from Lisbon haven’t yet healed. Find out just how Barcelona managed to dominate a strong Villareal side in this tactical analysis.

Barcelona started out in a 4-2-3-1 as expected. The only surprise was that Messi’s starting position was more central than usual and Griezmann occupied the right-wing. Messi does eventually drift towards the centre anyway but the starting position is usually wider.

Villareal were in a 4-4-2 which later transitioned into a 4-4-2 diamond in the second half after the substitutions. Right from the start, Villareal looked to press from the front, with Chukwueze and Moi Gomez cutting out passing lanes to the full-backs and the two Villareal strikers pressing Barcelona’s center-backs. Here, an advantage of the 4-2-3-1 Koeman deployed was immediately visible. De Jong would drop back to receive the ball and then play it forward to Busquets, who was the other pivot. Had Barcelona played a 4-3-3, the pivot would have dropped back to receive the ball and build-up from the back in this case. But the midfield would be stretched vertically which we saw many times last season.

In midfield, Barcelona were prevented from playing through the centre by Parejo and Coquelin. The distance between Villareal’s midfield and defense lines was not much which forced Barcelona towards the wings. This strategy came back to bite Villareal in the form of Ansu Fati. The 17-year-old left-winger was unplayable against Villareal. Gaspar was unable to contain him. Jordi Alba was much better than in a long time. The work-rate Koeman demands and the many extra training sessions were really showing. After a 2019/20 season which wasn’t the best for Barcelona, yesterday’s performance was very impressive.

Both wingers would regularly tuck-in between the full-backs and center-halves. This allowed Barcelona’s full-backs to advance up the field much more. With the full-backs attacking and the wingers tucking in, the Villareal defensive line would be occupied. This allowed Coutinho more space than usual. Along with this, Busquets and De Jong would be available to either stop the counter, or to act as passing options. This assortment of many attacking roles allowed Barcelona to have sustained attacking possession.

Villareal had a clear game plan as well. Considering the fact that their two strikers are performing well and are well-synchronized, the wingers were instructed to cross the ball often. The full-backs would advance, but not overlap frequently. This could either not be a part of the game plan or because of the attacking threat, Barcelona posed from the start. With Dani Parejo in midfield, Emery would ideally be able to continue playing the possession-based football his teams play. Coquelin would offer a bit of dynamism in midfield along with the Spanish midfielder.

However, Koeman took an interesting decision and gave Busquets the role to man-mark Parejo. Though both were surprisingly not the best on the ball on the day, Busquets did well to restrict Parejo to lateral and back passes. In the second-half, Vilalreal’s game plan was executed better in the 4-4-2 diamond. This allowed Parejo to get on the ball more, wit him playing a major role in the build-up. Emery knows his players’ strengths very well. Parejo in the defensive mid role, with pacey wingers on either sides means fast transitions. For Barcelona s well, the transitions were key. Coutinho’s mediapunta role and the freedom Messi has both contributed to this.

We already saw the many benefits this formation has offered, taking the strengths of the players Koeman has into full consideration. The ease during build-up with one pivot dropping back, being able to sustain the attack with the mediapunta getting more space, the freedom Busquets had to man-mark Parejo, which would have been difficult in a single pivot, etc. Another one of the advantages is in defense.

Barcelona were vulnerable in defense throughout last season. Jordi Alba looks like refreshed and fitter than usual, and with Dest potentially joining the Blaugrana, the full-backs are looking promising. In case that Barcelona does get caught on the counter, Koeman does have a solution to one of the problems. When Barcelona are on the backfoot, De Jong and Busquets would need to make sure their positioning is immaculate. They were instructed to plug the gaps between the center-halves and full-backs, which would have a two-fold purpose. Firstly, through-balls against more creative players would be much more difficult, with the gaps being reduced and Coutinho and Griezmann helping in defense. Secondly, the opposition would be less likely to crowd the box, since Barcelona can now afford to get at least 4 players into the box if the pivots were to position themselves as such. However, this would be very dependent on the split-second judgment and whether the players decide to press or track-back.

For Koeman’s first La Liga match, the performance was quite promising. Barcelona looked better tactically and in terms of hard work than Villareal as we saw in this tactical analysis. The latter being something that Barcelona desperately need, what remains to be seen is how Barcelona will fare against teams that rely on individual ability more than Villareal and the unpredictability that follows. Apart from this, will the players be able to sustain the intense work ethic Koeman demands? If Barcelona do decently in these conditions and some others, we might see a much better season from them than expected.