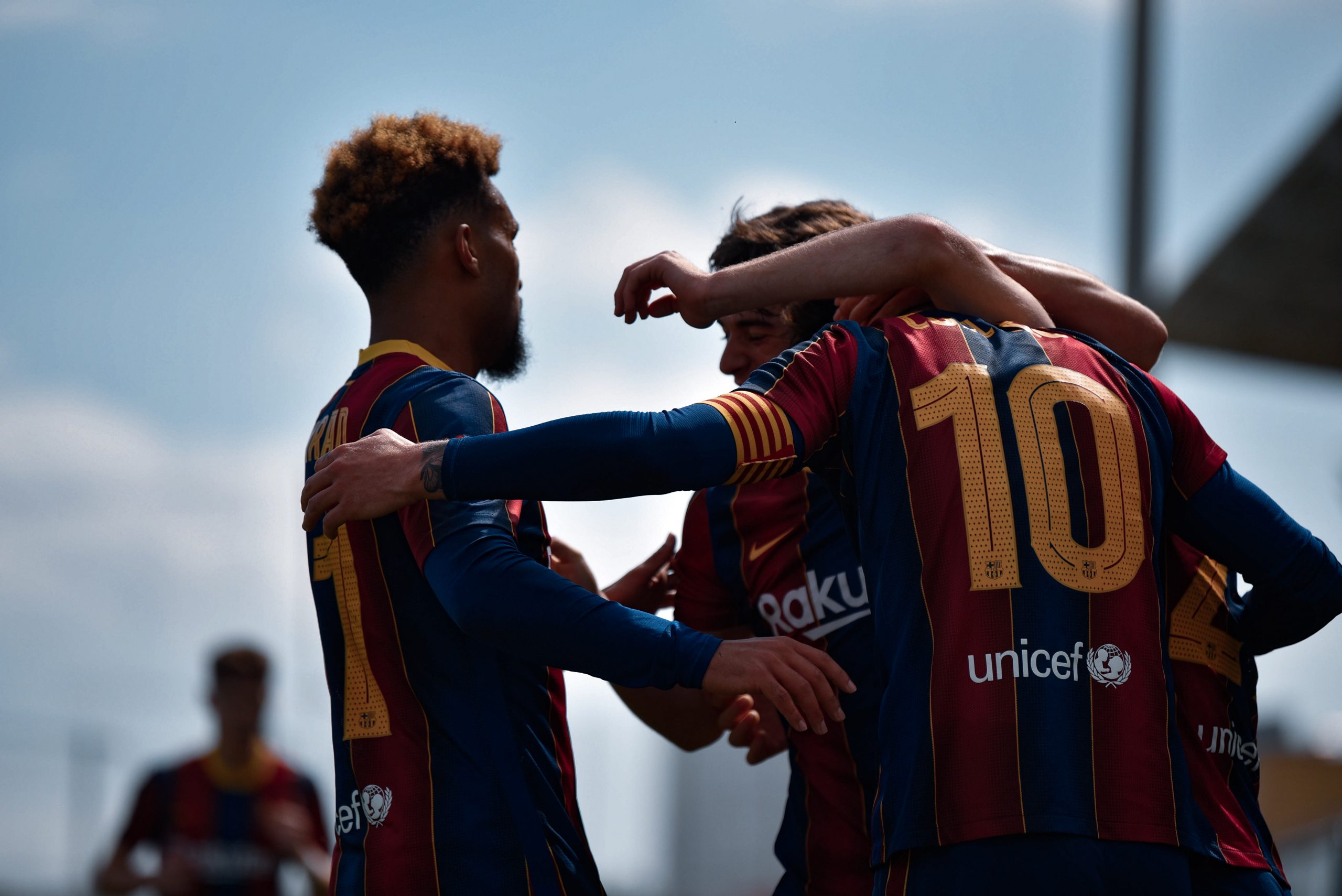 An analytical look at the setup, style, and key performers from Barcelona’s reserve team. Which players and what qualities do fans have to look forward to in the club’s future?

So far, Barcelona B’s season has been another successful campaign under García Pimienta. The side finished just one point off the top of their initial group and have secured a spot in the second phase of the Spanish third tier.

Some new faces have stepped into the side, some have taken on increased responsibility, and, overall, the team seems to gel quite well. There are an abundance of talented players, each providing their unique skillset, as well as a reason to be excited for the coming years.

With that in mind, what do the numbers say about Barça B’s performance in 2020/21?

While the first team has undergone some tactical experimentation this season – starting with a heavy dose of the double pivot and shifting to a three at the back more recently – Pimienta has kept his side lined up primarily in the traditional 4-3-3.

There has been some alterations mixed in, but the single pivot, two midfield interiors, and inverted wingers system reign supreme. A look at how the players have positioned themselves over the course of the season begins to reveal some of the nuances of the side.

At the heart of the defence, Arnau Comas has been a mainstay, leading the side in minutes played. His partner has usually been either Mika Mármol or Santiago Ramos Mingo. The centre back pairing plays a crucial role in building out from the back.

Both full-backs get into the attacking half in typical Barça fashion. At just 17 years old, Alejandro Balde has begun his integration into the B side this campaign, but that left-back spot has also been an area of heavy rotation with the likes of Mármol, José Martínez, and Nils Mortimer. Álvaro Sanz has held down his role pretty consistently on the right.

Jandro Orellana has impressed many with his performance as the midfield pivot. He serves as a metronome, primarily staying deep and central to keep play ticking in possession. Nico González has provided a well-rounded presence on the right but also dropped down to the pivot role at times.

The left interior role has taken on more of the attacking responsibility, as seen by Lucas De Vega’s tendency to push higher than the other midfielders, getting in and around the left attacking half-space. The same can be said for the starlet Ilaix Moriba, who has occupied that role as well.

Barça B then possess great quality in the wings but in different fashions. The American on the left, Konrad de la Fuente, stays wider and is more likely to beat his man down the flank and drive towards the byline. On the right, Álex Collado drifts centrally, looking to do damage from the right half-space.

Up top, Rey Manaj provides more of a traditional number nine profile. He has solid physical tools and is mainly active in the penalty area. Of course, the goalkeeper position should not be forgotten as well. There, the minutes have mainly been split between Iñaki Peña and Arnau Tenas, both of whom are active in possession and relatively accurate passers.

What kind of actual performance comes from this tactical setup and those profiles? Statistically, the team style is just about what one would expect from a side well-versed in the Barcelona way.

Pimienta’s men dominate in possession, leading the whole Segunda B – across all groups – with an average possession of 61.9%. The ball is moved quickly during this time, as the side’s passing rate – passes per minute of possession – of 14 is sixth in the division out of 102 total teams.

The opposition have a tough time winning the ball, as Barça B have the second-highest PPDA (passes per defensive action) against in the division at 13.7, meaning they string together many passes on average before an intervention is made. This is largely because most of the passes are kept short, with a division low 32.5 long pass attempts per 90 minutes – 6.34 lower than the next closest.

Pimienta also gives his players freedom to carry the ball forward and take defenders on. That trait is evidenced by the fact that the side sit second for attempted dribbles per 90 minutes and first in progressive runs per 90 minutes in the league.

This all translates into chances, too. Only five sides have racked up more than Barça B’s 25.99 expected goals over the course of the campaign.

Out of possession, the team look to press with intensity. They are among the top 20 for PPDA with a tally of 8.12. The league average is 9.41, so Barça B tend to allow fewer passes than most teams before stepping in and committing a defensive action.

Clearly, there is a strong system in place, with talented players learning many of the principles that fans love to see at the Camp Nou. Many players look like they have a shot at making it into the first team eventually.

Now, let us take a more in-depth look at the individual performances that have driven Barça this season. In order to ensure a good sample size, only players with 800 or more minutes played over the season will be included, and they will be compared against their peers from other clubs who fit the same criteria.

Starting in the back, Arnau Comas has shown to be a comfortable ball-carrying centre back. He stands out more for progressing the ball through dribbling than through passing, but he is efficient when asked to play forward or long. While not strong in the air, Comas has also been a relatively well-rounded defender.

While some of his minutes have come higher up as a left-back, Mika Mármol’s ball progression numbers are still awe-inspiring. He has advanced the ball with carries and passes at both a high volume and a high efficiency. To add to that, he wins the ball frequently and is definitely the one more likely to step up and engage in a duel when paired with Comas.

The alternative to Mármol at left centre back, Santiago Ramos Mingo, has also brought a strong progressive presence and seemingly a threat from set-pieces based on his shooting metrics. Once again, though, his performance has not been very strong in the air, which is definitely a place where an opponent could look to hurt Barça B.

Álvaro Sanz may be one of the unsung contributors to the team. He has provided an effective blend of attributes, with decent creative output, solid dribbling numbers, excellent progressive passing, and smart, safe defending.

Despite playing as a pivot, Jandro Orellana has put up some incredible attacking numbers for a centre midfielder. He gets into shooting positions and has been adept at setting up his teammates for dangerous opportunities. That, combined with his dribbling effectiveness, solid progression through passing, and some decent reading of the game on defence, certainly make him one to watch going forward.

Nico González does not have the same attacking output but provides an even more serious dribbling threat. His overall well-roundedness has allowed him to contribute from multiple roles in midfield.

Then there is Lucas De Vega on the left side of the midfield, who brings all the flair, creativity, and progression while being asked to do much less on the defensive end.

Ilaix Moriba has provided many of those same qualities, but he has a much stronger tendency to make runs into the box and find scoring opportunities for himself while being less of a source of progression than De Vega. This has already been on display a few times in the senior team, with Lionel Messi picking out the youngster in advanced areas.

On the wing, Konrad has a specific skill set, and he uses it with great effectiveness. His dynamism when carrying the ball and dribbling at defenders in one vs one situations is truly remarkable. The winger is another young talent who has already caught Ronald Koeman’s eye and appeared for the first team.

As previously mentioned, Konrad and Álex Collado function in different settings, but Collado also has elite dribbling numbers. Outside of that, Collado is much more of a volume shooter and also drops deeper to get more involved in buildup play with his passing.

Finally, 24-year-old Rey Manaj has put up some decent numbers leading the line for Barça B this season. He has been able to find good scoring opportunities and been one of the team’s only aerial presences, but taking his age and limitations into account, hopefully, this spot can be filled with a more of a prospect that can be developed going forward.

It is also worth noting that this data can not fully consider qualities such as off-ball movement, breaking lines, or body orientation, where many of these players excel because of their background in La Masia. All things considered, it would not be a surprise to see several of these squad members knocking on the door for first-team minutes sooner or later.

Overall, the running of Barça’s reserve side continues to be a source of optimism for fans. Of course, the team’s main purpose lies in development and preparation for senior football, which García Pimienta has done brilliantly by instilling aspects of positional play and the Barça philosophy, but it is also great to see that translated into results.

The team are still in the race for promotion, and players are putting up excellent numbers, even after several key members were lost from last season’s squad. The continued success, along with the recent transitions to the first team from the likes of Ronald Araújo, Óscar Mingueza, and Ilaix Moriba, are proof of the full merits of Barça B.