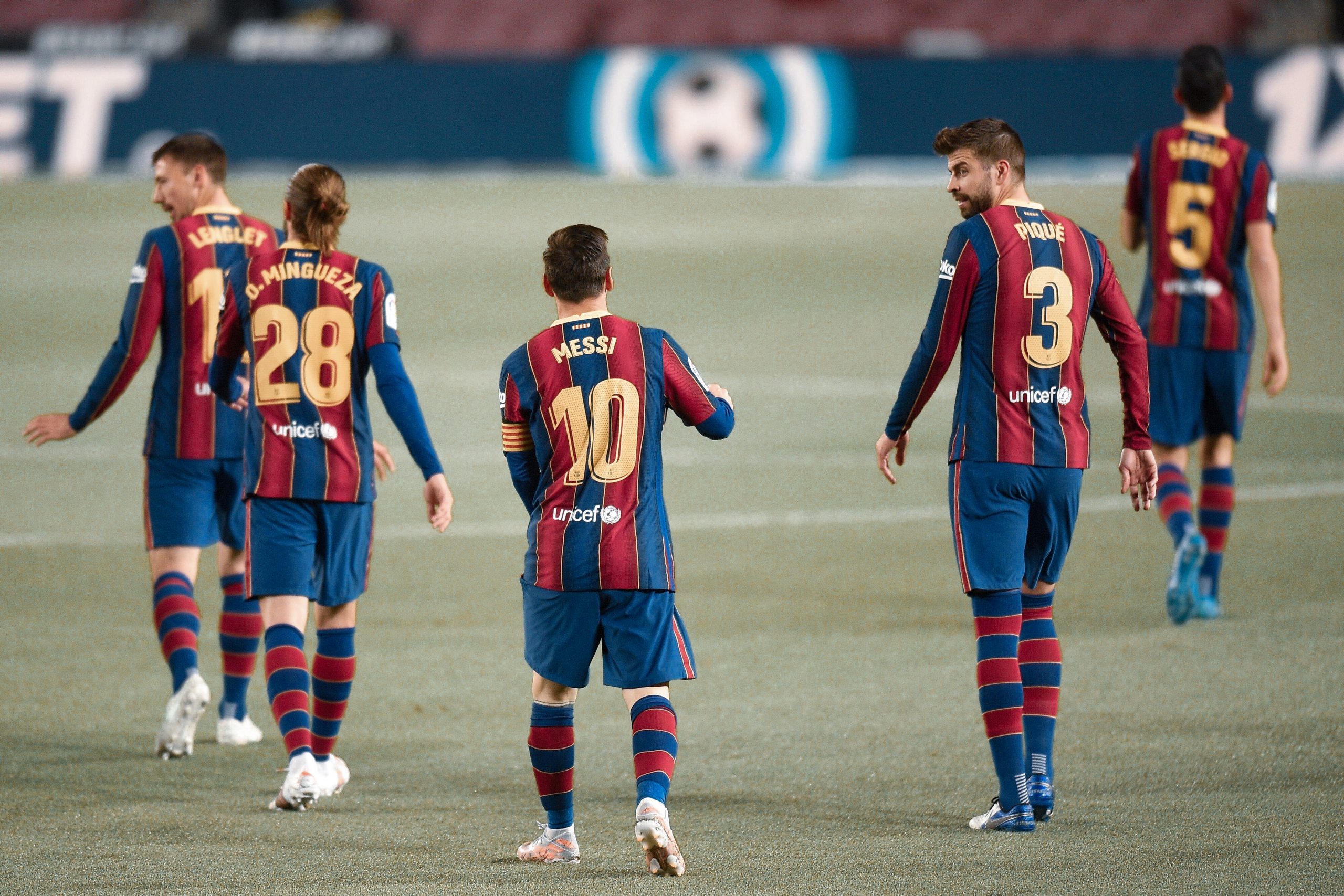 Barcelona kept their title hopes alive with a crucial victory over Getafe. A brace from Lionel Messi, a penalty from Antoine Griezmann, a towering header from Ronald Araujo, and an own-goal saw them put five goals past one of the sturdiest defences in La Liga. In fact, it was the first time Barça scored five goals against Getafe since 2007, the match where Messi scored his “Goal of the century.”

Despite the goal-fest, however, it was not a pretty 90 minutes of football. Join us as Barça Universal discusses four talking points from Barcelona’s win over Getafe.

A Sub-par, but Crucial Three-Points

The match against Getafe brought many of Barça’s issues to the surface, but they still managed to walk away with a crucial victory. Admittedly, it’s hard to imagine a match won 5-2 as sub-par. Perhaps it’s just a sign of our increased expectations for a team that has improved so much since the beginning of the season, but Barça evidently faltered in the game’s second half.

The hosts got off to an early 1-0 start thanks to a brilliant assist from Sergio Busquets, but a defensive lapse outside of the box resulted in a dangerous cross and an own goal from Clement Lenglet. On a positive note, they did not let Getafe’s equalizer get into their heads. The Catalans fought back, recovered, and continued to dominate the rest of the half, heading into the locker room up 3-1.

In the second half, Barcelona were lethargic and unfocused, reminding culés that their team can sometimes lose concentration for large portions of a game. Getafe were all over them, pressing expertly and not letting their opponents get into any sort of rhythm. In the 69th minute, Barça gave away a penalty that Enes Ünal converted, making it 3-2. Disappointingly, that goal did not sharpen the Blaugrana’s focus, as they failed to play out of the back effectively, and they consistently lost possession in the middle of the park. For the final 15 minutes, Barcelona was in dire need of energy and reinvigoration, but Ronald Koeman’s substitutes did not make enough of an impact.

Barça scored twice in the final two minutes of the game, but that distracted from a poor showing the second half. Their ever-present issues showed up again: defensive lapses, careless mistakes in the back, and long spells of losing concentration. It was a sub-par second-half, but the team was effective enough in front of goal to walk away with a crucial three points.

The new structure is a mere paper over the cracks

The move to playing three centre-backs with two wingbacks was a pragmatic and effective decision from Koeman, getting the best out of attack-minded Jordi Alba and Sergiño Dest and allowing for better recovery and covering due to individual errors. However, the team is still susceptible to defensive mistakes, and they came to light during last night’s game.

The formation has taken immense pressure off Barça’s centre-backs. Take Clement Lenglet, for example. The Frenchman has thrived playing as a left-sided centre-back in a back-three and has begun to turn around a rough season. It covers his defensive mistakes and allows him to make a bigger impact in the final third. Against Getafe, his ball to Griezmann was cut-off but led to a shot from Messi that hit the cross-bar, and he found Frenkie De Jong in the box, who sent a dangerous cross into the box. He did score an own goal, but he can not be blamed for it.

Furthermore, playing at right centre-back, Oscar Mingüeza had a relatively quiet night, but he was caught out of position at times, and that could be dangerous against better opposition. Also, in the 66th minute, centre-back Ronald Araújo gave up a penalty that reduced Barça’s lead to 3-2.

In all, playing three at-the-back will continue to be a minor stop-gap solution in terms of patching up an overall poor defence. Until the end of the season, if Barça don’t shore up their defensive errors, these mistakes could haunt them against more clinical opposition.

Tactical Flexibility between Roberto and Dest

This match brought up another key question: who should start Barcelona’s most important games at the right-wingback: Sergi Roberto or Sergiño Dest? Oscar Mingüeza is another option, but he is playing brilliantly as a right centre-back.

Fortunately for the team, both Roberto and Dest bring something different and offer tactical flexibility. Roberto has been in and out of the lineup all season due to injuries, but he played a solid, albeit uneventful, game against Getafe. He was involved in the build-up and offered control in possession.

Dest, on the other hand, earned himself rest against Getafe. The young American has immense flair and dribbling ability, but he does not yet pass as well as Roberto or get involved in the middle-third. On the contrary, Dest offers a lot more offensively in terms of explosiveness into the box and shots on goal.

Seeing Sergi Roberto in action was a refreshing change of pace, even if his performance did not turn heads, and his return allows Koeman more tactical flexibility. Roberto will operate more as a wide-midfielder or playmaker, whereas Dest will play more like a winger, letting Koeman pick and choose based on a game-by-game basis and what will work better against the opposition.

Sergio Busquets at his best; Pedri needs a rest

This match also showed the world once again why Sergio Busquets is in the midst of a renaissance season. In the opening minutes of the game, the Spaniard sent a beautiful through ball to Mess that put Barça up 1-0, threading past three defenders from inside his own half. Other than his assist, he had a dominant performance, competing 103 out of 107 passes, 7 out of 8 long passes, and winning four ground duels.

Busquets continues to thrive with three centre-backs behind him, giving him more defensive cover, more energy to press, and allowing him to make more of an impact in the final third.

His midfield counterpart, on the other hand, Pedri, did not have such a good display. Overall, the 18-year old was not involved in the game, he looked tired and gave a sub-standard performance. He has been one of Barça’s most consistent players all season long, but it could be that tired legs have gotten the best of him. Pedri has played in 46 matches of the Blaugrana this season, the most of anyone in the team, and he has the sixth-most minutes logged. Koeman should have subbed him off with minutes to go, but if there’s one thing Pedri has shown throughout the season, it’s that he is tireless.

Unfortunately for the youngster, the tight league race will mean more minutes and fewer opportunities to rest. As such, Koeman should make sure to rest players whenever possible.

Barcelona were lethal in front of goal and walked away with three crucial points. Now, they look ahead to another tough opponent this Sunday: Villarreal.