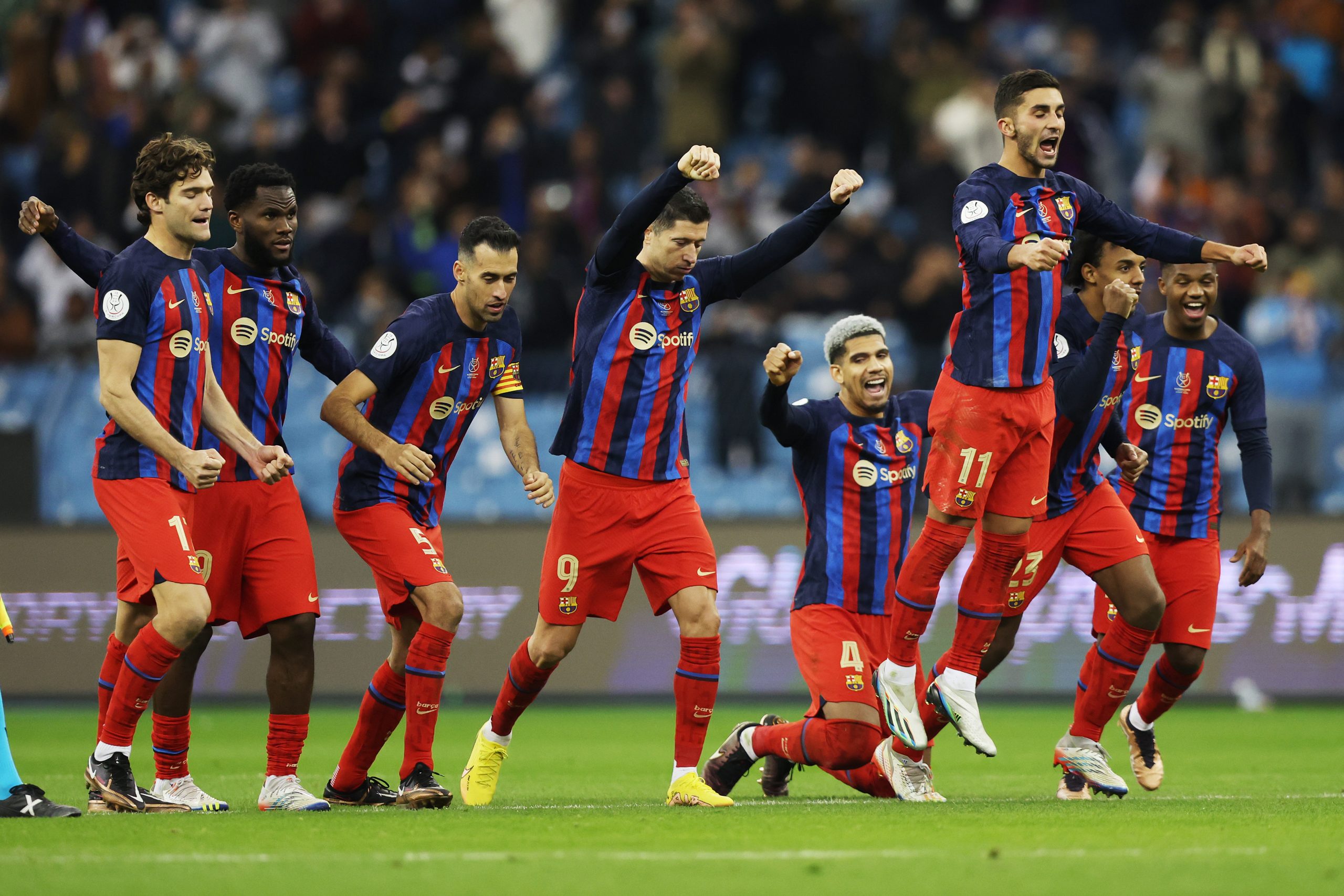 Barcelona were made to win the hard way against Real Betis on Thursday as they strived to earn a berth in the final of the Supercopa de Espana. The Verdiblancos began the game tamely but were never short in spirit or intent as they equalised two times to force the game to a penalty shootout.

Robert Lewandowski opened the scoring late in the first half before Nabil Fekir equalised in the second period. Ansu Fati’s golazo restored the Catalans’ lead in extra time, but the joy was short-lived as Loren Moron cut the deficit one more time.

The attention thus turned to the penalty shootout where Lewandowski, Fati, Franck Kessie and Pedri were all on point for their side. Manuel Pellegrini’s men, however, had two attempts saved, thus giving the Azulgranas the win.

Barça Universal brings you three talking points from the action on Thursday night.

1. What was Xavi thinking?

Since his arrival last season, Xavi Hernandez has ensured a positive culture change in Barcelona’s dressing room. He did not hesitate to sacrifice friends and reputed names for the overall good and has undoubtedly made the team better as a unit.

The one underwhelming aspect of his management, however, is his in-game decisions. Despite paying the price for his mistakes in the past, Xavi continues to err on the same front.

When Barcelona had a solid one-goal lead through Lewandowski’s opener, he chose to remove the team’s best performers.

Ousmane Dembele was the side’s best attacker on the night, constantly creating threats with his pace and dribbling. In addition to three successful dribbles, he recorded one key pass and a shot on target. Yet, he was taken off with 30 minutes left on the clock.

A similar story ensued with Frenkie de Jong. The Dutchman was having one of his better performances, linking the defence and attack while playing as the pivot but was forced off at the hour mark. Unsurprisingly, the Blaugranas were forced to pay the price.

Another instance of poor management came in the 78th minute when the Barcelona legend called up Andreas Christensen and Marcos Alonso a tad bit too late. The defensive substitutions came in seconds after Betis’ equaliser, leaving the team with fresh legs in defence when they needed a replenished attack.

For two seasons, Marc Andre ter Stegen struggled in goal for Barcelona and was statistically one of La Liga’s worst goalkeepers. However, everything has changed since the beginning of the 2022-23 term.

The German international has been a force to reckon with this season, overseeing 12 clean sheets and conceding just six goals in 16 league appearances.

Against Los Verdiblancos on Thursday night, he was once again at his dazzling best.

In ninety minutes, Ter Stegen produced five saves including a whopping four from inside the box. In addition, he won an aerial duel, made two clearances and completed over 92% of his passes.

His save in the 32nd minute to deny German Pezzella’s point-blank range header was crucial in the context of the game as it would have given Pellegrini’s side the lead. Late in the first half, the German was called into action again as Luiz Henrique went for a goal.

In the decisive penalty shootout, the newly-appointed fourth captain made two brilliant saves to deny William Carvalho and Juanmi, thus giving his team the win.

Both Barcelona and Real Madrid suffered in their respective semi-finals in the Supercopa de Espana. Ironically, both teams qualified for the next round on penalties after failing to score a winner even in extra time.

On Sunday, the world will be treated to an El Clasico final at King Fahd International Stadium to decide the champion of the Spanish Super Cup. Both Barcelona and Real Madrid are far from their best, but their equally poor form sets up an evenly-matched clash that will be hard-fought.

Xavi is yet to win a trophy as the manager of Barcelona. For him to win his first title by beating Real Madrid in the final would be a fairytale.

Carlo Ancelotti’s side will be without the services of Aurelien Tchouameni, David Alaba, and Lucas Vazquez. Clearly, this is the Catalans’ best chance of tasting silverware and boosting their confidence.

The last time the two sides faced off, Los Blancos romped to a dominant 3-1 victory. Revenge will be on the minds of every Blaugrana player on Sunday, and they must come out all guns blazing.