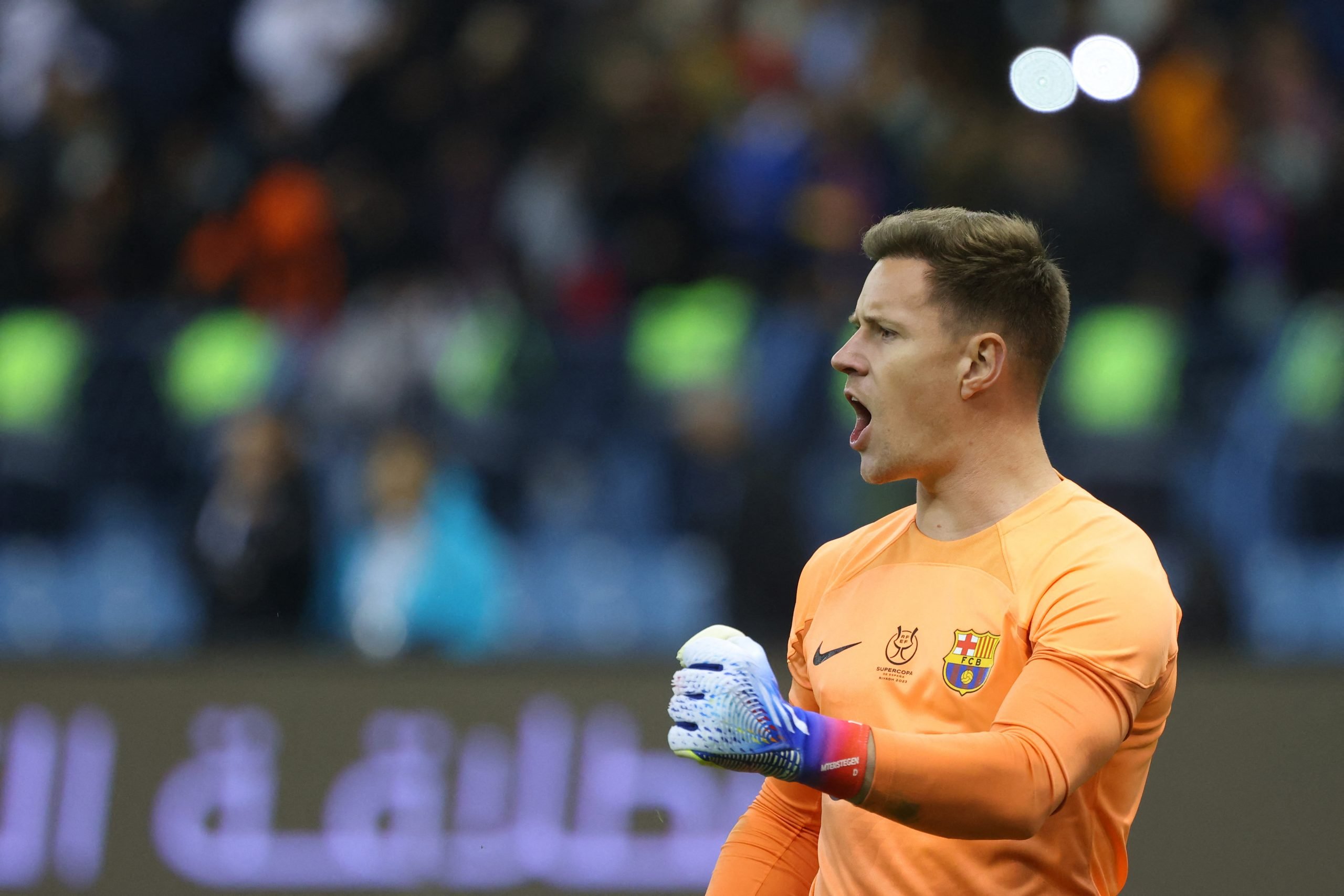 Barcelona took on Real Betis in their first game of the Supercopa de Espana on Thursday night at King Abdullah Sports Complex. The La Liga leaders were coming off a big win over Atletico Madrid at the weekend, albeit not as convincing as they would have wished.

Eyeing his first trophy as the manager of the club, Xavi made some big changes to his starting lineup for the night.

Marc-Andre Ter Stegen started in goal with a special central defence pairing of Ronald Araujo and Jules Kounde. Sergi Roberto filled in at right-back while Jordi Alba started on the left side.

Pedri, Gavi and Frenkie de Jong were the chosen midfield three on the night. In the attack, Robert Lewandowski returned to action in place of Ansu Fati. Ousmane Dembele and Raphinha completed the lineup on the left and right wings, respectively.

The game began with the Catalans on the front foot. Xavi Hernandez’s men immediately put Los Verdiblancos under pressure with two opportunities in the opening five minutes courtesy of a high press and superior tempo.

Over the next ten minutes, Robert Lewandowski found himself at the receiving end of three half-chances but failed to connect with the ball on all three occasions.

Ter Stegen came up with a vital interception in the 20th minute to stop a poor clearance by Sergi Roberto that seemed on its way into the goal. Less than a minute later, Ronald Araujo make a last-ditch tackle on the edge of the area to cut off a dangerous Real Betis chance.

Barcelona struck right back in the 22nd minute and found the back of the net.

The move began with Raphinha on the right wing, who took a couple of touches before venturing forward. The Brazilian sent a cross in front of Claudio Bravo’s goal and a well-timed diving finish by Pedri helped the ball across the line. However, it was ruled offside in a marginal decision.

The half-hour mark saw Betis create a massive threat from a corner as Pezzella fired a low header goal-wards. Only a magical save by Barcelona’s German shot-stopper kept the scoresheet level.

The pressure on the Blaugranas slowly increased in the next phase of the game. Kounde and Roberto had to both make vital blocks to deny their opponents a goal in the 32nd and 33rd minute respectively, as Real Betis turned up the heat.

Lewy gave his side the lead in the 40th minute at the end of a lethal counterattack stemming from Pedri’s long ball. Ousmane Dembele received the aforementioned pass and dribbled forward to the edge of the area before finding the Polish International on the other side. The striker had his first shot blocked by Felipe, but kept his calm and rolled the deflected ball into the goal.

Ter Stegen was forced to make two more world-class saves in the final minute of the first half and did well to deny Luiz Henrique. At half-time, it was Barcelona with a slender one-goal lead.

The second half began with another massive chance for Lewandowski that he could not get onto the end of. The steam seemed to fizzle out in the next 15 minutes, with neither side creating any massive threat, but it was always clear that Barcelona were the superior side.

Xavi made two changes in the 62nd minute, bringing on Sergio Busquets and Ferran Torres for Frenkie de Jong and Ousmane Dembele respectively.

The game then slowed down with a slight momentum shift in favour of the Verdiblancos. Though Betis saw relatively more possession, the Catalans held their own in defence and threatened on the counter.

Manuel Pellegrini’s side got their equaliser in the 77th minute through a well-worked attacking combination. Henrique’s decision to hold onto the ball and roll it to Fekir’s path when in the Catalan box threw the defence into jeopardy, opening the doors for the latter to guide the ball into the goal.

Lewandowski scored an emphatic goal in the 82nd minute but had his effort ruled out by VAR. At the other end, Ter Stegen was forced to make a massive save to deny the Spanish opposition. Ansu Fati replaced Raphinha.

With the score tied at 1-1, the tie headed to extra time.

Three minutes into extra time, Ansu Fati fired Barcelona back into the lead after a poor free-kick clearance by Betis. After a high clearance, the youngster produced one of the goals of the season to beat Bravo with a thunderous volley.

Almost unbelievably, Betis equalised one more time in the 102nd minute through Loren Moron. Receiving the ball from Henrique, the Spaniard smartly flicked the ball past the German keeper to restore parity on the scoreboard.

Fati had a late chance to seal the game but could not convert Torres’ cross despite his best efforts in the 117th minute. Andres Guardado received his marching orders seconds later for a harsh challenge on Kessie.

The scoreboard at the end of extra time read 2-2, sending the game to penalties.

In the following shootout, Ter Stegen saved both Juanmi and William Carvalho’s spot kicks and took his side through to the final of the Spanish Supercup. It will be Barcelona vs Real Madrid on Sunday night.