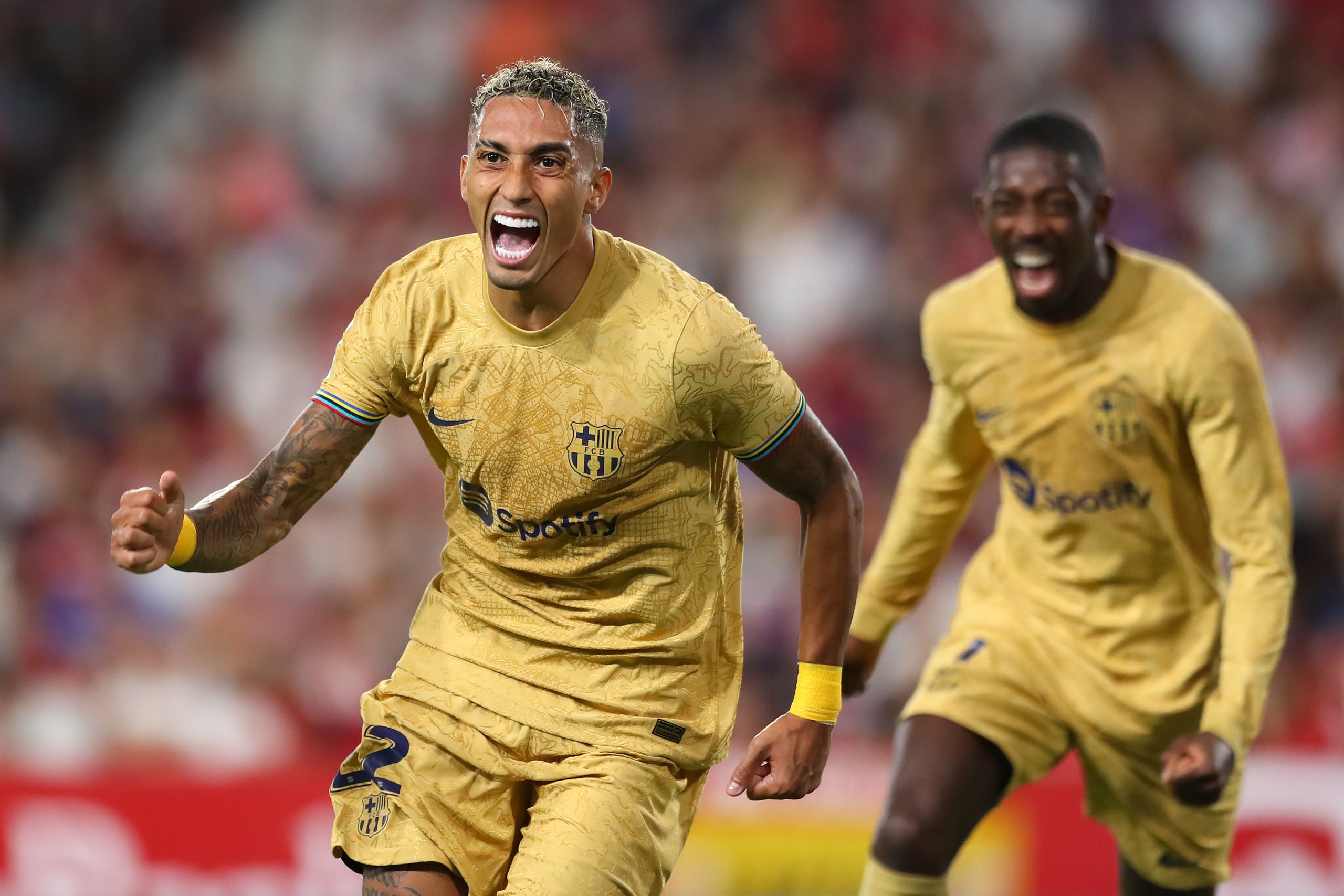 Barcelona continued their unbeaten start to the new season as they defeated Sevilla 0-3 away from home at the Ramon Sanchez Pizjuan on Saturday night.

Raphinha opened the scoring for Barcelona on the night midway through the first half before Robert Lewandowski added another goal to his fast-growing tally in La Liga in the 36th minute, with fellow new signing Jules Kounde providing the assist.

Five minutes into the second period, Barça made it 3-0 from an unlikely source as Eric Garcia found the back of the net to kill off the game. The victory takes Xavi Hernandez’s men to the second spot in the La Liga table, two points below leaders Real Madrid.

Raphinha, who scored his first goal for Barcelona after joining from Leeds this past summer, spoke to the media after the game and hailed the victory saying:

“It was a very difficult game, but our way of playing has been key to achieving victory. Barça always have to have the ball, and if that’s the case, we can score many goals. We are happy for the victory, but we have to keep going.”

Talking about his adaptation at Barcelona, he added: “On a personal level I’m also very happy, my teammates have helped me a lot to adapt and we have to continue working. I dedicate the goal to my family and my wife in particular, who support me a lot.”

On his first goal for the Catalan giants, Raphinha said: “My goal was very important. Hopefully, I’ll score many more. This is one of my first goals scored from a header.”

On playing with stars like Lewandowski and Ousmane Dembele, he said: “Before, I used to watch them on TV. Now I play here with them, and I can see their great quality.”

Speaking about Barcelona’s prospects for the season, the Brazilian international added: “I think the fans are very optimistic. We have a great staff and players. A big season awaits us.”

Barcelona goalkeeper Marc-Andre ter Stegen kept his third clean sheet in four games in 2022/23 La Liga. The German international has stepped up for Barça this term after some iffy displays not very long ago.

But he also believes that an improved defence in front of him is also helping his cause, as he said: “I feel good. The defensive line is very important, and we’re doing a great job. We have to keep a clean sheet in every match. It’s our job.”

“Things have changed. The defensive system is different and that helps me. We’re working super well as a team,” he further added.

Talking about the Sevilla win, he said: “We knew they were going start with great strength and we had to deal with that.”

Opening up on his own form this year, ter Stegen said: “I think that 2022 has been a good year for me. I’m happy and we have to continue like this.”