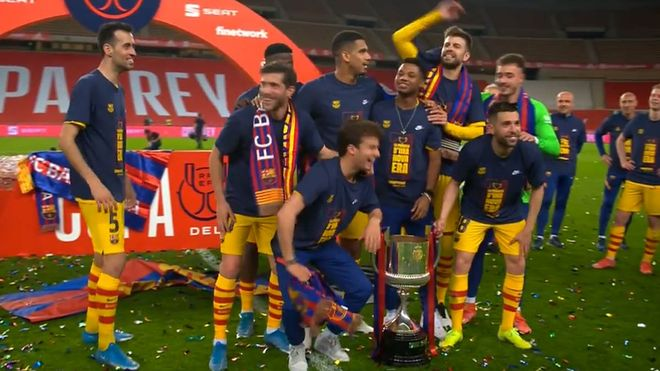 Following Barça’s impressive 4-0 victory in the Copa del Rey Final, the players celebrated by taking photos with their teammates. One included a group of La Masía products–Barcelona’s fabled youth academy–and Gerard Pique jokingly pushed Dembele out of the photo, saying: “Get out of here, you costed us too much.”

Standing with Pique in the photo were Sergio Busquets, Sergi Roberto, Jordi Alba, Ansu Fati, Ronald Araujo, Riqui Puig, Ilaix Moriba, and Arnau Tenas. La Masía has been a source of pride for culés for years and with a talented new crop of youngsters, the future is looking bright.

The joke was in reference to, of course, the high transfer fee (over 100 million euros) Barcelona paid for Dembele in 2017. The Frenchman has had a rough time at the club over the years but he is undoubtedly in the midst of his best season.

Dembele has seemingly gotten over his injury bug and appeared 38 times for the Blaugrana, tallying ten goals and four assists. His resurgence has brought the team much-needed dynamism and explosiveness.

Pique’s season has been marred by injuries, but his performance in the final was stellar. His passing and distribution were excellent, and he consistently closed down Athletic Bilbao’s biggest threat: Iñaki Williams.

Barça’s 4-0 victory over Bilbao gave the Catalans their first trophy in two years, and the performance they put on in the final was worthy of champions. It took them an hour to finally break down Bilbao, but the floodgates opened as they scored four goals in 12 minutes.

Looking ahead, the squad will do everything they can to win La Liga. On Thursday, they return to the Camp Nou to play Getafe.