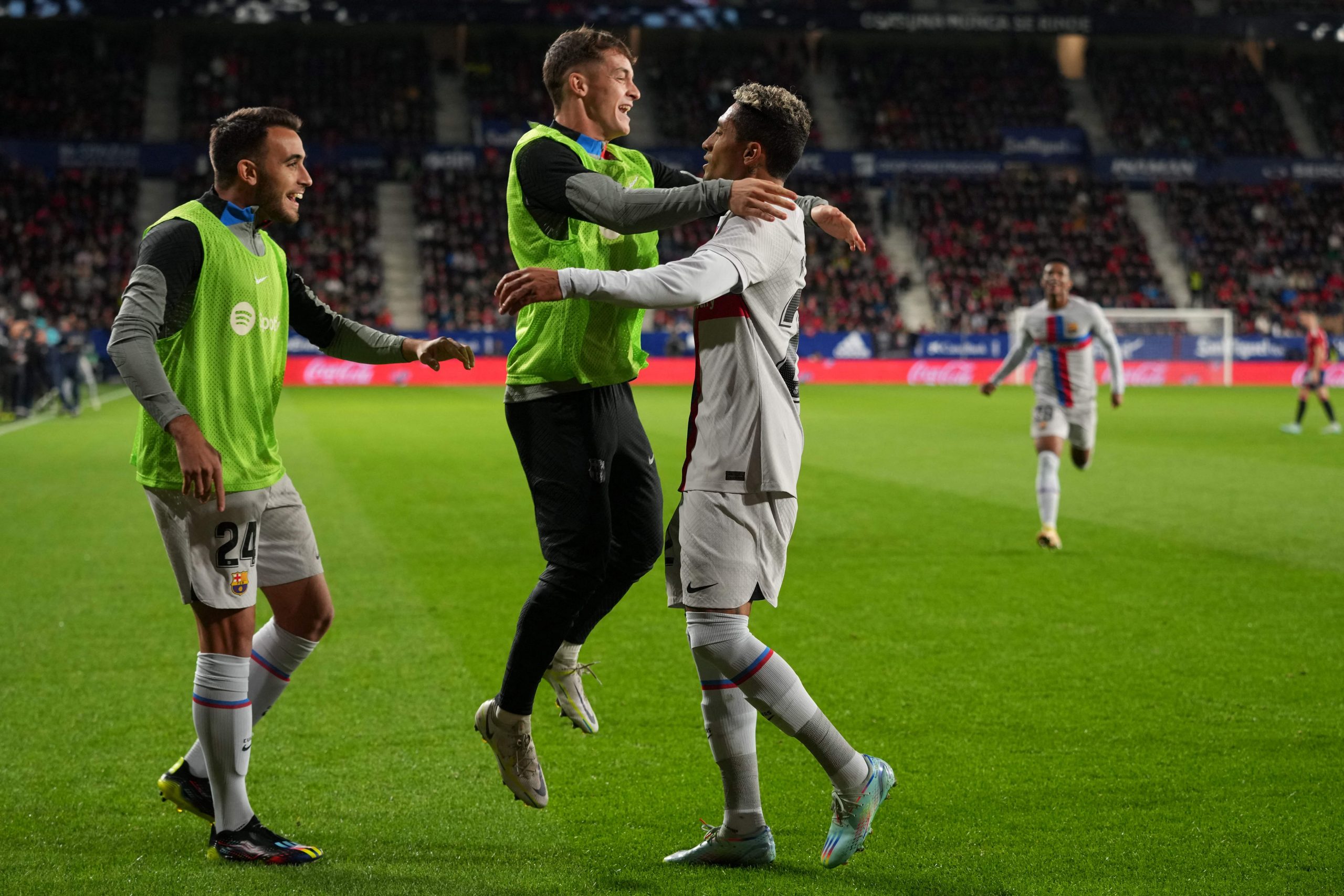 Following Real Madrid’s loss against Rayo Vallecano yesterday night, Barcelona had the chance to go two (or more) points clear on top of La Liga with a win against Osasuna tonight.

The game did not start ideally for Barça, though, as David Garcia opened the scoring from a corner in the 6th minute – albeit rather controversially.

From that point on, Xavi had to pull a special rabbit out of his hat to bring Barcelona back into the game.

Two minutes into the second 45, Barcelona got an equaliser courtesy of Pedri, who timed his run into the box to perfection to collect a rebound.

In the 85th minute, then, super-sub Raphinha executed the game with one of the best finishes of his life, lobbing the Osasuna goalkeeper with a header.

This is arguably one of Barcelona’s best games of the season – the team came through under dire circumstances, proving they have what it takes to win La Liga.

Could not do anything about the goal, but made an impressive save in the second half to stop Osasuna’s potential winner.

Another incredible performance from Balde, who has undoubtedly been Barcelona’s breakthrough star this season. Made some solid line-breaking runs from deep, and kept Avila in check whenever possible.

Can’t be blamed for the goal, but did not have an easy time against Osasuna’s high press and counter-attacks.

Was clearly fouled in the box for Osasuna’s goal, and did largely well after that, especially under pressure.

A shot-creating machine, Alba was impressive as ever in attack, and should be credited for Barcelona’s goal.

Pedri was the beating heart of Barcelona’s attack today in multiple ways, and got a well-deserved equaliser to show for his efforts.

An absolute horrorclass, it’s difficult to intellectualise why Busquets continues to start for Barça. He can be blamed for the goal conceded in more ways than one, and his terrible lack of awareness almost led to another minutes later.

De Jong has picked up a good pace of form ahead of the World Cup. Was arguably the man of the match tonight, creating multiple chances from midfield. Assisted Raphinha’s winner with an absolute sensational through ball – while playing in central defence, no less.

Mostly toothless in attack, but cannot be blamed much, especially since Barça were playing without a focal point.

Extremely careless from Lewandowski, who should not have, in any way, shape, or form, gone for that header that earned him a second yellow.

Made some good runs into the box, and was nearly awarded with a goal. Had to play as the furthest man forward without Lewandowski, and with little to no service no less.

Instantly increased the tempo of the game, coming into midfield. Helped Barcelona maintain the three points, too, with incredible ball-winning. Made an incredible diving header clearance and winner in injury time, which were celebrated as a winner.

Was clearly pumped coming into the game as a sub, and got his award through a clever chipped header. Then made a coursing run into the box in the last two minutes that helped maintain possession.

Wanted to make a difference, and had the right ideas, attempting a few courageous moves. None quite came off, though.